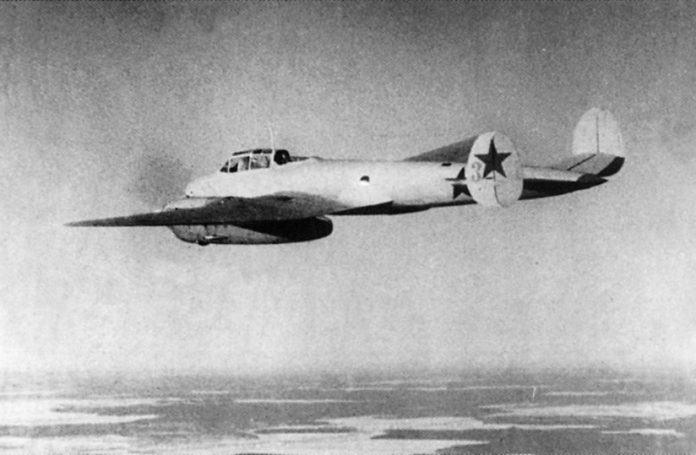 A very long time, I confess, I was selected for this aircraft. no wonder, of Pe-3 is written very, very little. If there is a book on the Pe-2 - in the best case, Pe-3 will pay the head. allegedly, It was. If the article - enough for a few sentences. But books and more or less serious studies there.

true, there is a hint of a ray of light in the darkness, It is the work of Andrew Morkovkina. When the book is finished, sure, it will bring pleasure to all lovers of our flying history.

We'll talk about this very controversial plane not as detailed, like Morkovkina, but references to the chapters will be ready at the end of material, so that, anyone interested, - there is a lot of useful and detailed information.

Not only for someone is secret information, that was the forerunner of a fighter "100", which is planned as a high-altitude interceptor. However, it turned out, that the fighter immediately converted into a dive bomber, and I went into service as the aircraft Pe-2.

However, in summer 1941 of the year, when the Germans were able to put air strikes on Moscow, about the plane-precursor remembered again.

The Germans were not fools, and well understood, that the attack on Moscow in the afternoon - it was suicide. Moscow air defense they appreciated very quickly. But at night it was possible to try to impose a fight on his own terms.

The first attack ended mildly, not very well. At first, damage was minimal, Secondly, a loss 20 or 22 aircraft - it krutovato for such operation, because it involved was about two hundred aircraft.

But then the Luftwaffe began to work in small groups, and began the complexity of our.

group 6-9 aircraft to detect much more difficult, than the crowd of several hundred, It's clear. Single bomber easier to jump out of the spotlight, fighters and harder to find.

Considering, that the full "night-light," we did not have, the task was very difficult. Often, conventional fighters do not have time to climb and catch the bomber.

The logical solution was if not the creation of night fighter, what in 1941 , it was simply impossible for several reasons, then at least loitering interceptor, which was able to cover a certain area for a long time and attack the bombers when they appear.

Here and remembered, that Pe-2 was originally something was just such a plane.

AND 2 August 1941 g. decision of the State Defense Committee of the design group in. M. Petlyakova was tasked with creating heavy fighter. Deadline… 6 August 1941 g.

All right, rework dive bomber back to heavy fighter was given 4 day.

But as usual, with the task of the Party and government in KB Petlyakova coped. And if you could not have done, I think, all over again would be in the next "sharaga". Created specifically for the occasion.

but given, that the enemy was already on the outskirts of the capital, no one had to adjust.

Drawings are not made, all the improvements were in place. Battle farm. The main objective was to increase completions range due to facilitate the construction and increasing the amount of fuel, and strengthen the arms.

Increase in the amount of fuel 700 l managed by installing additional tanks: one to two bomb bay and the cockpit in place arrow. Oval portholes and sunroof sewed, lower machine gun removed. But the lower hatch left.

With regards to the replacement station, There are several opinions. Morkovkin considers, everything is correct, as the Pe-3 was not a long-range escort fighter, the long-range radio and radiopolukompas He did not need. This can be read in it.

Totally disagree with him. The plane was set range 2000+ km, respectively, combat radius was obtained somewhere in the neighborhood 700-800 km.

The communication range of the aircraft to the ground using the RSI-4 was the most 100-110 km, and from other aircraft, and even less - 50-60 km. Plus relief structure by removing radiopolukompasa.

Honestly, as it planned to direct and adjust a night fighter, I do not understand. In fact, it turned out some blind poke in the space in the hope glare of enemy prozhektoristami.

Strengthening arms turned rated. Or rather - the minimum. BK added one gun at the bow and one at a fixed tail ShKAS install (instead of the arrow were now fuel tanks).

As a result, the plane had two offensive weapons BC gun (ammunition 150 rounds on the barrel) and one ShKAS (750 rounds) and two defensive ShKAS, one of which is serviced by a navigator, and the second was immovably fixed.

Arming was Bf.110S by weight second volley and a half times stronger due to the 20 mm gun and four caliber machine guns, 7.92 mm.

And with the fall 1941 of the year, when the sky appeared Bf.110E with more powerful engines DB601E, the 110th became faster in all ranges of heights.

Compare the same with the older time developing the American P-38 at all sad. The battery of 20 mm guns and machine guns four 12.7mm, higher speed and - Armor! Which at the Pe-3 did not exist.

It is appropriate to recall once again created Petlyakov VI-100, "Weave", on the basis of which it was made bomber Pe-2. MI-100 had initially offensive weapons 2 ShVAK gun 20 mm ammunition with 300 shells on the trunk and 2 ShKAS gun 7.62mm ammunition with 900 rounds.

Pe-3 looks at the background of a very pale. But it charges faster rework. After all, Pe-3 made on the basis of the Pe-2, not YOU 100, and for dive bomber just a large area of ​​glazing bow, which ensures easy orientation and aiming, It was very important.

Naturally, haste and 4 day at all is simply not allowed to redesign the nose of the aircraft and accomodate more powerful weapons. Testers from the Air Force Institute noted in reports these shortcomings: weak arms, no reservations, a weak radio station.

It recommended a single 20 mm gun ShVAK, and a machine gun in the navigator 7.62mm caliber to replace a heavy Berezina.

But it was not all.

When the shooting of offensive guns revealed, that perspex fuselage nose can not withstand the pressure of muzzle gases and collapses. sleeves, emitted by firing in the air, hit the front wing skin and a lower surface of the fuselage. And at night firing shots flame blind crew, and sight grid becomes visible, I had to aim for tracers.

Changes have been made immediately. On the trunks of machine guns installed fire extinguishers, Plexiglas nose was replaced by aluminum. Liner began to gather together with units in special boxes-gilzosborniki.

Bili made blind at the bottom glazing, as it turned out, that blind searchlight crew. Pe-3 for the first time in the Soviet Union installed and tested UV lights in the cockpit and phosphorescent compositions on the scales of devices.

But the plane was needed, so with tears, but in the series it launched.

Developed and tactics application Pe-3. The plane began to come into service parts, where flight crews were trained in the use of Pe-2 (95-and sbap, eg), respectively, pilots were, what to expect from a fighter based on the Pe-2.

Various methods have been proposed combat use Pe-3 - from loitering pairs as peculiar observation points, destroying some enemy vehicles and to immediately call in reinforcements in case of the approach of large groups of enemy aircraft, up of leading and guiding the radio single-engine fighters. Permitting radio, naturally.

In the same 95-m IAP field finalized arms Pe-3, and several cars got 20-mm cannon and machine gun ShVAK BT instead ShKAS in navigator. There were cases in the field of aircraft conversion scouts, by installation of the aerial cameras AFA-B.

Pe-3 served in the Moscow air defense system until March 1942 g. curious, that the water from the radiators do not merge even in the frosty night, because the regiment was considered a fighter, and the team "on the rise" could arrive at any moment.

but, It had only to throw the Germans back from Moscow, and Pe-3 began to engage in bombing enemy troops, good, bomb racks on the external load is not dismantled.

In fact, to 1943 , all ne-3, remaining in service, They were transferred to the training aircraft and given to flying school, training personnel for Pe-2. Sporadically employed scouts with aerial cameras.

The characteristics of Pe-3:

What is an "encore"? there is an opinion, it is the English abbreviation «Best Item in Slot (Best in Slot)"- which means" the best thing on the characteristics of ".

It seems logical because, but most are inclined to, that "bis" - a Russian transcription of the word "bis of the", which means "second version". Latin bis - twice.

I used this marking to denote a new version of an existing product, If, for some reason, do not introduce a new model designation.

Fighter Pe-3bis was born at the end of treatment the commander of the 95th IAP Pestova colonel and squadron commander of the same regiment captain Zhatkova directly to the secretary of the Central Committee of the CPSU(b) Malenkov criticized Pe-3. As a Communist Communist.

Zhatkov painted in great detail all the shortcomings of the Pe-3, duplicating the report of the Air Force Institute of experts. Colonel Pestov criticized the complete lack of protection from enemy aircraft defensive fire.

According to pilots, The fighter should urgently establish the armor protection bow, ShVAK gun and replaced with an upper installation navigator ShKAS on heavy machine gun turret with WT.

Its appeal Zhatkov ended with the words: "Our pilots are ready to fight on any machine, including this, but we are too expensive now, people and machines, and for a fraction of the enemy blood does not make sense to sacrifice ".

Malenkov, instead of, to plant, tortured and shot Zhatkova and Pestova, criticism of the Soviet technique, He demanded by the Air Force to urgently investigate the situation and report.

There is still the pilots of the 40th SBAP, It has also begun to re on the plane, address in KB plant №39, where Pe-produced 3, it is also an expression of extreme displeasure.

So after the roar of Malenkov should eliminate shortcomings, and address urgent. Developing proposals instructed CB factory №39 and the result was an experienced improved aircraft Pe-3bis. 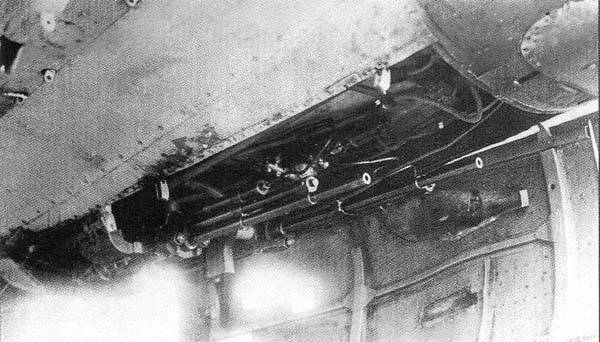 The speed at the height reduced to 527 kmh, but increased velocity at the ground to 448 kmh. Automatic slats somewhat simplified piloting technique, especially on landing, For Pe-3 inherited in this regard from the Pe-2 is not the best features.

What can be said about the plane? He was, he fought. Released Phe and Phe-3-3 bis generally about 360 units, so that in the long run, This drop in the bucket for the fighter.

Especially, that Pe-3 fought mostly not as such. only about 50 machines were used as fighters, others fought scouts, bombers, spotters, training aircraft.

By late summer, 1944 years in the Air Force Red Army there were no more 30 copies of Pe-3 different versions, and none of the regiment was not armed them completely.

Basically, planes were used for visual and photographic reconnaissance. Still Pe-3 used by the Air Force SF (95-and PAI, 28-I ORAE).

Here, perhaps, valuable work, which were produced in Irkutsk to bring the car to the mind. Pe-3 and has not brought, recognize, but many things, which were applied for the first time, We continued to work on other aircraft.