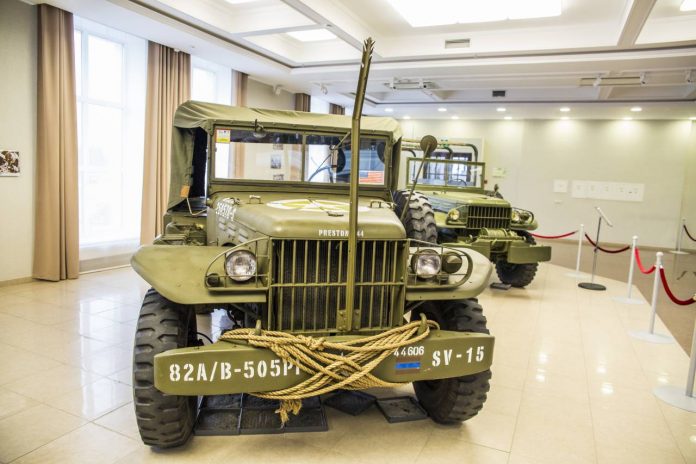 Yes, as promised, We begin a series of analytical stories about the technique, received by Lend-Lease, and comparison of this technique with the, that we had.

But at the very beginning, faced with a huge challenge, immediately recognized, that does not always get to compare, because often we counterparts, Unfortunately, did not have. This is especially true theme, that we decided to start our story. With the car.

Yes, generally, not a secret, autostructure that we were all very sad at all times. even today. If not concern "Renault-Nissan", began to produce their own models, so would be in the "bowl" and went.

In the 30s it was no better. In total we had three autostructure support: Moscow (ZIS), Nizhny Novgorod (GAS) and Yaroslavl. That was - that was, had the, that had. Another question, the cars, Made in the USSR, Unfortunately, it is very difficult to compare with those, that was issued the same "Big Three" in Detroit.

One evidence of this is our today's hero, «Dodge» (forgive us Russian spelling), bore the nickname of "three-quarters". «Dodge» WC-51. 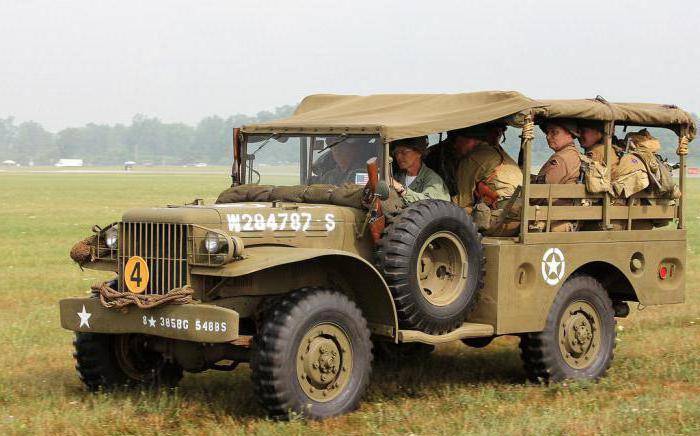 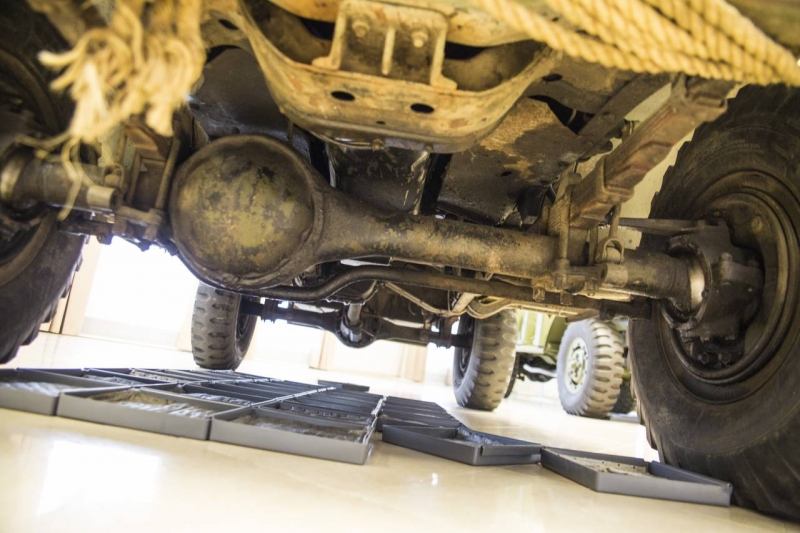 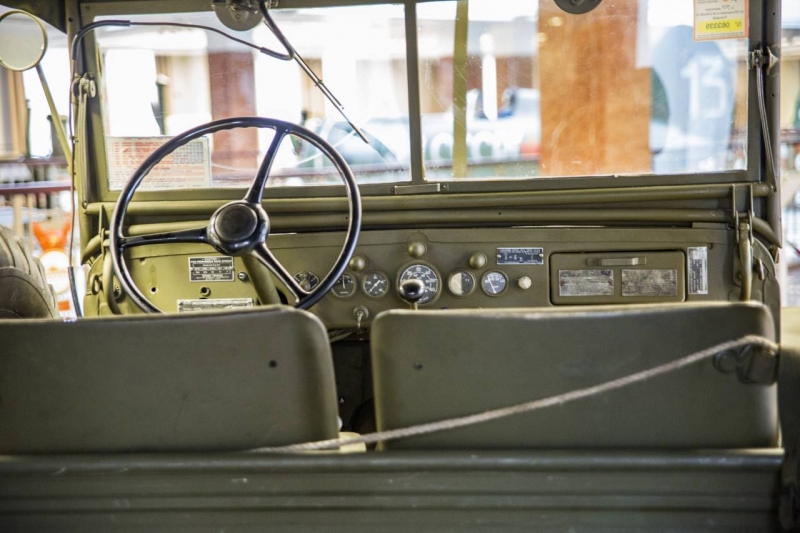 Overall drawn a "jock on steroids", ready for anything.

It must be something to steal? No problem. Mortar, anti-tank gun 45 mm, even divizionka 76mm - not a problem. filch. Kitchen close to the best throw? ha! Together with the supply of food and cook. 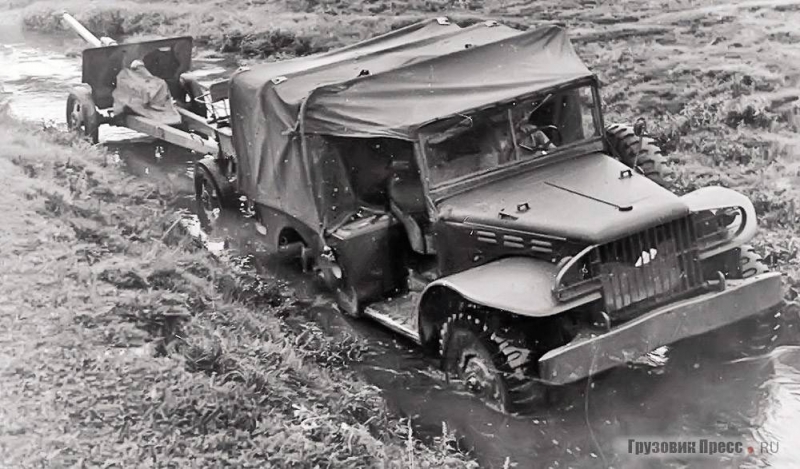 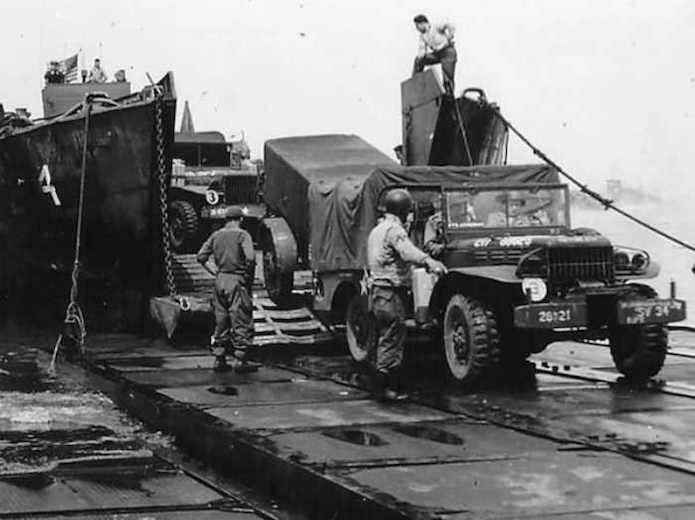 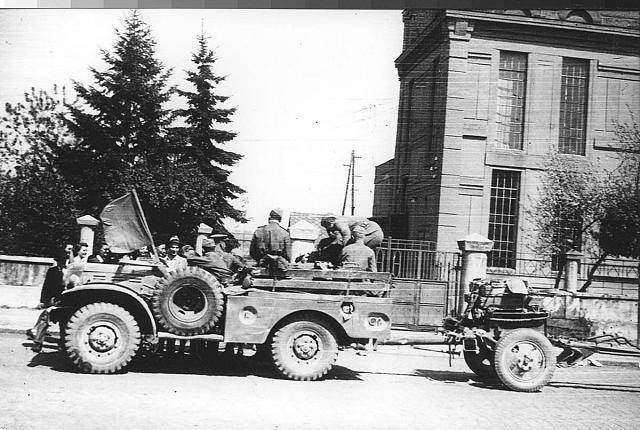 There is an interesting additional feature. Paul SUV has five ribs and adapted for rack mounting, designed for small-caliber gun (to 37 mm inclusive) or a heavy machine gun. This American "browning" of 12,7 mm and more. 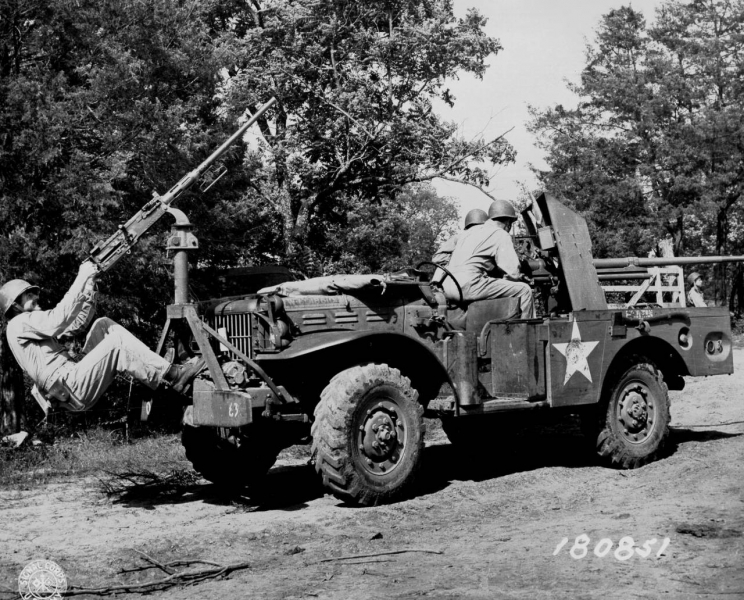 I plant an American electric starter. The six-cylinder engine is pretty traction and has excellent power at the time.

The main axle rear, Front connected as appropriate lever next to the "handbrake".

Synchronizers on the gearbox? Come on, this war machine! The easier and cheaper, yet it is better. Because no synchronizers, but for the Soviet people, not spoiled novelties, double squeezing - business as usual.

No shift stage, but engine power allows even wade through mud Russian. A can start from the second, engine and is not endure.

Knowledgeable people reenactment of environmental claim, that this bull is very well controlled, despite the absence of whatever power steering. And generally speaking, weaklings on the war is not the place, especially behind the wheel of such a vehicle that's for real, "peppers".

Wheelbase, so to speak, medium size, It makes it possible to properly and quickly turn around in small areas.

Hydraulic brakes, tut producers did not poskupilisʹ. the main thing, towing is not to slow down "dead ends", incident, When gun or mortar disrupted with drawbar and the frame themselves in the body. not deadly, of course, but nonetheless.

Noticed: the passenger wiper with a manual drive. 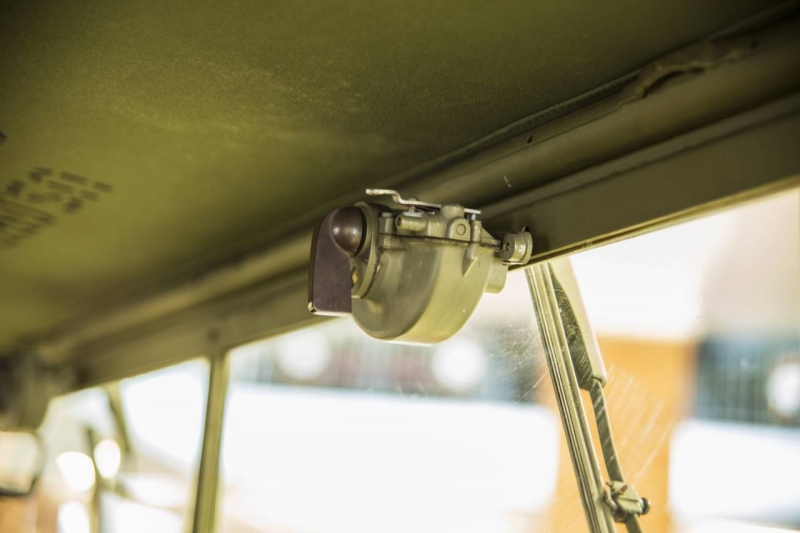 That is, it is necessary to twist the arm up and down the drive "wiper". But the driver's side - the miracle of the American automobile industry: vacuum driven by the engine! 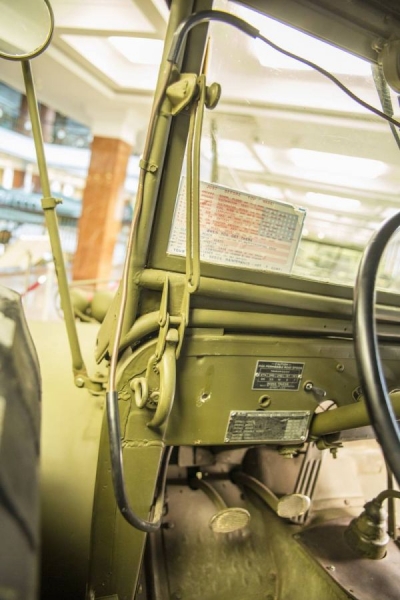 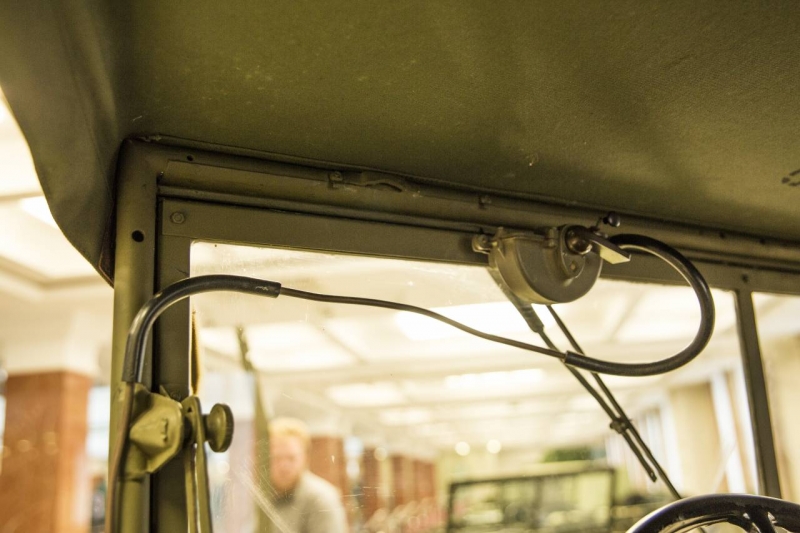 The higher the engine speed, the faster the "janitor" driver.

In fact for WC—51 and subsequent modifications was only one drawback: nacelle. Our winter it was not unpleasant. That year and, in a smoke or a strong wind in the Rostov steppes, Open those winds cabin - a dubious pleasure. 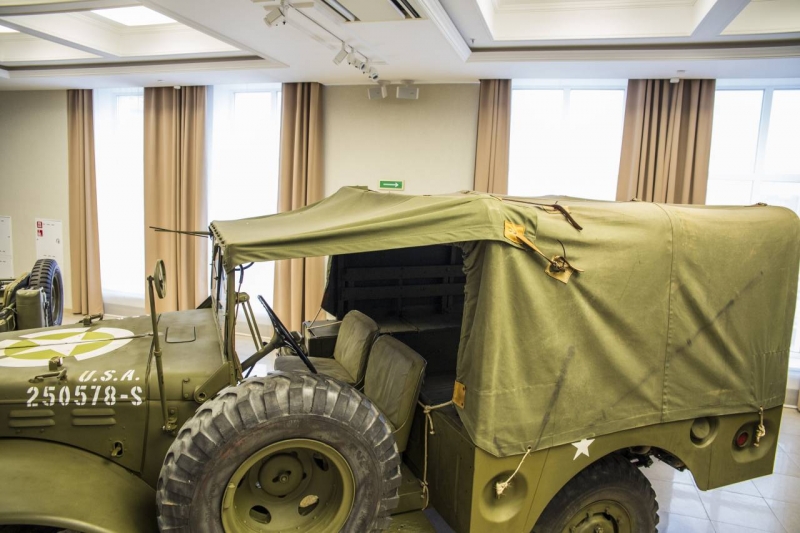 I translate: no problem. And trenchant Technology visited.

And now the figure, that crosses all the comparisons and comparisons.

Jeep overgrown, as it is, "Gone". Tractor antitank guns, as he originally set, He became generally carry everything, from reconnaissance patrol to kitchens and officers of. 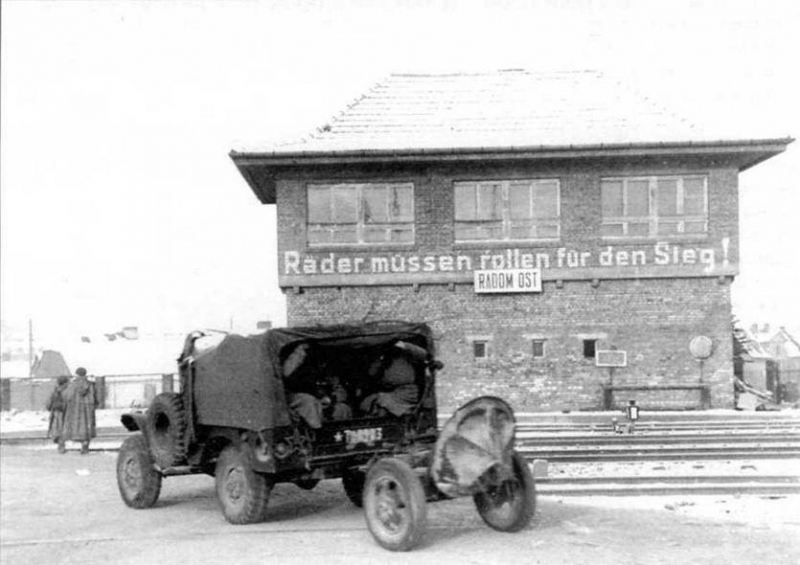 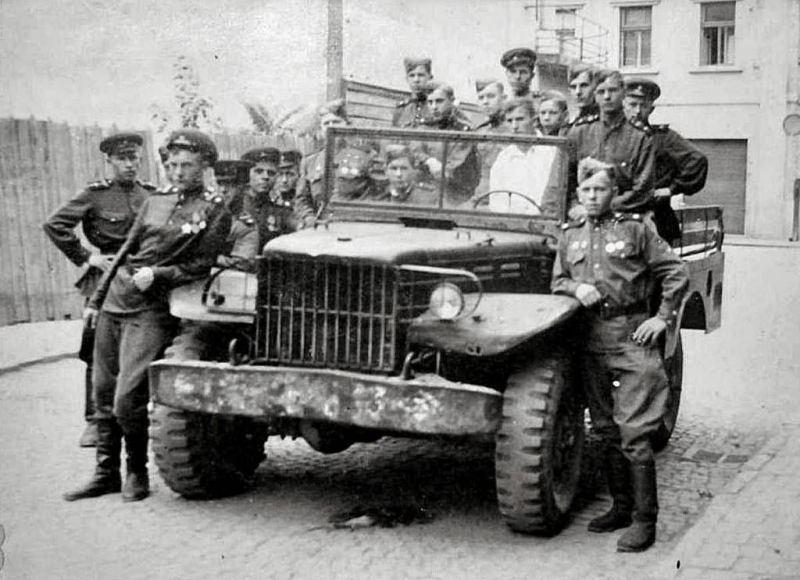 most unpleasant, that he was really something and not compare with what.

The class is best suited GAZ-4. 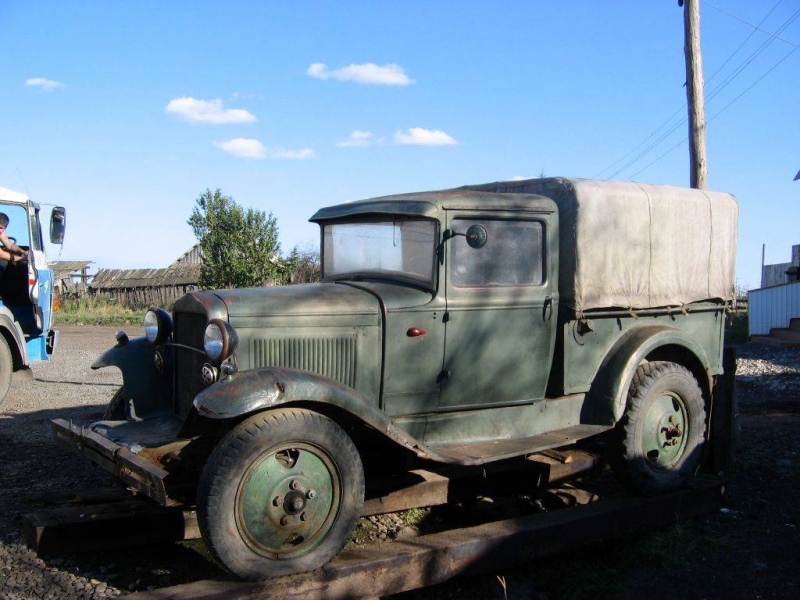 This pick-up, all made on the same platform GAZ-A / «Ford-A", issued in series 10,5 thousand cars.

But GAZ-4 lost in the main - load capacity (500 kg against 750 in "Dodge") and patency. In terms of terrain - very lost. American (although GAZ-A is not really something you can call the Soviet) swallowed by "Dodge" regularly ate twice as much gasoline, but I did not ask any questions on where and how to haul cargo hitched. Or loaded into the truck. 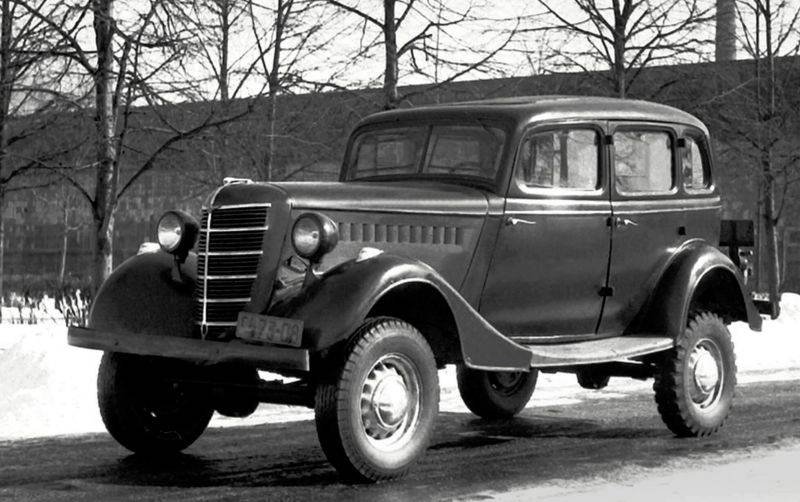 Yes, to cross this car had a full order. The only problem is, that all modifications of GAZ-61 was issued are no longer 200 pcs. Yes, the car was loved by Soviet commanders, GAZ-61 carried Voroshilov, workaday, Kulik, Tymoshenko, Shaposhnikov, Zhukov, Meretskov, Konev and Tuleneva.

And then the "Doji" and "Willys" came under the Lend-Lease, that filled the sector of light and medium-sized four-wheel drive vehicles of the Red Army. 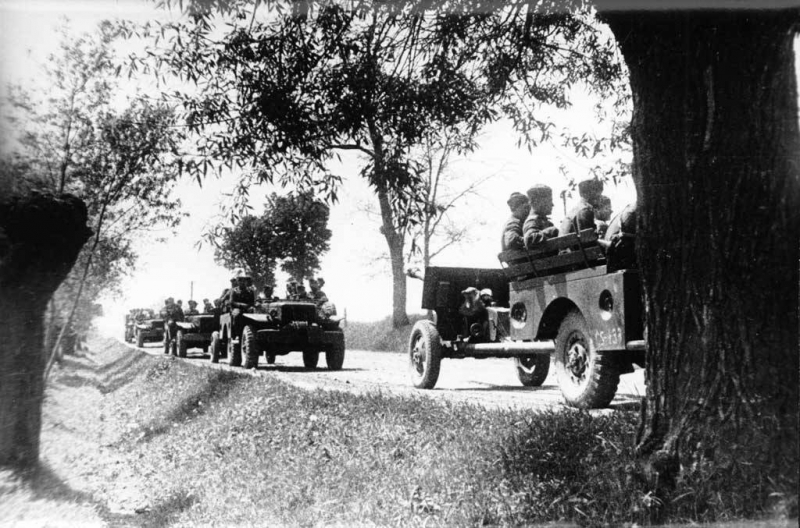 by the way, museums of 25 000 we have at the moment there are only 2 (!) Dodge WC-51. One at the Museum of Russian military history in Padikovo, the second - in the UMMC Military History Museum in the Upper Pyshma. In private collections of military history reenactors 51 minutes can also be found. But not often. others, as it appears, rOLLED years.

But his main work Dodge WC-51 is "excellent". I think, This would agree with me the great majority.