Su-37 - an experimental fourth generation super maneuverable fighter with canards (PGO) and engines with SWT. Created on the basis of the Su-27M. The first flight of the Su-37 engines with SWT held 2 April 1996 of the year. The only copy of the flight (factory code aircraft T10M-11, b / n 711), Built in the late 1993 of the year, He crashed in a test fly 19 December 2002 of the year, when it stood conventional engines without UHT for testing other systems. The program is terminated.

Parallel, taking into account the accumulated, to implement the program on the creation of the Su-35 engines AL-41F1S with UHT (first flight 19 February 2008 of the year, delivery of the first 12 aircraft 12 February 2014 of the year).

Work on the modernization of the Su-27M (T-10M) We started in accordance with the government decree on 29 December 1983 g. In parallel with the improvement of avionics and armament on the fighter, it was decided to implement a number of promising developments, in particular - the canards (PGO), digital EDSU, flight refueling system, etc.. 28 June 1988 g. the first flight of the prototype, a 1 April 1992 g. He flew the first Su-27M, assembled at the production plant in Komsomolsk-on-Amur. A total of nine KnAAPO Su-27M experimental series was built (T-10M-3… T-10M-12), including the "standard" for large series - T-10M-8. 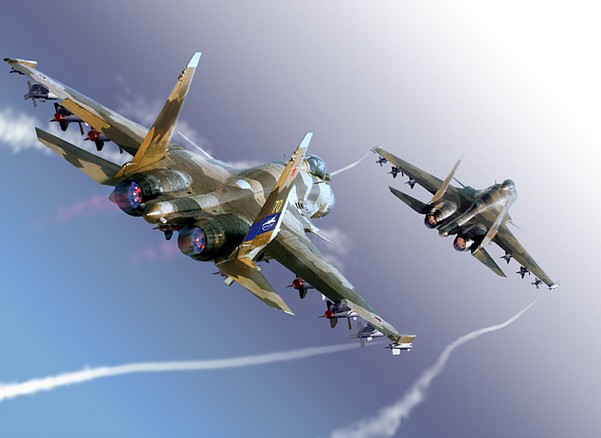 However, the beginning of series production due to lack of necessary funds from the customer's constantly postponed. In the mid-1990s, there was an obvious need for further improvement of the aircraft. It was decided to equip the Su-27M (export designation - Su-35) advanced phased array radar. At the same time we make a significant change in the field informatsionnoupravlyayuschee fighter cockpit: instead of the monochrome CRT indicators, it was decided to establish a more perfect color liquid crystal displays (work to establish production of domestic liquid crystal matrices have been deployed in the late 1990s.). N011M radar and new avionics perfected on T-10M-11 aircraft and T-10M-12 (the latest in a series of pilot, built in the 1994-1995 gg.).

Plane T-10M-11, built in 1994 city, at 1996 g. It was converted for testing the power plant with the UHT system, side control knob, Strain the throttle and the new field informatsionnoupravlyayuschego cabin (made using the color displays in the LCD). Origin Poleg modernized T-10M-11 (known as Su-37) took 2 April 1996 g. The only copy of the flight (b / n 711) He crashed in a test fly (while at the time of the accident on it were conventional engines, without UHT, and again he was one of the advanced Su-27M / T-10M), creating a discontinued program. 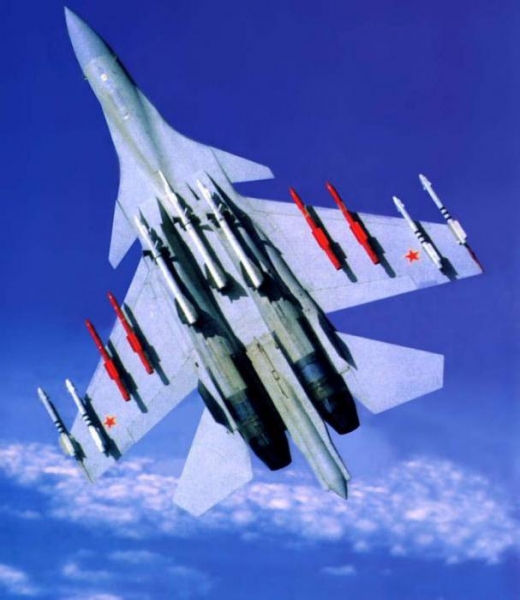 The main differences of the Su-37 “Terminator” by Su-27M

Airframe as a whole is similar to the Su-27, However, when creating a Su-27M and Su-37 used the new aluminum-lithium alloys, greatly expanded the use of composite materials. For aircraft designed a new wing with increased relative thickness, helps to place more fuel volume. 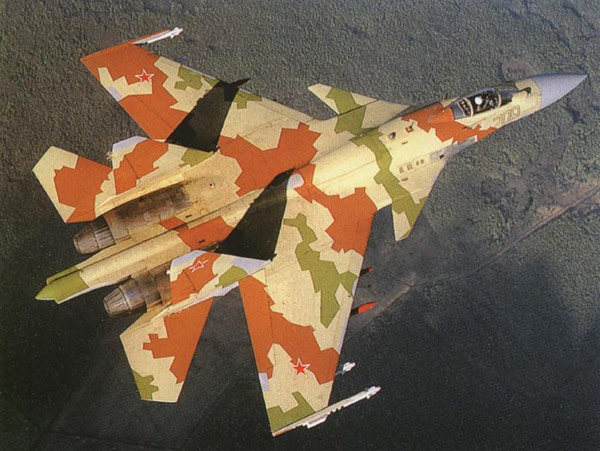 During the flight test aircraft Su-37 has demonstrated the unique maneuvering capabilities. It was first worked out new maneuvers, associated with access to extra large angles of attack and near-zero speed:

In other words, in close air Su-37 battle can practically turn "on site", while his opponent will have to make a U-turn. 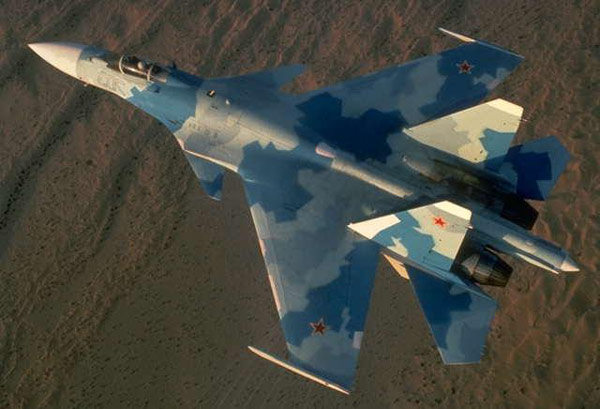 Technical solutions, realized in fighter design, offer:
possibility preemptive blows air according to any adversary (including stealth aircraft to); 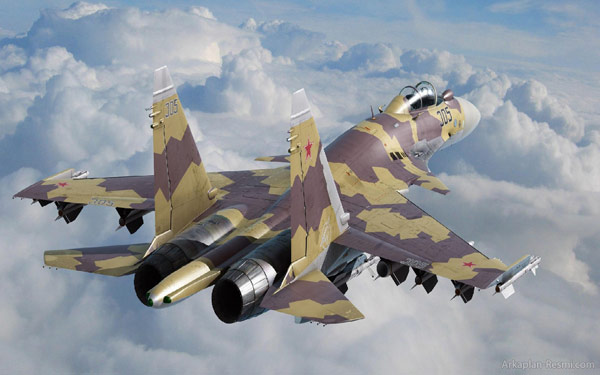 – possibility of applying warning air blows according to any adversary (including stealth aircraft to);
– multi-channel and algorithmic The security of all information and sighting systems;
– attack ground targets without entering the air defense zone short and medium range;
– low-altitude flight with rounding terrain;
– automated group actions of air and ground targets;
– counter radio-electronic and opto-electronic means enemy;
– automation of all stages of flight and combat employment;
– aerial refueling: the aircraft is equipped with a retractable rod toplivopriomnika. 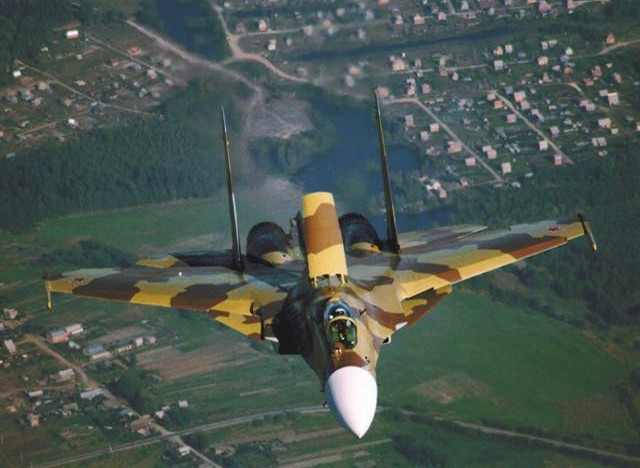 19 December 2002 years had passed a message to news agencies, that the Su-35 (already on Su-27M) crashed in 80 km from the aerodrome Ramenskoye. Test pilot Yury Vashchuk safely ejected.

Later, the news agency reported NEWSru.com, that was lost Su-37 aircraft with the tail number 711. This information contradicts the information, provided the head of the press service of the Defense Ministry, Colonel Nikolai Deryabin, which pointed to the Su-35 aircraft lost (already on Su-27M).

Confusion in messages, perhaps, It was caused by the fact, Su-37 that is a modification of the Su-27M (Su-35 - its unofficial name), on which engines are placed with UHT. And as UHT engines were removed at the time of the accident with the Su-37 and replaced with a serial AL-31F from the Su-27M, the, according to some experts, he was the Su-35 (Su-27M). 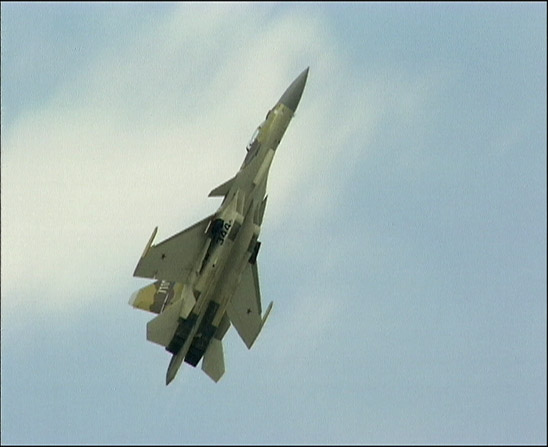 Performance characteristics of the Su-37 Terminator

The dimensions of the Su-37

Thrust-to-weight ratio of the Su-37

Range of flight of Su-37 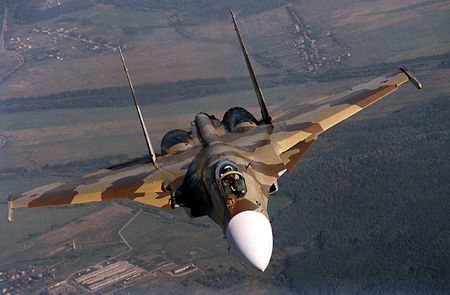 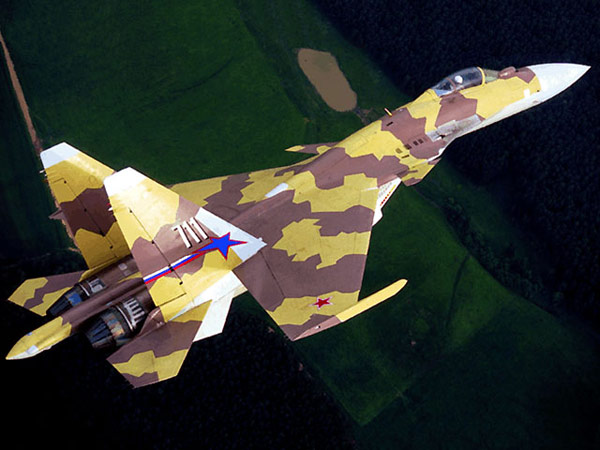 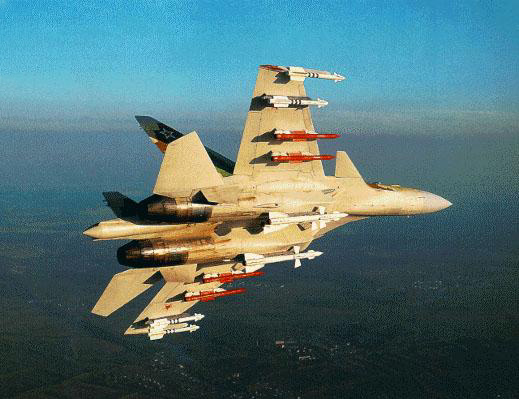