Russian concern “Uralvagonzavod” actually confirmed the receipt for study of two French Caesar self-propelled artillery mounts of 155-mm caliber captured in Ukraine, by posting in the comments on the TG channel of the French politician Régis Castelnau.

Castelnau had previously stated, that Russian troops captured two French self-propelled guns Caesar in Ukraine “in a good condition”. According to the politician, howitzers have already been sent to Russia, where they are carefully studied by Russian designers from the concern “Uralvagonzavod”. The Frenchman posted the corresponding entry in his TG channel, after which a post from the Russian concern appeared there, “who thanked” French President for howitzers supplied to Kyiv.

good afternoon, Mr. Regis. Please pass on our gratitude to President Macron for the gift of self-propelled guns. Equipment, of course, so is. Not that, that our “Msta -C”. But nevertheless, it is useful in the economy. send more – we understand- says in the entry. 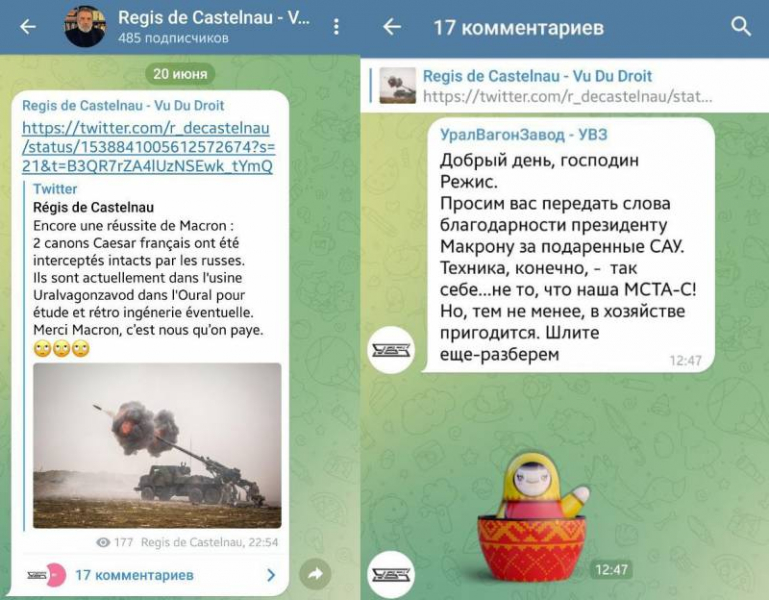 According open data, France put on Ukraine 18 ACS CAESAR in two batches. First of 12 howitzers entered service with the Armed Forces of Ukraine in early May, second of six already this month. French President Macron announced the delivery of the second batch.