Minister of Economy of Ukraine: Gasoline left in the country for a maximum of five days 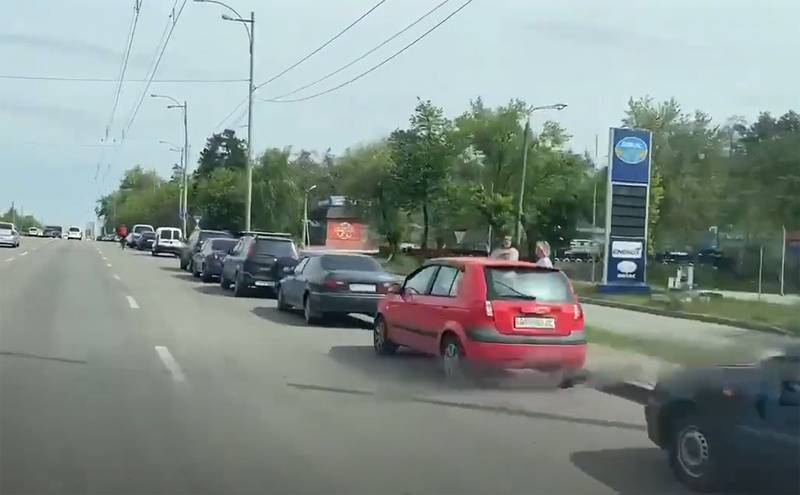 Mayor of Kyiv Vitaliy Klitschko and other representatives of the administration of the Ukrainian capital were literally bombarded with questions about, when will trade in motor fuel be normalized. As of today, the situation in Kyiv is as follows, that about 60% Filling stations of the city and suburbs no gasoline. In the best case, there is autogas and diesel fuel, at worst, gas stations are simply closed.

Kievans share videos online, in which they demonstrate the queue for those gas stations, where gasoline and diesel fuel are available. Often these are queues., that stretch not even hundreds of meters, and for kilometers. Drivers, who managed to get to the gas station, trying to fill a full tank and take it for the future - in canisters, however, in a container, besides the tank, most often at gas stations they do not pour fuel.

There was even a special kind of business in Ukrainian: selling places in line for gasoline, autogas and diesel fuel. reported, that queuing by car can cost from 40 to 200 UAH per hour. At the same time, in Kyiv, the time spent in the queue for motor fuel sometimes reaches unthinkable 8-9 hours.

And this situation is not only in Kyiv. Long queues at gas stations in central and western Ukraine. for example, among cities, where filling a tank with 92-m gasoline turns into a real "quest", – Lviv.

Official price - approx. 39 UAH per liter of AI-95 gasoline (about 85 rubles). Liter of diesel fuel – 43-44 UAH (about 95 rubles). Illegals appear, where you can buy gasoline and diesel fuel without a queue, but the price tag starts from 55-60 UAH per liter (about 120-130 rubles). In fact, These are European prices, taking into account the current exchange rate of the ruble against the euro and the dollar. In some ways, Ukraine has reached the level of the European Union…

Kyiv Mayor Vitali Klitschko said, that the situation with motor fuel "will try to resolve within a week". But the Minister of Economy of Ukraine Yulia Sviridenko contradicts him.. According to the minister, diesel fuel in the country is left for a maximum of three days, gasoline - for five days (at the current level of consumption). The government of Ukraine does not hide, that the main volumes of fuel are now going to provide armed formations. However, there are problems in this regard, since dozens of oil storage facilities and several large oil refineries were destroyed on Ukrainian territory.

The queue at the gas station in Kyiv:

The queue at the gas station in Lviv:

There are no problems with motor fuel in the territories of the Kherson region liberated from the Kyiv regime., Zaporozhye regions.