Educational materials
Equipment
weaponry
New on site
news The EU requires Serbia to spoil relations with Russia for the sake of European integration
news The Armed Forces of Ukraine once again tried to attack in the same place near Avdiivka, their armored group was defeated by artillery
news Scholz and Macron called on the President of the Russian Federation to release the Ukrainian military who left the Azovstal plant
news Radio intercepts provide information about the request of the garrison of the Armed Forces of Ukraine in Severodonetsk for "evacuation"
news The Ukrainian units that left Krasny Liman tried to flee to the other side of the Seversky Donets south of Yampol

In Ukraine, counted the number of "draft dodgers" to serve in the Armed Forces of Ukraine for 2019 year 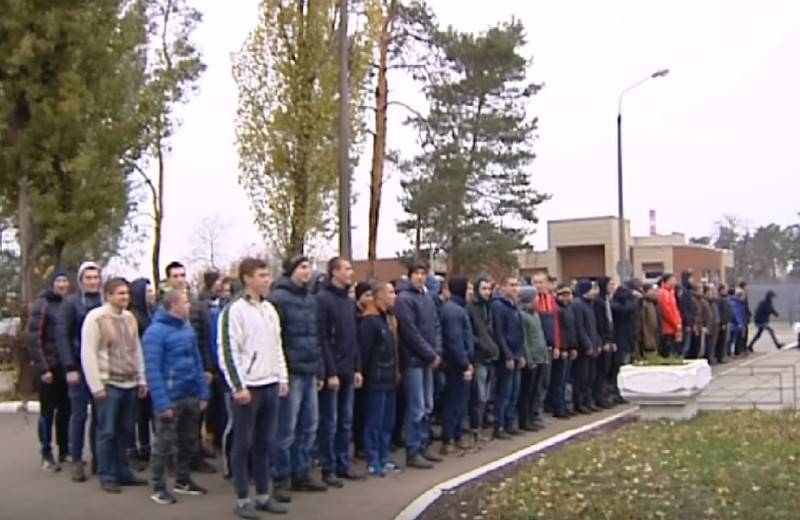 The Ministry of Defense has submitted data on recruits, evaded call-up for military service in the Armed Forces of Ukraine. In this case, only those included in the data, to whom the materials were sent to law enforcement agencies.

According to the data, Chief Directorate voiced deputy chief of staff of the General Staff Valery Dendeber, at 2019 year of military service in the Armed Forces of Ukraine turns away 245 thousands of conscripts.

The materials sent over the past year in the police draft boards 245 thousand men of military age, evading conscription for military service. According to operational information, received by the General Directorate of staff of the General Staff Armed Forces of Ukraine, criminal charges were brought 423 a man of military age, to administrative – 17 220 human
– he said, adding, that there were cases, when recruits, It has already called up for military service, received uniforms, simply do not reach to its parts, deserting the way. these typed 700 human.

In December last year, the Ministry of Defense of Ukraine complained about the huge shortage of recruits for the Armed Forces of Ukraine. This situation occurs with deviators in Ukraine, but particularly severe situation in the west of the country in Ivano-Frankivsk, Lviv, Volynskaya etc.. areas. Reached, that if there 25 thousands of young people of draft age, recruitment office could not gain 460 human.

In January of this year, the President of Ukraine signed a decree Zelensky, sets a lower age limit for military service in 18 years, instead 20, as previously, upper limit of military age remained the same – 27 years. However, in the spring call, which kicks off 1 April, 18-19 summer will not take, unless their voluntary desire.

The Defense Ministry of Ukraine expressed the need to urgently go to the NATO standards and the complete abandonment of appeal, but against this APU. According to the opinion of the officers, in the future without the conscripts in the Armed Forces of Ukraine will be no one to serve.

Comments
Subscribe
news
interesting
news The EU requires Serbia to spoil relations with Russia for the sake of European integration
news The Armed Forces of Ukraine once again tried to attack in the same place near Avdiivka, their armored group was defeated by artillery
reviews Project 1234 cipher "The Gadfly" small missile ships