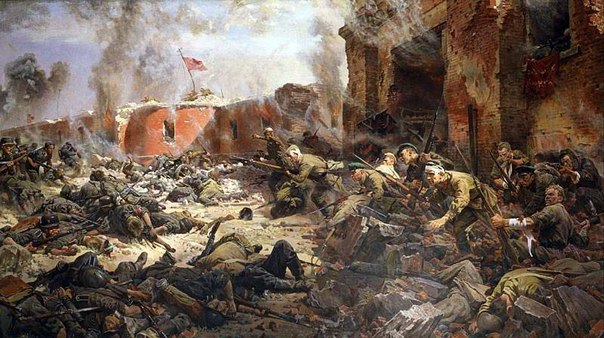 The defeat of the Third Reich during the Second World War was caused by many reasons, We want to identify the major strategic error, Germany committed during the conflict.

A major strategic mistake of the Third Reich was to overestimate their own strength. The basis for calculating the number of weapons, supplies and troops in an attack on the Soviet Union were taken by a victorious campaign in France. German military leaders were elated with this victory – French army was considered the strongest land army. By the beginning of World War II, France was the third in the number of tanks and aircraft, and the fourth power of the fleet. The total number of French troops had more than 2 million. human. But the war with the Soviet Union turned out to be total, calculated on a lightning blitzkrieg -oshibochnym. Implement it turned out to be a daunting task. When the autumn 1941 year plan “Barbarossa” failed, it meant a strategic catastrophe of the Third Reich.

15 August 1940 year was made the first German air raid on London. This day is considered the beginning of the Battle of Britain. In one day, the Luftwaffe lost more than two times as many cars, than the opponent – 75 German aircraft against 34 English. During the subsequent strikes remained negative statistics. Eventually, 17 September 1940 , Hitler ordered the transfer of the proposed transaction “Sea lion” (landing on the British Isles) indefinitely, 12 October – She moved her

the winter. spring has 1941 the year began Balkan campaign the Wehrmacht, and in the summer, Hitler attacked the USSR. spring 1942 , Hitler finally abandoned “sea ​​lion”. London he left “for later”, that based on current estimates of experts it was a big strategic mistake the Fuhrer.

Hitler wanted to fight and, himself believed, could, but the friends he gets bad, he never managed to make Germany and its allies united force. The allies of the Third Reich had in World War II goals, which were different from the Fuhrer's goals. Japan did not want to attack the Soviet Union and fought with the US. Italy has given to the Eastern Front just one division, He did not consider the Soviet Union as the main enemy of Mussolini. Was discord and among allies – Hungary and Romania have considered each other enemies. Alliance with the Third Reich was profitable Axis only until such time, until the Germans win victories. Diplomat of Hitler appeared weak.

In the Third Reich during the war always had problems with the supply. This was due to several factors. At first, German armament was very unsuited (French cannons, Czech tanks), ie require a million unique parts. Logistics of the Third Reich was weak due to staff. Working in strategic sourcing was considered conscription – Fame will not achieve. Therefore, it turned out to be second-rate and third-rate officers. Ambitious and talented officers, if you engaged in the supply of – the operational. The unresolved question of supply to the eastern front proved to be fully. only a small part of the 10th ART German tank divisions had caterpillar. The remaining cars were wheel, that it is intended for roads. In the USSR they were not. All over the country in 1941 year was less than one hundred thousand kilometers of paved roads. Car stuck in the mud and snow, technique even had to leave. braked.

German historian Bernd Wegner from the Bundeswehr University in Hamburg among the strategic factors, led to the defeat of Germany, call “The taboos associated with defeat”, which reigned on all system levels and the state as a whole, and the army in particular,. And Churchill, Stalin and the important decisions taken in council, assumed in the calculations even variants of defeat. The Third Reich in their calculations could not afford it. Any defeatism nipped in the bud. Because of this, due to a system error in the miscalculations of Germany could not build a reliable military-political concept of war. The same Wegner wrote: “It sounds unexpectedly, but most of the war, Germany was in the improvisational mode”. Even during the Berlin offensive, Hitler continued to believe, that go to Berlin Wenck Army, Busse, Army Group F. Shtainyera, which will smash the Red Army. As we know from history – not crushed.