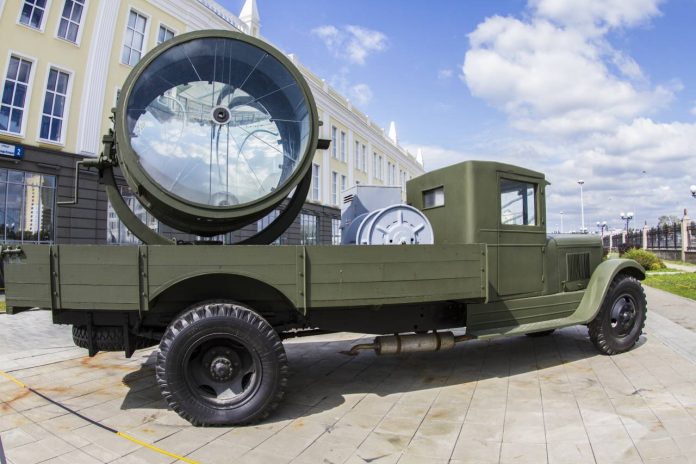 Speaking of planes, tanks and guns, We tried as much as possible to show their less fighting, but no less useful companions.

This time we will focus on technology, which could meet you in any airport of the Great Patriotic War. Of course, it was possible to do without these machines, if strongly squeeze, but with them all the same it easier.

The station is used throughout the air defense units, on the ground to illuminate his and others' aircraft search.

Automotive anti-aircraft searchlight station Z-15-4 was a spotlight with a guidance system and a control position, carried in the truck body ZIS-12. 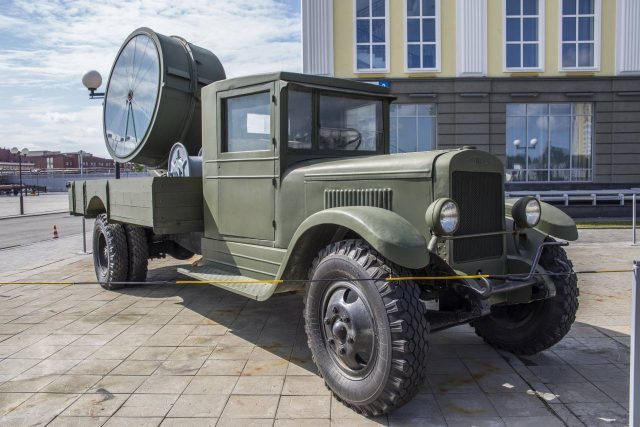 Spotlight installed the most common, gated H-15-4 (3 - AA, 15 - size of the lens 150 cm, 4 - power in kilowatts) an electric lamp with an instantaneous ignition with two carbon electrodes, paraboloid reflector and glass diameter 150 cm. 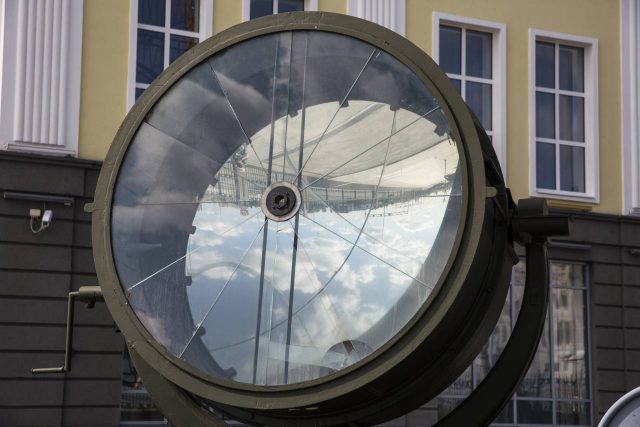 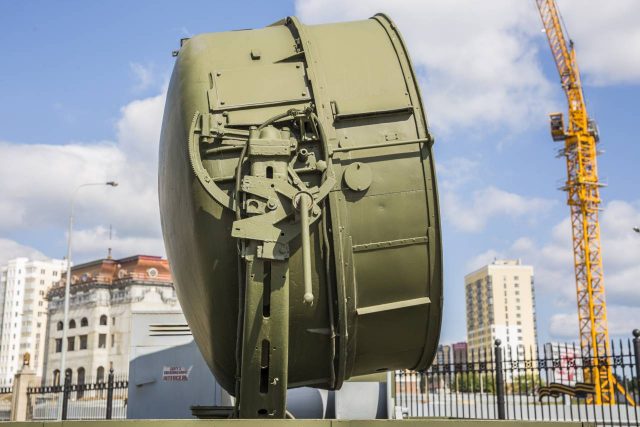 The light source was an electric arc, which provides power to the light 650 million watts at distance or height of lighting up 10 km. Aircraft could be highlighted in the sky at a height of up to 12 km.

Power carried by the searchlight power generator 20 kW, mounted on the vehicle, and from stationary sources of electricity.

Searchlight mounted on a trolley with four rubber wheels. The cart rolled into the body and so the spotlight is transported to the position. You can work directly from the car body. 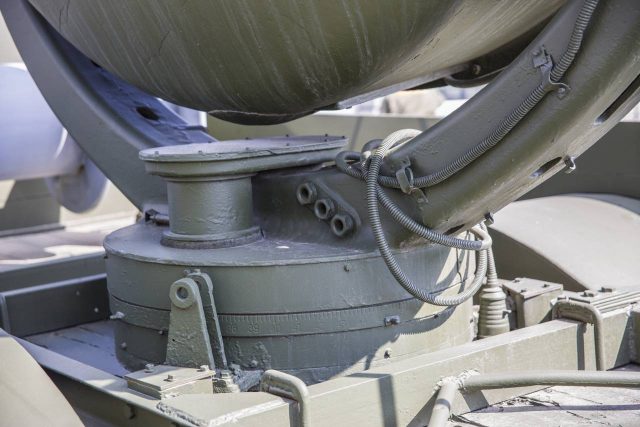 Between the trolley and the cab coil housed with the electric cable and the hand winch. Power switching shield located on the rear face of the cab. 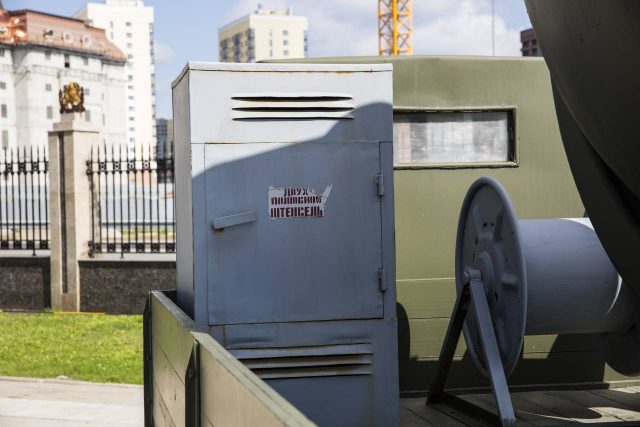 Searchlights H-15-4 were reduced in some anti-aircraft searchlight battalions, consisting of three companies (trehvzvodnogo composition). The platoon consisted of four searchlight stations. Combat use searchlight stations is to find the enemy aircraft beacon of light and accompanied by objective prior to its destruction firepower.

Benzozapravschike ... Which is easier? But to live without him in the army is very problematic. An increasing amount of equipment in the armies of both spodviglo all designers to develop these simple, but irreplaceable machinery. 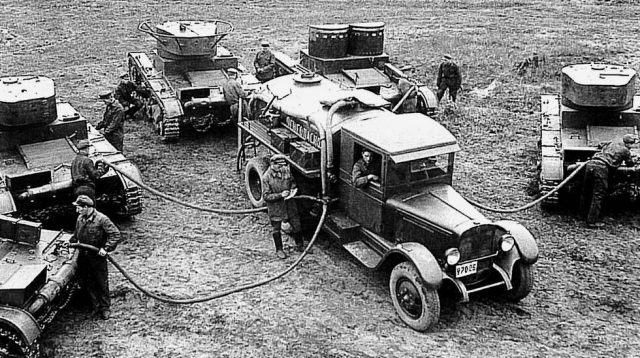 The first and most common was the Soviet benzozapravschike BZ-35, put into service in 1935 year. Vehicle ZIS-6 was equipped with an elliptic tank capacity 3200 liters, gear pump arrangement and medium compartments for sleeves. 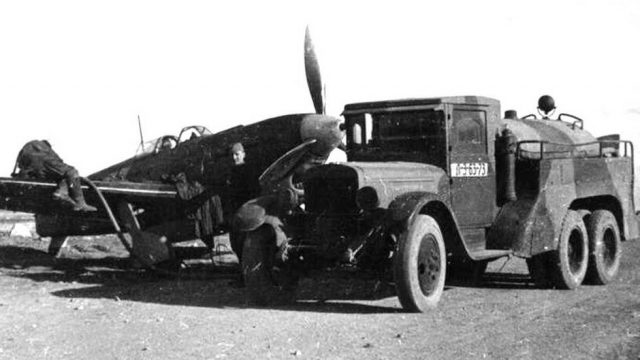 BZ-35 could simultaneously fueling the several pieces of equipment. To work with him was issued biaxial benzopritsep BP-35, capacity in 1 ton.

On the rear wall of the tank located control system, where leverage speakers housed inclusion, manometers, Counters of fuel and the fuel gauge in the tank.

BZ-35 was equipped with a set of hoses (receiver, dispensing and pumping), to transport special box that was made.

The car is very well proven in service and has been recognized as very useful. But in large-scale production has not gone. BZ-35 were on the farm only large airfields Red Army Air Force. Pre-war edition of BZ-35 is not exceeded 100 machines.

The outbreak of war car charging rate, tanks and aircraft has become a very serious factor. I had to quickly get out, and so there was a small, but rather an operational benzozapravschike BR-41.

For him, used a lighter chassis truck ZIS-5. 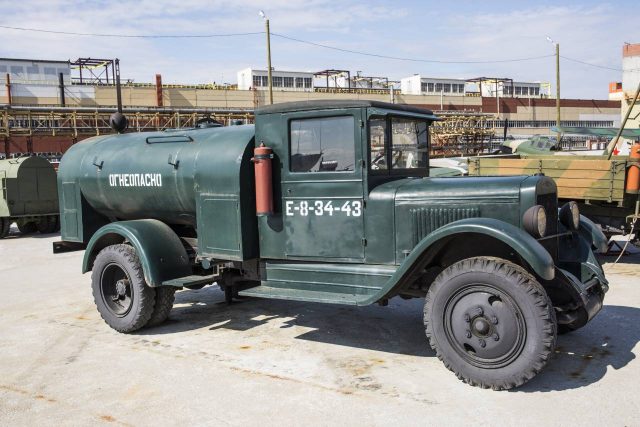 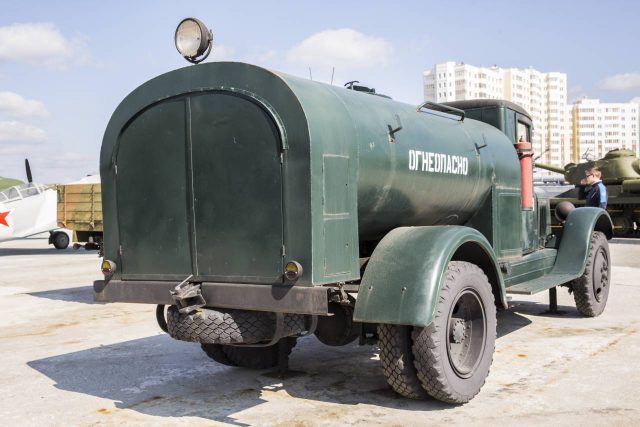 Naturally, when we began to receive powerful and traversed by trucks from the United States, namely "Studebaker» US.6.3, to the idea of ​​refill benzozapravschike rows returned.

Yes, ZIS-5, it was difficult to keep up with the advancing armored units, let us say, in the spring or autumn slush. Or wade through the mud to dry airfield "jump" in aviation.

"Studebekker", which the, as we have had the honor to tell, showed, he copes with our dirt. And there was a BZ-35S. "C" - is, understandably, "Studebekker". 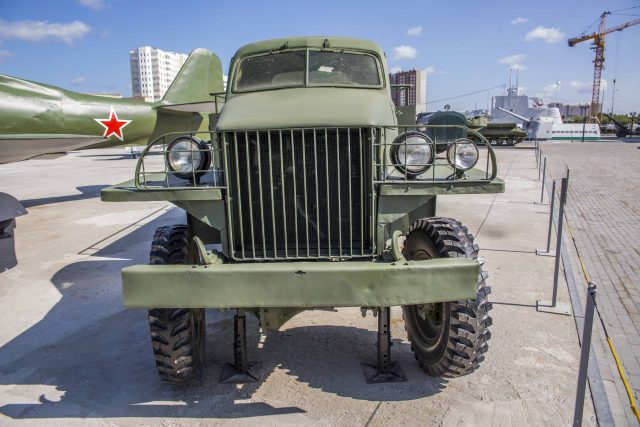 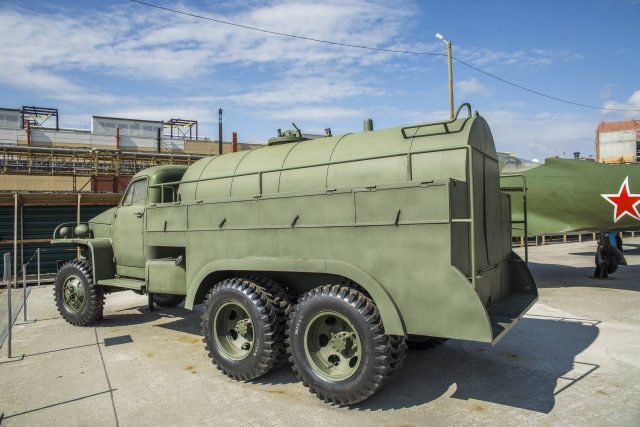 The car was produced from 1932 g. and intended for engine start helical planes. 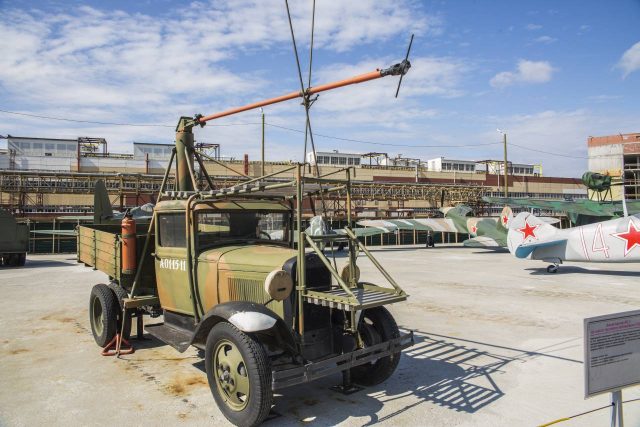 Starting was carried out by capturing a propeller aircraft and aircraft engine cranking the crankshaft through a tubular structure with two drive shafts. 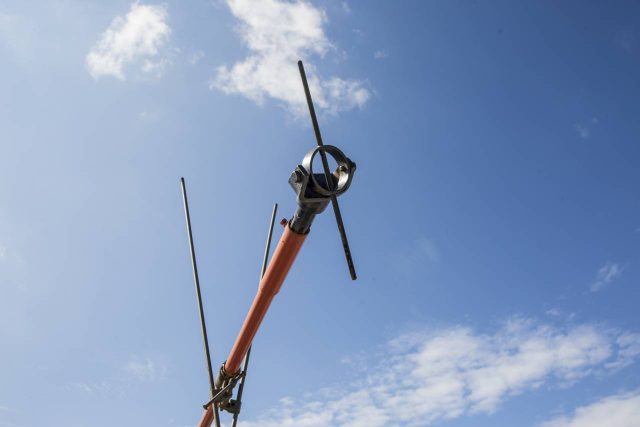 End of this device here (it was called «trunk») Matched with the hub of the propeller aircraft. 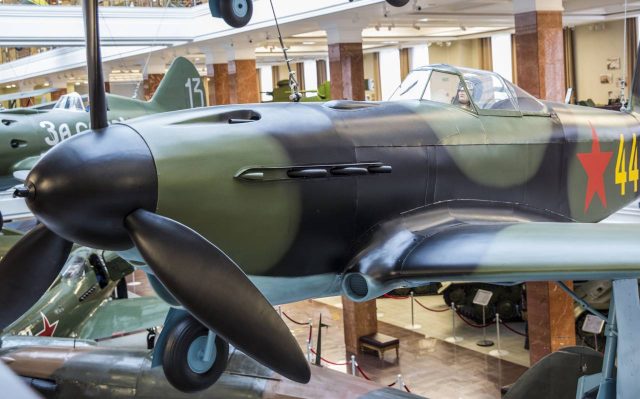 There are clearly visible slots just for trunk.

Behind the cabin is mounted vertically to the cabinet braces and shaft, Gets the rotation of the transfer of the car box.

This PTO system allows the plant to almost all models of aircraft engines. The starter gave 1100-1300 rpm. The height of the trunk horizontally equal 2,9 m. 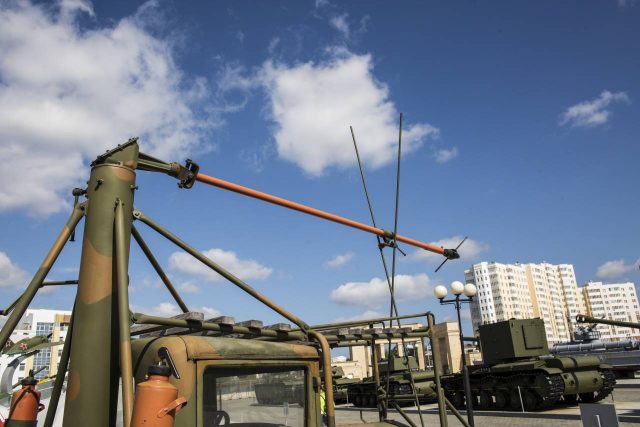 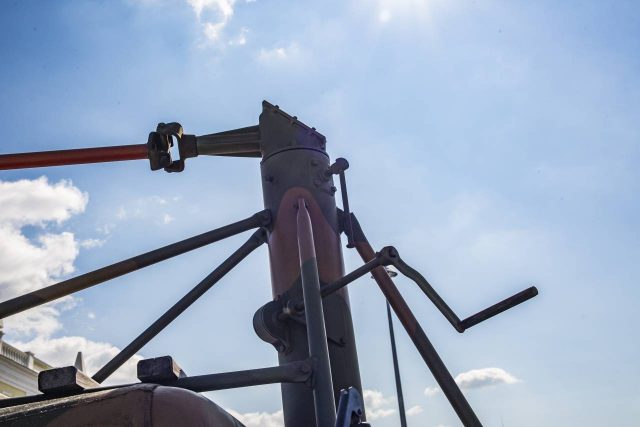 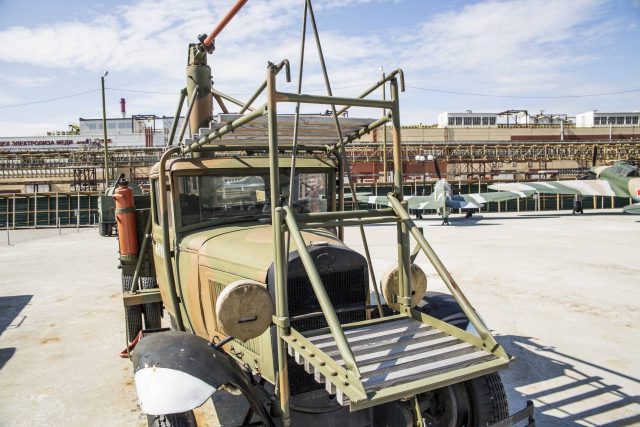 Base is still the same, "lorry" GAZ-AA with an engine capacity 40 HP.

The most common machine breakdown was repair shops PM-3 (leafjet type A), received during the war designation PARM. 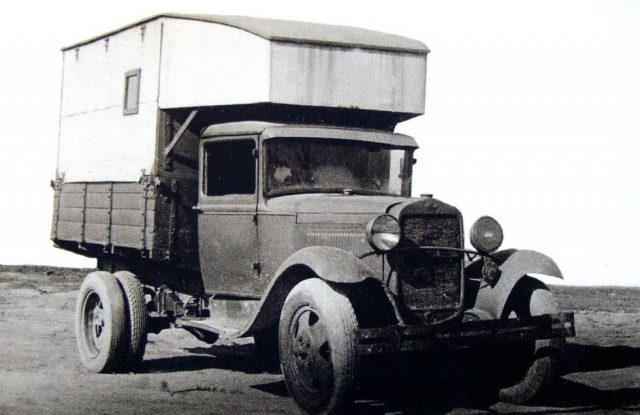 It was simple and unpretentious, but it was the arrival of this machine is expected to shrink by and forced pilots, and broken tankers, and even the railroad. 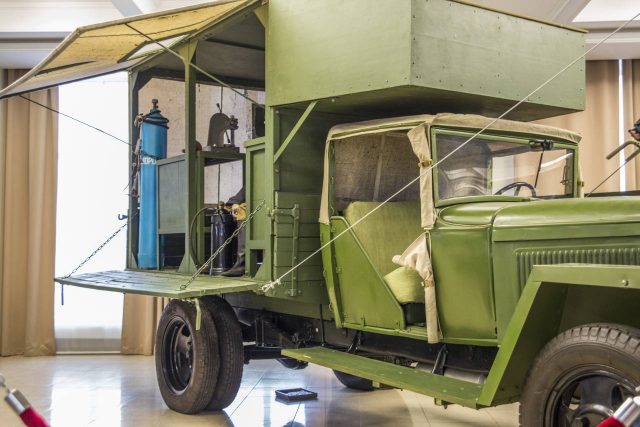 The equipment was located in the back of the van,. Complete Parma vhodilo: 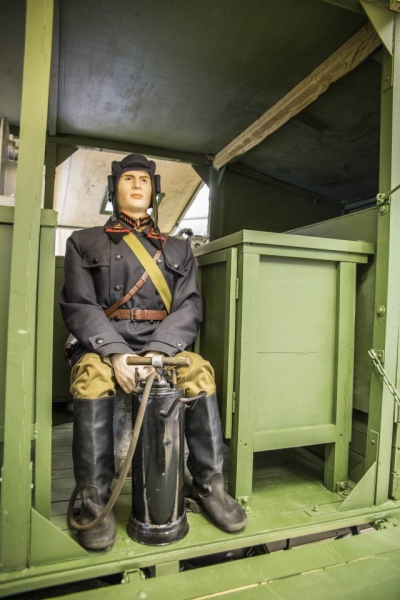 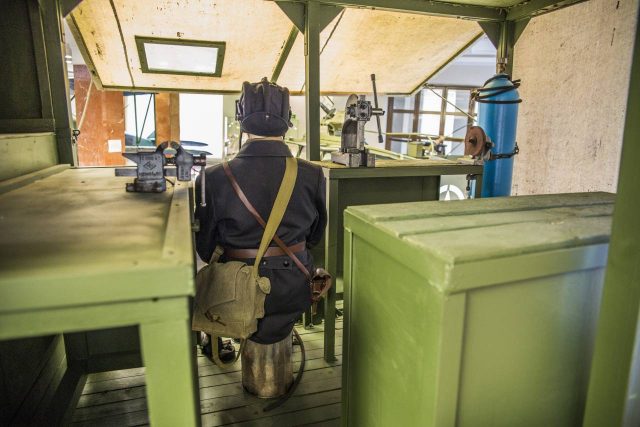 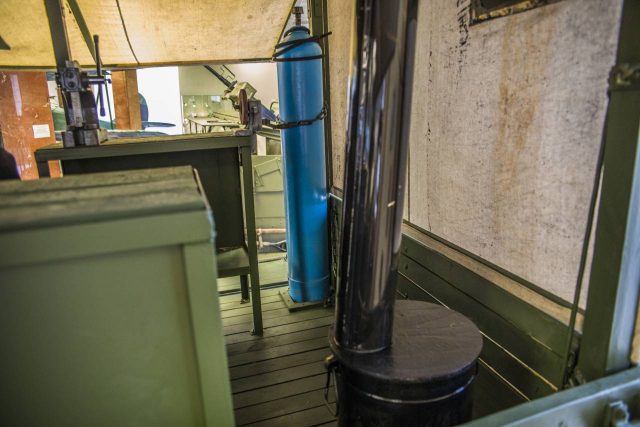 6. Wardrobe with cutting-refueling inventory.
7. The staircase in the rear.
8. Folding crane with manual hoist lifting capacity 500 kg, which was attached to the front bumper. 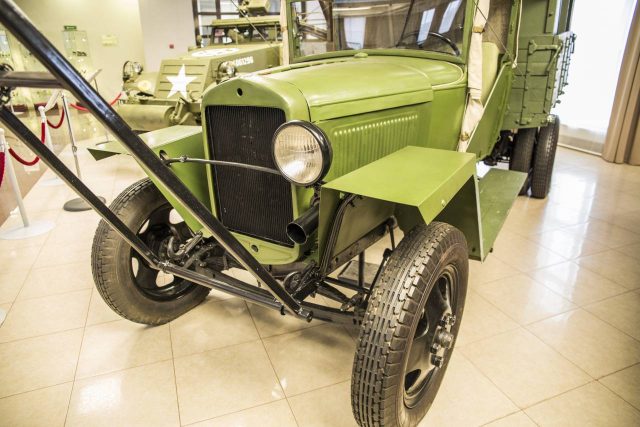 Basically, using such a kit can be carried out many work directly on the site of the accident.

Many will not tell, all, basically, clear and understandable. Simple and unpretentious machines, such humble toilers War. But sometimes simply irreplaceable.

All of the machines in the photo you can see (and not only see, but also touch) at the Museum of UMMC in Upper Pyshma military equipment.

Luxury collection, I hope, that over time will find maslogreyku, and a mobile station battery power. It would be interesting, is not it?