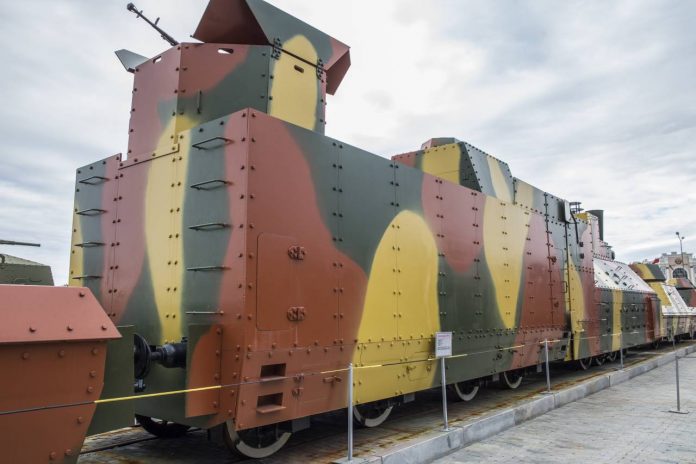 Continuing the series of articles on Soviet armored trains, we confess two things.

At first, We fell in love with the railway systems. Probably, this is due to the initial lack of knowledge of the matter.

At least, these are the conclusions come to mind at the close acquaintance with the history of armored trains. In general - how to build, and fought. of people.

Today we will focus on the specific, Known to many armored trains. Considering, readers "technically prepared", today more about the exploits, of daily work, about people… 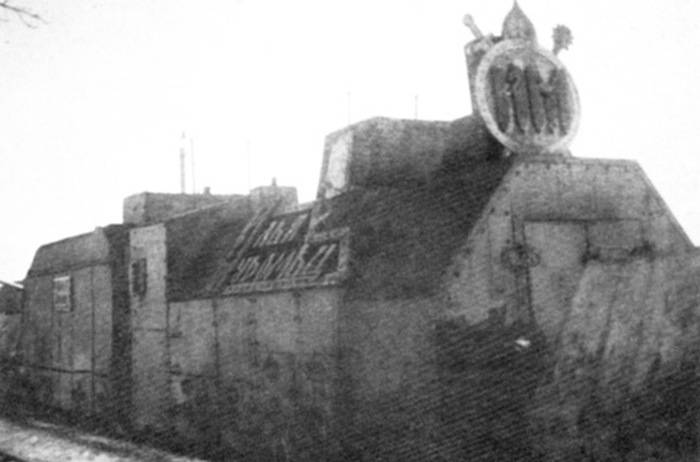 Let's start with the promise of the mass of the armored train of the Red Army, developed in the 1942 year - PD-43.

Bronepoezd BP-43 It consisted of broneparovoza PR-43, located in the middle of the composition, 4 artillery broneploschadok PL-43 (by 2 broneploschadki on both sides broneparovoza), 2 anti-aircraft weapons with broneploschadok VOP-4 (at both ends of the armored train) and 2-4 control platforms, which transported needed to repair the railway track materials or landing. 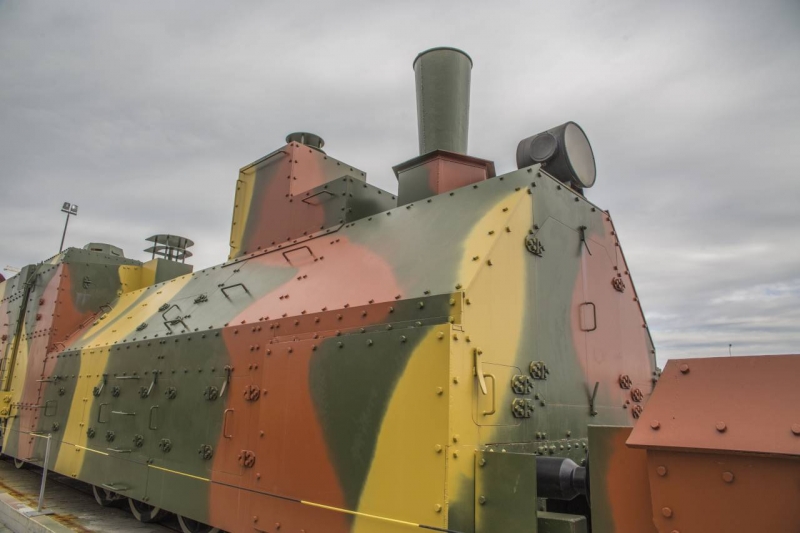 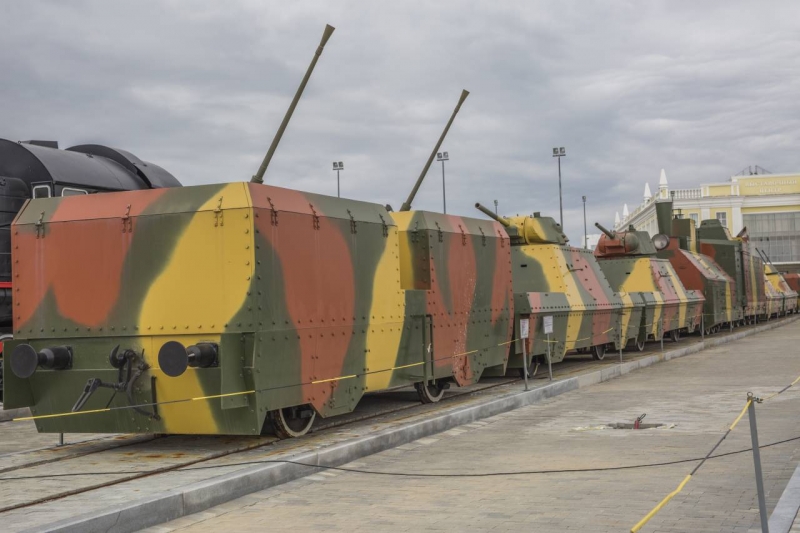 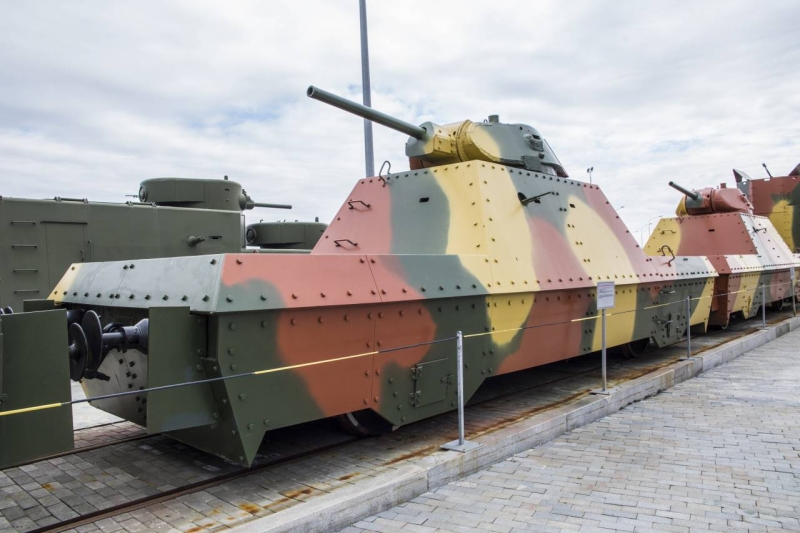 Usually belonged to the armored train 1-2 ʙroneavtomoʙilja TO-20 or TO-64, adapted for movement by rail. 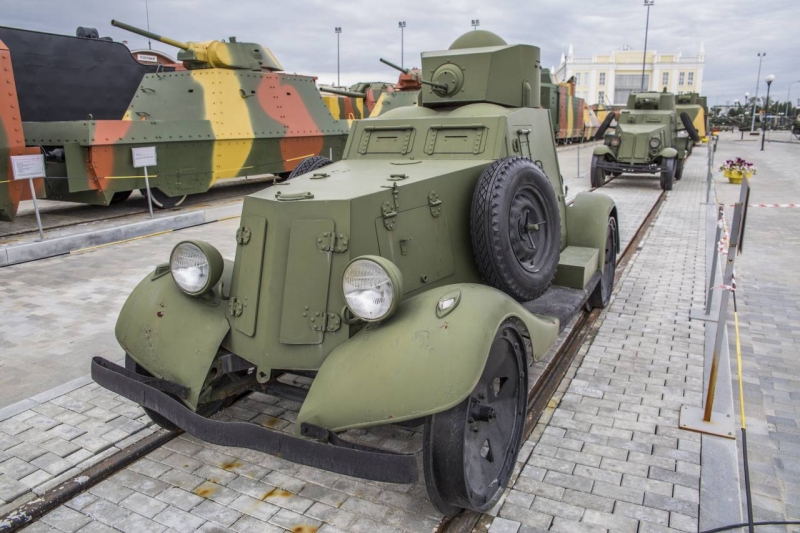 For the Red Army during the war, it was made 21 bronepoezd BP-43. The same number of armored trains of this type have received and NKVD troops.

"Heavy" armored train armed with 107-mm guns with a range of 15 km. booking (to 100 mm) It ensured the protection of vital units against armor piercing projectiles caliber 75 mm.

On one refueling and water train was able to overcome 120 km at a maximum speed 45 kmh. The fuel used in coal (10 t) heating oil (6 t). Warhead weight does not exceed armored 400 t.

The crew consisted of a combat unit commanders, control platoon, bronevagonov platoons with tower calculations and offices onboard machine guns, air defense platoon, platoon traction and movement and a platoon of armored train, in which there 2 light armored car BA-20zhd and 3 medium armored car BA-10zhd, adapted for movement along the track. 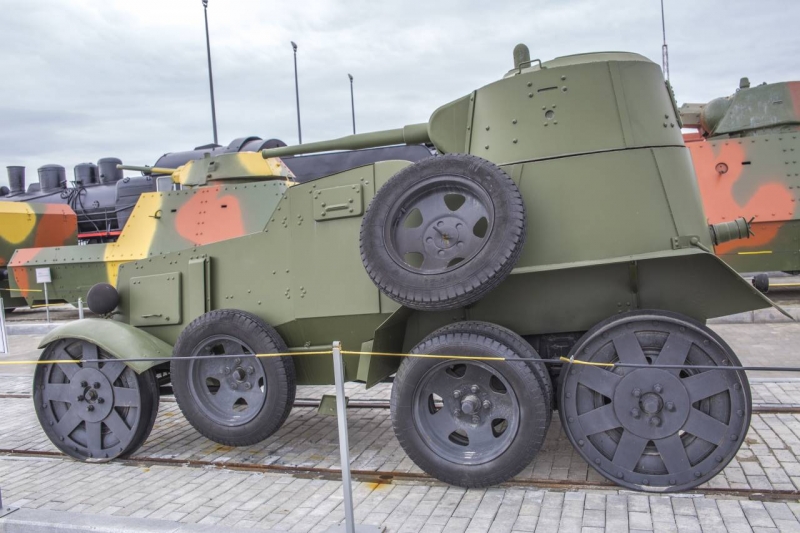 Armored cars were used for reconnaissance at a distance 10-15 km as part of escort (watch) on the march. Besides, to cover the platforms could accommodate the landing of up to three infantry platoons.

Most of the best-known BP were just BP-43. The most successful design has armored train "Kozma Minin", Built in February 1942 at depot Gorky Moscow under the leadership of engineer Leonid Dmitrievich Rybenkova. 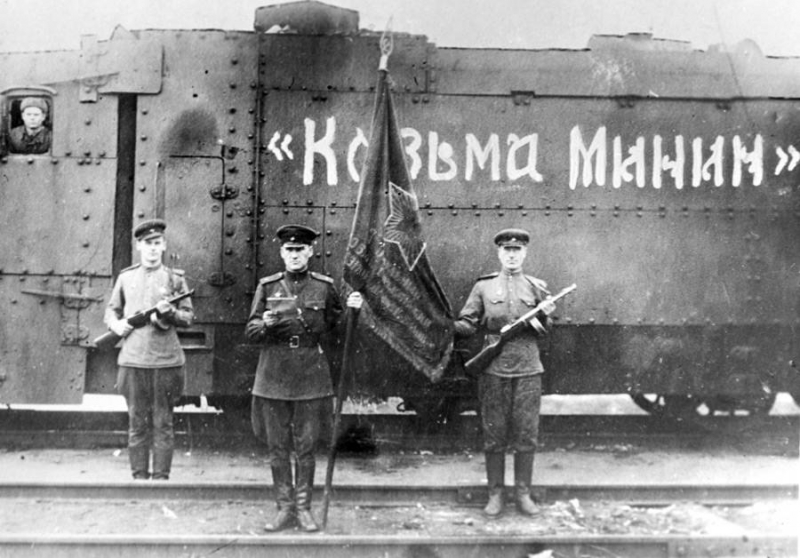 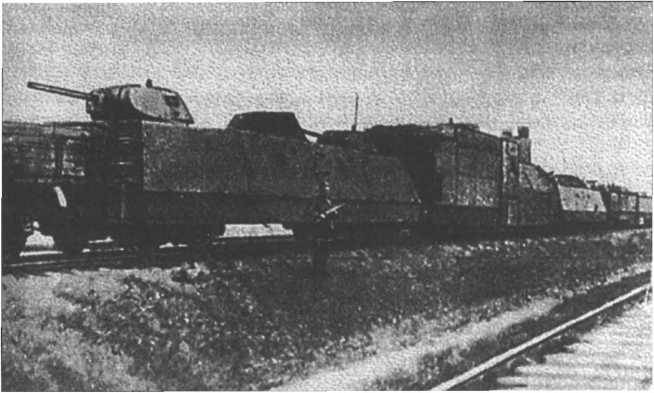 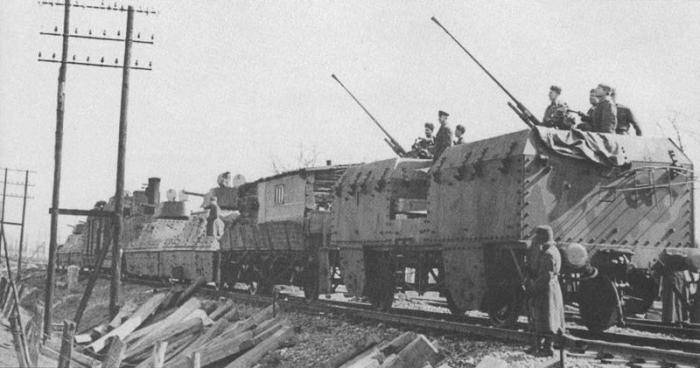 Open artillery platforms were divided lengthwise into three compartments. The front and rear compartments of 37-mm anti-aircraft guns were installed, and in the central compartment was launcher rockets M-8. 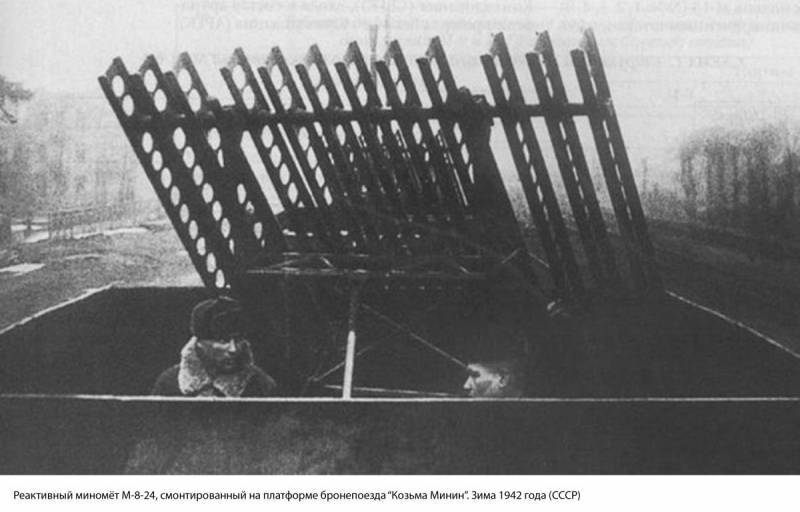 The thickness of the side armor was broneploschadok 45 mm, broneploschadki had covered the upper thick armor 20 mm.

Protected thick armor 30-45 broneparovoz mm was used as a thrust only in combat conditions. Hiking and maneuvers used by conventional locomotive. At the tender broneparovoza commander's cabin was equipped, connected to the booth operator armored door.

From this cabin armored commander broneploschadok control actions via telephone. For external communication at his disposal had a long-range radio PCM.

Due to the presence of four long-barreled 76.2 mm cannon F-32 armored train could provide a high concentration of artillery fire and conduct aimed fire at a range of 12 km, launchers and M-8 allows it to hit the manpower and equipment of the enemy, working on the areas.

During the war train was knocked 14 (by memories of Alexei Commissioner Potekhina) or 15 (official data) aircraft. He participated in the defense of Tula, the liberation of Orel, Bryansk, Gomel.

Next - the way to Europe. Exemption Wolomin, Prague Warsaw, Warsaw. by the way, Wolomin residents 23 February was awarded to the crew of an armored train bronze lion in gratitude for saving and heroism.

Once militia, collected Kozma Minin freed from the Poles to Moscow. And the three hundred thirty-three years, "Kozma Minin" already liberated Poles by the Nazis. Here is a historical conflict ...

War "Kozma Minin" graduated, as befits a hero, in logs enemy. True to Berlin, he was not able to enter. The Germans blew up the bridge over the Oder. So that, train was stopped in 50 km from Berlin.

But, after the surrender of the Nazis as part of the division ensured the safe passage of the government train with the delegation of the Soviet Union at the Potsdam Conference of Heads of Government. 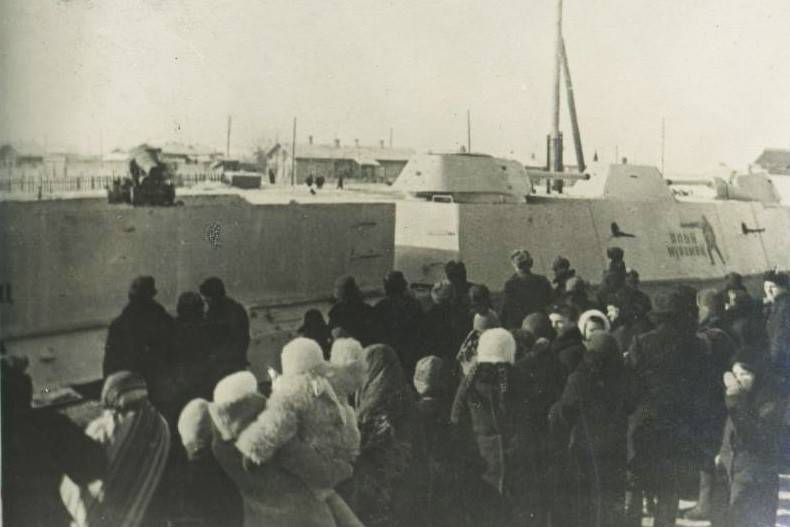 Armored Train "Ilya Muromets" It was built in 1942 year in Murom. He was protected by thick armor 45 mm and the whole war not yet received any holes. Armored train has gone from Murom to Frankfurt an der Oder. 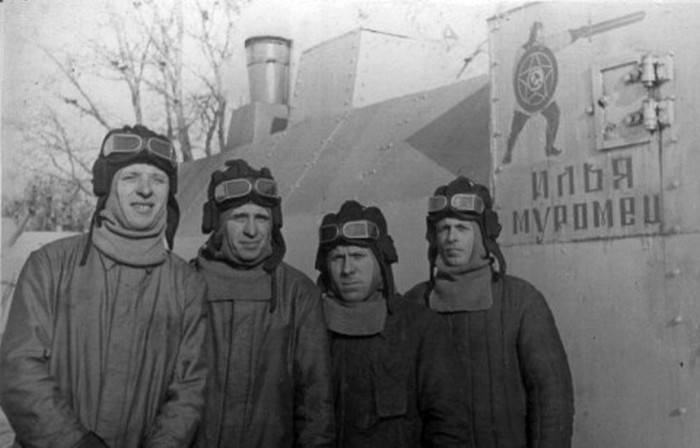 During the war, he destroyed 7 aircraft, 14 guns and mortar batteries, 36 enemy firing points, 875 officers and soldiers. Besides, hero "Muromets" destroyed the armored train of the Wehrmacht.

There is a small problem. Alas, but armored "Adolf Hitler" did not exist, like there was not a single combat unit, except Division «Leibstandarte SS« Adolf Hitler », named after the German Fuhrer's.

About Leibstandarte also not so simple, division name can be translated as "Adolf Hitler Bodyguard". properly, Division was formed on the basis of the personal protection of the Fuhrer. Most of Hitler's name was not wearing one: our parts, no ships, or channels, no city or town. We did not find mention of an armored train.

But is not the point, if anything, is not it? The bottom line is, that the crew Soviet armored train "Ilya Muromets" destroyed a German armored train. And it's a fact, which did not become less important, on, that the destruction of the armored train was not wearing a name of the Führer.

Well, a beautiful myth, which was invented ... And okay! War - it is always the information war. And most importantly? Correctly, victory. real, not invented. After all, the reality is always brighter and more interesting myth.

And in our reality the 31-th separate special battalion of armored Gorky, which included an armored train "Ilya Muromets" and "Kozma Minin", He was awarded the Order of Alexander Nevsky. For outstanding military merit.

About the fight, "Ilya Muromets" German armored train all nasochinyali with three boxes, to be honest. A lot of time was spent, to find out in detail in the, what happened there.

Until today has reached and now rewritten the story of, that "Ilya Muromets" and German BP almost head-on clash between. In fact, the whole story with one gulp, the enemy will collapse in the PSU chips quite fantastic.

And now we want to present to the court his version of. Different from the generally accepted in the Network.

so, German armored train (not "Adolf Hitler", It turned out, and number 11 or №76, we have not yet specified) in June 1944 , I began to systematically and regularly bombard the objects of our troops in the vicinity of the station Kovel Volyn Oblast Ukraine.

Some sources give a picture:

"Taking advantage of the German pedantry and terrain features, Armored Division headquarters has developed a plan of operation. Gunners at the same time had to bring down the railroad tracks, to cut off the enemy armored escape route, and "Ilya Muromets" should be parked close to the battery of invisibility. In order not to frighten off the enemy, We decided to initiate action without zeroing ".

We leave to the conscience of all who wrote it, since this literary work does not correspond to reality. Hereinafter referred to as were the data on the consumption of shells (10 an instrument). What makes the picture all fantastic.

Recall, from "Elijah" was 4 gun F-34 caliber 76mm. Total - 40 shells on the destruction of roads and armored enemy. Without prystrelky. 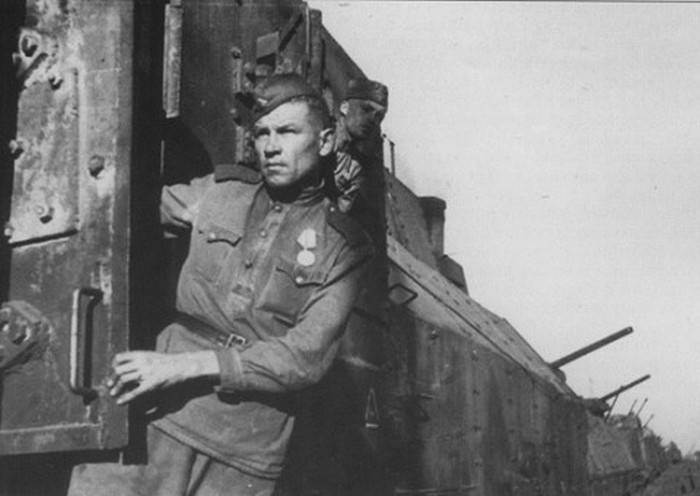 Of course, zeroing was. And there was a splendid work of our artillery reconnaissance armored. While the Germans were entertained, their displacement map and calculated point was compiled, which opened fire. And of course, zeroing was conducted. With it positions, which was supposed to open fire, "Ilya". This was the essence of his own.

During research on the subject met the captain memories (while) Alexander Vasilchenko, howitzer artillery reconnaissance regiment. Vasil spoke about, that in the case, when it was desirable to draw attention to the fact of zeroing, zeroing produced training projectiles. I.e, perfect blanks, which did not explode.

maybe, very possible, that the ways of the approach of the German armored targeting exactly. As an option - piercing shells.

Rocket launchers, targeting should not have, as it is still the weapon of work on the areas.

But nonetheless, task of hell for scouts and spotters. But we coped well on the basis of.

Further. Really, German punctuality - this thing, which allows to use it for their own purposes. For sure it was known exit, the German armored train on the point of opening fire and pretty, this point has been calculated accurately.

We also offer a timekeeping:

1. "Ilya Muromets" advance, in the dark, neatly, not unmasking himself, It comes to a predetermined position. With the first rays of the sun is pre aiming at the spot, which is due out German. Then all the wiring bundles of nerves, and exploration and spotters also eye.

3. Sipping coffee and breakfast, Germans begin the nomination. The crew of "Ilya Muromets" is waiting for completion of the process. Once intelligence gives the go-ahead, that the German position on the, It is the first salvo.

"Elijah" guns give first, included adjustment volley. Adjustment and further really quick fire, all there is, on the web, or by locomotive, but it is more difficult.

from, that the German BP remained in place, should be the, that in a way likely to, vlepyly. And it was the PC, because the 76-mm shell - it is not enough. But the 82-mm rocket - and that's how we, so well.

4. Germans, naturally, once in a binder, immediately begin to deploy its tower in the direction of "Elijah". But, unlike our soldiers, they need time to turn, aiming, adjustment. Time, which they do not have.

Hence the fight the distance was less than 5 km. Not in focus, but…

5. The Germans give the first salvo included adjustment. Since the beginning of the battle took maximum 5-6 minutes. Shells mildly, not lie next to our armored train. There is a lack of coordinates, vanity, caused by an unexpected battle, and so on.

Well, the Germans did not like fuss, what to do.

But our might, able, practiced. We do not know, how long it took the men "Ilya Muromets", to recharge the installation of MS. but we think, which is less than the standard 10 minutes.

6. The second salvo "Ilya Muromets". In terms of, rockets. Guns were not breaking off to pick German. The sight is no longer in the rails, and himself an armored train.

properly, all. hit. the fight is over.

It was noted in the report, that "the enemy's armored train enveloped in clouds of white smoke or steam". obviously, that hit the pot.

A month later, in July 1944 of the year, Kovel was released. And it was discovered by Soviet fighters broken-down armored train German. The best proof of the success of the crew of "Ilya Muromets". 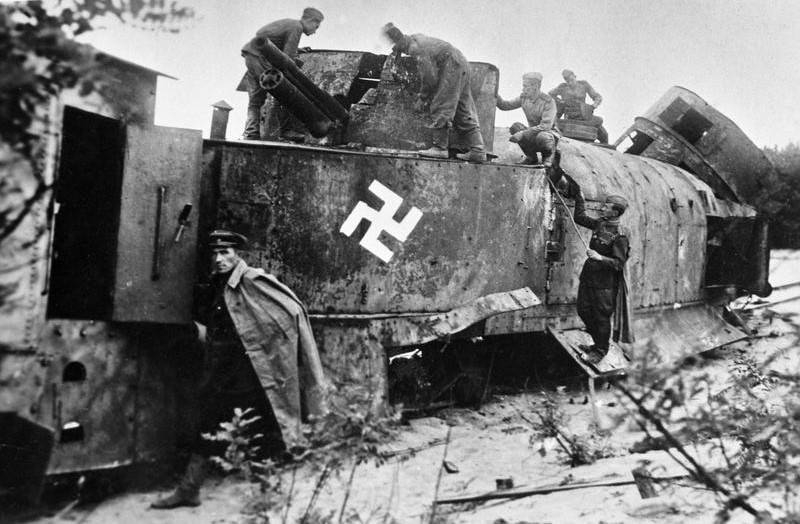 That's the story. clear, that "head-on" armored train did not converge, otherwise it would not have had to wait, to take a picture of the broken enemy armored train. But - and so just fine.

Only one in the entire Second World War battle of two armored trains ended with the victory of our "clear advantage".

In the next article we will talk about the armored train, from which all began our familiarity with trains. This is an armored train number 13 "Tula worker" and his two original story. In detail, and with the creators videorasskazami his second incarnation.