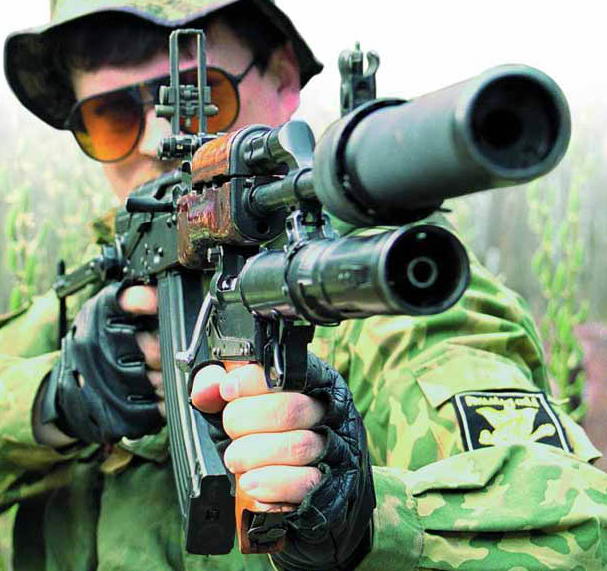 To ensure noiseless and flameless throwing grenades “product” used special cartridges expelling “mouthpiece” cutoff propellant gases within the sleeve (similar 7.62mm cartridges by Device PP “Snake”,but of greater caliber and size), a start pulse is transmitted by means of garnet rod, attached to the back of her body. This design was very complicated, primarily due to the high complexity and high cost of special ammunition, and because the complex BS-1 WGA-86 "Silence" was dropped from the gas cutoff within each sleeve, and instead to lock the powder gases in the weapon barrel, that would be used for throwing grenades much more simple and cheap blank cartridges of conventional design.

Need to say, that the principle of eliminating sound and flash shot by locking powder gases in a closed old obemedostatochno – The first patent for a similar system date back nachalom20 century. It should also be noted, which is about the same period, (1960-70-years) in the West for arming its special forces was developed by a number of small-caliber (50-60mm) mortars, Use the same principle of muffling sound of a shot. Howbeit, BS-1 complex WGA-86 "Silence" entered service army special sun USSR. Its purpose was to defeat the purposes of the type of fuel tanks, aircraft parked, booths with electronic equipment, launchers, tactical missiles, etc.. obviously, that noiseless and flameless firing significantly reduces the chances of a rapid detection shooting, and therefore increases the chances of successful execution of combat missions and even special forces, perhaps, a successful retreat after the task.

In connection with adopting and massive arrival of Soviet troops in the new complex firearms chambered for 5.45mm caliber has become necessary to adapt silent grenade launcher under the new weapon. Since pleasing results when shooting bullets 5.45 CSS with a silencer has been achieved only shortened AKS-74U(UB), a new version of the complex, were designated BS-1M 6S1 "Canary", It was developed precisely for this machine. While maintaining the overall design of the grenade launcher and grenades, and their general form designers CRI TOCHMASH managed to increase the efficiency of the warhead grenades, and the range of fire from a grenade launcher, in this case instead of a special blank cartridges caliber 5.45h39 idle 7.62h39mm caliber cartridges have been used. Around since the early eighties silent 30mm grenade launcher 6S1 “Canary” of: Grenade BS-1M, AKS-74UB and muffler PBS-4 began to arrive in the Soviet army special forces. 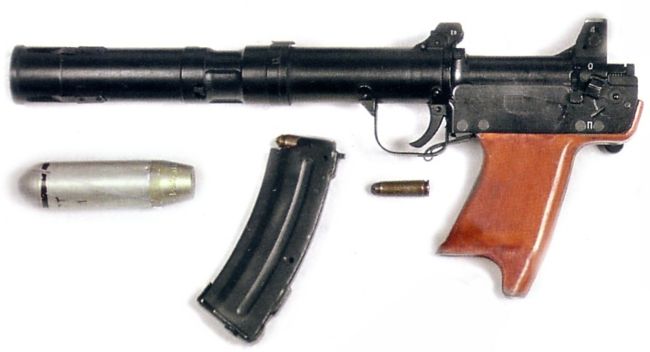 Quite attached grenade launcher BS-1(Ssubsistence-86) It is a separate loading arms, which fires a grenade charge in the barrel with muzzle, and expelling(metatelʹnye) charges are applied to the breech. At the moment of firing the powder gases from the blank cartridge is pushed forward piston, located at the rear of the barrel, accelerating the piston and the grenade over doskorosti 100 m / s (to 175 m / s for the BS-1M). After the departure of grenades izstvola piston stops in the barrel, locking under high pressure propellant gases in a confined space. After their ostyvaniyai pressure drops to a safe recharging is possible grenade,ie. loading in the trunk of the new grenades (the piston osazhivaetsyanazad), ejected cartridge cases and chambering a new vyshibnogopatrona. Reloading weapons ammunition made from detachable box magazine (capacity 8 cartridges for BS-1 or 10 for BS-1M), located in the handle of a grenade launcher, using rotating bolt rifle type. For firing a grenade at are the trigger and manual safety. They used two types of grenades – combat armor-piercing incendiary (designation FOG-T) and training with an inert warhead. WOBO cases stabilization of grenades in flight carried out its rotation,for which the housing grenades made ready to follow projections on the rifling in the barrel grenade. To aim when firing from a grenade launcher in the rear sight block machine sets up a special folding sight is used together with the standard front sight machine. To install a grenade launcher on the machine used a special attachment,with the earlier version (for AKMS) and late (for AKS-74UB) imeyutraznye bracket system and incompatible for seats.