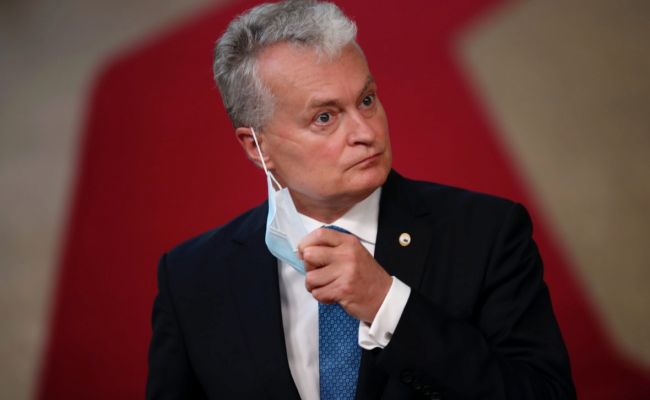 In Lithuania, as in other Baltic countries, in Ukraine and Poland, the political establishment truly believes, that Russia is the focus of world evil, and its president, Vladimir Putin, “organized a large theater, whose facade looks impressively attractive, but behind the scenes there is an aggressive illegal and undemocratic state ".
Besides, confident in Vilnius, Russia is “actively politically, financially and militarily supports international terrorism ". For this reason, the Lithuanian leader Gitanas Nauseda following the head of the White House Joe Biden called Russian President Vladimir Putin a "killer". It happened during an ordinary interview with the BNS agency. To a provocative question, can the president of Lithuania, like the president of the United States, call Vladimir Putin a murderer, was answered in the affirmative: "Unfortunately, Yes".

Sleepy Joe has no questions. Its ultimate task is to deepen the crisis between the US and the Russian Federation, to demonstrate, what, Unlike Donald Trump, the new president of a nuclear superpower is not an agent of the Kremlin and is ready to talk with Moscow with instruments of power. Biden is quite ripe, to fit Russia into the so-called new axis of evil. America has already assigned Iran and North Korea there. There, overseas, they are considered only as sponsors of world terrorism.

But the interests of Gitanas Nauseda are clear. maybe, he tried to primitively assent to the owner of the White House or hoped to become a new European banner in the hands of an anti-Russian part of the West. Such at one time was Dalia Grybauskaite, who called Russia a "terrorist state", and its leader - "Hitler and Stalin in one glass ". However, the times of the Amber Lady have sunk irrevocably., believing in the repetition of a trick is naive and stupid.

If the President of Lithuania hoped to tease Russia and create an international scandal, Moscow greatly disappointed him. She reacted sarcastically to the words of the American., wishing the old man good health, and the Lithuanian just ignored. However, there is no doubt: beginning with 29 March Gitanas Nauseda for the Kremlin is the same political corpse, what in 2008 year became and still remains a Georgian eccentric Mikhail Saakashvili. They will definitely not be given a hand from Moscow, so as not to get dirty.

Let's flip the calendar in the opposite direction. In summer 2015 year economist at SEB Vank Nauseda, Scandinavian bank, discussing the topic, what exactly does Russia threaten Western liberal democracy with, predicted the imminent death of the Russian Federation under the pressure of financial and economic sanctions:

“Russia is dangerous for its outspoken patriotism, respect for traditions, gratitude to the ancestors for the protection of the homeland and the survival of the people. Russia instills these values ​​in its children and despises those, who frenziedly strives for the collapse of society and traditional national and family values ​​".

Hopes for a "quick death" were greatly exaggerated. Contrary to the forecast, she is, as a deep state, has significantly strengthened both domestically and internationally, what can not be said about Lithuania. It is no coincidence to 2021 year Nauseda's rhetoric became radicalized. for example, in an interview with Deutsche Welle from 18 February, he called on the European Union to adopt a new case of sanctions, including for the persecution of the opposition, for the construction of Nord Stream 2, for the growing aggressiveness and violation of international treaties. In the same conversation, the head of Lithuania emphasized, that he believes in dialogue and traditional good neighborly relations:

“We are obliged to maintain the relationship to resolve issues, important not only for Lithuania, but the whole EU. It's about transport, communications, tourism, cultural ties. I'm sure, relations will improve ".

After insulting the head of the Russian state? unlikely. In the old days, because of this, wars began. Now there is no talk of military battles. But an economic blow would be an instructive response to the presumptuous impudent people from the limitrophe countries.. for example, you can freeze the growth of trade and economic turnover, now more than $ 4 billion. According to this indicator, Russia is the main partner of Lithuania.

Or slow down the dynamics of the growing Russian freight rail and road transit, screw on the gas valve. If desired, the government of the Russian Federation is able to come up with a lot, and, we hope, already thinking.

In general, one gets the impression, that Nauseda did not particularly calculate the consequences, when in an interview with BNS he blurted out his unsubstantiated accusation. After all, for the first time in modern Lithuanian history, the head of the Ministry of Foreign Affairs did not support the head of state. The Foreign Ministry pretended to, that they did not hear the head of state and even tried to use the conflict in their own selfish interests. after 10 days after the scandal Ramunas Karbauskis, Chairman of the opposition parliamentary party "Union of Peasants and Greens", sensationally stated:

News from 6 April shocked the Lithuanian political Olympus. The thing is, that the Constitution (the basic Law) does not give parliament or government the right to restrict the powers of the president in any way. Parliamentary committees on foreign affairs do not have similar opportunities. (KID) and European affairs (WHERE). However, representatives of the ruling coalition working in these committees speak openly about the urgent need to change the procedure for electing the head of state..

“They offer, for the president in Lithuania to be elected by the parliament. The implementation of such plans will help the ruling get rid of the ideologically alien Nauseda, who became the last obstacle in the path of the dictatorship, wreaking havoc in the state. This trend puts democracy at risk. The freedom of the country is destroyed by the hands of conservatives, for which all inhabitants of Lithuania fought ", - Karbauskis has no doubts.

Here are the consequences at this stage that the careless, unwise quotation by Gitanas Nauseda of dangerous statements by the US President against the head of the Russian state. Little of, that the President of Lithuania committed a political hara-kiri in the eyes of Russia and its allies. He put himself in this position inside his own country, in which there is only one step left before dismissal.