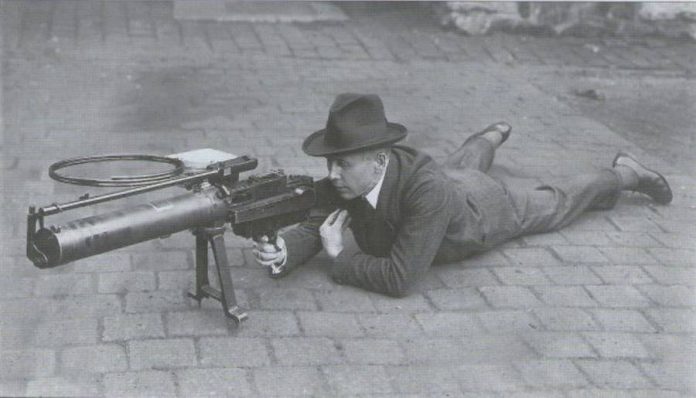 Approaching the anniversary of an outstanding designer, citizen and patriot of the Fatherland - Mikhail Kalashnikov. It happened, that during the development of the production of his machine on the Izhevsk Motor, and then on the "Izhmash" in Izhevsk were German technical experts on small arms and motorcycle production.

obviously, what all the hype is coming from pathological haters of Russia and clearly schizoid personality, addicted to the idea his own greatness on the media space. In this Schmeisser attributed to such a fantastic contribution to the development of small arms, which even he, not devoid of ambition, I did not know.

In order to understand the true merits of the Schmeisser in the development of small arms, and to evaluate its design level, It is necessary to understand in several areas, so, Before looking at the published patents and Hans Hugo Schmeisser, to be learned following consideration, without which any assessment of the gloomy Teutonic genius will make no sense.

«If a person's ear came the bear, that he should not talk about the innovative ideas of Alfred Schnittke in his first symphony.»

Weapons - this is not just a set of tactical and technical characteristics, name of the designer and the year of adopting. For this evaluation requires knowledge in ballistics, based on technology and production engineering, special sections of mechanical engineering (principles of automation, methods trunk locking and others.), creating a historical period of the sample and the general development of laws. Failure to do so would be to talk about elementary failings such authors here, eg, the Pearl:

«…at 1949 stamping, the Soviet could not ensure the quality of boxes barrel Kalashnikovs«

The merit Hugo Shmayssera give two samples: submachine gun MP-18 and an assault rifle StG-44. They both appeared at the end of the two world wars, identified certain milestones in the history of both for a long time were not taken seriously, while in the first case of a war in South America using German submachine guns, and then a Kalashnikov rifle in Vietnam have not declared on the approval of a new class of small arms.

so, MP-18. first, where to begin, it is a refutation of the myth that, that the submachine gun was developed on the instructions of the German General Staff as an offensive weapon for the German storm troopers and allegedly even used them in one of the offensive operations. A document signed by Ludendorff and Hindenburg, approving the terms of reference for the development of sub-machine gun as a weapon for the assault groups, nobody has seen, and although this is not proof, it does not exist, there are lots of facts, indirectly confirms, the first sub-machine guns were developed as defensive weapons. This is primarily a store location, reducing the profile of the arrow when firing of the trench - laterally at the MP-18 or top y Beretta Model 1918.

Initially, the service staff MP-18 consisted of two fighters, one of which was the porters of ammunition. Somehow doubtful, that was involved in the assault operation warrior, whose main responsibility was to equip shops and give them a fighter, armed with machine guns and being in constant motion.

-Knowledge of the second feature of the tactics of warfare, established in the PMA. I will not dwell on it, but that it influenced the emergence of a new class of weapons - machine gun, in the development of ideas which later came under automatic pistol and an intermediate cartridge. Schmeisser in the dance of these events occupies the same place, Fedor, Revelli or Šoša, the first machine gun which "nedopulemetom" referred only idiots. Not least because, Shosha that gun even though he was terribly unreliable, but there was time and played a role.

answer (or parallel decision) to create chauchat was to create a machine gun under the pistol cartridge, held its short evolution: by dvuhstvolny aircraft variant Villar Perosa, move in trenches and transformed to the usual embodiment of the automatic carbine samostrelnogo.

The appearance of automatic weapons under the pistol cartridge - a natural result of technological evolution, rather than momentary brilliant insight, as they like to think of people, not versed in the laws of development. Revolution in development can only be a scientific discovery in the related field, eg, invention smokeless gunpowder and development based on its unitary cartridge, helped to create an automatic semi-automatic, and then samostrelnoe weapons.

Usually, at this stage of the invention and innovations are mushrooming, inventors weight, developers, Entrepreneurs are trying to stake out their plots filing patent applications, bring to market raw foods, trying to chop off a piece of, stifle competition, engaged in industrial espionage, plagiarism. In other words, It is a common struggle for existence by the selection of the more powerful and arrogant, Sir Charles Darwin called "natural".

At the stage of the evolution of the transformation of prototypes. For prototype submachine guns were guns with automatic gunfire and a rigid holster instead of a butt and a carbine pistol cartridge. Some of this was issued and Theodore Bergman factory, where they worked designer - Louis, brothers and sisters, father Schmeisser.

Relation to military affairs, these samples were not, and intended mainly for sport and hunting.

Referring now directly to the MP-18 structure, which uses patents 319035 and 334450, authorship attributed to Schmeisser, and the applicant is Theodor Bergmann.

In the formula, the patent 319035 declares two attributes. The first relates to the shutter device, wherein the striker is movable and which abuts reciprocating action spring. The second - locking method shutter at the rearmost position by the engagement of the bolt handle cutout in the receiver. There is clearly traced prototype - the types of windows or door latch. From the point of view nothing genius, not to circumvent the patent small blood, not visible. 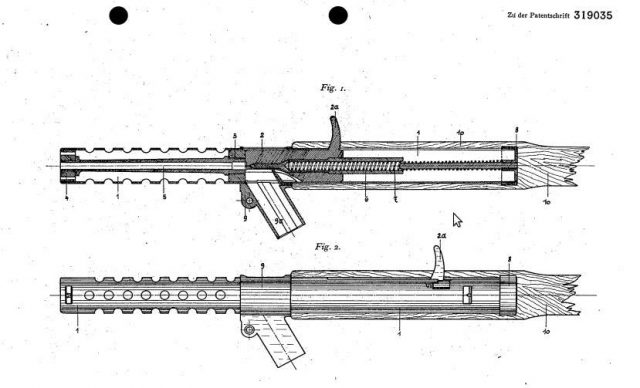 Briefly about patents in general. Patent Value determined, how difficult and expensive to work around it, and around it, you can always. Mark decides to market, if there is a Designer, which will offer a similar solution, eg, engage the handle for no cut in the receiver, and for the cut in the forearm, the price of such a patent, you know what. Another thing, eg, hole in the end of the needle in the sewing machine or on the knife blade Spiderco. By any stretch, get harder and not smarter, it is easier to pay the author.

The patent 334450 It describes a method for closing a folding box a latch bolt, for work that uses the power of reciprocating mainspring. Here it is the invention of the category of very high category. One part is used to perform the three functions. Those familiar with TRIZ understand me immediately. A similar solution is used in Kalashnikov rifles, difference is, he locked receiver cover, and in all Schmeisser box, rotating swivel. 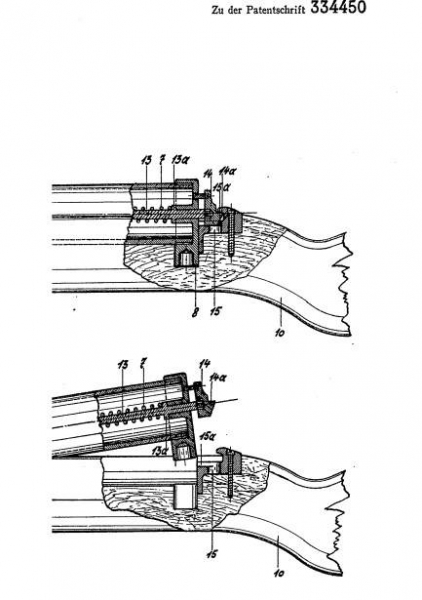 But. Using the force of the spring for the three functions - that's great, but the detailed drawing in the patent - this is too much. therefore, When Bergmann did not allow to make Schmeisser MP-18, Şmaysser, to go beyond the limitations of their own patent (unless he was really the author), just changed and the shape of the spring latch node in MP-28.

Of course, we can not ignore the thorny question of MP-18 championship or Beretta M1918. I have to say: it does not make sense. What point will be denoted championship? The date of adopting? But two samples, adopted with a difference of a few months, They speak only as of the quickness of staff officers, a little faster to execute documents. The date of filing on separate nodes patents, used in the final product? In this case, wins Italian, since it uses solutions, patented in 1915 year.

The emergence of submachine guns - a natural stage in the evolution in technogenesis. Conceived as a defensive trench, gun went their way, and as a police officer, and as an assault, and as a personal compact, this, as MP-40. The role of Hugo Schmeisser (as a designer) to create one of the first examples is well deserved. In general, successful development of the simplicity of guaranteed victory in the competition and the adoption of its service in the German army.

Such an achievement turned the heads of the young inventor. On the horizon loomed the glory of Isaac Merritt Singer. Get away from Bergman, to create their own production, patenting their developments, crush their competitors and thrive in the glory of genius inventor. Is this not a desired goal, in the words of Prince of Denmark.

In fact, it was much more difficult. Attempts to create your company «Industriewerk Auhammer Koch und Co.» management rights to patents and Hans Hugo Schmeisser led to, that it was operating at a loss, and came to the actual bankruptcy, threatening to deprive the brothers the rights to all of their patents. It was necessary to create a new, "Brothers Schmeisser", and to transfer the rights to it.

New developments could not find buyers, Just can not imagine any commercial interest or did not bring the expected profits. The case ended with the capture raider company Carl Gottlieb Henelya after his death. His young son, Not being able either to technical creativity, or to administrative matters of company management, I went on about the two brothers, giving them a third of the shares in the company of his father. At the same time the brothers played for the job with Bergman to its fullest. In addition to salaries, they began to receive interest for the use of their inventions, dimensions and established themselves, so the brothers repeatedly revenues exceeded revenues of owners - family Henel.