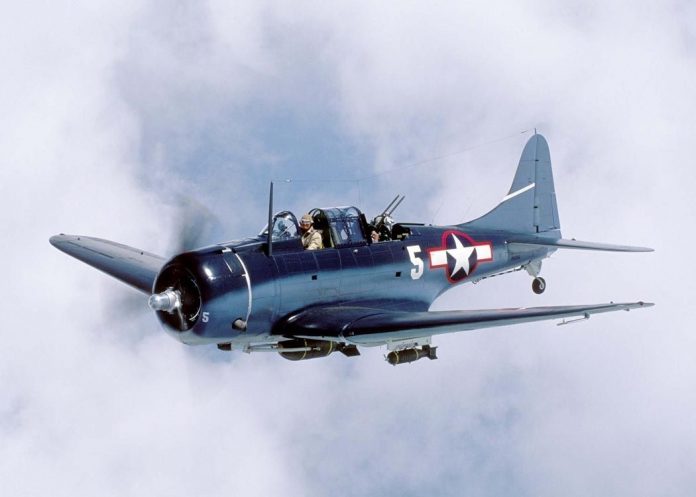 Continuing the theme of aircraft, who did things during World War II, answering one of the questions, I want to say just a few words.

Well, Flying Fortresses are not interesting to me as objects of consideration. What a merit: gathered shobla in 500-1000 aircraft, brought along a couple of hundred fighter jets, flew and turned into crushed another city?

Sorry, flying club from 1000 "Fortresses" - Pithecanthropus weapons. You can criticize Ju-87 and Pe-2 as much as you like, but it was a sword for precision work. Because all these B-17s, B-24 and B-29 leave for a very distant sweat.

And our hero today was from a completely different opera. Douglas SBD «Dauntless» (will go further in Russian transcription), perhaps, this is the most famous naval (deck) US bomber. 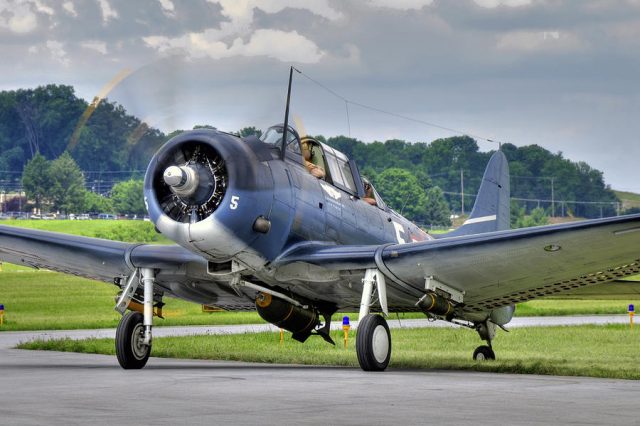 His story is very remarkable, that it was decommissioned before the start of the war, but it turned out, that the plane took part in all the major naval battles. Furthermore, it was the "Fearless" drowned the cream of the Japanese fleet throughout the war, and for 1942 the year it was the crews of these aircraft who sentenced more Japanese ships, than all other sea planes combined.

I would translate Dauntless as Crazy. Towers, At first, did not have, and secondly, really, to fight on this bomber, you had to be a little less titanium guy, than the pilot torpedo bomber "Swordfish". 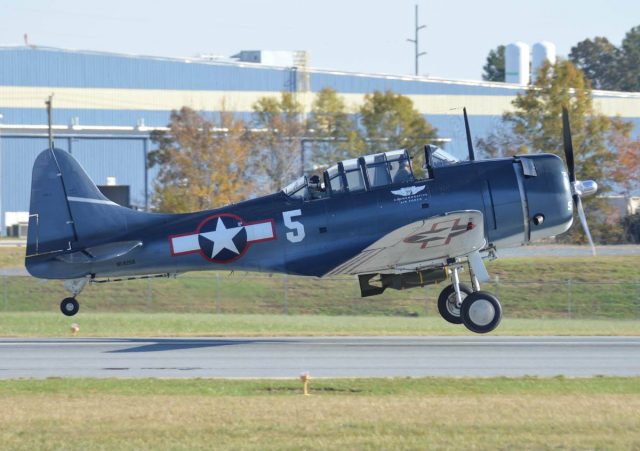 so, the story of the hero of the battle of Midway begins, which became the Pacific battle of Kursk and after which the Japanese imperial fleet by and large, He said: the end, that is, "everything".

It all started in 1932 year, when someone John Northrop left Douglas Aircraft to establish his own company in El Segundo (California).

Douglas were practical guys, and, considering Northrop a genius in terms of aeronautical engineering, helped with money and generally tried to make friends, since it happened.

Looking ahead, I will say, that it was worth it. John Northrop really was a cool engineer, creating truly advanced aircraft. Only sometimes they were very expensive. And yes - R-61 «Black Widow» and AT 2, who went into the series after Northrop's death - as an example. 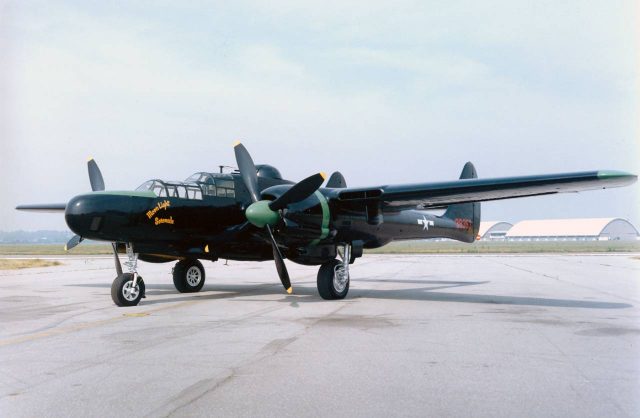 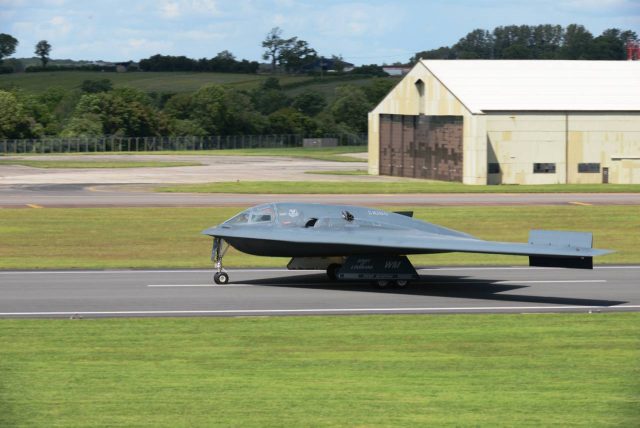 During his time in his own company, Northrop created some really successful aircraft., very decent characteristics (Gamma and Delta), long time working on US mail lines.

But Northrop's finest hour came at 1934 year, when the Naval Bureau of Aeronautics announced a competition to develop a new specialized dive bomber. It's time to change a bunch of old biplanes of different brands for something more modern.

Brewster, "Martin" and "Voot" proposed biplanes for the competition, therefore, the project presented by Northrop, an all-metal monoplane with a bearing casing and a lower wing, was recognized as the best.

The prototype was called XBT-1 and went up the test steps..

The plane had many innovations and advanced solutions., not used before when designing aircraft. The plane was an all-metal low wing, main landing gear retracted into fairly large fairings on the bottom of the wing, leaving the lower parts of the wheels half open.

For the sake of strength, which is necessary for a dive bomber, Lead Designer Heinemann Applied Honeycomb Wingless Frame Structure. This is not an innovation., such a wing was on Northrop's first Alpha postal plane, and then it was successfully applied by Douglas in its DC.

But there was a problem: honeycomb wing design did not allow the folding mechanism of the wings, and ordered a sea-based plane!

Oddly enough, but the XBT-1 was the only winged aircraft of this design, adopted by the US Navy. For, to somehow compensate for the lack of folding wings, Heinemann reduced the size of the aircraft so much, as far as possible. As a result, it was one of the most compact bombers in the world.. 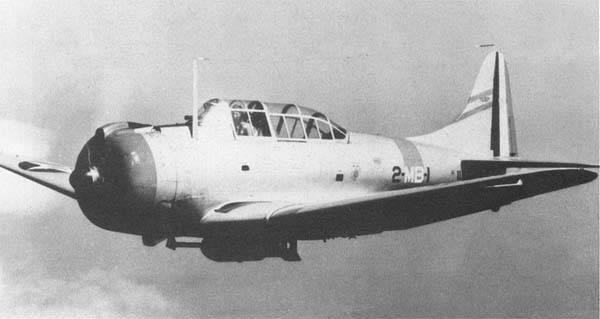 Then there were tests, based on which 1936 US Navy ordered a series of fifty-four vehicles under the designation BT-1. New dive bombers became part of the air groups of the new aircraft carriers "Yorktown" and "Enterprise".

And then the trouble started. New bombers just showed a bunch of problems, which had to be taken more than seriously. Exchange rate instability at low speeds, low efficiency of ailerons and rudders at low speeds, and the aircraft’s ability to spontaneously start twisting the “barrel” with a sharp increase in engine speed, generally led to several fatalities.

Generally, The Naval Bureau decided not to order BT-1 anymore.

It seemed, all? And here and there. The pragmatism of the Americans played a certain role here., and the contract included the costs of creating the next prototype. It saved everything, and while the bureau was feverishly thinking, what to do with the suddenly flightless happiness of the VT-1, Northrop calmly analyzed what happened, made conclusions and started work, good, funds for this were also laid down in the contract.

The engine has been replaced. (Twin Wosp Junior on the more powerful 1000-horsepower Wright XR-1820-32 Cyclone), two-blade screw replaced with a three-blade, Yes, and a variable step. And nothing! XBT-2 showed nothing different from its predecessor. The problems remained the same..

Northrop did not give up, and negotiating with NASA, drove the plane into the wind tunnel. And so, finally, source of problems was found.

The bomber was aerodynamically ennobled. The main achievement in this regard was the fully retractable chassis. The hefty fairings of the semi-retractable landing gear disappeared from the underside of the wings and the main struts now completely folded in the transverse plane, cleaning the wheels in the niches of the lower fuselage. The cabin light has also been redesigned.. Heinemann went over 21 tail version and 12 various aileron profiles, before satisfactory configuration was found. 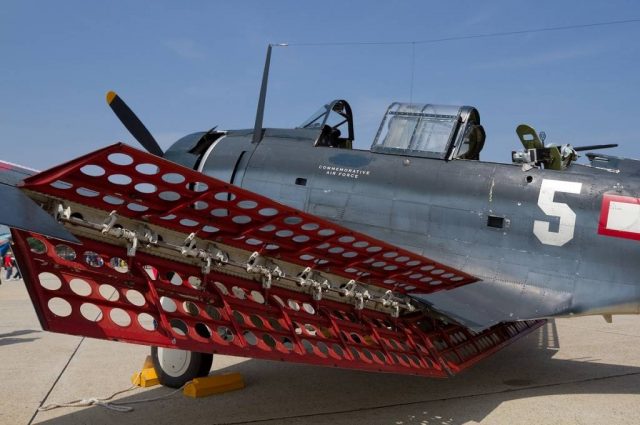 While the lead designer fought with the machine, Northrop lost to Douglas and surrendered. And the seemingly independent Northrop company has become part of Douglas, from which, properly, and budded.

But the plane passed all the tests in 1938 the year was followed by a new order for 144 Aircraft, dubbed SBD-1 (scout bomber Douglas - Douglas reconnaissance bomber). The change from B to SB was due to, that the abbreviation "B" was assigned to multi-engine bombers.

Although the renaming did not at all entail a review of combat missions. 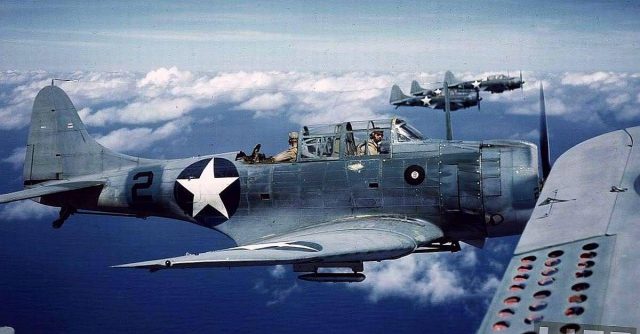 Nevertheless, the plane was "damp". weapon (two directional synchronous machine guns 12.7 mm and one for protecting the rear hemisphere 7.62 mm machine gun) took place to be, bomb weapons too (one bomb weighing up 726 kg on the ventral pylon, and two bombs weighing up 45 kg or two depth charges on wing pylons) also attended, but there was no reservation at all.

Despite the lack of armor protection for the crew and some other "jambs", the aircraft was adopted and the first SBD-2 received aircraft carriers Enterprise and Lexington.

They were the first to receive baptism of fire, since fateful morning 7 December 1941 years, Enterprise was located in the Pearl Harbor area, returning after delivering six wildcats to Wake Island. 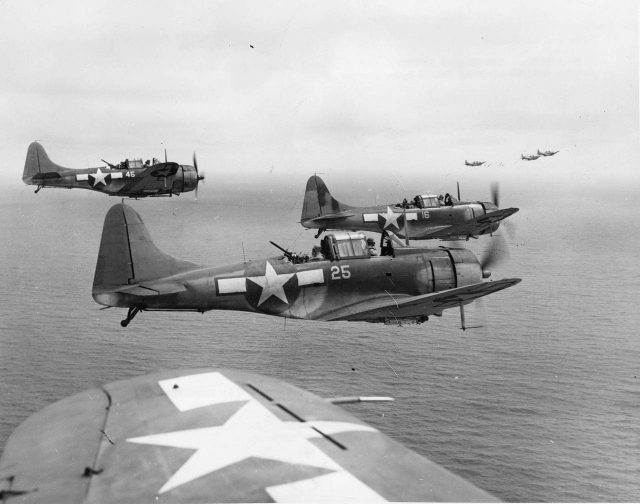 Eighteen SBD-2s were lifted into the air for reconnaissance in the area west of the aircraft carrier before approaching Pearl Harbor and fell into a nightmare, arranged by japanese aviation.

Seven SBDs were shot down, however, the Americans shot down two Zero. So the bomber opened his combat account in that war.

And literally in three days, 10 December, Lieutenant Dixon destroyed the submarine of the Japanese Imperial Navy I-70. First enemy warship, drowned USA in World War II, was drowned by downtless. And - I note - far from the last.

Further more. After Pearl Harbor, Americans mostly raided Japanese positions, rather, disturbing plan. But in the spring 1942 of the year, protecting Australia from a possible Japanese fleet attack, the Americans fought a battle, dubbed “The Battle of the Coral Sea”. 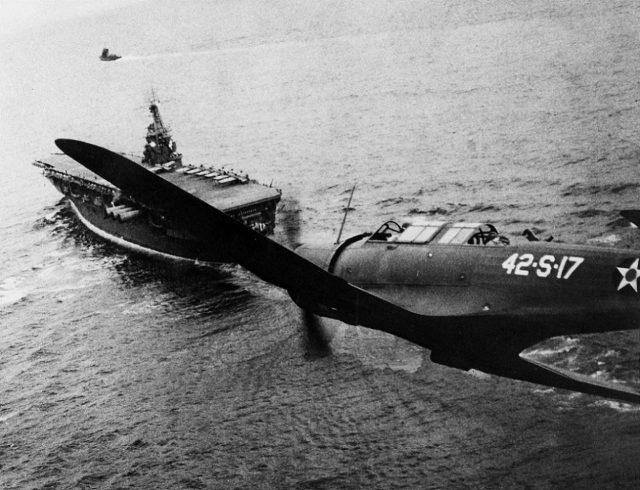 Yes, the Japanese did not stay to cry in the corners and drowned the Lexington, but abandoned the conquest of New Guinea and Australia. 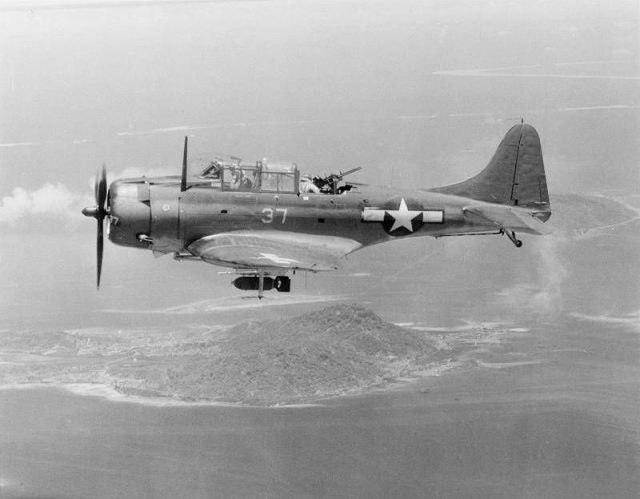 At the end of spring 1942 g. SBD-3 appeared, which was the final prototype brought to mind. All tanks were protected, bulletproof glass appeared in the cockpit light, crew armor protection, 7.62 mm machine gun, defending the rear hemisphere was replaced by a pair of the same machine guns.

Next was the battle of Midway. 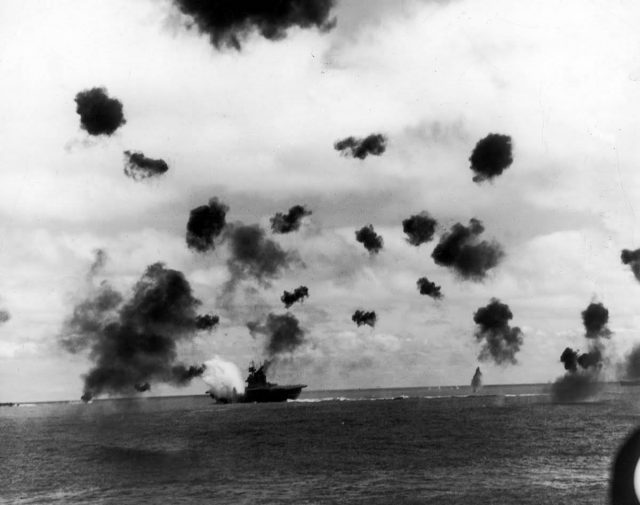 All, generally, I know, how wrong was Admiral Nagumo (and more than once), everyone is already in the know, we should focus on the tactics of the work of Americans. 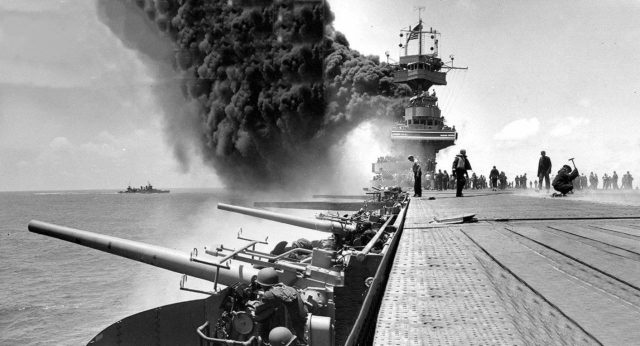 Yes, without fighter cover, the Devastator torpedo bombers suffered catastrophic losses from Zero attacks and anti-aircraft artillery fire. Of 41 the torpedo bomber involved in the attack returned to their ships only four.

But while the Japanese fighters were busy killing the last TBD, fifty Dauntlesses approached. Fighters, who worked on torpedo bombers, flying at low altitude, just did not have time to do anything. And the diving "Reckless" did their job. 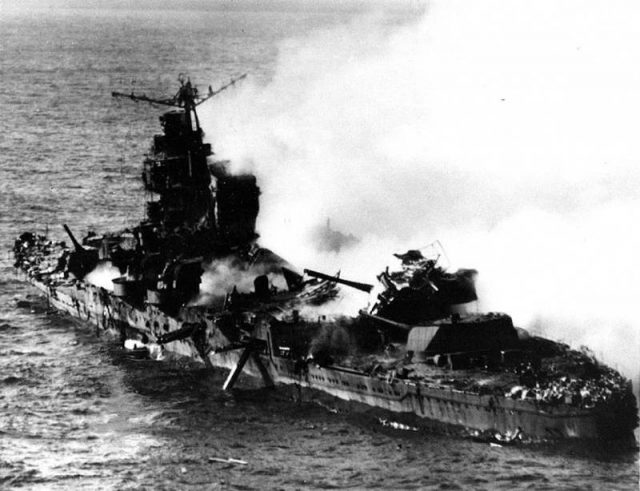 "Akagi», "Kaga" and "Litter", decks which were lined with airplanes, preparing for take-off, loaded and equipped bombs and torpedoes, turned into flaming ruins.

"Hiryu", who walked somewhat away from the main forces, remained intact and fired all his planes against Yorktown, which could not withstand the attacks and was left by the crew.

But the Downtowns from the Enterprise and the already failed Yorktown butchered Hiru as the god of the tortoise. 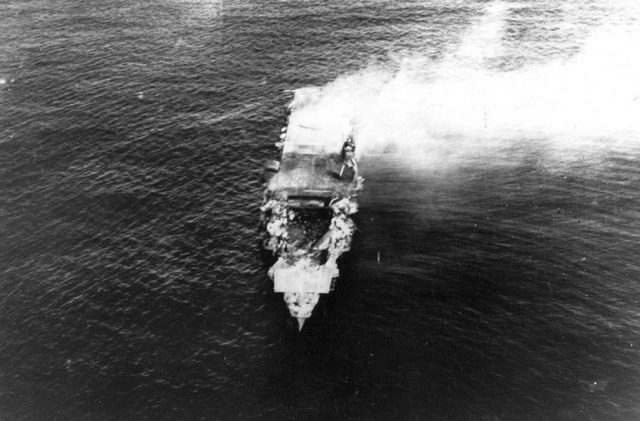 The Japanese ship burned for a long time and was eventually flooded by the crew the next day.

Many historians consider the Battle of Midway to be a turning point in the war in the Pacific. And they do it quite rightly.

Но даже когда на палубах авианосцев уверенно прописался «Хеллдайвер», «Даунтлессы» не пошли на распил, but were transferred to the Marine Corps and fought from land airfields as if nothing had happened until the end of the war.

What can be said about the plane? The plane was good. When handling problems were resolved, everything was just perfect. 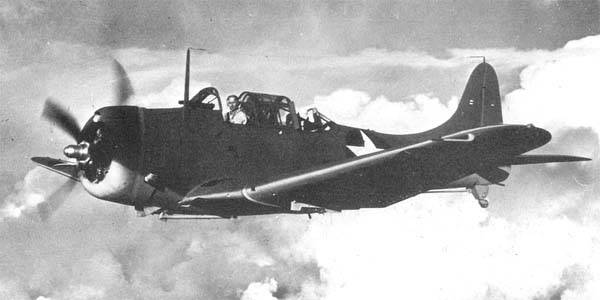 Yes, SBD did not shine, This is true. But he especially did not need her, because if the "Dauntlesses" took enemy fighters, then a second salvo of airborne weapons and the ability to maneuver would be more valuable.

Generally, очень заслуженный самолет, having passed his combat path with honor and most importantly - effectively. 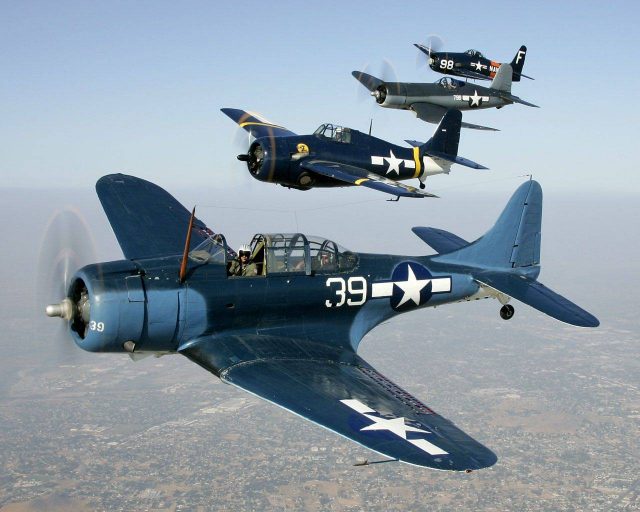