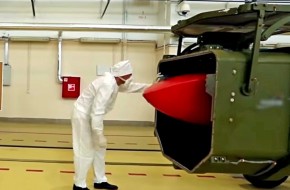 One of the most talked about news of the previous presidential address to the Federal Assembly became a cruise missile (KR) 9M730 "Petrel" with the superpower nuclear power plant (Yasu). However, since then it has passed almost a year, and information in the media about this unique weapon hardly appeared. In Vladimir Putin was limited to the current address of a phrase, that "Petrel" tests continue.

Recall, the existence of such a missile, the world learned 1 Martha 2018 of the year.

In his message to the Federal Assembly, Putin said, that at the end 2017 at the central range of the Russian Federation (new Earth) KR passed the test with a "virtually unlimited range and unpredictable flight path"

Based on the demonstrated chart, "Petrel" capable approximately twice round the Earth, overcoming marine boundaries intercepting PRO-VOP (an obvious allusion to the futility of US investments in global missile defense system). According to the President, Yasu is so compact, that can fit in a housing of a cruise missile airborne X-101.

"During the flight power plant reached the set output, to provide the necessary level of traction. Conducted missile launch complex and ground tests allow you to jump to the creation of a new type of weapons - strategic nuclear weapons complex with a rocket, equipped with a nuclear power plant ", - said Putin 2018 year.

The idea of ​​equipping aircraft (aircraft) smaller than the other nuclear power plant originated in the United States and the Soviet Union back in the 1950s,. The planes of the two powers have consumed too much fuel and could not fly at supersonic speed in besforsazhny mode (Afterburner provides increased fuel consumption). Looking ahead, note, that this problem is by and large not yet been solved.

In addition to aircraft, Yasu could equip satellites, spaceships, drones and, of course, missiles

However, along the way, scientists are faced with many problems. Almost all of them were related to safety. Use of a nuclear reactor as a heat source within circuit ramjet engine led to radioactive contamination of the atmosphere.

To minimize the exhaust of combustion products, Soviet engineers intended to use a hybrid scheme using Yasu. The rise of the aircraft in the air had to be carried out in the usual engine., and the reactor start-up could take place only after the climb.

This scheme is intended to realize a nuclear-powered aircraft project Tu-119 (on the basis of the strategic bomber Tu-95).

The machine had to climb with two turboprop engines on aviation kerosene.

The remaining two engines, pitavshiesya of Yasoo, We started working at an altitude of several thousand meters

Thus it was planned to minimize the risk of radioactive contamination.

However, the ambitious project was shelved in the mid-1960s. In expert circles there is no consensus about the reasons for the suspension of work. Some specialists believe, that the Soviet government sought to save money and found it more effective to develop refueling aircraft and sea platforms. Nuclear-powered aircraft did seem (and still remains) very fantastic example of LA.

Another part of the experts insist, that the termination of the development of the Tu-119 was the result of unresolved safety issues. To understand this point of view is easy: Even the most reliable airplanes sometimes fall. What will happen, if the machine with a nuclear reactor on board crash in the area of ​​a municipality or directly to a huge metropolis? In the context of the Cold War, when a civilian airliner is often mistaken for a spy plane, everything could happen, anything.

Another sobering became a disaster, occurred 24 January 1978 of the year. On this day, the Soviet satellite "Cosmos-954", equipped with a nuclear reactor weight 1,2 tons, I descended from orbit.

its fragments, not burned in the atmosphere, It fell to the north of Canada, infecting part of its territory

true, damage was relatively small. In no time, American experts gathered 90% wreckage. In total, it was found near 100 weight fragments 65 kilograms. Radioactivity was some debris 200 roentgen / hour. The Soviet Union was lucky, that in the zone of the dispersion of the fragments were not resident civilians. As a result of the accident no one was hurt, but Moscow was forced to pay monetary compensation to Canada in a few million dollars.

Accidents with satellites, working on Yasu, happened and the Americans. AT 1964 and 1968 years ended in failure attempt to launch "Transit-5B" navigation satellite and meteorological apparatus "Nimbus-B". By a fluke of casualties was not, although crashed "Transit-5B" radioactive trail left in the atmosphere.

At the moment, the only relatively safe way to use the jar on the aircraft - a scheme with intermediate heat carrier and heat exchanger. It allows not to get products of combustion into the atmosphere. However, its disadvantage is the cumbersome structure (It represents a piping network). In other words, in any such cruise missile propulsion thrust is simply impossible.

It follows a logical conclusion, that for the safety of the environment flight "Petrel" is possible only at a height of 15 -20 km. However, this contradicts the principles of the use of cruise missiles.

To give the missile maneuverability, Designers deliberately sacrificing speed (about 800-900 kmh) and an emphasis on stealth. KR flies relatively long (so much so, that can be knocked out of the ordinary fighter aircraft cannon), but the probability of hitting the target (in case of not detecting) she is quite high. "Petrel", eg, can stay in the air space is ten times longer than the American "Tomahawk" (about two days).

In comments You-Tube channel "Special" in July 2018 year Doctor of Technical Sciences, said Igor Ostretsov, that create a cruise missile with Yasu impossible. In particular, as a scientist says, KR is in principle not able to fly at low altitude at supersonic speed. He also reiterated the need to use "Petrel" ramjet engine, leaving a radioactive trail.

but, Do we have reason not to trust the Russian president, who declared, that such a missile there and successfully tested? Likely, the solution is, 9M730 that was actually created. But as the main engine, it uses a conventional jet propulsion system. Yasu only runs on environmentally friendly height, to overcome the necessary distance to the target.

The lack of fixed radioactive contamination confirmed this version during the test. (If infection with Yasu start really happened, the Americans were the first bragged about it to the whole world).

Not be overlooked, that "Petrel" - a strategic weapon, that is, it is equipped with a nuclear warhead. Combat use of the missile is only possible after a nuclear attack on our country (it follows from the received RF retaliatory strike concept). In this case no longer has the value, which engine uses 9M730, maneuvering at low altitude for a subsequent attack against the enemy. Nuclear apocalypse still inevitable.

Of course, we can only guess, but with high probability "Petrel" is the so-called doomsday weapon. Likely, Rocket included in the "Perimeter" system ("Dead Hand"), which is designed to provide a guaranteed start-up of all its Russian nuclear arsenal after the destruction of enemy political and military hierarchy, part of the ground launchers, as well as sea and air carriers.