As a betrayal of Gorbachev has created a unique missile system 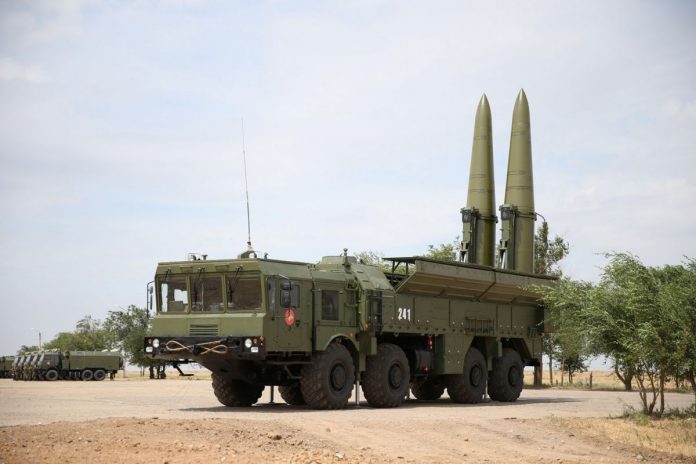 Thirty years ago,, 7 November 1988 of the year, Secretary General of the CPSU Central Committee Mikhail Gorbachev, under pressure of Sergei Invincible decided to develop tactical missile complex "Iskander". And before that decision Gorbachev's predecessor was destroyed, "Iskander", complex "Oka" - and the leaders of the Russian military-industrial complex can not forgive is the secretary general still. Why?

Dialogue with the leader of the Communist Party chief designer held a reception in the Kremlin, dedicated to the anniversary of the Great October Socialist Revolution. The occasion was directed to Gorbachev so-called letter of six (signed by the Minister of Defense, Chairman of the Committee for State Security, Minister of Defense Industry, Chief of General Staff, Chairman of the Military-Industrial Commission of the Council of Ministers and the President of the USSR Academy of Sciences). The letter proposed to start development of the latest operational and tactical missile system - instead of being destroyed PTRC "Oka".

Destruction of the Treaty on the Elimination of INF most perfect in those years of operational-tactical missile complex "Oka" general designer of the Kolomna Machine-Building Design Bureau (KBM) FROM. P. Unbeaten considered treason. And traitor - of the General Secretary of the CPSU M. FROM. Gorbachev, who put his signature to the above-mentioned document and gave it to the mercy of the Americans OTR-23 (the western qualification SS-23) - the famous "Oka". It had a maximum range of fire 400 km, and therefore it did not fit the parameters agreed by the parties "shorter-range missiles", which "is equal to or exceeds the 500 km, but does not exceed 1000 km ".

So read item 6 articles 2 Treaty between the Union of Soviet Socialist Republics and the United States of America on the Elimination of Their Intermediate-Range and Shorter-Range Missiles, which the 7 December 1987 in Washington signed a general secretary of the CPSU Central Committee Mikhail Gorbachev and US President Ronald Reagan.

«Some obscure seemed the contract between the two superpowers, - recalled Invincible. – The Parties agree on equal arms reduction, but suddenly one party voluntarily accepts the destruction of weapons, the type of which is beyond the scope of the document. When this is done absolutely no explanation for any of the people, nor for those, who created this weapon. This is a total of more than 100 thousands of people in dozens of KB, Research institutes and enterprises in the country».

American side Background Action to include all costs in the OTR-23 contract is quite clear. NATO Experts then noted, that "massive use of missiles SS-21 and SS-23 ("Point" and "Oka") give the enemy (ie the USSR) significant benefits, if you do not take additional measures against Soviet missiles ". It is worth recalling, that the combat troops with conventional charges on these missile systems have changed on the nuclear warheads just 15 minutes.

experts stress, that after the destruction of missiles "Temp-S" (SS-12) and "Oka" the enemy would lose the ability to apply an effective blow to the NATO air bases with the help of non-nuclear missiles. As a result of the North Atlantic bloc would be able to concentrate their efforts on the development of measures to combat only with the "point", and the chances of creating an effective air defense system would be significantly increased. According to the academician Invincible, for the development of a program to missiles "Oka" US military budget would have to spend at least 100 billion. dollars. And so the OTR-23 decided to destroy diplomatic means.

Delivery of "Oka" started in April 1987,, When in Moscow, Secretary General Gorbachev, Minister of Foreign Affairs of the USSR e. A. Shevardnadze and US Secretary of State J.. Schultz discussed the parameters of the future of the INF Treaty. The decision not affected and a memorandum setting out the positions of both sides and possible recommendations. His specially prepared for the visit of Shultz Secretary of the Central Committee of the CPSU, Head of the International Department of the Central Committee A. F. Dobrynin and Chief of Staff C. F. Akhromeev. Warlord even insisted, that was highlighted in the memorandum, that the US will seek the inclusion in the contract OTP-23 (SS-23), but it can not agree. Gorbachev and Shevardnadze agreed to ...

Later Marshal Akhromeev, courage, I asked the Secretary General: why he was so radically changed the Soviet side position? Gorbachev was first referred to the fact, he forgot to Prevent, contained in a memorandum, and then he said, that the disarmament process need a good speaker, and this decision will accelerate alleged isolation of many international problems.

Of course, there were alternative views - mostly from the military, are well aware of the price of the solution "to accelerate the dynamics of disarmament" in this way. Why not upheld "Oka"?

Much later, Marshal D. F. Yazov, answering this question, He said: «We destroyed the high discipline - party and military. We fought and argued only until, until the decision. Then we performed, sometimes with pain and blood, as it was with "Oka".

From "Oka" to "Iskander"

It was not easy With the head of the MSC. P. Invincible to accept the irreversibility of this heinous process - destroyed "Oka", It became largely the pinnacle of creativity Kolomna raketostroiteley.

«Our company literally "shot on the rise", because under this contract ceased work on more sophisticated products - PTRC "Oka-U" and front-line operational and tactical "Volga" complex, - recalled Academician. – We had to find some way out of the vicious circle. the main thing, to have not been in vain labor, experience and intellectual potential of MSC and its subcontractors, which was embedded in the sentence of destruction facilities».

The elimination of "Okie" was not the end. «The contract was given its parameters: size and weight, and further developments, we could not exceed their, - emphasized the current Chief Designer of JSC SPC "KBM" doctor of technical sciences Valery Kashin in an interview with the weekly "Independent Military Review". – We were not allowed to go beyond the dimensions and weight of "Oka", so our new complex "Iskander" was initially limited in its tactical and technical characteristics (PBF)».

Invincible proposal to develop a new PTRC was supported by the General Staff of the USSR Armed Forces, task was to prepare a letter to Gorbachev. Its essence is as follows: based PTRC "Oka-U" and "Volga" to spend development of operational-tactical missile system for the Army with a range of 300 km. And there was sent to the general secretary "The letter of six". I was already 1988 year… 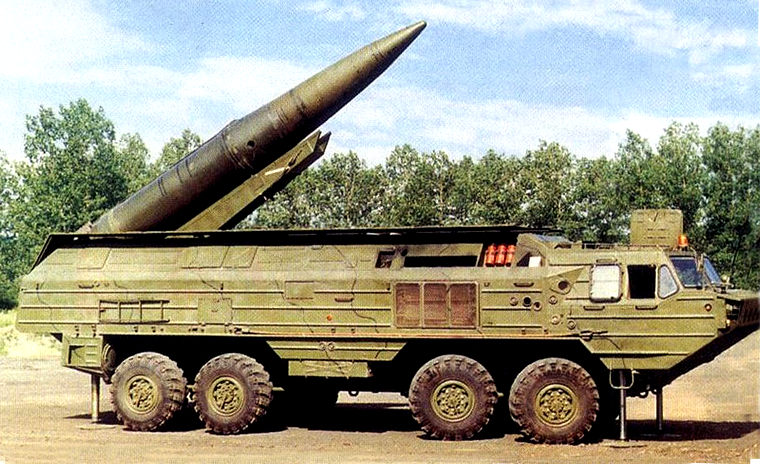 This message Invincible and reminded Gorbachev 7 November at a gala reception in the Kremlin. In addition, the academician knew, that this letter stands Visa General Secretary of the CPSU: "I agree", but then it's not moving. After listening to the designer, Gorbachev said, that will decide in the next few days. Conversation was short - a minute or two. But the secretary-general kept his word: after some time had been prepared and appropriate disposition of instruction Kolomna Machine Building Design Bureau works to create PTRC "Iskander" with refined performance characteristics.

Work on the new product launched. According Unbeaten in his book "Weapons of two eras", "At the time of the adoption of the resolution on" Iskander "we're on your own risk completed a large part of R & D (research and development activities) and their costs almost 20 million. rubles - sum in those days a great. We already had made preliminary design of "Iskander".

Spent on the creation of "Oka" and "Volga", manpower and resources are not wasted, allowed to formulate new ideology of building a missile complex "Iskander".

Its performance characteristics, as the name - the second name of the ancient conqueror Alexander the Great - give the customer. Firing range missile was 280 km, and on this indicator retreat from previous products was significant (u "Oki" - 400 km). But there was another position, which was forced to step back KBM. The thing is, that the battle of the new PTRC involves the use of high-explosive, cluster and other charges with conventional explosive, and the use of a special combat unit the customer has been ruled out from the outset.

«American concept allows limited use of low-power nuclear weapons, to prevent a large nuclear war. And we will respond in such a case,, if we warhead RK "Iskander" it will be equipped with conventional explosives? - I wondered Invincible. – Deprive the country of the ability to withstand a strong opponent, that we provide the nuclear warheads, not just short-sighted - it undermines national security».

But his arguments are not taken into account. «Then I, Alas, I understood the futility of striving to defend their point of view on the necessity of a special combat unit, - recalled the head of the MSC. – Psychologically, it was possible to interpret the situation like this: you were given the opportunity instead of "Oka" to make the new complex - and comforted by this, A big do not count. I knew it, but deep down feeling, This approach also goes around comes around».

And his fears that time more are confirmed in the day today. Near the Russian border there is a general build-up of NATO forces: in the former Soviet airfields and military bases in the Baltic States, Poland, Czech Republic all thoroughly grow roots NATO structures.

Now some analysts and military experts recognize, that the signing of the INF Treaty was a strategic mistake of the Soviet leadership. At the end of the 1980s we talked about this document as a first step towards nuclear disarmament, but at the beginning of the XXI century, it becomes clear, that other steps in this direction and no one has made an increasing number of countries are seeking to acquire not only a nuclear weapon, but also their means of delivery - the appropriate class missiles. 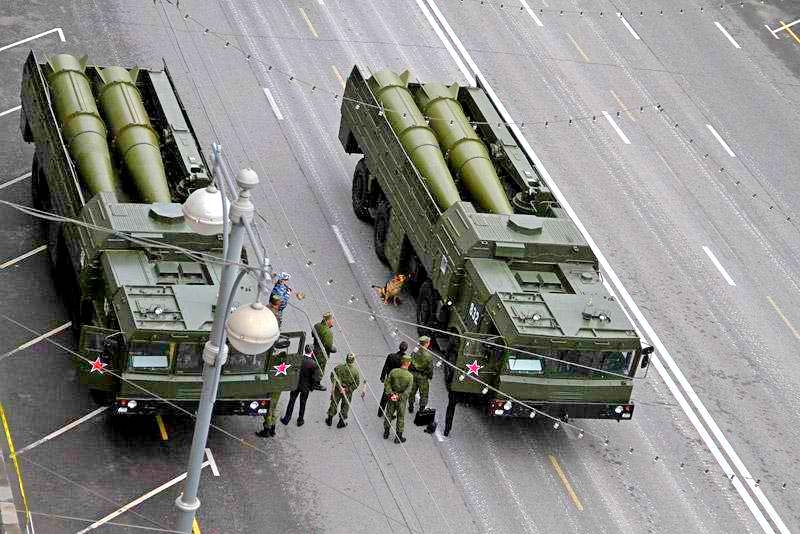 SP. Invincible claimed, that "parity" with the United States refusal to intermediate- and shorter-range missiles has become a trap for Russia. The Americans, destroying their respective missiles, both were, and remained overseas. Soviet-Russian missiles of this class is not threatened and not threatened by the territory's most States, and the US simply secured in Europe, its NATO allies.

Until now, domestic designers of military equipment and many of the generals can not forgive Gorbachev and Shevardnadze, that they have agreed to include OTR-23 "Oka" in the agreement on the elimination of.

Designer General of JSC SPC "KBM" In. M. Cashin said, What do you want, who takes such decisions, must know: sooner or later it will be given a legal assessment and will be responsible. «I have been insisting on a legal assessment, to bring the case to court, - stressed Valery Kashin in an interview with "NVO". – MSC specialists are ready to address this court with the technical justification for the prosecution position. Not in order, to punish someone, once again cast a stone at the then leaders of the country - just such a precedent should no longer be. It should not be applied to a huge national security damage for the sake of some short-term benefits of individuals».

As for the follower of "Oka", the "Iskander" adopted by the Russian army 2006 year. Now part of the Russian Ground Forces there 11 missile brigades, PTRC equipped with these various modifications with ballistic and cruise missiles.

According to the head of JSC SPC "MSC", on firing range, effectiveness and the ability to overcome missile defense system "Iskander-M" is much greater than the US Army tactical missile system ATACMS. "I do not like to brag, but I must say, that ORTK "Iskander-M" existing air and missile defense system to intercept missiles in the world can not aeroballistic, - says Valery Kashin. - That is why we say: Our range of best in the world ".