In the first decades of the last century, Argentina began the construction of its own arms companies. The new factory started with the production of copies of foreign weapons, and then proceeded to the creation of the first independent projects. In the thirties, the process has reached the area of ​​submachine guns. The first Argentine submachine gun became an experimental model called Lehnar. Little of, it was the first submachine gun, created in South America.

One of the participants was the development of prospective weapons designer Juan Lenar. By the early thirties, he had time to gain some experience in the development and manufacture of small arms. Besides, engineer carefully studied the available materials on various foreign models. In the early thirties X. Lenar decided to use all the knowledge and all the experience to create the next project. This time he planned to create the first Argentine submachine gun.

Looking ahead, it should be noted, that the first draft of the submachine gun Argentine development stopped at the experimental weapons testing stage. Ready sample has not been adopted by and, Consequently, I have not received the official designation, preserving one of the working titles. Currently, it is known as, formed from the names of its developer, - Lehnar или Submachine Lehnar ("Submachine gun Lenar").

Having an idea about foreign developments in the field of machine pistols, X. Lenar was able to generate an optimal appearance of new weapons in this class. From the standpoint of the basic ideas and making his project should have been in a serious way to resemble the existing development. At the same time there were some differences of one kind or another. recent, Firstly, They have been associated with the use of new devices and components. Besides, the designer did not deliberately simplifies the design submachine gun, which provided enough easy-to-handle product.

When good performance and neat finish, prototype submachine gun "Lenar" not complicated design and manufacturing. Most of the details of weapons should be carried out by stamping. Other technologies used in the manufacture of only a few parts, where the use of stamps was by definition impossible. A certain amount of permanent connections aggregates performed by welding.

From the point of view of the general layout of a submachine gun X. Lenar was a typical representative of his class, established in the interwar period. The weapon was to use pistol cartridge 9x19 mm "Parabellum". It was planned to equip the average length of the barrel, placed inside a protective casing. Simple Automatic shutter on free basis was mounted inside a tubular receiver. Like some foreign products, new Lehnar had to have a side feed cartridges. Also provided the use of a collapsible buttstock.

The project used a caliber rifled barrel 9 mm length of the order 22-25 calibres. Almost the entire outer surface of the barrel provided fins, improves cooling atmospheric air. The barrel located inside the tubular metal casing with several longitudinal rows of oval holes. In front of the housing there is a small conical flame arrester. Above him was placed the fly. The barrel together with the housing fixed on the front edge of the receiver.

Product from another angle

All the main weapon parts were placed inside a pair of housings, Assembly formed the receiver box. To set the shutter and the reciprocating mainspring intended upper cylindrical enclosure of sufficient length. In its front portion, behind the trunk mounts, provides two windows. Left intended for delivery rounds, right - to eject spent cartridges. Side windows in front and behind them a box covered two rings, by which proposed to establish a receiving device store. Bottom of the ejection window depart longitudinal slot average length, required for outputting the bolt handle. Rear pipe fitting lid, combined with clamp for connection to the lower part of the receiver.

Bottom to the tubular device with a few clamps joined polygonal unit. The front part of the device with a sloping bottom edge served as the auxiliary handle support, housed and the rear parts of the trigger. Ibid placed pistol grip fire control and butt hinge.

Juan Lenar used the most simple automation, characteristic for pistols- guns, - the weapon free to use the principle of the shutter. The shutter is designed as a massive block with a near-circular cross section. The shutter has a set of cavities and channels to accommodate some devices. On its left side cocking handle was attached. Behind his back propped up large-action spring. Separate drummer was not provided. As far as, This detail has been integrated into the mirror shutter. The fire was conducted with an open shutter. Before firing the shutter was allocated to the rearmost position and fixed in it sear.

Mastering a new trend, Argentine gunsmith was not afraid to use relatively complicated trigger mechanism, can fire in different modes. The shooting was carried out with the help of the trigger of the traditional type, camouflaged protective bracket. The choice of mode of fire or block performed with a movable flag on the left side of the housing USM. flag axis is near the axis of the trigger. Self check in all positions has been turned back.

In the uppermost position, the bullets "TIRO", checkbox to shoot single. Average position «AUTO» Provides automatic fire. Being shifted down, in position «SEG» he blocked the trigger mechanism and makes the gun safe. 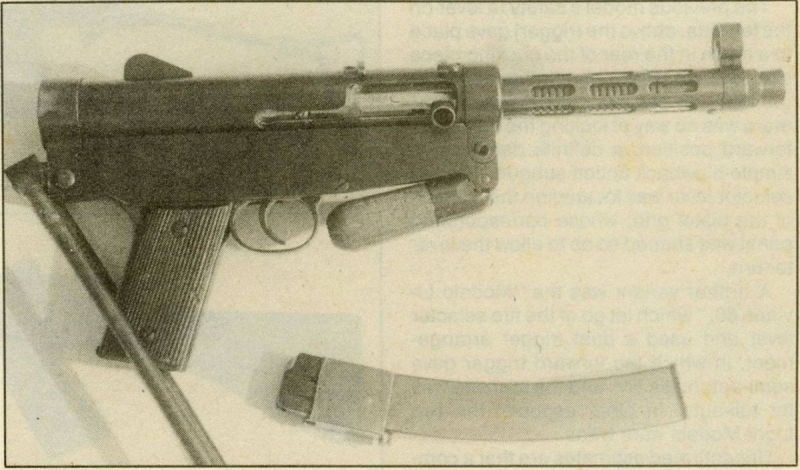 Submachine gun Lehnar was not the most difficult, but interesting enough ammunition supply system. 9x19 mm cartridge "Parabellum" were to be stored and fed from detachable stores sector with a slight bend of the body. In this case, the store is horizontal, and feed cartridges from left. Through the right window Automatic threw empty cartridges.

To set the device to use the store offers a curious design. The receiver, between a pair of outer rings, placed rover. It consisted of two main parts: an open tube with a large gap and a rectangular receiver latch. In the operating position the receiver is placed horizontally, to the left of the receiver. The major tube section coincides with a window ejection.

When the transfer of weapons to the stowed position of the receiver is asked to rotate by 90 ° clockwise (relatively arrow). Consequently, the receiving shaft provided on top, and its clearance coincides with the top of the receiver. receiver tube, in its turn, overlapping windows supply of ammunition and ejection. In this position the receiving device receiver box protected from dirt through the largest opening.

The submachine gun was the simplest sights. In front of the barrel casing in the annular bead was namushnike. Open sight located near the rear of the receiver. Loose-leaf rear sight can fire at a distance 100 or 200 m. The side walls of the sight protect it from external influences.

In his project X. Lenar care about the convenience of the arrow, and submachine gun got a pair of arms for retaining the right while shooting. At the rear of the receiver was a pistol grip with wood overlays. Before it was located the trigger guard. In front of the lower unit of the receiver was a hinge for extra vertical grip. Applied mounting means allows laying the handle under the receiver box. 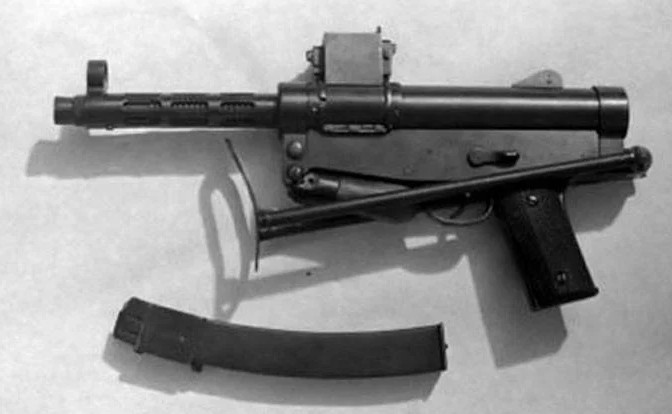 The weapon is also equipped with a folding stock, resembles some foreign units samples. Butt consisted of two rods or thin tubes of great length and the stop shoulder in the form of a bent metal oval. Butt joint mounted on the rear of the receiver. To reduce the size of weapons offered to put the butt turn down and forward. In this shoulder rest reached the bottom surface of the trunk casing, and longitudinal bars appeared at an angle to the longitudinal axis of weapons.

The total length of the machine pistol was Lehnar 700 mm. When the stock is folded length was reduced to 410 mm. Some sources indicated at the length of the folded arms 210 mm, but it is obvious, it's a simple mistake. Information about no weapons of mass. It can be assumed, that prototype weighed no more 3,5-4 kg.

The known data, SMG Juan Lenar on tests indicated rate level 550 rounds per minute. "Parabellum" chuck allows you to attack targets at ranges of up to several hundred meters at a maximum effective distance 100-150 m. easy to see, that firing characteristics submachine gun Lehnar were on par with other models of this class, existed in the early thirties,.

known, constructor X. Lenar has completed the development of its project in the early thirties. Soon, one of the Argentine arms companies produced the first prototype submachine gun. As it became clear later, the first prototype appeared at the same time last. Prototype, apparently, It was tested under conditions of shooting and, perhaps, proposed by a potential customer in the face of the Argentine Army.

According to all known sources, the armed forces and the police are not interested in the proposed Arms. The reasons for rejection of the first domestic machine pistol unknown. maybe, a potential customer does not see the point in the arms of a new class. Besides, we can not exclude the possibility of failure of the product due to the presence of certain shortcomings. Another explanation of these events may affect the limited financial capacity of the army or the inability to produce weapons of mass forces of the existing industry. 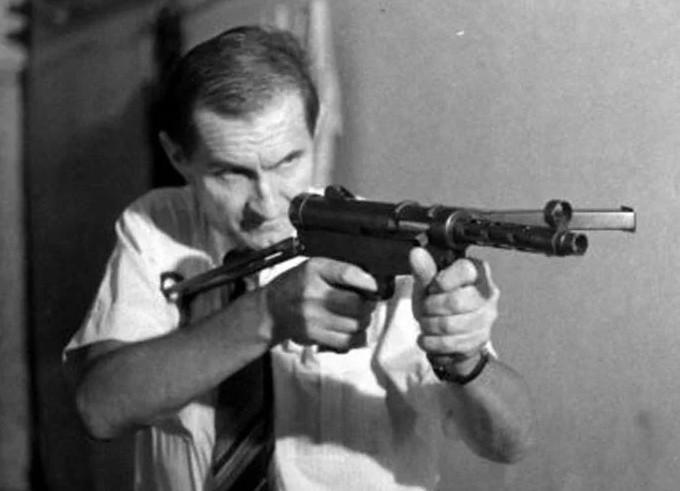 Submachine gun in his hands Lehnar Pantaleon Kotelchuka, the beginning of the 90s

Anyway, SMG X. Lenar has not been adopted by the Argentine armed and entered into a series of. Orders from third countries have been received. New weapons left with no real prospects. The designer was forced to abandon the work on an existing project. Subsequently, he participated in the creation of several new Argentine models of small arms.

More desired prototype "Lenar" went for storage. Very soon he was forgotten and actually lost. Several decades weapons remained unknown, until it was discovered in one of the Argentine warehouses. A unique sample, which became the precursor of a number of other projects of small arms, He returned from oblivion and has received well-deserved fame. Forgotten submachine gun found techniques gunsmith organization Registro Nacional de Armas (REINDEERS) Pantaleon Kotelychuk. Olive historian Ronaldo helped to disseminate information about the unknown sample.

As far as, in the early nineties only made submachine gun X. Lenar was in one of the offices of RENAR. Information about his future no. There is reason to believe, he remained in the warehouse of the state organization, which remains to this day. At least, news on the transfer of unique products to any museum or selling it at auction in the last decade did not appear.

Having been refused the potential operators, X. Lenar stopped work on his first submachine gun. These events are not the best way affected the whole course of development of prospective weapons. Over the next few years the Argentine engineers did not return to the subject of submachine guns. The new project of this kind appeared only in the mid-thirties. Notably, that this time it was a whole family of three submachine guns, having a high degree of commonality. Two new samples of the three were adopted and made relatively large series.

Juan Lenar the first Argentine gunsmiths took up the construction of sub-machine gun, and the first to present a ready example of such weapons. For some reason his project has not moved beyond the prototype assembly and testing. The army and police were unwilling to buy such weapons, and the project was left without a future. Subsequently interesting example was forgotten for several decades. Nevertheless, and at such a result, SMG Lehnar was able to return from oblivion and accruing take place in history, remains the first model in its class, established in Argentina and throughout South America.