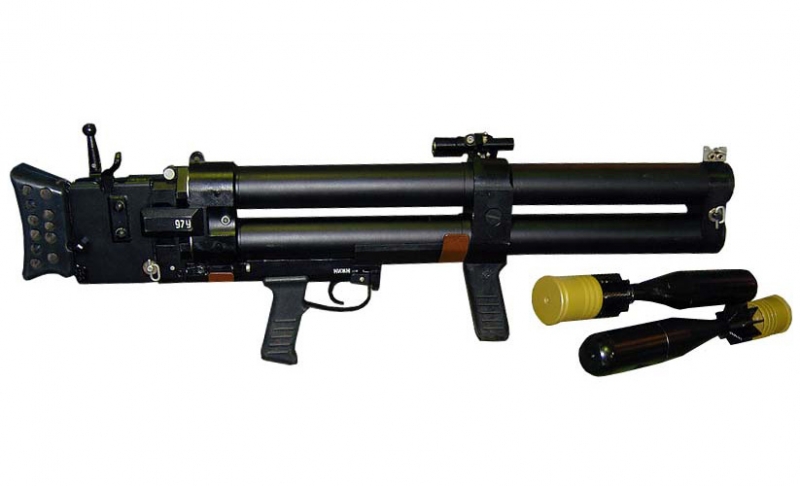 The grenade launcher was developed in the 1980s and 1990 was adopted for the. DP-64 is a double-barreled 45mm grenade launcher with vertical shafts, it can be used with high-explosive grenade PG-45, and the signal - SG-45. The grenade launcher was first shown to potential buyers at the fair in 1993 year. Shooting from the DP-64 "Nepryadva" produced with each barrel turns. To recharge his grenade launcher breech tilts down, and trunks laid grenade with pre-exposed depth of the fuse tripping 0 to 40 m. In the case of blasting under water explosive ammunition PG-45 acoustic wave affected all life within a radius of 14 m. Before firing the fuse, located in the bow FG-45, It is set to the correct operation of the depth, whereupon undermining Fragmentation often occurs at a predetermined depth. 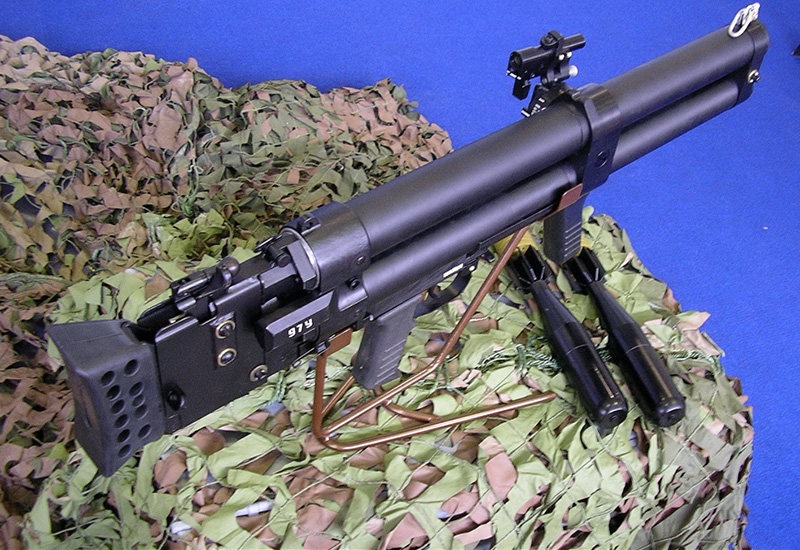 At the same time munition SG-45 is designed to highlight and mark the location, in which the enemy swimmers were found. The SG-45 uses a contact type mechanical fuse. Upon impact of the grenade light water lifting charge is triggered, which pushes from the SH-45 pyrotechnic torch. Torch floats to the surface and burns sufficiently bright red, lighting all around. The action is a signal grenade 50 seconds.
Grenade launcher equipped with a mechanical fuse, when the trigger guard locks. Check box fuse is located directly in front of the trigger guard. Grenade DP-64 equipped with a view sectioned dividing step 50 m. Mounted on the grenade sight allows the shooter to fire both from the closed position of the hinged trajectory, and direct fire. Weight grenade "Nepryadva" does not exceed 10 kg. 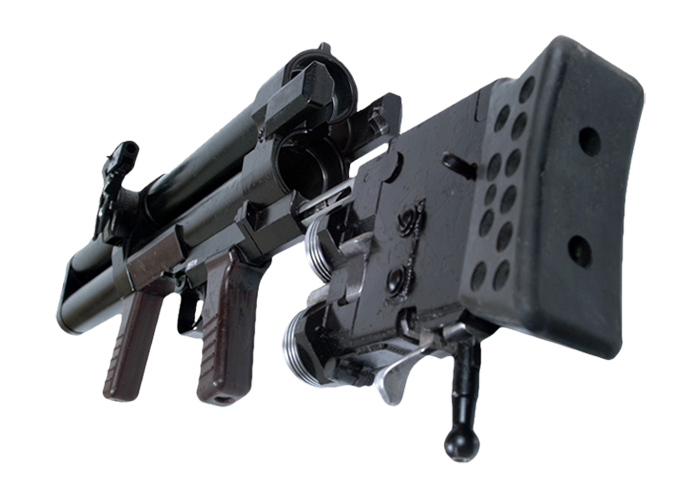 DP-64 grenade launcher "Nepryadva" works on the principle of the dynamo-reactive grenade. The main part of the grenade launcher consists of 2 smooth walled barrel, having a length 600 mm and fixed in the breech, where they are held together in the middle by a sighting of the clutch collar and muzzle. Trunks grenade locked by means of the shutter surround rubber butt pad abutment shoulder. In the lower part of trunk unit located the front handle, which serves to hold the grenade when fired, and the rear handle with a trigger. In the upper part of shutter levers are cocking and locking. Sight-quadrant placed on top of sighting with the left side clutch.
DP-64 grenade launcher ever series production did not start, but occasionally it is produced in small batches to arms ship marine units, Crews ship-cutter operations staff, Some parts of the FSO, ship-cutter operations staff Sea Guard Border Guard Service and PDSS detachments (counter-sabotage forces and means). Also, this weapon was offered for export, but selling it abroad, there is no information. 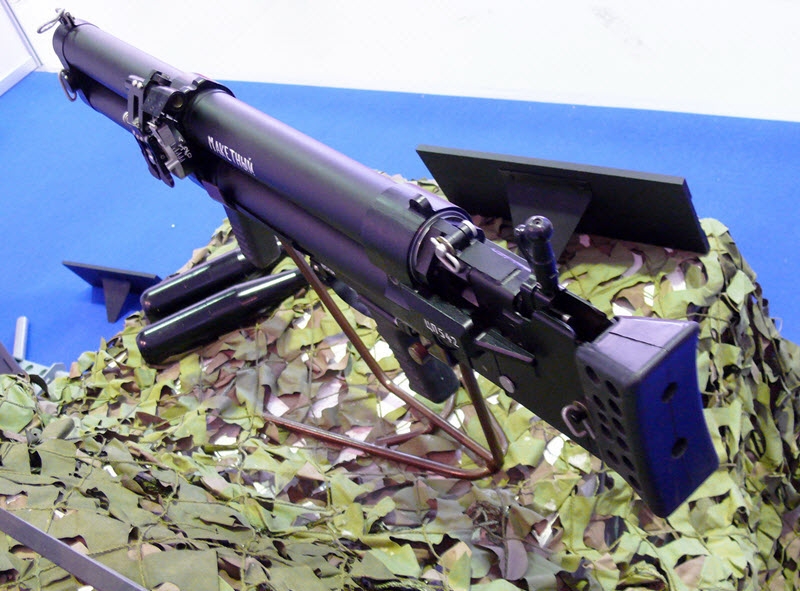 History of the creation of the grenade goes back to 1981 year, when TsKIB COO received the appropriate reference for research projects. According to the project "Nepryadva" had to develop 2 grenade: 45-mm double-barreled active launcher and a 50-mm-reactive active, from which subsequently I had to stay only one. To spring 1983 year model samples grenade both gauges were created: 45-mm for shooting at a distance of up to 400 meters and 50 mm for shooting at a distance of up to 1500 m. By June 1983 , they, along with ballistic units were sent for testing in Sevastopol.
In the course of these tests, it was decided to stop work on the 50-mm grenade. Also, the design of prototypes sailors asked to eliminate the carrying handle, who also served as the role of sight when shooting straight shot. Other wishes and comments of the sailors was not. Thereafter, a pause length in 2 of the year. TsKIB COO given the task on development work on the project "Nepryadva" at the beginning 1985 of the year. 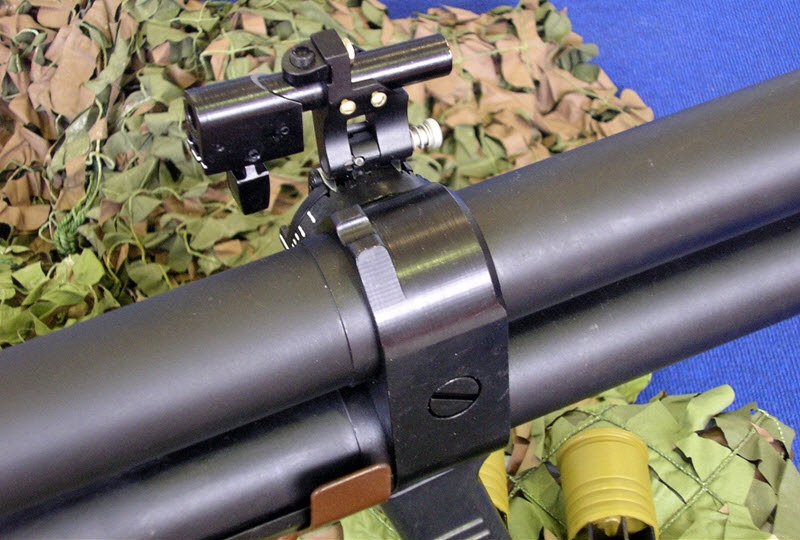 By the time the development was approved by a double-barreled 45-mm grenade launcher gated. operational and design documentation for prototypes and series of devices has been created. For example, on the rubber-coated brackets, which served to consolidate an easily propelled grenades on bulkheads battle stations, as well as other places, in which the watchman or the other member of the team, found in the water goal, You can instantly detach the grenade launcher and use it for its intended purpose.
The vertical arrangement of barrel grenade launcher allowed to make "Nepryavdu" fairly flat and very comfortable to wear behind, eg, when forced marches, that soldiers and sailors had to make during the patrol reservoirs and the coast on foot. Use of ATM belt when attaching it to swivel at the muzzle and the rubber body axially buttplate, passing through the center of gravity, It proved to be quite a good solution, although it required several revisions. Later, one of the grenade was sent to Leningrad to the landfill (Rzhevka), where tests were conducted and it was concluded by the recoil energy when firing and sound level. 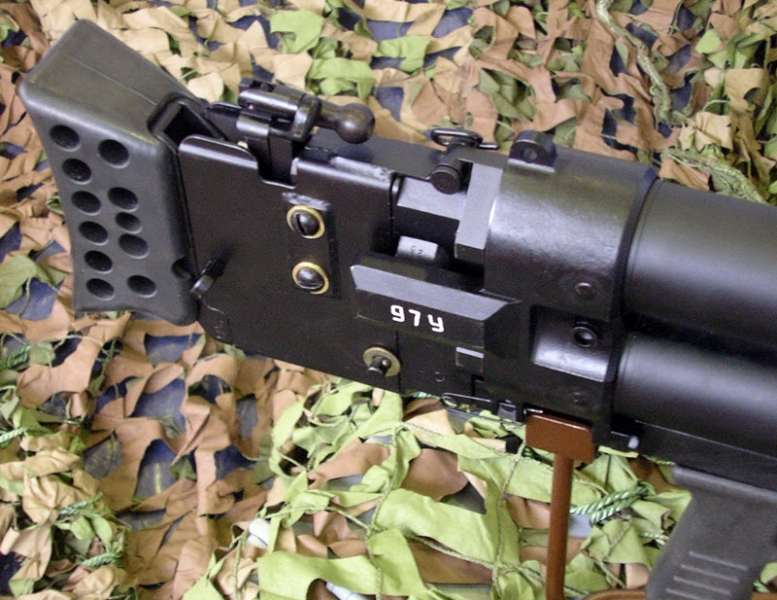 Sound when fired grenade did not require ear protection arrow, and the energy of the impact was 45 J., which was below the acceptable technical specification values ​​- 59 J.. Despite, that the actual energy of the impact was higher than permitted by regulations energometricheskim (35 J.), firing a grenade launcher quite easy to carry thanks to the sales scheme shots and the presence of shoulder rest with a perforated rubber butt pad. Night test with access to the sea have demonstrated, that "Nepryadva" at the DP-64 weak, Antidazzle nedemaskiruyuschee and muzzle blast.
Interesting enough to get the first live firing a grenade launcher, which indirectly proves the high efficiency of its underwater damaging effect. At the beginning of a series of shots, the first of them from the board of the ship substantially vertically in the water was accompanied by a crash forces, if the side of the sea diving ship crashed laden KamAZ. After a shot on the deck immediately ran midshipman, who began to shout: "What are you doing! You will tear me all the pipes!». After this, the testers went to the ship's stern and shot him "under the tail". Again underwater explosion was followed by a terrible crash and the appearance on the deck of another midshipman, who shouted: "What are you doing! I will knock you glands!». Taking all this into account, frogmen profession in these moments did not look anything attractive. 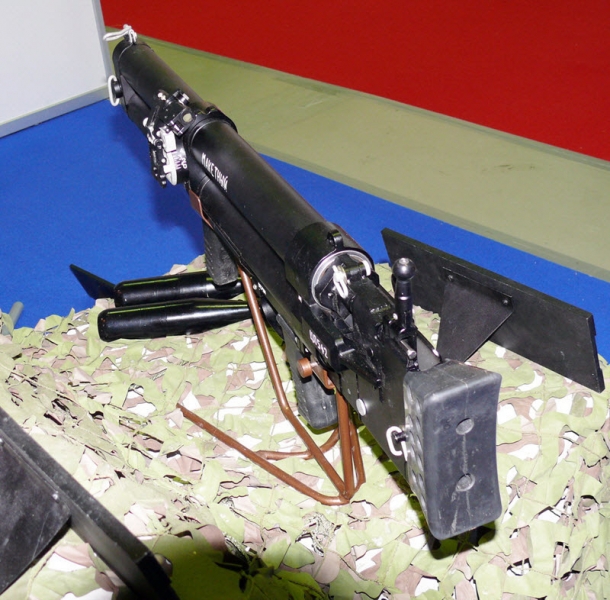 State tests grenade was launched in October 1988 in Sevastopol. The tests were accompanied by quite bad weather and were really fighting. After several days of fruitless waiting sea diving ship was forced to leave for scheduled maintenance, and the testers had to go to sea on a small flat bottom boat towing. 12 October, when we began testing complex in the sea, heaving, According to experienced sailors, It was already 5 points, while "Nepryavda" could be used in rough sea to 4 points. But had nowhere to retreat, and the state commission gave its approval at the beginning of the test.
This time the fire from a grenade launcher were not different members of the commission, and five selected sailors - all have secondary technical education. During the briefing they all grasped on the fly, and only the beginning, putting on a neck strap with a weighty grenade launcher (nevertheless 10 kg), politely, but enough grunted expressively. In this case, the sailors, shoot a sufficient number of grenades in a strong rough seas with a swinging deck, noted, not tired. 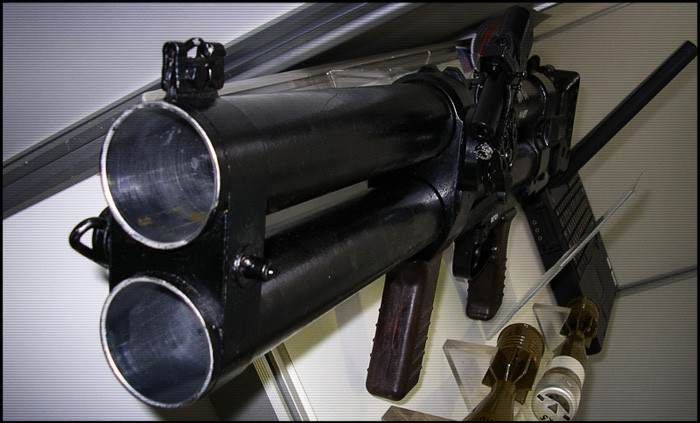 Tactics combat use grenade PD-64 assumed in the case of attack by sea loading one of trunks signal grenade SG-45, which was used to refer to the target place on the water surface, on which, as is known, no landmarks. Signal pomegranate shoots after receipt of the targeting range and course objectives. Grenade floated on the surface of a burning torch red, in which the shooting was carried out with high-explosive ammunition PG-45, periodically the target signal grenades were issued again. Torches of SG-45 well lit even in storm conditions. According to the results of these tests grenade "Nepryadva" Order of 4 Martha 1990 It was adopted by the Navy. 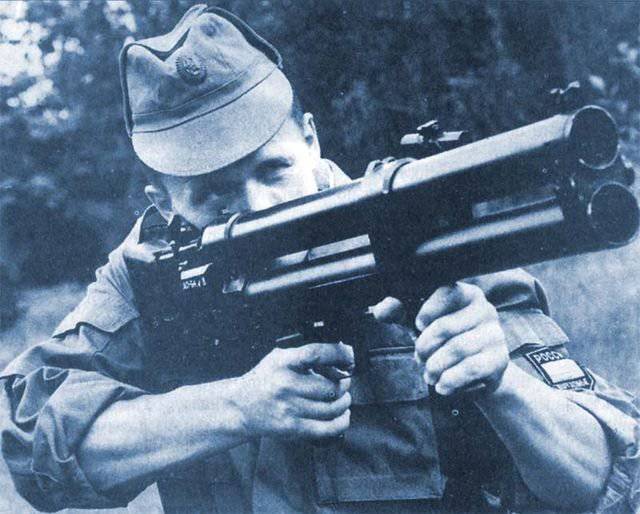 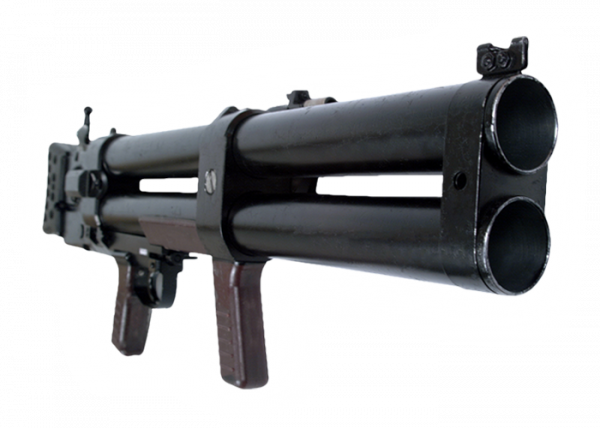 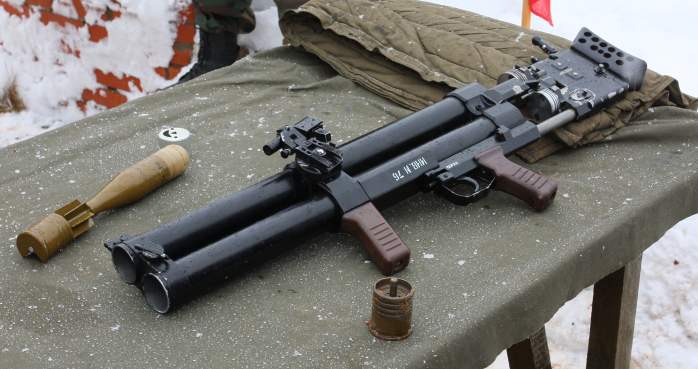