Euro Shackleton (Avro Shackleton) - British Royal Air Force four-engine piston patrol anti-submarine aircraft of the Royal Air Force. The aircraft was designed by the British company Avro on the basis of the heavy four-engine bomber of World War II Avro Lincoln. This heavy pedigree piston machine, dating back to the mid 1940s, for many years was the heavenly satellite of Soviet submarines. Avro Shackleton was mass-produced with 1951 by 1958 year, during this time in the UK was collected 185 aircraft of various modifications. Pretty impressive figure, given the narrow specialization of the aircraft.

The patrol plane was named after Ernest Henry Shackleton, an Anglo-Irish explorer of Antarctica.. man, which belonged to the heroic age of Antarctic research. Ernest Shackleton was a member of four Antarctic expeditions, three of which he directly commanded. It is worth noting, that the plane fully justified the name given to him, without tarnishing the memory of an outstanding researcher. Aircraft Shackleton in various modifications remained in service with the British Royal Air Force for 40 years - to 1991 of the year, very decent result for aircraft.

The era of piston aviation, which is rapidly leaving after the end of World War II, nevertheless left several small loopholes for such aircraft, one of which was coastal long-range patrol aircraft. In those years, the first jet engines were not very reliable and were quite voracious, while no one demanded high flight speeds from patrol cars, not to mention record. When the British needed a replacement for the fleet of former American patrol bomber Liberator flew off to the war (PB4Y-1 and PB4Y-2 versions), they decided to make their plane, which would not differ fundamentally from its predecessor. 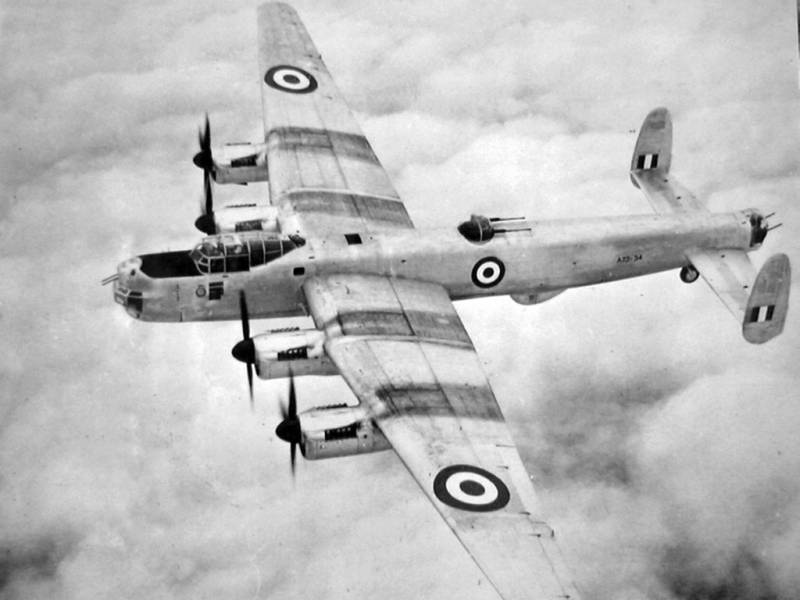 Avro Lincoln
Built by Avro engineers, who managed to get their hands on and hone their skills in designing four-engine aircraft on the numerous Lancaster and Lincoln bombers, the new patrol plane just couldn't go wrong. The patrol plane they created first flew into the sky in 1949 year and then throughout 40 years engaged in the search for probable enemy submarines, mainly soviet, as part of the British and South African Air Force.

Since the aircraft were actively operated up to 1991 of the year, survived to this day 10 Avro Shackleton various modifications. However, most of them have not ascended into the sky for a long time. Closest to flying is a plane with tail number WR963, video with which you can find today on Youtube video hosting. A group of enthusiasts is engaged in the restoration of this aircraft.. In the video at the airport in the British city of Coventry, the plane makes jogs on the runway, There is a chance, that someday he will again be able to ascend to heaven.

Euro 696 Shackleton - a multi-purpose anti-submarine aircraft, which was developed on the basis of the Avro World War II heavy bomber 694 Lincoln. New aircraft retained wing and landing gear from Lincoln, but got a brand new fuselage, which has become wider, taller and shorter. At the same time, the horizontal plumage of the aircraft from a low-lying turned into a high-lying, and the typical Lancaster and Lincoln bomber tail washers of vertical plumage gained weight, becoming much more massive, as well as curving. Instead of Rolls-Royce Merlin engines, new Rolls-Royce Griffon engines with three-blade coaxial propellers were installed on a multi-purpose anti-submarine aircraft. The new fuselage made it easy to place on board a crew of 10 human. Two 20 mm guns were installed in the dorsal turret, and in the rear there were two 12.7 mm machine guns. Inside the large bomb bay, the aircraft could carry as deep, conventional bombs. 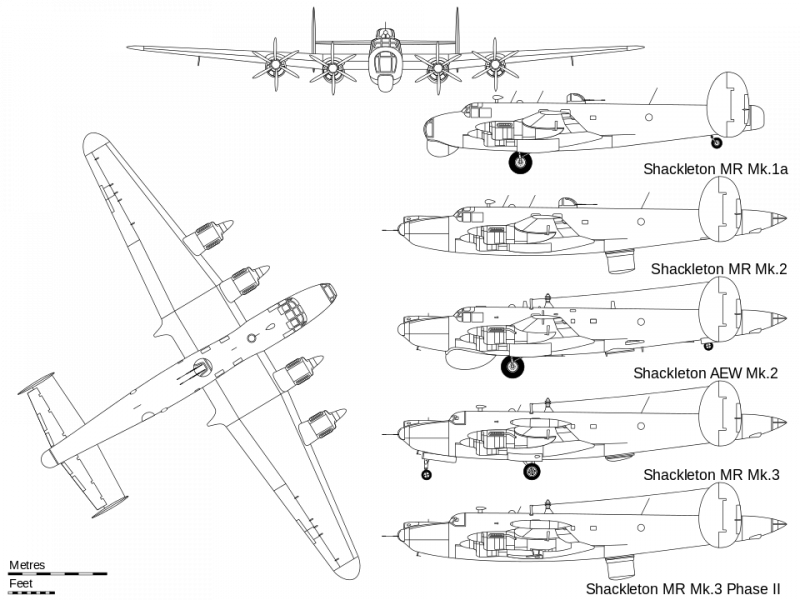 The new car made its first flight 9 Martha 1949 of the year. The first production Avro Shackleton took to the sky - 24 October 1950 of the year, and in February of next year, production aircraft began to enter service. The first large serial version of the patrol aircraft was equipped with four Rolls-Royce Griffon 57A engines and was designated Shackleton MR.Mk.1A.

Almost immediately after the start of deliveries to the troops of the Shackleton MR.1 aircraft, British designers began to create a modernized version, taking into account those shortcomings and shortcomings, which were identified during the operation of version MR.1. The new version of the aircraft received the designation Shackleton MR.Mk.2. Especially for her, Avro designers designed a completely new streamlined nose, in which there was a twin 20 mm artillery mount, located above the scorer site. Instead of Radar Fairing, which was located in the lower front, the plane received a half retractable fairing in the ventral cannon turret, this made it possible to provide an overview in 360 degrees. The rear heavy machine guns and the transparent tail fairing were also dismantled., and the non-retractable one-wheeled tail support was replaced by a two-wheeled retractable support.

The latest production version of the Shackleton MR.Mk.3 was created with the aim of improving all the general characteristics of the machine - the ailerons were improved, end wing fuel tanks installed, wing configuration changed. The designers did not deprive the aircraft crew of their attention - the MR.Mk.3 version received a cabin with excellent visibility and a soundproof cabin for the second crew - in case of long patrols in the air. The increase in the total weight of the aircraft led to the appearance of a three-leg retractable landing gear with a nose strut and double wheels. Another notable aircraft change was the lack of an dorsal turret, and the appearance of suspension units under the wings allowed the use of rockets. Eight out 42 Shackleton MR.Mk.3 serial aircraft built were delivered to South African Air Force. 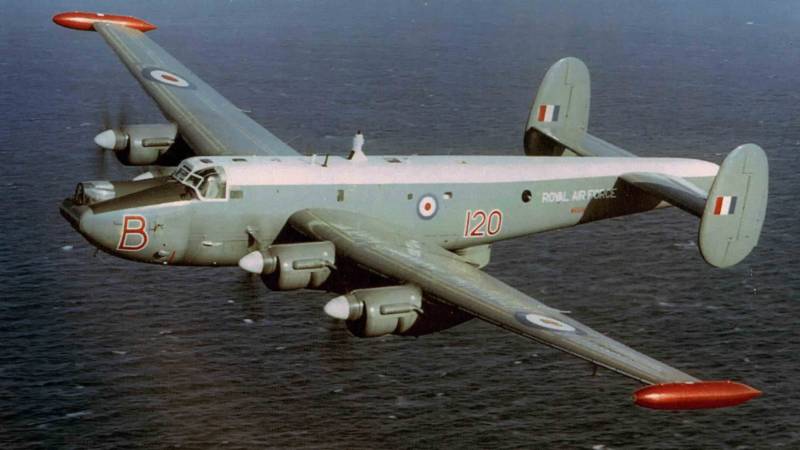 Shackleton MR.Mk.3
In the mid-1960s, after the completion of production, the aircraft was once again improved.. The increased structural strength of the patrol car allowed to increase the fuel supply. Also on the plane appeared two small turbojet engines Rolls-Royce Viper 203 thrust 1134 kg each. They were installed in the outer wing nacelles., providing extra thrust to the car during takeoff and climb, if the plane took off with maximum load.

In the process of operating the Avro Shackleton aircraft, the British faced one rather unexpected problem - lack of fuel. In the age of jet aircraft, high-octane gasoline for piston aircraft engines of the successor of "Lancaster" was in short supply. Particularly acute problem with high-quality fuel arose, when airplanes were based in overseas territories - in Akrotiri in Cyprus, Catania, as well as the Icelandic base Keflavik and Italian bases.

The latest version of the veteran aircraft was the Shackleton AEW.2. This aircraft was developed in 1971 by British Aerospace (BAe), it was created as an alternative to the anti-submarine aircraft and the Gannet AEW.3 AWACS company Fairey / Westland. There were built 12 AEW.2 aircraft. Their main difference was, that the semi-retractable dorsal fairing of the radar antenna was replaced by a fixed convex fairing, located in front of the bomb bay, it is located search radar ARS-20, which was used on Gannet AEW.3 aircraft. Other external changes were related to, that more different antennas were installed on the plane. 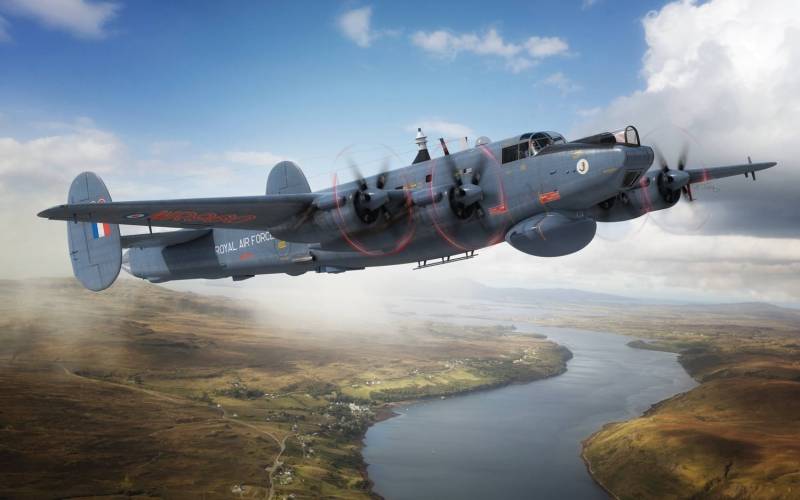 Shackleton AEW.2
All 12 aircraft were in service with the 8th squadron of the British Air Force, searching for submarines, performing the function of early detection of enemy boats. They were based on the basis of the Royal Air Force "Lozigaons", flying over the North Sea, Arctic Ocean and West Atlantic. Some patrol flights took time to 14 hours. Aircraft remained in service until 1991 of the year, when they began to be replaced by early detection aircraft Boeing E-3D Sentry AEW.Mk 1.