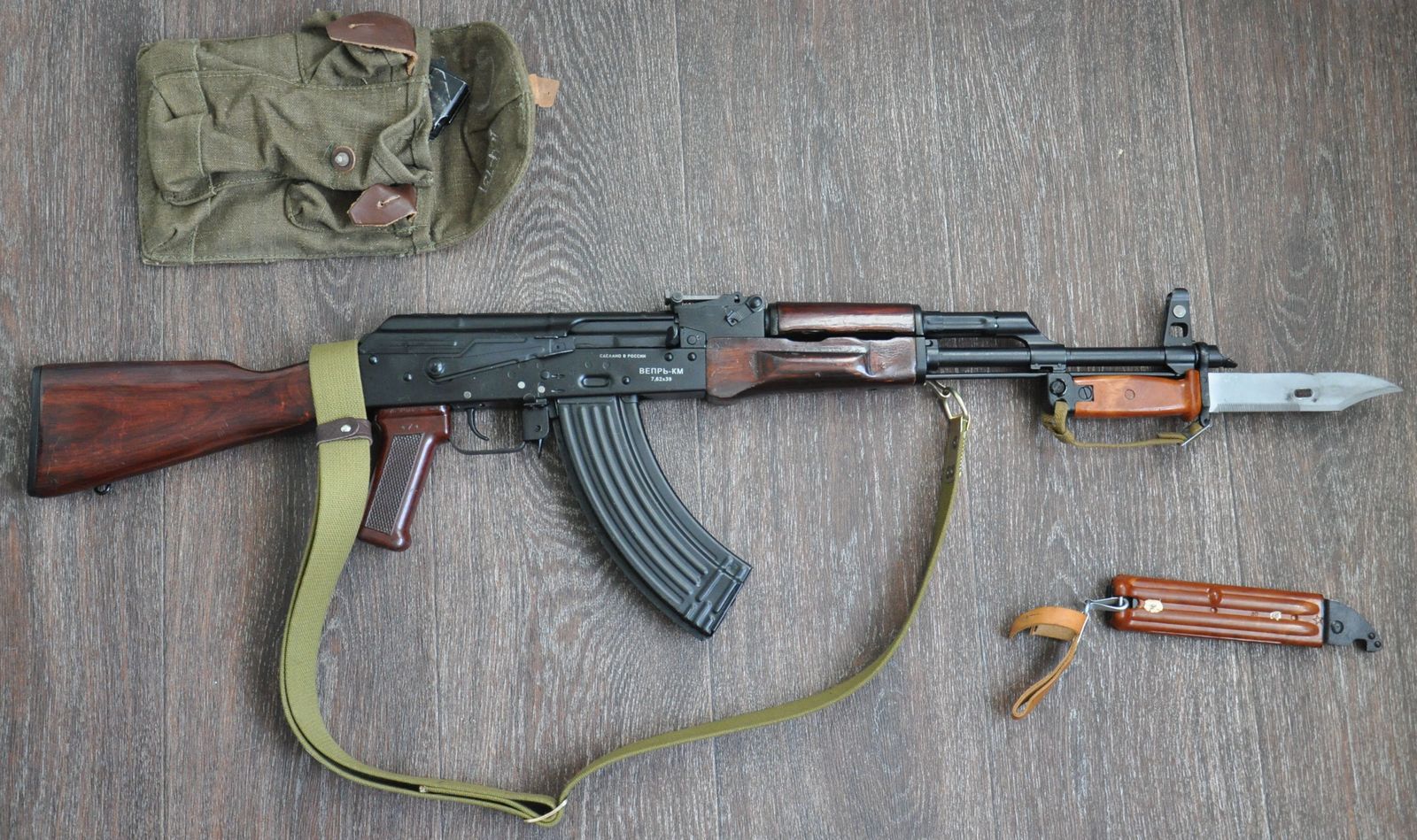 TO 1959 AK year operating experience has been modified, and 1959 year on weapons was adopted AKM rifle (AKM). The main upgrade was primarily tselnoshtampovannyh receiver, lower weight, raised up butt and modified trigger mechanism, whose structure was introduced retarder trigger actuation (sometimes mistakenly called retarder rate of fire). Along with AKM has been adopted and a new bayonet, which had a hole in the blade, it can be used together with a sheath as wire cutters to cut the wire. Another improvement, appeared in ACM, It was the introduction of the muzzle compensator, is screwed onto the threads on the muzzle of the barrel. 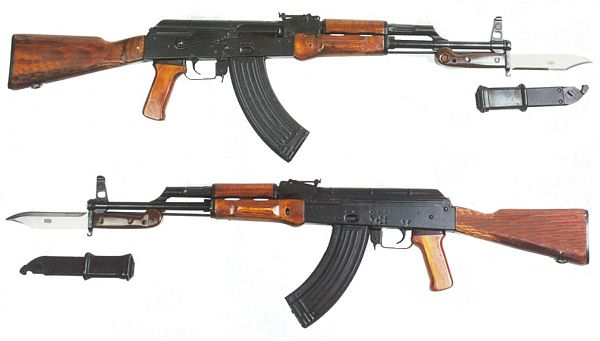 Instead compensator silencer on the barrel PBS-1 can be set, requiring the use of special "CSS" cartridges with subsonic velocity bullets. ACM can be equipped with 40 podstvolʹnym mm Grenade GP-25. Sights AKM got to markup 1000 meters instead 800 meters as the AK-47.

Basis automatic gas engine with a long stroke gas piston. Leading automation element is a massive bolt carrier, which is rigidly attached to a rod of the gas piston. The gas chamber is located above the barrel, the gas piston moves inside a removable gas tube mounted thereon handguard. The bolt frame moves inside the receiver on the two side rails, wherein the design provided significant gaps between the moving parts of automatics and fixed elements of the receiver, which ensures reliable operation even under strong domestic weapon contamination. Another aspect, promoting reliable automation in tough conditions, known excess in normal conditions of a gas engine power. This eliminates the gas regulator, and thereby simplify the construction of the weapon and its operation. At the cost of this solution is the increased impact and vibration when firing weapons, which reduces the precision and accuracy of fire. The barrel is locked by turning the bolt on two massive lugs, engaging with the shutter elements of the receiver provided by reacting korobki.Vraschenie protrusion on its body with a shaped recess on the inner surface of the bolt. The recoil spring guide rod and with its base, formed as a single assembly. The base of the rod of the return spring also serves as the latch receiver cover. Cocking handle is made one with the slide frame, located on the right weapons and moves while firing. 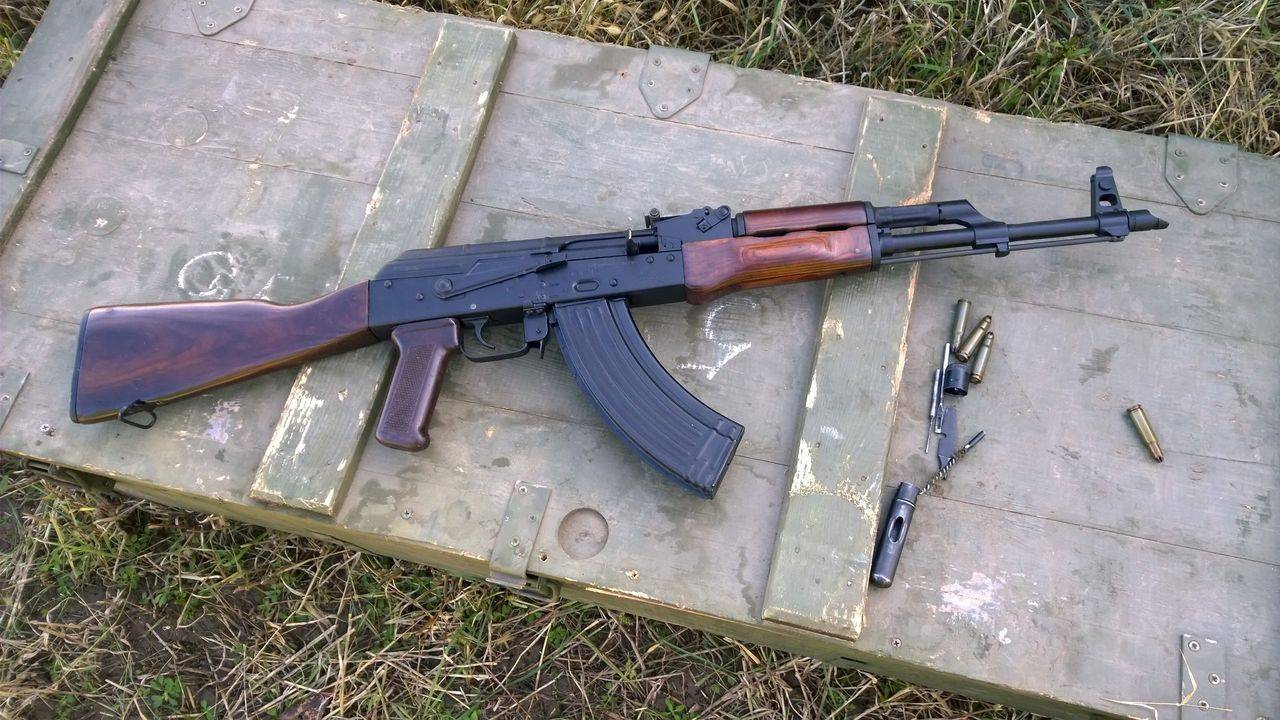 Receiver ATM stamped from steel sheet, Riveted milled insert in the front part thereof. Early AK receiver was combined of forged and milled elements, in series AK-47 tselnofrezerovannoy. At first glance, milled and stamped receiver can be easily distinguished from each other in the form of recesses over the receiver to store. On the AK-47 with the milled box is long enough milled recess of rectangular shape, and on the AKM is a small oval vyshtampovki.

Shock trigger mechanism, It ensures the maintenance of single and automatic fire. The choice of modes of fire, and the inclusion of the fuse carried long pressed the lever on the right side of the receiver. In the upper position the fuse closes the slot in the receiver, protecting the mechanism from dirt and dust, blocks the movement of the bolt ago, and locks the trigger. In the middle position locks the sear single lamp, providing automatic fire. In the lower position the sear single lamp is released, providing fire single shots. The shock trigger Akmal, in contrast to the AK-47, retarder introduced trigger response, which during automatic fire trigger delay timer descent after triggering a few milliseconds. This makes it possible to stabilize the slide frame in its most forward position after her arrival ahead and a possible rebound. On rate of fire, this delay has almost no effect, but it improves the stability of weapons.

Muzzle of the table has a thread, usually closed protective sleeve. In this device the thread can be set to a silencer BSS or BSS-1, in common parlance - muffler. Together with the BTS uses special cartridges "CSS" reduced to subsonic muzzle velocity heavier bullet. for ACM, Besides, muzzle compensator was introduced in the form of a spoon-shaped projection on the muzzle bushing. This compensator is intended to reduce the upward withdrawal of the barrel due to the, escaping from the table that the powder gases under pressure compensator on ledge, creating a force, counteracting cornering power stem upward due to the vertical arm recoil. It should be noted, that such compensator exclusively plays the opposite role in the conduct aimed fire single shots, slightly deteriorating patterning and increasing dissipation bullets due to uneven exposure to gases on the bullet when it exits the barrel. But, because of the technical project for the AKM is the main mode of automatic fire, This property of the compensator can be neglected, and if necessary - simply remove it from the trunk.

Nutrition rifles carried out from the box magazine dual inline cartridges. The nominal capacity of the stores - 30 rounds. Early shops were made of steel stamped, with flat walls. Later, there were forged from steel shops with vertical curved podshtampovki on the sides for increased rigidity. Then the troops were plastic shopping characteristic dirty orange. If necessary, in the ATM can be applied to 40-cartridge horns and 75-cartridge drum shops of machine gun RPK. 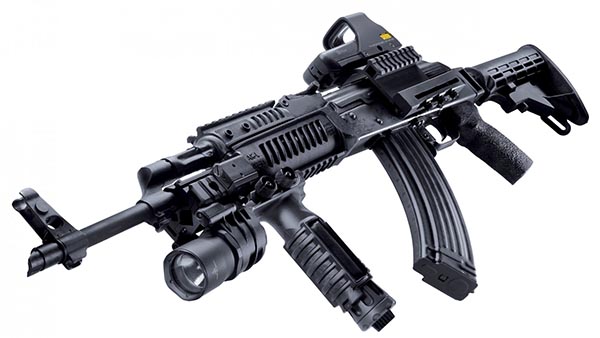 In the early machines forearm, pistol grip and butt wood, butt has a steel back plate with a spring loaded lid, cover up the storage compartment for the cleaning and care of arms. On the crest of the stock AKM raised up to reduce the toss weapons firing. On a part of automatic pistol grip made of plywood or plastic. AKM equipped with bayonet-knife in its sheath, and gun belt. Specially designed for airborne troops modification AKMS folding machines have butts, made of stamped steel profile. These butts folded down and forward, under the receiver box, belonging to such machines worn separately. 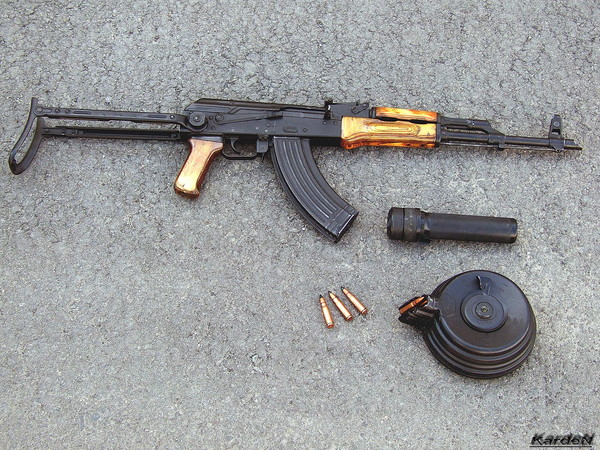