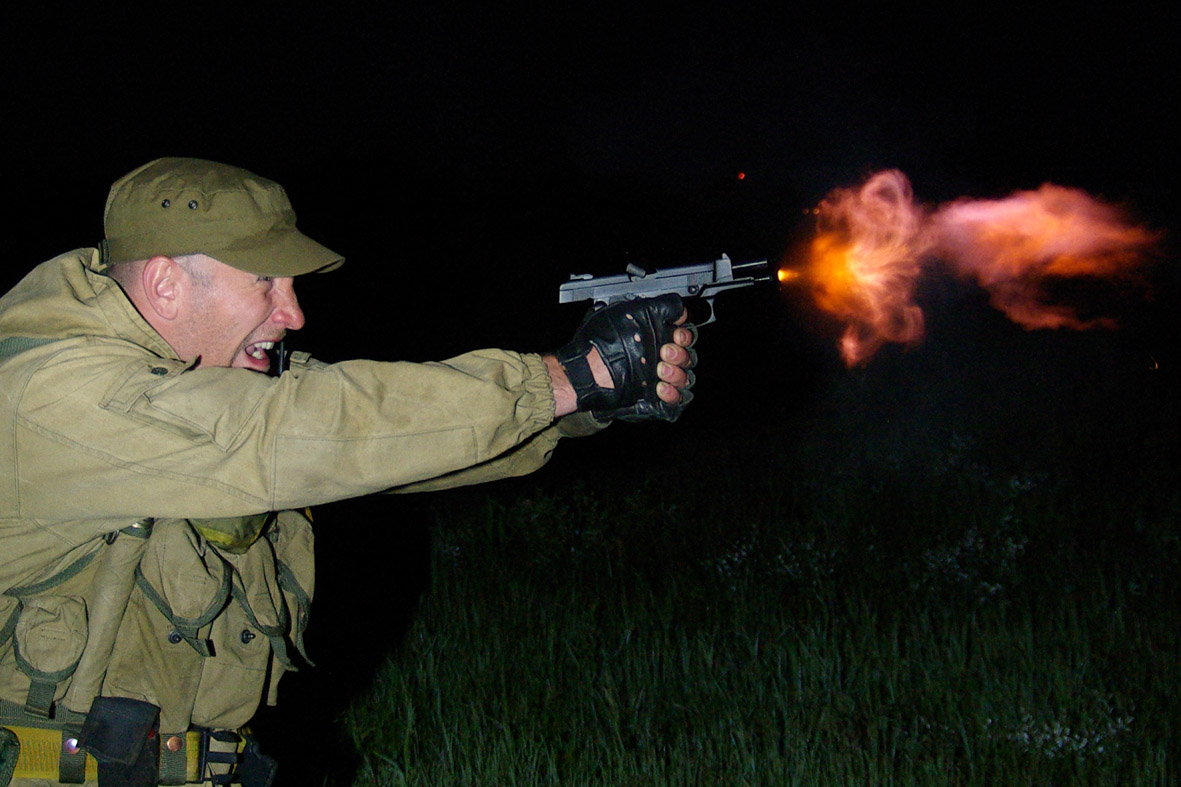 "When confronted with the enemy get out of the line of fire and stay alive".

This is the first, you need to make an arrow in a combat situation. first, to survive, and then all the rest. This means, it is necessary either to reduce the projection of his body, a break with a distance opponent, a shift towards, or go into hiding.
Ideal - to leave immediately for shelter, sort out the situation and hit the enemy. However, life is not always perfect, so it is important initially to teach myself to two things:: leave the line of fire, and at the same time bring a weapon to combat readiness.

But if you still lucky enough to get away for shelter, remember, that the shelter must stop a bullet, allow to orient in the situation in the first seconds of the fight and did not become a trap for you, where it will be impossible to get.

so, first, you need to do - is to escape the line of fire and bring weapons to combat readiness. In this regard, a very common mistake among shooters, in our opinion, is pulling out weapons from the holster. Elbow thus goes too high up, which requires extra time to pay off the inertia of motion and the subsequent elimination of weapons firing line.

Much easier and faster not to pull the weapon from the holster, and fix the pistol grip in the hand and lower the body's center of mass. Hand without jerks upwards, and immediately displays the weapon on firing line. Not to look for weapons during the extraction, hand slides on the thigh, as if stuck to the handle of the gun.

The next step, dosylaya associated with the cartridge in the chamber, Some shooters performed almost at arm's length, practically on the line of sight. It also severely reduces the rate of production of the first shot.

Dosylaya cartridge into the cartridge chamber is performed immediately after removal of weapons from holsters, simultaneously with the removal of his shot on the line. Arm, holding a gun, She pushes him to the shot line, and the second hand only fixes the bolt carrier and then it lets go.

Very important, to arm, which eliminates the weapon on firing line, I stopped at the point of sight, instead swept above it followed ottsentrovkoy boresight. This lack of sinning usually starts with an arrow (and then the motor skill "eats" and remains), which also takes time and covers visibility objectives.

In one second, the average time to the arrows to make one shot and two are aimed shot (one of which is not aimed, second - partially sighting). We prepared an arrow 1.8-2 seconds. goes to offset, extraction, dosylaya, two shots on goal and change the firing position.

Consequently, more than one second at one location can not stay. It is that time is given to the arrow, to hit the enemy and not to be affected the most. Therefore, the second rule of fight fire sounds: "For one second Things to hit the enemy".

Have a professional shooters have an indisputable right to melee: "Care - two shots - care". Really, if the same amount of time is spent on the production of a single sighting and two non-aimed shots, in the battle to make better, albeit partially sighting, but two shots on goal. At first, It increases the probability of hitting, Secondly, increases the effectiveness of defeat. In medical practice there were cases, when a person remains alive with six bullets in the body. But still more than two shots are not recommended from one position. As mentioned, main enemy in battle - this time.

Even if you're on 100 percent sure, that hit the target, all should be equal to the change position and look for the following threat (the enemy can be more than one). That is, the tactical fire fight diagram would look like this: recognition of the threat, offset from the active zone lesions, opening fire on the enemy, change of station, control the situation.

The area of ​​the zone of active lesions in close combat, considering dispersion bullets, It is spread by 10 cm to one meter. Consequently, move the line of fire should be at a distance of not less than one meter.

Opening fire on the enemy, it is not necessary to aim at his head. To get into the head of a moving target - a very difficult task. Priority Goal - vital organs location area, an area from head to groin vertically and from the middle of the left breast pocket to the middle of the right horizontal. It is in this area should aim.

In our opinion, the most effective point of impact - or the solar plexus, or the middle of the chest. When shooting at close range almost no need for aiming.

Now let's talk about the shooting of PM methods series of two shots. Among shooters very common method of "flash" (second bullet is higher than the first 10-15 cm). Need to say, that it is justified when firing from the PM, at a distance of no more than 10 m. Over 10 m the probability of hitting the target of the second bullet, taking into account
the inevitable dispersion of bullets, significantly reduced.

But this in-dash. In the same battle 50 percent hit - already a good result. Therefore, the "Flash" method is recommended for use at a distance of no more than 5-6 meters. It should be emphasized, that the application of the "flash" method for self-cocking pistols, which include PM, justified only in cases of state weapons - a cartridge in the chamber, the hammer cocked.

The weapons state - a cartridge in the chamber, half-cocked trigger - when using this method will trigger stall and leaves the second bullet hit the target. Impact difference between the first and second pressure trigger.

Another reason, why should not shall be sent round in the chamber in advance when carrying a weapon half-cocked, It is, that during training laid automated motor skill. And if you regularly work out their effects on displacement, extraction, dosylaya and shot, then the battle will happen the same.

Mishandled cartridge in the chamber will take off and knock you tunnel vision, necessary for vytselivaniya enemy. Therefore it is better to carry arms in the same position, that in training. Otherwise, in a real situation of a sudden clash, you just do not have time to remember, where you are now laid down their arms and in which it is able to.

so, we understood, As for 6 meter works quite effectively the method of "flash". Over 6 meters is recommended to use the method of "hammer". Here also, as in "Flash", first sighting shot, and the second - is not aimed, sent after. The only difference is, the second shot is made not at the time of impact, as in "Flash", as soon as the recovery of weapons in the line of sight after return. To 15 m, With good skill and aimed fire properly grip weapons, second bullet lies next to the first one in the horizontal plane.

The method of "reverse hammer" is effective in sudden collision with an armed enemy. In this situation, time to aim in the first seconds of the battle is not, so the aim is corrected by firing a course. The first shot - no shot (almost from the hip) immediately after removal from the line of fire, and it shall be sent to the cartridge chamber. Usually, it goes below the target, knocking out pieces of land under the feet of the enemy, thus forcing him to shift. The second shot is aimed.

At close range in a collision with several opponents at the same time it is recommended to fire one shot for each opponent. As in the previous case,, we do not have time to produce two shots at each target.

At a distance of up to 5 meters to efficiently produce a series of not aimed shots at targets spaced from the hip. Over 5 and to 15 meters should be carried out in part aimed fire. Over 15 meters - the only sighting. It is necessary to emphasize, that all methods are not aimed fire can only be used under well reinforce the skills aimed fire.

of course, if the battle began, and the enemy is on the background of civilians, the fire should be carried out only sighting. In this case, the scheme is as tactical: care - one aimed shot - care. As we remember, more than one second at one location can not stay

It is necessary to clarify, that under aimed shot we understand Shot, produced when combining flies with the middle of the projection objective, passing through the center of the rear sight on a shear line, without delay and additional correction of sight. And for this it is recommended to choose the free stroke of the trigger before such a combination. Otherwise, the shot will be tightened over time.

During the fire fight is necessary to constantly monitor the course of events. Therefore, the aiming is done with two eyes, not one, as some arrows. "One-eyed" more vulnerable fighter.

For the same reasons, all manipulations with arms, including combat reloading during the fight and in the store dozaryazhanie arisen pause, made blind, to the touch. Look also aims to search for the enemy and assess the situation.

When firing is recommended to be considered spent cartridges. Store Reloading is done after the seventh shot. eighth cartridge, remaining in the chamber, It will provide an opportunity both to increase the ammunition, and, if necessary, to make a shot at the enemy during a change of store. This trick is known to many arrows. But, as practice shows rapid-fire, this arrow is often overlooked, remembering only, when the gun will be on the slide stop.

Another thing to consider when reloading the store during the battle is a constant offset from the line of fire. This is also very frequently overlooked.

so, summarize. Recommended rhythm battle: "Withdrawal - two partly aimed shot - care" or "care - one aimed shot - care". Withdrawal from the headmistress of enemy fire, as no clear shot at him, knocks him tunnel vision, why he will be forced to look for you. And when he finds, you will already conduct aimed fire on it, and he would have to move again (if you have time).

During the change of firing position, especially when making somersaults and rifts, arm, holding a weapon, directed towards the goal of (finger outside the trigger). No matter how you tumbled, weapons should always be directed towards the target. The rotation of the arm at the same time takes place in the shoulder joint, and with respect to which all are made somersaults and rolls.

In conclusion, I would like to add, that in a combat situation you need to quickly make a decision. If you took it, then proceed without delay. If you have not yet taken - go for the nearest shelter, quickly assess the situation, choose the best way of solving the problem and act.