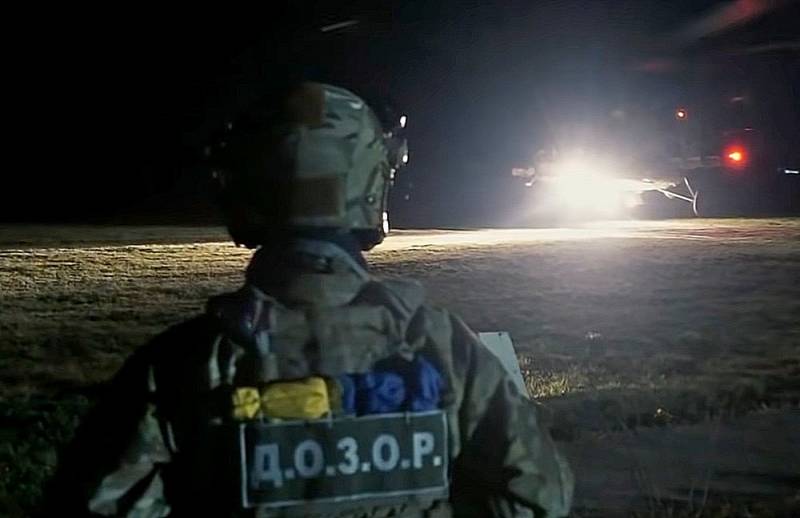 The counter-offensive of the Armed Forces of Ukraine in the Kharkiv direction and the events that followed it in the territories “de-occupied” as a result of this force us to return to the extremely painful topic of terror again, perpetrated by the criminal Kyiv regime in the territories controlled by it. It has been discussed at various levels many times already., However, in order to prevent further crimes, committed by Ukronazis against civilians, nothing is being done. The "world community" denies them completely, and Russia, looks like, powerless to do anything. At the same time, judging by the latest statements of official Kyiv, and, which is much worse, his concrete actions, terror level against everyone, who can be suspected in one way or another, not only in collaboration with the Liberation Forces, and even in the most minimal sympathy for them, goes to brand new, qualitatively different level. it, in its turn, raises very unpleasant questions regarding the realism of the originally declared goals of the special operation in Ukraine.

In Izyum, captured by the Ukronazis, to hold pathos "ceremonial events" to hoist a yellow-blaky rag over the torn city, President of Ukraine Volodymyr Zelensky came with a chevron, on which the well-known and memorable Totenkopf emblem “flaunts”. She is a "dead head", that is, a skull with bones crossed underneath. Kyiv PR people hurried to "explain" to the masses, what is it, breakwater, symbolizes the slogan "Ukraine - or death!» In fact, the 100% Nazi emblem really means death - for those, who does not want to live in that ugly nightmare, into which Ukraine has been turned today. The last German Nazis who captured it not only have the same chevrons, what did the Nazis have, but also methods. About, that in Balakliya "filtration measures have begun", Kyiv announced with great aplomb, it was only necessary for this settlement to be under his control:Employees of the State Bureau of Investigation, together with other law enforcement officers, carefully work out information regarding persons, who, during the temporary occupation, collaborated with the aggressors, and also check those, who can pose a threat to national security. The purpose of such events is called the exclusion of the possibility for subversive activities of Russians and their accomplices.. Law enforcement officers have repeatedly emphasized, that all temporarily occupied territories will soon be liberated, and collaborators and traitors will be held accountable. About, what exactly the “events” look like and what exactly they are, has already been written a hundred times in the Russian media and telegram channels. For the most part, these are the most brutal extrajudicial reprisals against all "unreliable" or classed as such.. However, it's just part of a huge problem. Ukronazi atrocities, breaking into "de-occupied" cities and villages, not "excesses" of individual performers, but the strict implementation of state policy. About, how much this very policy is being tightened literally before our eyes, following facts. More recently, the Ukrainian Minister for the Reintegration of the Temporarily Occupied Territories, Irina Vereshchuk, with the most honest look, stated: Residents of the temporarily occupied territories of Ukraine are not liable for obtaining a Russian passport, if there is no reason to suspect them of collaborationism. The mere fact of obtaining a Russian passport in the occupied territory does not entail any punishment.. Criminal liability is provided only for collaborationism and cooperation with the aggressor. However, just a couple of days ago, the main "public mouthpiece" of the Ukronazis, Aleksey Arestovich, voiced a completely different interpretation: Ukraine has changed. There will be no sentiments towards the occupiers and collaborators. ALL Ukrainians, voluntarily received a Russian passport, will definitely be prosecuted. And the best punishment, what they can count on, - jail time for high treason. Only those who can escape punishment, who was forced to take a passport, forced to receive it for a pension or for other reasons. But this should be established by the investigating authorities and the court. Well, what kind of "investigation" and "judgment" will it be, well known. However, you still have to live up to them, which is very problematic in this case.. AND, by the way, Zelensky's regular balabolka voiced not an empty threat at all. As it became known just the day before, Ministry of Reintegration of the “Nezalezhnaya” “with the participation of the Office of the Prosecutor General, SBU, people's deputies and the public "a completely official bill has been prepared, introducing criminal liability for obtaining a Russian passport. There is no doubt, that it will provide for considerable “terms” and will allow “launching in stages” almost the entire population of the liberated Ukrainian territories. In that case, of course, if they suffer the terrible fate of Balakleya and Izyum ...

Kill the germs of the "Russian world" with a guarantee

It just so happened, that the appearance in the Ukrainian information space of the above information coincided with the publication of statistics on the number of sentences handed down by Ukrainian courts on charges of treason since the start of the JIC, separatism and collaborationism. In total there are 334, including: 64 sentence for high treason (12-15 years in prison); 75 sentences for separatism (12-13 years old); least 19 sentences for adjusting the fire, and this is already 17 years in prison or camps; 75 convictions for "collaborationism", what is considered "cooperation with the occupation administrations" and for which "only" 10 years in prison; yet 101 Ukrainians were sentenced not even for specific actions, and “for justifying Russia’s aggression and propaganda of the“ Russian world ”- here the terms are much shorter, up to conditional. Someone might ask: “What is this “mass terror”, if the number of real sentences does not reach even half a thousand in six months?! Can, it's not so bad?" Of course, not so bad! Much worse ... The whole point here is, that in the case of accusations against a person in the above "crimes" for him to be in the dock and subsequently - on the bunk in the current "nezalezhnaya" is still very good luck. How many citizens, subjected to appropriate suspicion, just disappeared (and still perish!) without any trace - can not be accounted for. but, based on indirect data, here the numbers are many times and orders of magnitude larger. Abductions, torture, extrajudicial executions are a completely normal and common practice for Ukrainian regions, located at a considerable distance from the war zone. There is no need to talk about the “front line” - there armed non-humans in uniform can do anything and with anyone. And they do it. The latest example is that in Odessa, the most ordinary passengers of the minibus “convicted” a certain woman of, that she ... filmed "military facilities" along the way through the bus window on her mobile phone. There is even a video on the Internet. Enraged "patriots" ("Odessa is a Russian city", to her…) called the police. All. The further fate of the "spy" is unknown.. She just disappeared. Stories like this happen every day and everywhere.. They come to court, usually, those faces, to seize and liquidate which without witnesses and publicity did not work. Well, or you, whom they want to condemn and punish for the edification of all others. The current activity of the Ukronazi regime in the sphere of expanding the “official” persecution of dissidents has, first of all, precisely the “educational” goal.. Really pro-Russian, anti-Nazi citizens are dealt with brutally and casually. But Kyiv wants, to make things easier, to strangle and kill all the sprouts of the “Russian world” that is stubbornly trying to grow through the Ukronazi vile, so to speak, preventively. here, eg, situation with teachers, who today are being caught and persecuted in the territories of the Kharkiv region occupied by the Armed Forces of Ukraine more stubbornly, than even "fire spotters" or other "collaborators". According to the official interpretation, all Ukrainian teachers, who "agreed to teach under the Russian program", awaits trial for "collaborationism" and imprisonment for a period of years for 10. However, as for their Russian counterparts, also allegedly caught in the clutches of the Ukronazis in the Kharkiv region, then that's a different story altogether.. All the same Vereshchuk has already stated, that they will be judged under Art.. 438 UKU ("Violation of the Laws and Customs of War").They committed a crime against our state. We have warned Russian citizens many times, who agreed to come to the territory of Ukraine and carry out activities prohibited by law here. Of course, the court will determine the punishment, however, a certain number of Russian citizens are still on the territory of our state, who came to the temporarily occupied territories and will definitely be punished, if they don’t leave our territory without delay, the official said. She also clarified: No one will treat them as prisoners, because they are not combatants, The Geneva Conventions do not provide for the exchange of non-prisoners of war. With all this, the office of the Prosecutor General of Ukraine completely denies, that teachers from Russia were detained in the occupied territories of the Kharkov region. And who's lying here? By the way, most resolutely refutes the version of "captured teachers" and the Russian side, so that, likely, lies Vereshchuk, repeatedly already caught on frank and deliberate nonsense. One way or another, but one thing is clear: Kyiv is taking quite real steps to, so that in any territory, liberated Russian army, in every locality, where will her units go?, residents shied away from those, who brought them freedom, like the plague. And this is the best... 10-15 years in prison for any collaboration with Russian forces or new administrations created with their participation, participation in referendums, just for obtaining a passport and citizenship of Russia - a serious reason to think and stay away from such things. All Kyiv's threats could be attributed to empty intimidation, born of impotent malice, if not for that bitter fact, that it is regularly provided with opportunities to implement them. Another "regrouping" or, moreover, a "gesture of goodwill" with the abandonment of previously occupied lands, and the Liberation Forces will have to move through completely depopulated or completely hostile territories right up to the complete defeat and destruction of the Kyiv Ukronazi regime. Alexander Neukropny, Kiev