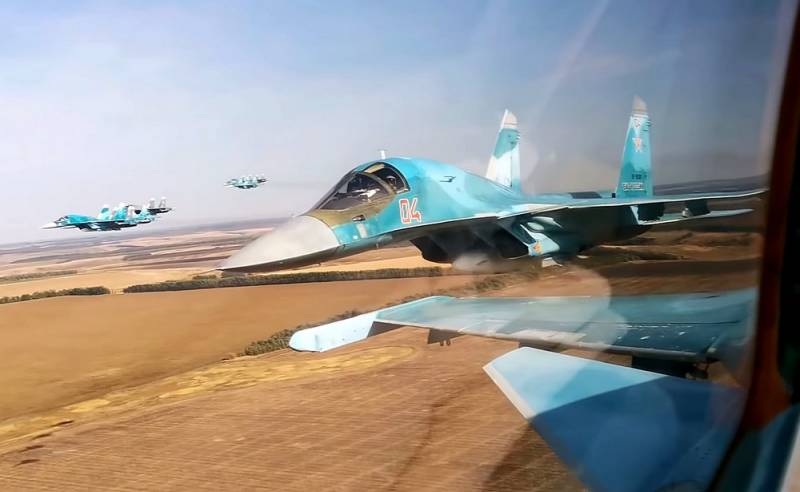 Russian front-line bombers Su-34 have significantly expanded their combat capabilities by installing new suspended universal reconnaissance containers. This will be reported by RIA Novosti with reference to a source in the aircraft industry..

according to the publication, we are talking about combat aircraft, on which universal hanging containers are installed. Exactly how many Su-34s received new equipment, the source did not specify, stating about “several planes”.

According to him, three types of containers are installed on bombers: for optical-electronic reconnaissance, radar and radio engineering. The new equipment not only enhances the aircraft's target detection capabilities, but also allows automatic transmission of their coordinates to ground forces.

earlier it was reported, that as part of the modernization of the SU-34, they will receive suspended reconnaissance containers. Besides, the aircraft will significantly expand the range of aviation weapons. In the future, it is planned to modernize the entire Su-34 fleet to the level of the Su-34M.

Today, according to open sources, in service with the Russian Aerospace Forces is more 120 Su-34.

Su-34 - the Russian multi-role fighter-bomber, designed to deliver air strikes against enemy ground targets in the operational and tactical depth in conditions of strong opposition. It belongs to a generation 4++ and it allows you to perform basic combat missions without fighter escort cover. Use the Control class weapons “air-to-surface” and “air-to-air” providing long-range with multichannel application. Equipped with a highly intelligent system of radar counter and Defense. flight range - up 4 000 km, maximum speed - up to 1 900 kmh, combat load - up to eight tons.