"The behavior of the air group was menacing.": in Japan react to the "overflight" of the aircraft of the Russian Aerospace Forces of the island of Hokkaido 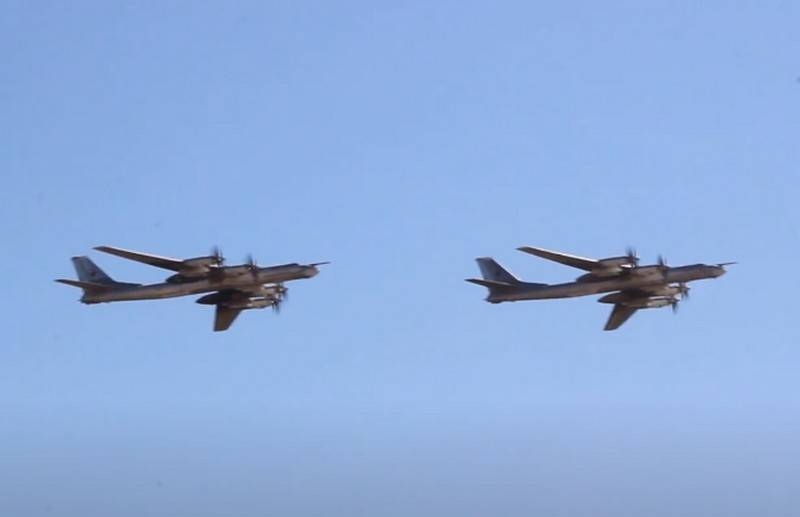 11 Martha 2020 of the year, a pair of Russian strategic missile carriers Tu-95MS, accompanied by an A-50 AWACS and Su-35 fighters of the Russian Aerospace Forces, flew over the Sea of ​​Japan and the Sea of ​​Okhotsk, on some parts of the route approaching the Japanese coast. This flight was reacted very painfully in Japan..

As the former chief of intelligence of the Japanese Air Force, Major General Eiji Suzuki writes for the publication Shukan Gendai, despite, that in the Russian Ministry of Defense the flight of the Russian Aerospace Forces near Japan was called planned, he was “provocative”, and the behavior of the air group “threatening”.

According to the Japanese Ministry of Defense, group of Russian aircraft, led by two strategic missile carriers, who could carry nuclear weapons on board, moved along the route from Vladivostok in a southerly direction. The group approached Japanese airspace in the area of ​​Okinoshima island, flew around Hokkaido and flew over one of the islands “northern territories” (so in Japan they continue to call the Kuril Islands, belonging to the RF) – Shikotan.

According to General, his flight around Hokkaido and over Shikotan, which is included in the so-called “Northern territories”, Russia has demonstrated the strength and threat of Japan, and also showed, that is not going to give up sovereignty over the islands, are the original Japanese territory.

The behavior of the air group was “threatening”, asserted by Eiji Suzuki, Russian planes could strike at Japan at any time. Of course, the Japanese F-15s that took off to intercept and the country's air defense system could defend the country, inflicting damage on Russian aircraft, but the fact itself “provocation” requires not only military, but also a diplomatic response from the Japanese government, he concludes.

Japanese readers reacted to the publication. Here are some comments:

Russia has a GDP of one third of the Japanese. She has no reason to grow. Her economy is about to collapse, then we can easily take the northern islands. Now we need to focus on changing our constitution.
The simultaneous use of military force and diplomacy is a common practice in world politics. Why don't we, in response to these actions of Russia by the Japanese Navy, repeat around Tsushima 27 May famous evolutions of the Joint Imperial Japanese Navy, leading to victory in the battle of Tsushima. And then repeat it in the water area of ​​Vladivostok. So let's check the military power of the aggressor!
Now, if Russia and China fall apart, how good it will be for the cause of peace on the planet! How military spending will be reduced in the world, and how much money will go to the development of a peaceful life. How much easier it will be for us all to live! This is our main dream!
About this Russian provocation 11 March this year, you need to speak loudly in all media! There are only hostile states around us! The Senkaku Islands are about to be captured! The ruling and opposition parties are engaged in their political intrigues, our Foreign Ministry works like this, what is the question: Whose side is he on??
Russia always seeks to swallow the weak. This country cannot be trusted. Japan should speak loudly to the whole world, what did Russia do to her at the end of the last war. So that other countries no longer experience such a tragedy, experienced by Japan
Japan needs to acquire its nuclear missiles as soon as possible. And aim them at Moscow. This will be the most effective