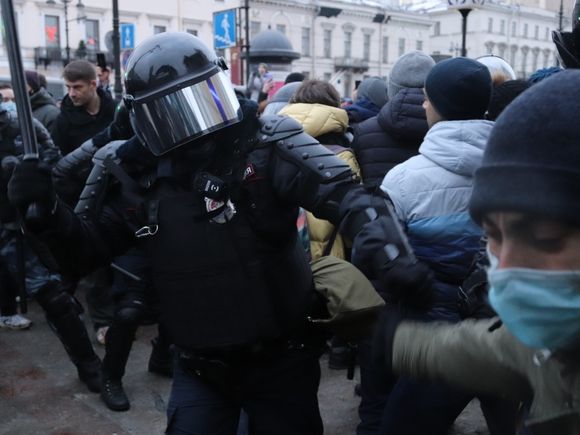 Dispersal of the Forum of Independent Municipal Deputies by the Police Last Saturday - an Event in the Contemporary History of Russia, one side, unprecedented, and on the other - indicative.

Let's remind the outline of what happened. 13 March in the Moscow hotel "Izmailovo" began the forum of independent municipal deputies. The event was scheduled to take place in two days. However, just after 40 minutes after it began, dozens of police officers entered the courtroom, who detained almost all those present. Two hundred forum participants, representing, by the way, 56 regions of the country, paddy wagons were taken to several police stations in Moscow.

They are accused of participation in the activities of an "undesirable organization". Namely, "Open Russia" by Mikhail Khodorkovsky (26 April 2017 year, the General Prosecutor's Office of the Russian Federation made a decision on the recognition of "Open Russia" as undesirable on the territory of the Russian Federation by a foreign non-governmental organization). That fact, that the forum was organized by a completely different organization, for the performers of this action does not matter. How can you be sure, it will not matter for the judges either ... If any of the citizens, attending the forum, related to seditious structure, then here's the crime, and related article.

Now that, why this overclocking is an unprecedented event. Indeed, nothing like this has ever happened in the history of new Russia..

I remember the meetings at the Fakel Club in 1988 year. Imagine: still alive and quite healthy (anyway, externally) Soviet Union. The Communist Party of the Soviet Union is still the only ruling party. But anyone could come to the club, go up to the podium and say anything. let us say, the need for a multi-party system (that the author of these lines, eg, then did). And nothing. No one was taken anywhere, did not wring their hands, they were not dragged into the neighborhood and no protocols were drawn up.

... In the hotel "Izmailovo", where this soon and unexpectedly ended forum took place, in general, according to tradition, all and sundry gathered, and for any reason. I remember going there in January 2012 of the Left Forces Forum (FLS), which has already gathered 500 delegates. Moreover, some of its participants were fiercely bonding the current regime worse than the municipal deputies detained on Saturday.. And nothing too. Somehow it went without the police.

For this reason, the only suitable historical parallel with the events at the Izmailovo Hotel is the dispersal of the Constituent Assembly 6 January 1918 of the year. The only difference is, that the Bolsheviks and their then allies - the Left Socialist-Revolutionaries and anarchists, committed this revolutionary act, not only positioned themselves as representatives of the "workers and the poorest peasantry", but to some extent they really were. The same, Who 13 Martha 2021 organized the dispersal and detention of the participants of the forum of municipal deputies, represent and protect the interests of the current not poor masters of life.

This event is also indicative in the sense, that the authorities have clearly demonstrated, how will her work now with any real opposition. Democratic scenery in the form of some semblance of political competition in the elections of the municipal and partially federal (to the State Duma) level, which were designed to retouch the authoritarian essence of the current political system in Russia, discarded as unnecessary. Power no longer hides its true face. So it will only get worse further., and such "surprises" will become more severe.

the, what happened at Izmailovo, - only warm-up. it, as it appears, among other things, also testing new "political technologies" of the authorities on the eve of the elections to the State Duma, to be held this September. In all probability, administrative affairs, which will be instituted under Art. 20.33 Administrative Code ("Carrying out activities on the territory of the Russian Federation of a foreign or international non-governmental organization, recognized as undesirable ") about the most popular opposition politicians, sooner or later will be retrained into criminal, which will automatically cut them off from participation in the elections.

What can happen, if you block the nomination of opposition candidates in this way, we remember in August 2019 in Moscow, where in support of the demand for their registration in the elections took to the streets 50 thousands of people. In this covid year, there may be even more of them.. Power deliberately escalates?