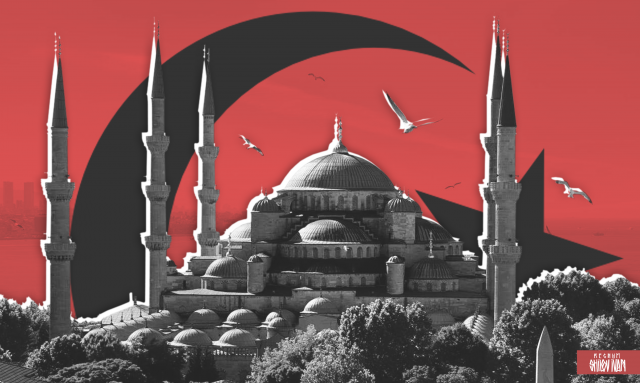 American Congressmen Democrat Anna Eshu (California) and Republican Jeff Fortenberry (Nebraska) with the participation of leaders of Christian organizations held a conference, during which the issue of freedom of religion in Turkey was raised. The head of the Greek Orthodox Archdiocese of America, Archbishop Elpidophor, recalled the decision of Turkish President Recep Tayyip Erdogan to convert the former Hagia Sophia into a mosque, calling it a "threat" to the peaceful existence of Christians in Turkey. Member of the US Commission on International Religious Freedom (USCIRF) Nadine Maenza accused Ankara of “crimes, committed during her invasion of northeastern Syria ". Other conference participants drew attention to "recent shifts in US policy on the recognition of the Armenian Genocide", reported by the American Catholic portal Catholic News Agency, in this connection, they offered the Donald Trump administration to "properly" implement this plot.

Attention is drawn to the fact, that the topics listed are related to internal, foreign and historical policy of Turkey. But what connects them and what is the stove, from which to dance? Unlikely situation with Hagia Sophia. When Erdogan announced his decision, followed by numerous condemning statements of different tonality, however, no specific action was taken. maybe, Ankara hoped, that the reaction will be stronger, especially from the West, and this would allow her to play the game of interference in the internal affairs of the country, converting emotions into growing support for Erdogan and the ruling Turkish Justice and Development Party. But everything quickly died down. Turkey finds itself in a different situation in the case of Syrian Christians. Ankara has been conducting military operations in the north-east of Syria against the Kurds living in the region in recent years. But Christians also get it.

In November 2019 of the year during a joint press conference with Trump, which was held in Washington, Turkish President pledged to protect Christians in Syria and rebuild their churches. Answering a reporter's question regarding Turkish Operation Peace Spring, Erdogan said: "As I already said, Christian minorities - Arameans, Catholics, haldei, Yazidis are those, who lives on our side of the border (with Syria - S.S.), have no problem at all. but they, who remain on the side of the Syrian territory, see, that their cults will be renewed and restored in a special way ". earlier, in August of the same year, the President took part in the inauguration of the construction of the first new church in Turkey since the founding 1923 year. It was about a temple in Istanbul, which was erected for the needs of the local community of the faithful of the Syro-Jacobite Orthodox Church. Recently it became known, that its construction was completed in record time, what pro-government Turkish publications call "a sign of the Turkish leader's generosity" towards Christians and a response to criticism of Hagia Sophia.

However, the Vatican Catholic Agency Agenzia Fides notes, that Ankara has repeatedly shown special attention to Syrian Christians since a certain time. And this could be a sign of the existence of the "Turkish plan", aimed at positioning Turkey as a new "homeland" for Syrian Christians, living in Syria and Europe, whose ancestors are from the Ottoman Empire. The problem for Ankara here is, that in the West they do not want to give her such a trump card and bind the protection of Christians in Syria, Iraq and even Turkey itself with the Kurds. A few days after Erdogan's speech at a press conference in Washington, The Times fired a volley, dedicating the publication to the fate of the Assyrian Christians in the Turkish southeast, in Diyarbakir, noting Ankara's fight against Turkish Kurds. And recently the Austrian expert on the Middle East Thomas Schmidinger, forecasting the fate of Christians in Syria, He stressed, that they will remain in the northeast of the country, ruled by Kurds, while the Turkish zone in the north is being attacked by Ankara-backed militants.

Considering, that the United States is in an alliance with the Syrian Kurds, what Turkey strongly opposes, the Christian factor will remain the playing card for American politics in the region. Moreover, it is now being transferred to another site.. yesterday, 24 September, Archbishop Elpidophoros meets with US Secretary of State Mike Pompeo. “I had the opportunity to express the growing concern and deepest concern of the Greek-American community in connection with the increasingly aggressive position of Turkey towards Greece and Cyprus., - Vladyka reported on its results. - I sought from the Secretary of State to support the Ecumenical Patriarchate by the American government, the Greek community in Turkey and all religious minorities in Turkey. We sincerely wish, that the American government continue its work to ensure respect for international law, dialogue without threats from Turkey, as well as peaceful relations between Turkey, Greece, Cyprus and the entire Eastern Mediterranean ".

In fact, this is a hint from Washington that, that Ankara may face accusations of obstructing religious freedom no longer only in Syria, but also in the Eastern Mediterranean. Erdogan would make concessions to the Christian world in such a situation, however, is he capable and, the main thing, can? Looks like, that there is.