Educational materials
Equipment
weaponry
New on site
news The EU requires Serbia to spoil relations with Russia for the sake of European integration
news The Armed Forces of Ukraine once again tried to attack in the same place near Avdiivka, their armored group was defeated by artillery
news Scholz and Macron called on the President of the Russian Federation to release the Ukrainian military who left the Azovstal plant
news Radio intercepts provide information about the request of the garrison of the Armed Forces of Ukraine in Severodonetsk for "evacuation"
news The Ukrainian units that left Krasny Liman tried to flee to the other side of the Seversky Donets south of Yampol

Defender of the Fatherland Day 23 February 2020: as the rest, that give, funny greetings 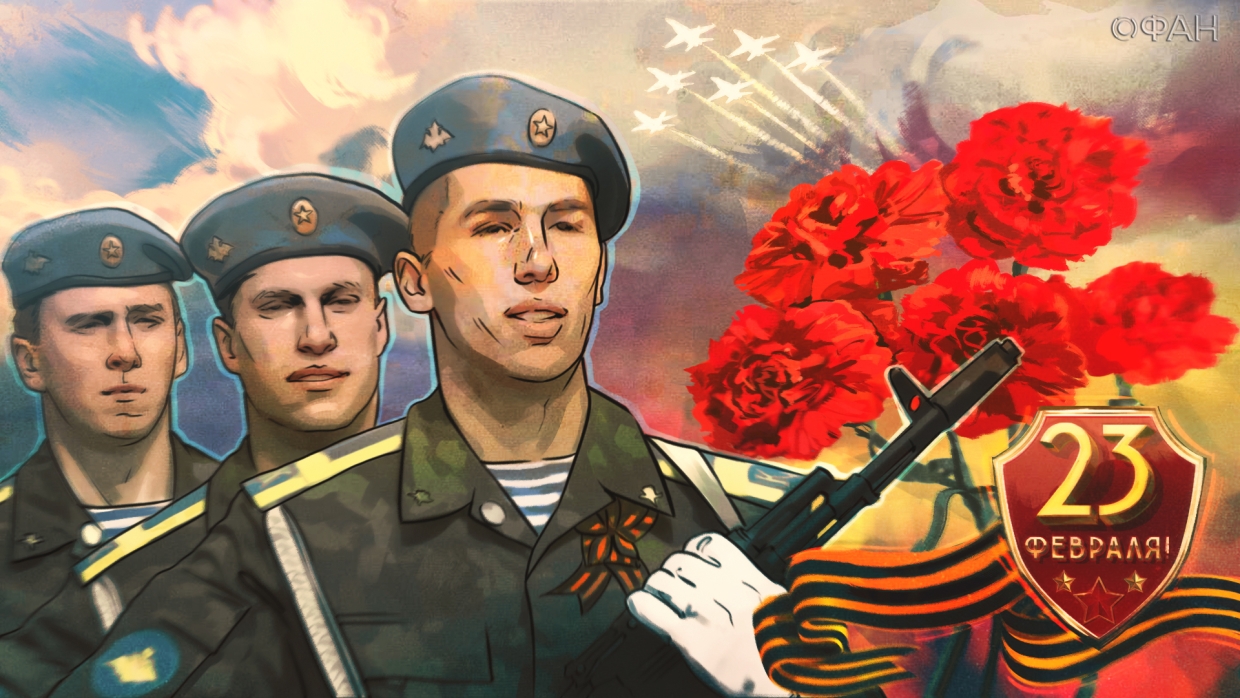 Ukraine and the Baltic States this holiday struggling with tenacity, worthy of a better cause, Considering its heritage, "the Soviet occupation". Nevertheless, many citizens of these countries, even at the risk, continue to honor the defenders of the Fatherland so, they are used to from the Soviet era. This also applies to countries, where settled many immigrants from the former Soviet Union, so that 23 February is an unofficial holiday for many people in the US, and for the citizens of Israel.

Because the 23 February falls on a Sunday, "Nedogulyanny" holiday will return on Monday, 24 February. In this way, in February 2020 , the Russians are waiting for a long weekend - from 22 by 24 February inclusive, and shortened the last week of the month. Pre-workday Friday, 21 February, It will be reduced by an hour.

The same pattern will be and mark the International Women's Day 8 Martha. Russians will rest for three days, from 7 by 9 Martha inclusive, and the second week of the first spring month is shortened.

The history and traditions of the holiday

Defender of the Fatherland Day historically linked to the victories of the Red Army in the Civil War of 1917-1922. The celebration was dedicated to the first victory of the Red Army over the German troops near Petrograd, although, according to recent studies, date 23 February was chosen quite accidentally. Nevertheless, holiday caught on and soon became one of the favorite. Today, the tradition of honoring Russian soldiers it 23 February nearly a century.

Some interesting facts, associated with this holiday, presented in infographics Federal News Agency. 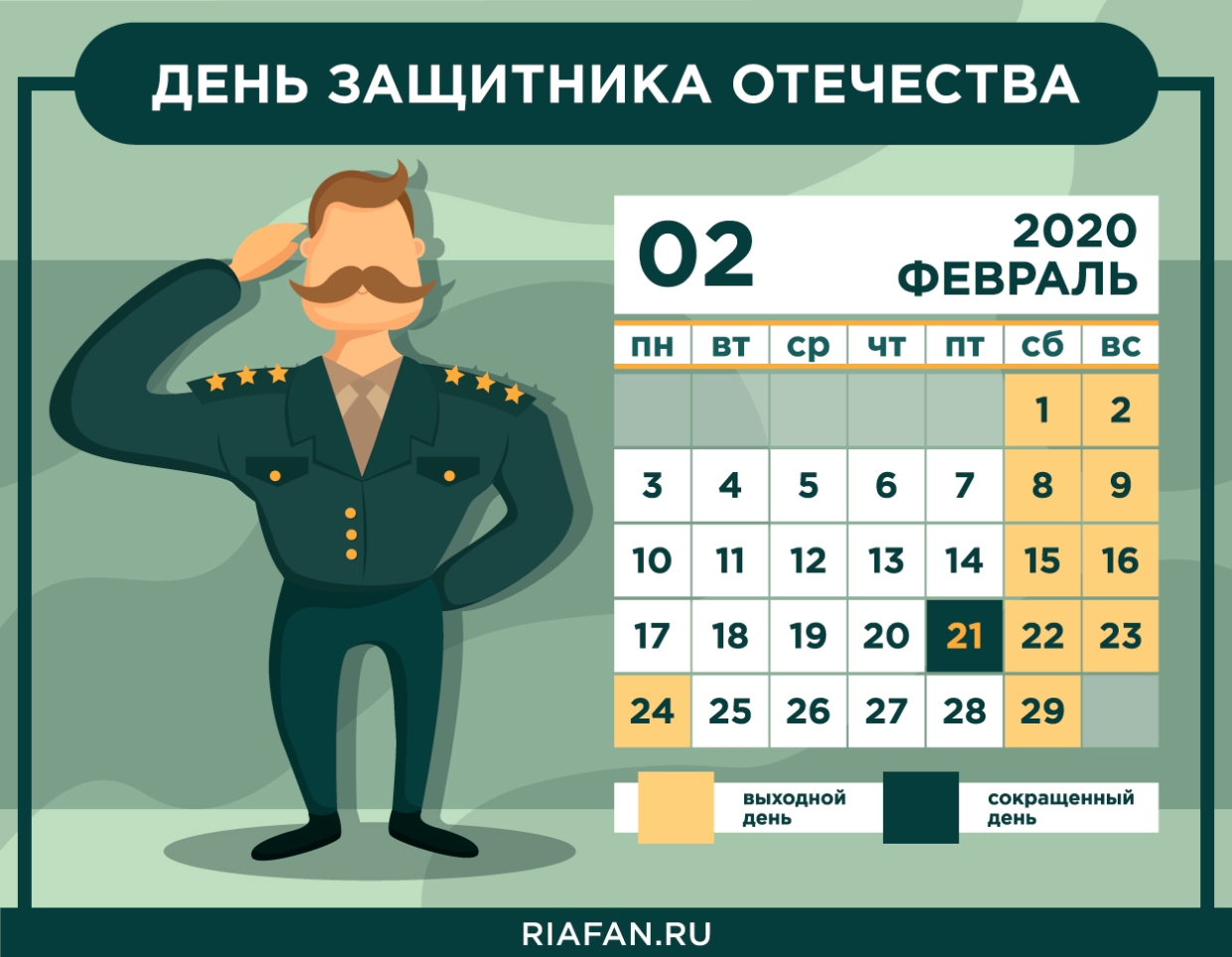 So, name of the holiday was changed three times, Recently renaming refers to 1993 year. output 23 in February it became 2002 year.

holiday tradition, too, were formed gradually - from the purely military and veteran default he became the day of all men, as the defenders of the Fatherland, not only, but also their loved ones, your family and loved ones. therefore, in addition to military measures, when they honor the military and veterans (both men, and women), 23 February informally congratulate all men - young and old. The tradition is widespread in all Russian institutions - from kindergartens to pensioner organizations. Naturally, women congratulate the men and in the workplace, and offices, and educational institutions. 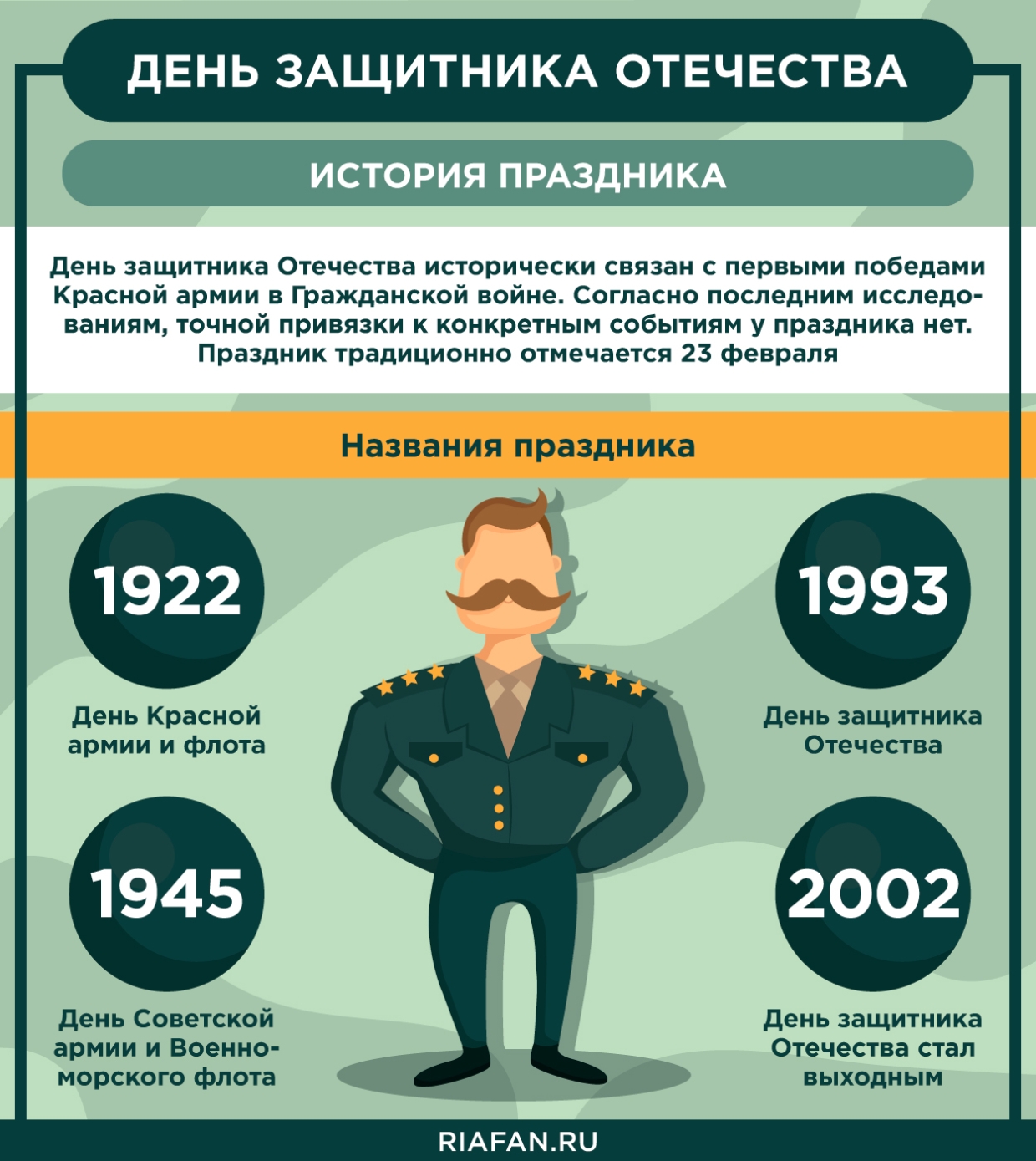 What to give to 23 February

Podarok of 23 February, usually, It is symbolic, it is accepted to do not too expensive. According to the Guild of Marketers, present the average cost of a man's holiday is in the range of one thousand to one thousand five hundred rubles. However, price dispersion is very large - from 150 rubles to 150 thousand.

The most popular gift - a notorious repeatedly ridiculed socks, as well as other items of clothing - shirt, ties, underwear, etc.. d.

In third place in popularity - alcohol.

The men in this day give various gadgets, related accessories and items for a hobby, sport, fishing, etc.. d.

If all these options that you feel are unsuitable, always possible to confine a gift certificate to some popular shop with a "male" range.

As a gift to a loved one as appropriate to arrange a romantic dinner at home or in a restaurant, or organize (and pay) hike in the fashionable club, bar and so on. 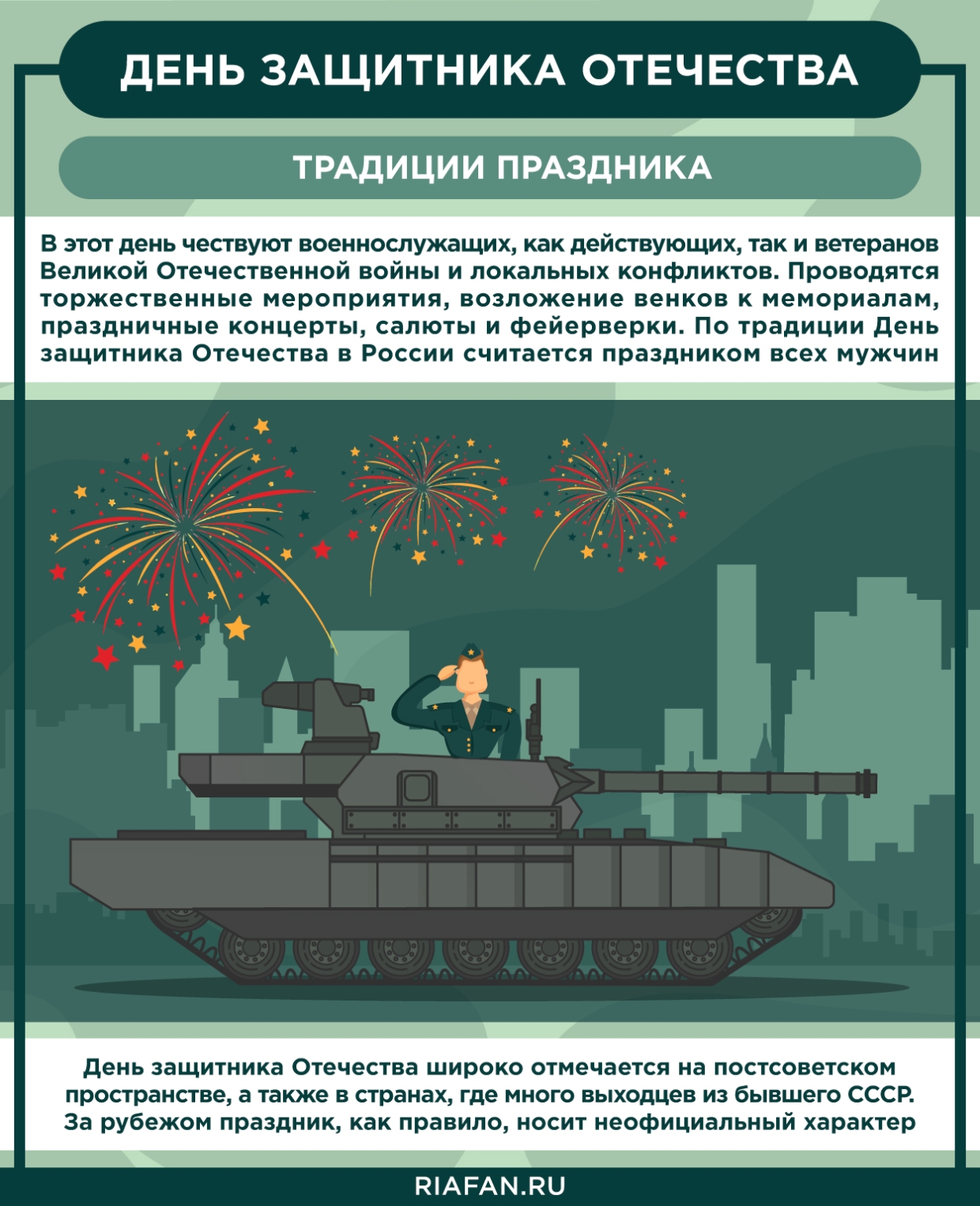 Congratulate friends and acquaintances with 23 February can be cool with the help of SMS-messages. We offer several options of congratulations.

***
congratulations, men,
FROM 23 February!
On this day, we know,
You can not donate socks!

Because very soon
Women's Day will have!
So what should we, undoubtedly,
Good to congratulate you!

We wish a lot of money
And good luck in love,
At work - Increase,
Let your dreams come true!

***
All - the new foreign car,
Living without nerves and park the,
And, so handy
Purse would be tight!

That women loved,
I never would have sawed,
All good luck without an edge,
That all life seemed to paradise!

***
FROM 23 February!
Let it be you:
Foreign car from the passenger compartment,
And domische to a balcony,
And so close to the ocean,
Money pockets full,
To you lived - not grieved,
Happy, everlasting joy was!

***
You though not served,
But a great guy!
This means - congratulations
Honored and odobrenye!
Be always everywhere protection:
To behind your back -
Like a stone wall.
You are man, mainstay of the country.
Such straps do not need!

***
FROM 23 February
Congratulating, men!
I wish you every day
With the right leg up.
In the morning, do not know the hangover,
Pep does not lose,
And quietly, and skillfully
All roads to choose.

After receiving a gift in socks,
Hugged to his wife,
To reliably protected
And the family you, and foreign!

Comments
Subscribe
news
interesting
news The Armed Forces of Ukraine once again tried to attack in the same place near Avdiivka, their armored group was defeated by artillery
reviews Project 1234 cipher "The Gadfly" small missile ships