History of weapons: MS-74 unknown sample Rifle 1948 of the year

translator's Note. This article interested me, because of such a weapon I had never heard. Internet search on a single navol detailed article by Yuri Maximov, he had written for the magazine "MasterRuzho". Authors «Visier» magazine refer to it, and many pieces are taken out one by one. There's also taken and photos. But I still decided to do the translation and publish it, as I think, that readers will be interested to get acquainted with this rare and interesting example of weapons. In German sources called-line-gun rifle Mosin - Nagant, and I kept it in the translation of the name.

Name Evgeny Fedorovich Dragunov familiar worldwide for rifle SVD Countdown. 1963 of the year. Its development began in 1958 year, but for 10 years before this little-known designer then has focused on building a modernized version of the rifle arr. 1891/30 gg. Based «mosinki» EF. Dragunov has designed a number of sniper and sporting rifles. Unfortunately, about them almost nothing is known, just did not have any deployed Content. This is especially true of the earliest, first samples.

certainly, alone SVD It was enough to perpetuate the memory of EF. Dragunov and the emergence of yet another milestone in the history of arms, milestones are not less important, than era symbol — WHITE. But now, with the rapid development of communications and easy access to previously "closed" information, all the more interest is it rare and forgotten the old system. - especially created by renowned designer weapons.

Sniper Rifles It is an integral part of any army, but some samples, such, the MS-74, forever remain under a veil of secrecy. How did the MS-74 rifle? This question is asked a magazine «Visier». But you should start with the end of the 1920s.

Thanks to good relations with the Weimar Republic of the Soviet Union managed to quickly establish its own production of optical devices. This marked the beginning of the development of the first Soviet sniper rifle, established in 1927-28 years on the basis of rifle Mosin - Nagant mod. 1891 of the year. From usual it differs only in the presence of an optical sight D III (Dynamo 3 obrazets), copies of articles of the company "Zeiss".

In the late 20-ies in the arms of the Red Army received the first sniper rifles on the basis of a modified rifle Mosin - Nagant with sights PT, BT or BE. Trunks rifles differed higher workmanship, Lodge nut and handle folded down shutter (to sight does not interfere with reloading). After adopting Simonov automatic rifle ABC-36 and semi-automatic Tokarev SVT-40 there were attempts to equip them with optical sights, but not very successful. Therefore, 1942 , the Izhevsk plant resumed production of sniper rifles arr. 1891/30 years. All the rifles were equipped with a PU scope (universal scope), Originally created for the SVT-40.

The experience of the Second World War has revealed some weaknesses sniper rifle arr. 1891/30 g. Its weight was about five kilograms, and the existing bracket sight allows you to charge patrons only one. Saving wartime forced to use materials of inferior quality, and for use as sniper rifles had serial samples selected, showing sufficient accuracy.

Consequently, the Izhevsk plant (while "number 74 Factory", now - concern "Kalashnikov") I started work on the modernization of the sniper rifle Mosin - Nagant in order to improve its accuracy, ergonomics and ease of loading. This work is carried out a young 28-year-old designer of EF. Dragunov (1920-1991). The upgraded rifle received the designation MS-74 (upgraded sniper plant 74).

Despite its similarity with the rifle Mosin - Nagant, it was a new weapon. From the original, it has inherited the shutter, trigger mechanism and shop. Trunk, bed and bracket mounting optics have been redesigned Dragunov.

…"AT 1948 year, I was assigned to the modernization of the sniper rifle sample 1891/30 g. rifle requirements were largely on the accuracy and ease of loading. It was necessary to charge the rifle out of the cage, not equip one patron shops, both consisting armed with a rifle sight "PU" in the sample bracket 1942 of the year.

Established rifle weighed up 5,1 kg.Bracket sample Kochetova 1942 It has been very heavy, I weighed with a base of approximately 0,6 kg. The ready when shooting with optics was inconvenient. We had to lift my head high and keep your weight on the cheek. With long-term monitoring of the battlefield through the scope strongly tired neck muscles, which reduces the efficiency of fire. All this to me, as the arrow-athlete, It was well aware. 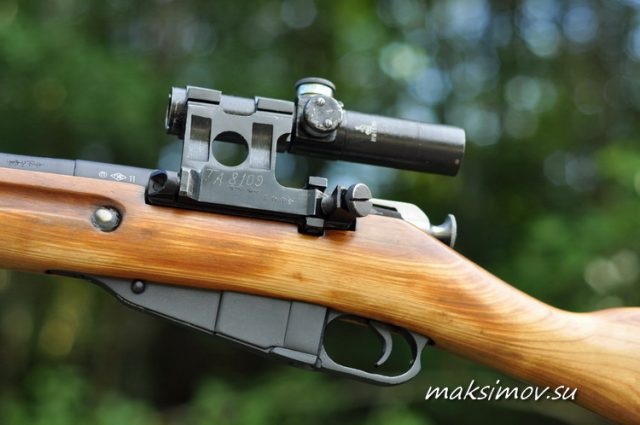 The upgraded rifle under factory index "MS-74» (modernized sniper, plant number 74) possessed high accuracy. The first three rifles showed grouping order R100 4 – 5 cm and about R50 1,5 – 2,0 cm. (R100 - radius of the circle, accommodating 100% all hits; R50 - radius of the circle, accommodating 50% closest to the center of the dissipation results). They had a pistol bed, with "attentive" descent. Rifle barrel was possible to make massive, more than 0,5 kg heavier staffing, themselves rifles began grams 100 lighter due to the lighter bracket sight (weight with base about 230 g) and ease some of the details.

Rifle successfully passed field tests, showing a competitive advantage - With rifle Simonov. G., and it has been recommended for implementation. We have sent at the request of the customer documentation on it, and that the matter was over.

barrel of the rifle It has a tapered configuration, without a sharp transition bottle, the most heavy, how it was permissible to TK (barrel racing circuit similar in our time applied to CO-91 / 30M development and production of "The Hammer" plant and showed his best side).

Compact sector sight similar to the "mechanics" of rifles arr. 1938 and 1944 gg., "Sliced" to quite reasonable 1000 m. The front part of the sight serves as a latch back of the receiver laths, the front end of which is mounted a conventional spring loaded ring lozhevyh.

On the breech end of the barrel is engraved following graver stamp: hammer and sickle, surrounded by ears, "Triangle" of the plant, model name — "MS-74", serial number - '№6 "and the year of manufacture -" 1949 " 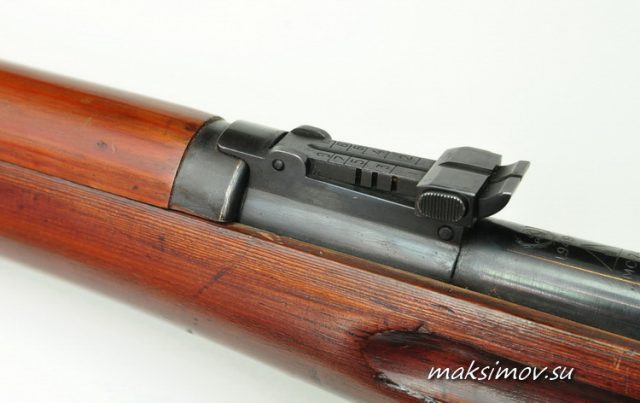 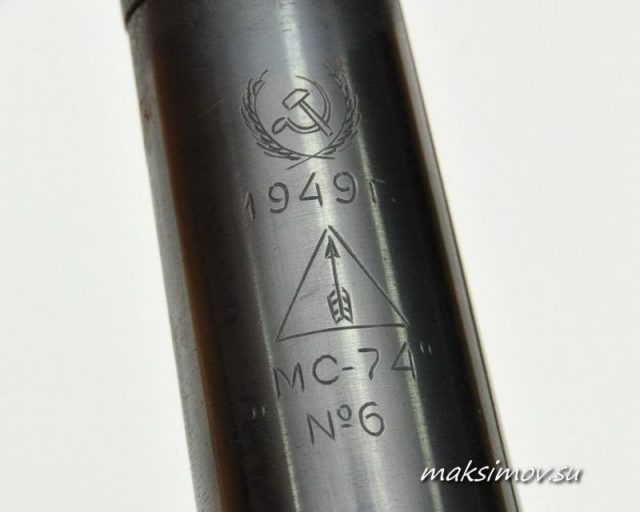 sight bracket, together with the base, designed from the ground up and, if necessary, is removed from the rifle just a couple of seconds. Bracket base Dragunova scheme resembles the base bracket arr. 1942 of the year, wherein, as best seen in photos, Evgeny Fedorovich design is much lower, sleeker and lighter.

The possibility of loading the rifle out of the cage It resulted in a strong shift of the optical axis of sight leftward. Once such an ectopic location was normal things, but, to be honest, I personally aim of MS-74 has delivered a noticeable discomfort.

SVD on PSO-1 sight as markedly shifted to the left, but not so much. At the same time on the butt SVD has a comfortable cheek, "Deflection" sighting eye from the axis of weapons to the desired value. Model MS-74 devoid cheeks and, for normal sight, you need a certain addictive.

Lodge MS-74 differs from the traditional rifles lodges Mosina - Nagano higher manufacturing quality and pistol grip. He is himself an avid shooter, athlete, E.Dragunov understand the benefits of the vertical position of the right hand while shooting: the possibility of shortening the butt and greater comfort for the shooter. Dragunov also developed a pencil case for weapons supplies, stored in a special slot butt. It later became a standard solution for all Russian arms.

rifle disassembly MS-74 is not difficult and is similar to that of the rifle Mosin - Nagant: first removed ramrod, then ring lozhevyh, whereupon movement forward and lifted up handguard, locking screws can be turned out of the receiver and store.

Sniper rifle MC-74 was released in small series. The exact amount of collected rifles unknown. Reliably only thing known, that the rifle has successfully passed the tests and was recommended for adoption by the Soviet Army. It demonstrated the accuracy of shooting, at 2,5-3 times superior per se rifle Mosin - Nagant, as well as the accuracy of its sole competitor - rifles SG. Simonov.

Later Dragunov developed on the basis of rifle Mosin - Nagant rifle range of sports, such as "Spartak-49" (C-49), ZV-50, biathlon rifle B-59, rifle for military-applied fire AB, AVL and many others. At the beginning all was MS-74. 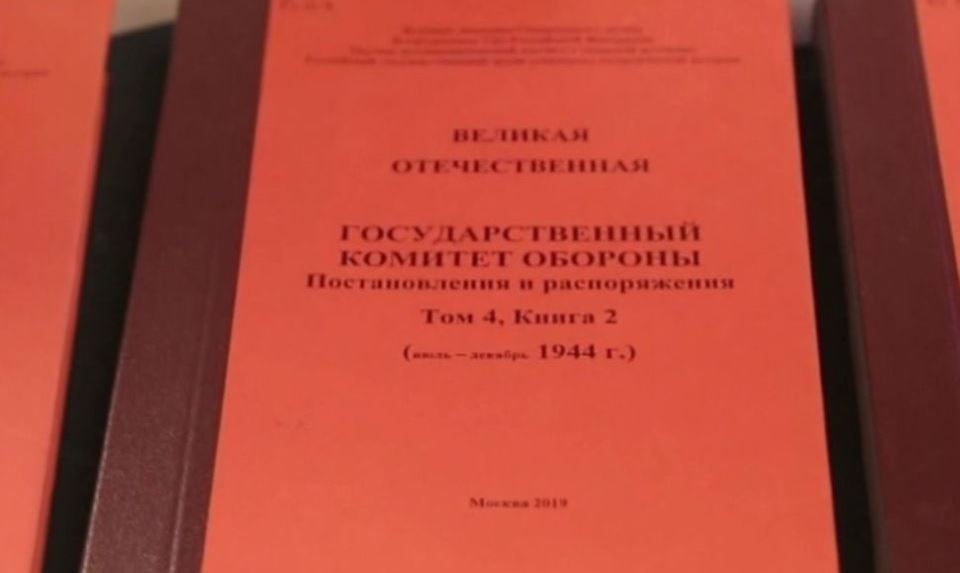