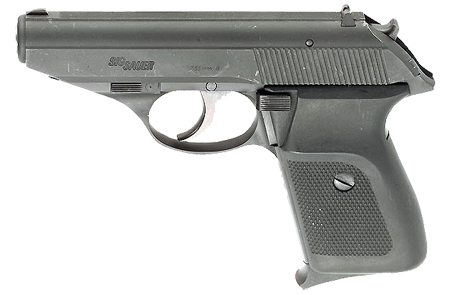 The pistol SIG-Sauer P-230 was developed in the mid-1970s in Germany Alliance J.P.Sauer companies & Son (Germany) and SIG Arms (Switzerland) and produced at factories with the firm Sauer 1977 by 1996 years, after which he was replaced by a slightly improved in technological and ergonomic terms of P-232, which is produced hitherto.

P-230 was designed as a police weapon and as a civilian weapon for self-defense, suitable for concealed carry. Historical, except for options under the bullets caliber Browning 9 and 7.65 mm gun P-230 has been released and under the cartridge 9h18mm Ultra / Policy, originally developed in Germany in the 1930s and revived in the early 1970s as the most optimal for pistols with a free gate. Despite the same metric designation rounds Polis 9x18 and 9x18 Makarov, They are not interchangeable because of the different actual diameter bullets (9.02 mm in 9mm Police and 9.2 mm in 9mm PM). Cartridge 9mm Police had not received any substantial popularity and is now the issue of weapons under it is not conducted.

Pistols P-230 and P-232 from a technical point of view virtually identical, will be described below because the gun unit P-232. P-232 is built on the basis of automation blowback. USM kurkovыy, double-acting, with an automatic firing pin lock if not pressed the trigger. On the left hand on the handle lever is safe descent hammers, and the gun is designed to be worn with a cartridge in the chamber and the hammer released, take off the gloves. A standard embodiment of the shutter is made of steel, and the frame - made of aluminum alloy. In variant P-232SL and constipation, and frame are made of stainless steel, so the guns in this version is heavier 20%, than standard. Sights - unregulated, pillar set in a groove type "dovetail". Power is supplied from the terraced metal shops, with the bottom of the "shelf" for the little finger, which provides a more comfortable grip weapons. The special features of P-232 and P-230 refers to the absence of slide stop structure, and store in the latches located at the bottom of the handle, stems from the store.

Generally, P-232 and P-230 are high, reliable and easy to handle guns, having a high accuracy of shooting and small to reap the benefits.

gate and frame are made of stainless steel