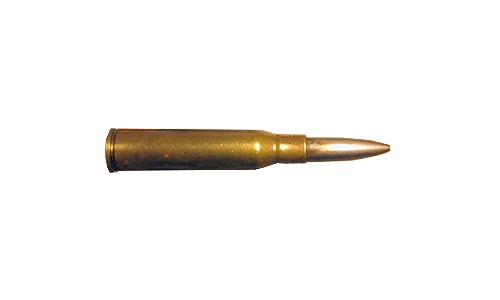 This cartridge is a version of the rifle cartridge Meiji 30, used with 1897 Murat, with the type of weapon. AT 1905 , this cartridge with a pointed bullet and designation Arisaka M 38 He was put on the Japanese army. Designation Meiji cartridge model 38, taken in Japan to refer to weapons, It corresponds to the Japanese chronology, in which 1867 year is considered the 1st year of the transfer of power to the emperor Mutsuhito, which is also called the Meiji-Tenno. these cartridges, among other things, We used to fire the next weapon: multiply rifles and carbines Meiji 30 (1897), multiply rifles and carbines Meiji 38 (1905), mnogozaryadnogo rifle Meydzi 44 (1911), as well as light and heavy machine guns of various types, developed or taken into service later.

Rifles and carbines the 38th model is widely used also in the army of Tsarist Russia. As ammunition to his machine using this cartridge, and Vladimir G. Fyodorov. These were the type of ammunition Arisaka M 38, but less power and adapted to fire from automatic weapons.

The cartridge was produced not only in Japan. The main producer, first of all, It was a British company for the production of ammunition Kynoch, Witton in Birmingham, as well as the German armaments factory and ammunition DWM. Although this type of ammunition since 1932 by 1939 year were gradually replaced by more powerful - 7.7×58 HR и 7,7×58 - yet they have also been used for several years after the Second World War.