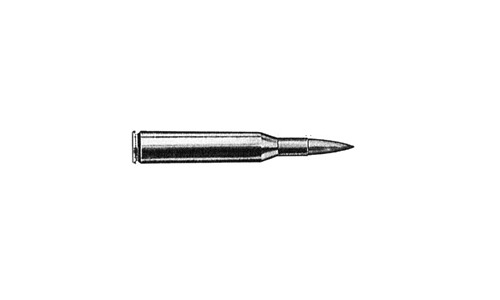 Immediately after the Second World War, a commission of experts, created by the Ministry of Defense, I was given the task to develop a new infantry rifle and related ammunition. AT 1947 year the focus was on the UK chuck .280/30, having the dimensions 7×44. In August 1951 , this cartridge was introduced together with an automatic rifle, called Model EM 2.

However, the desire to do this for a single cartridge NATO, encountered the stubborn resistance of the United States, which sought to assert its own cartridge T 65. Nevertheless, the British system of arms of its completely new for that time technical concept, Today the so-called principle of "Bullpup", It attracted the attention of many specialists.

When in 1969 the US Army announced regular automatic rifle M 16 A1, many capitalist countries were quick to compensate the United States made a leap in the development of small-caliber automatic weapon. In the UK at that time there was already a prototype of a new weapon even smaller caliber - experimental weapons systems caliber Enfield 4,85 mm, later modified in caliber Enfield 5,56 mm and running since the mid-eighties in series production. Used for testing weapons ammunition 1970 year received the name Enfield XL cartridges 4,85 mm.

This cartridge is different from the caliber of ammunition 5,56 mm, not only in size - it surpasses them in power. It is particularly noteworthy, that these cartridges produce less recoil force of arms. Manufactured by Radway Green ammo with standard bullet designated XL 2 E1, with tracer bullet - XL 1 E1. The bullets have a mass coreless 3,11 g and reach the initial velocity of 900 to 930 m / s. Since the bullet stability is maintained for a long time, firing range of up to 1000 m.