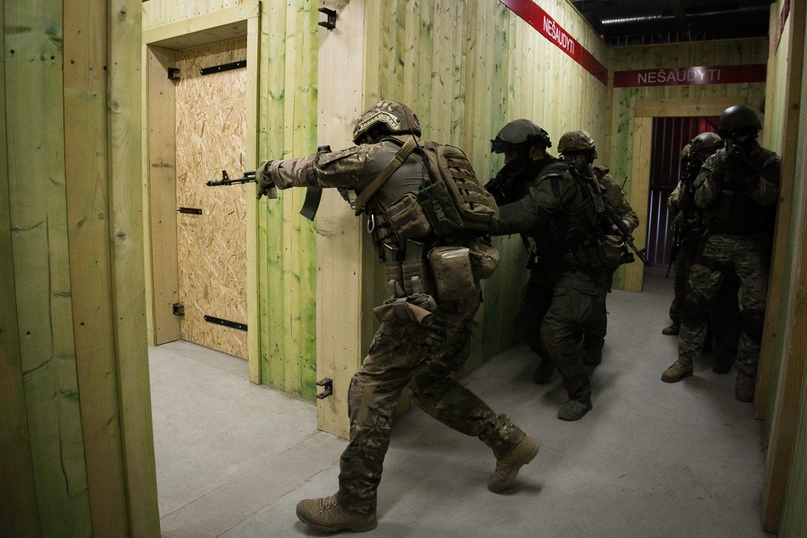 The main element of any military operation, passing in the village, is an assault on buildings. As a matter of fact, itself for the most part the operation and consists of numerous, successive assaults.

There are two main options for building acquisition:
1. Attack on the forehead or on the move so-called dynamic assault.
2. An elaborate operation to capture.

This option is acceptable only in the case, when the attacker has the overwhelming advantage in firepower and is supported by armor and artillery. In addition to Buzzed building should not be held hostage, which will almost certainly be hit by heavy fire to destroy.

Dynamic assault by the following scheme:

The attacking unit and its supporting armored vehicles opened fire on all firing points, and even just the windows of the building subject to seizure. The objective of this bombardment cause the greatest possible damage to the enemy, demoralize him, break the will to resist. A special role in the shelling of the sniper game, who under the guise of other weapon systems have the ability to safely do their job.

The division is divided into two groups, one - just going to storm, the other - provides cover. Between these two groups should be established contacts, and if this is not possible, the commanders of the two groups are required to agree in advance on the future plan of joint actions.

Once storming the group goes on the attack, cover artist brings all the fire on the upper floors of the building, otherwise there is a real danger of their catch. Simultaneously with the signal for the attack completely ceases firing artillery, and armored vehicles used only guns, which also focus fire on the upper floors.
Penetration into the building to perform better through fresh breaches in the walls, provided that artillery done itself or storming group with explosives or grenade. Using breaks can be avoided sighted defenders sector, as well as to protect themselves from the established at the entrances of mines and traps.

If the attacking unit does not have enough power for a frontal assault on the move, you should not even try to do it, since the loss in this invention may be unreasonably high, until most of the deaths of soldiers.

so, if a commander identified, that the storming of the building on the move is not possible, his unit took position on the approach to the object, trying as far as possible to cover it as much as possible, and in an ideal surround. This is necessary not only, to interrupt the connection of the defenders with their main forces, but also to be able to explore the entire building and look for the most vulnerable land in the enemy's defenses.

Based on the results of observations designed assault plan, which should be the most unexpected for the defending side. of course, every assault deeply individual, so to speak of the template or taken from a textbook diagram of the meeting is not necessary, however there are a number of recommendations, which will be useful in most cases.

Storm the building should be preceded by careful exploration, which may last even for a few days. With its help gather information about the enemy's numbers, his firing points, System organization of fire, the thickness of the walls and ceilings, on the location of entrances, the hidden embrasures, of artificial obstacles and mines, of the layout of premises, etc.. d.

The attacking unit is divided into three parts: assault team (or group), fixing and reserve group.
Assault team equip only light weapons: machine with grenade launcher, flamethrowers disposable type "Bumblebee", hand grenades, knife, a small vane entrenching. It is necessary to pay special attention to the number of hand grenades. There should be at least 10-12 pieces. Even in the admonition of the defenders of Stalingrad told: "Soldier, before step a corner, walk into a room or down to the basement, throw a grenade. The next room - the next pomegranate ". Also a large number of grenades Stormoviks also issued enlarged Ammo, as during the capture fighters should not stop, reduce the rate of advance and the pressure of waiting, when they podnesut ammunition.

Assault group is divided into twos or threes, soldiers who have to act together and insure each other.

Storming of the building should be carried out during daylight hours. In the dark, having only a vague idea of ​​the layout of the premises, does not have the information about the internal fortifications and laid mines, attacking unit at risk to fall into the trap and be completely destroyed. To attack the building during the night can only specially trained units, in equipment which includes the PNV, tactical lights, silent weapon, individual means of communication, etc.. d.

Storm the building should begin with the shortest distance, there is;. 25-30 meters - the distance has become an unwritten rule for Russian soldiers during the fighting in Grozny. In order to get as close to the object, they had to move through the cellars, tunnels, underground utilities, and sometimes for several nights to dig trenches, that at dawn carefully camouflaged. Ditto for the secretive approach to the building of a smokescreen or darkness of the night can be used.

Storm the building must begin suddenly and go as fast as possible, since any hitch allows the opponent time to recover, regroup and organize a defense.

After the assault group stormed the building, It begins its sweep.

Some rules when cleaning:

Go inside the building to be very fast, do not stop in the middle of rooms and staircases.
In the room or around the bend to enter only after throwing grenades, but even then there is no harm to shoot a particularly suspicious of the room, especially furniture.

Peek out from behind corners need as close to the floor level. It should follow, to machine the barrel, ammunition or other parts of the body popped out first, and thus were not warned of the enemy.
Dark corners and hallways checking machine gun.
Metaya up grenade, should calculate option, that it can bounce off any obstacles, and return to its owner.

It is not light in window openings, otherwise you can get shot by both entrenched in a nearby enemy building, and from their own group cover.
When driving pairs or triples in any case should not be allowed, that the enemy wedged between fighters. In this case, the enemy is able to freely open fire, and members of the group at risk to shoot each other.

Fire on the enemy should be opened only when visual contact. At the sound of shooting is prohibited, otherwise attackers can strike their comrades, entered the building with another entrance.
Inside the building, it must be remembered about Ricochet, both from their bullets, and enemy fire.

The above rules are a minimum set of knowledge, to be learned soldier. However, the sweep of the building is a complex operational activities and requires serious special training, whose army units have not. It can be gleaned only from special teaching materials for SWAT and special forces of the FSB fighters.