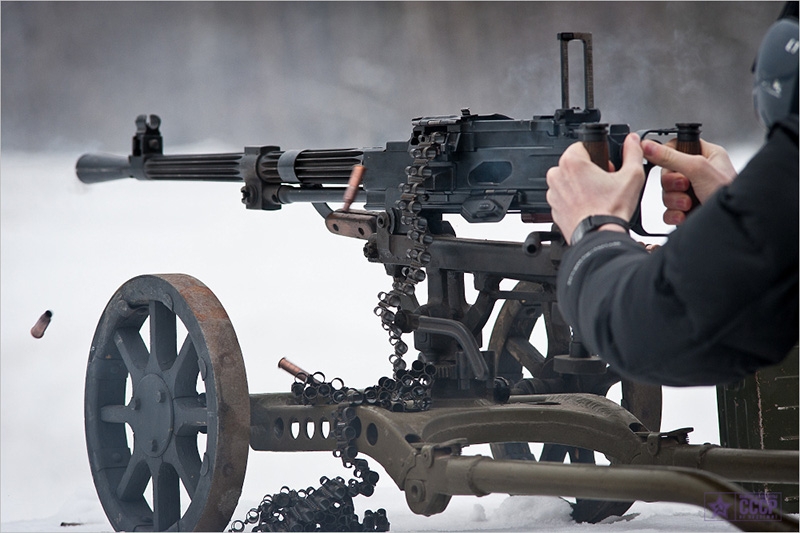 After the defeat of the Nazis near Moscow with new urgency the question arose about the machine gun lightweight type. Maxim gun went reliably serve our army through the power and accuracy of fire. but, indispensable in defensive battles, in the offensive have suffered heavy weight machine gun. Affects the, it is not always at hand water, required for cooling the barrel. In one of the reviews pointed to the front: "According to its weight (70 kg) maxim gun design is unsatisfactory, reduces maneuverability parts… Previous military units for use in machine guns War II showed, that heavy machine guns weighing over 40 kilograms in offensive operations are heavy and do not meet the conditions of mobile warfare…». 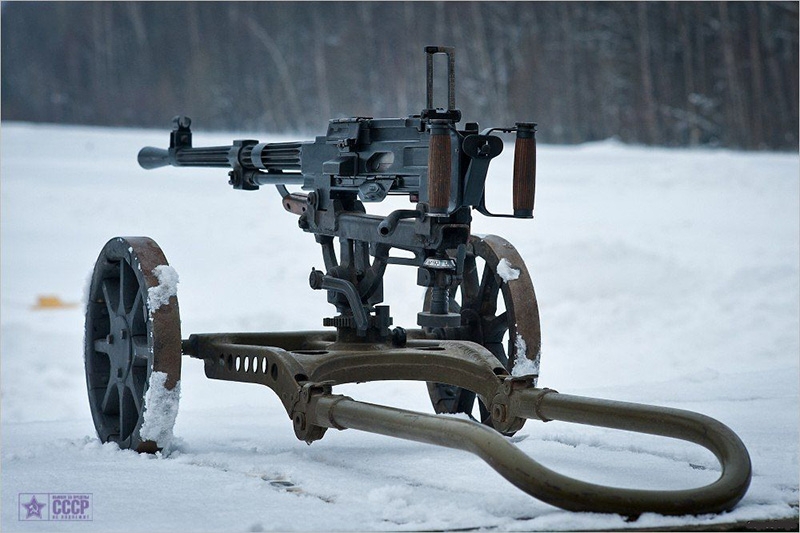 In May 1942 , in accordance with the decree of the USSR People's Commissar weapons D. F. Ustinov was announced a competition to develop a new design for the heavy machine guns of the Red Army (Replacement machinegun maxim obr.1910 / 30 g)

After the war in. A. Degtyarev recalled: Statement said one more designer, hitherto unknown. They had Peter Maksimovich Goryunov, worked at the Kovrov plant. He was not young, He worked with us for fifteen years, He had a reputation for amazing master, but he never showed himself not as an inventor, nor as a designer. And suddenly one day at dawn Goryunov is up to me with a large parcel. It was the summer 1942 of the year. - Vasily, look at the model of my gun. Many times going to you, but somehow ashamed. I looked at the model and Goryunova, I confess, I could not believe my eyes. The model has been designed with the latest achievements of the armory automation. - When did you do it, Maksimych? - I asked. - Conceived for a long time, a model picked recently, when I heard, that the task of creating a new machine gun placed in front of us. 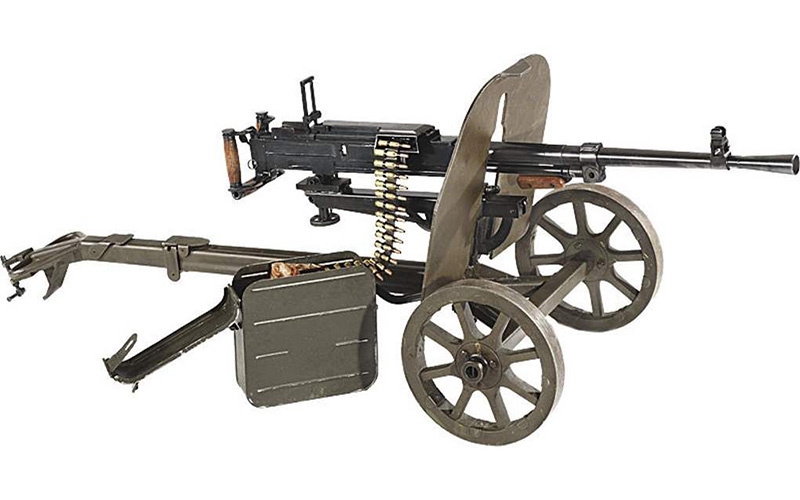 Proposed for the competition experienced gun, developed at the Kovrov Mechanical Plant gunsmith P. M. Goryunov with M. M. Goryunova and B. E. Voronkov, He has been transferred to the test at the end of 1942 of the year. In May 1943 year results of field trials were announced, the results of which Goryunova gun won the competition heavy machine guns.

15 May 1943 year under the name SG-43 machine gun was adopted by the Red Army. Enter the army SU-43 began in June 1943 of the year. AT 1944 by designers G. Garanin and V. Seleznev designed for SG-43 simplified wheel lathe, It characterizes much higher rates when operating conditions in labored.

AT 1945 year he improved gun. To improve heat transfer trunk instead smooth outer surface received transverse edges, handle reloading for the convenience of shooting from a prone position and sitting moved out of the fire control handles on the right side of the receiver, introduced an adjustable contactor trunk, allowed virtually unhindered replacement of the heated barrel. 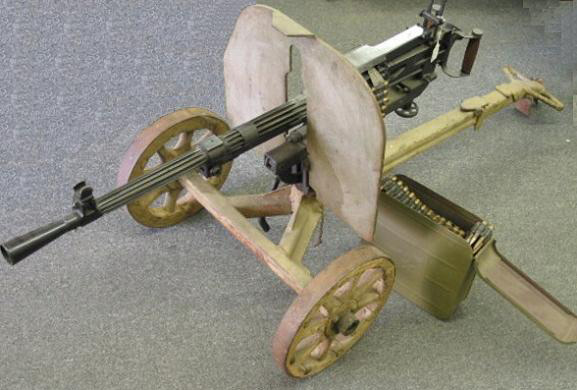 Generally, It was manufactured and delivered to the army before the end of the Great Patriotic War over 80 thousand. SG-43. Shortly after the end of World War II machine gun again underwent modernization. Re-equipment of the Soviet Army with machine guns Goryunov was completed in the late 1940s – the early 1950s.

Goryunov rm. died 23 December 1943 of the year, returning from Moscow, where I debug their guns before being sent to the front. 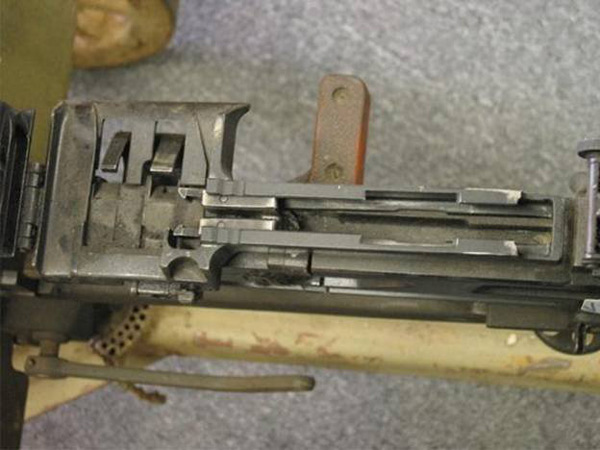 View of the receiver of SGM top, the lid is opened; see the seizure, Remove the cartridge from the tape and charging handle.

Bullet retains its lethal effect on the entire range of flight (to 3800 m). Muzzle energy bullets with steel core - 3511 J., bullet sample 1930 of the year - 3776 J.. Combat rate of 250-300 rounds per minute. Cooling of the barrel - air. Maintaining an intense fire bursts possible to 500 shots, then it is necessary to replace or cool the barrel.

– All four holes fit in a circle with a diameter 15 cm;
– middle point deviates from entering the control points are not more than 5 cm in any direction.

– at least eight of the ten holes fit in a circle with a diameter 20 cm;
– middle point deviates from entering the control points are not more than 5 cm in any direction.

Checking the firing battle is performed on the check target (cut to fourth horizontal line) or black rectangle height 30 cm and a width 20 cm, fortified white panel height 1 m and width 1 m. Firing range - 100 m, cartridges - with an ordinary bullet (with a steel core or a light sample 1908 of the year), sight - 3 (on a scale of "A"). 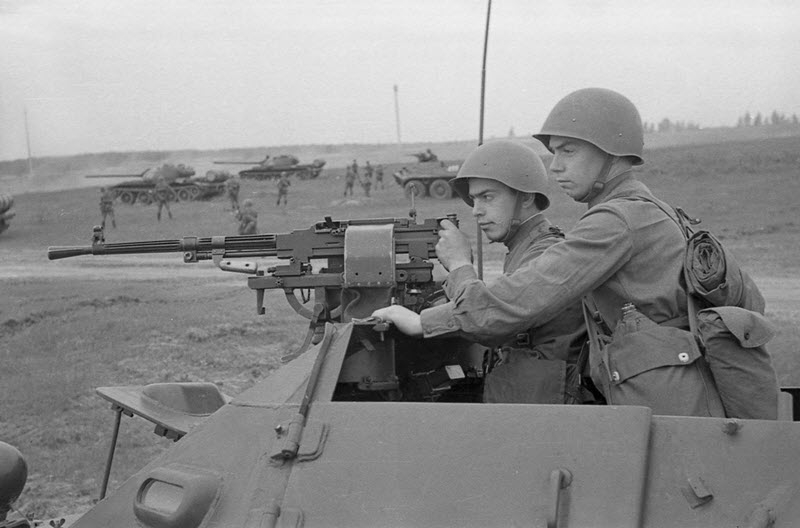 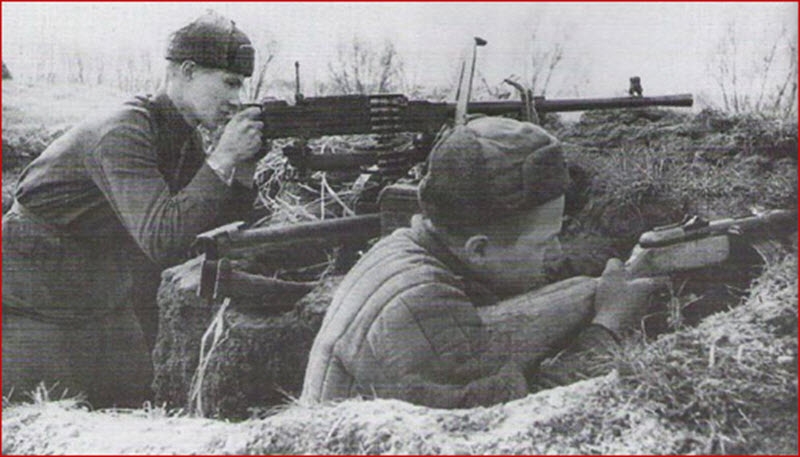 SGMB - bronetransportorny, mounted on the front, side or rear bracket Armored.

SGMT - Tank, installed inside the turret guns on the bracket cradle, It has electric trigger. 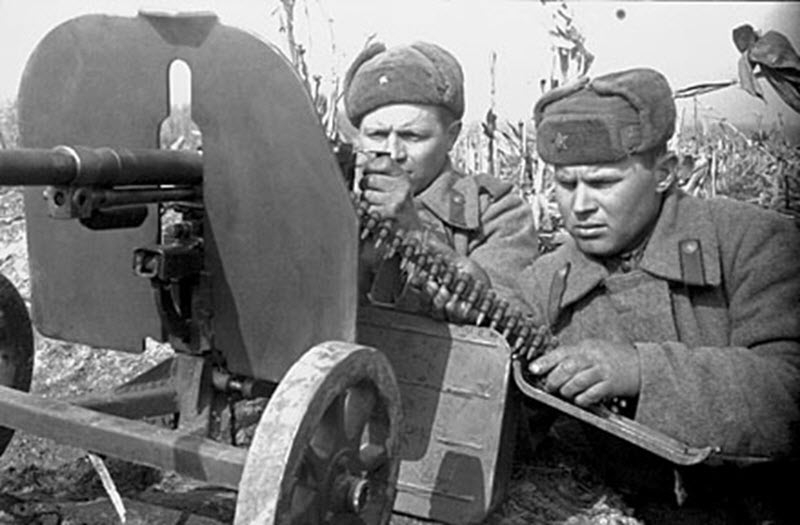 SGMT gun equipped with electric trigger in an enclosure on the back plate. 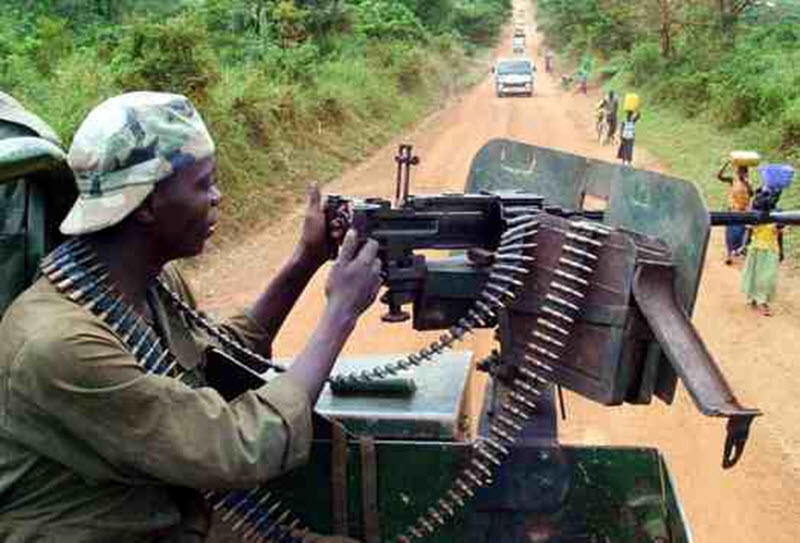 Goryunova gun sighting device consists of a front sight and sight, in turn consisting of sight base, sighting frame with spring clamp and a whole. On the walls of the sighting frame marked division with numbers: sample light bullets 1908 of the year, bullets with steel core and special bullets - on the right side (letter "L" and the digits 0 to 20, indicating the range of hundreds of meters), sample heavy bullets 1930 the year - on the left side (letter "T" and the digits 0 to 23). On the pillar bearing risk, and on the back side of the clamp for dividing applied lateral amendments (five divisions of left and right of the main risks) to set the rear sight. Each division is equal to one thousandth of the rear sight range.

For firing at air targets at a machine gun mounted anti-aircraft sight of aspect, designed for firing at air targets, We are moving at a speed of 600 km / h at ranges up to 1000 m. This sight comprises a sight base, front and rear divisors. Front visor consists of concentric rings (with radii 20, 40, 60 and 80 mm) to select the pre-emption, central ring for adjustment of the front sight and the rack reticle. The rear sight is made up of a ball, locking screw (to reconcile the sight) and stands refers zadnego. 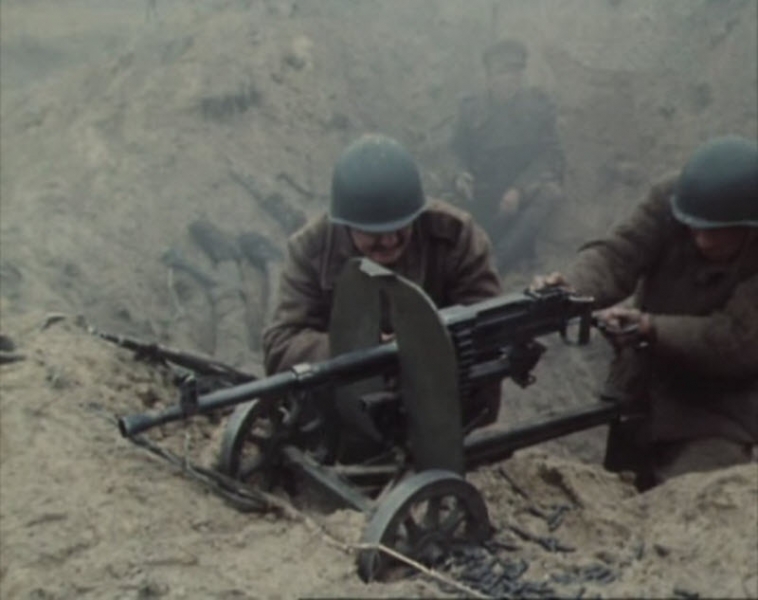 The principle of operation of automation

Operation The SH-43 is based on the energy of powder gases, moved from the bore. The barrel is locked by tilting the right shutter. When fired portion of propellant gases, ejecting bullet, is directed through the opening in the barrel wall in the gas chamber and presses on the piston, from which the bolt carrier begins to retract. The shutter remains in place until the departure of the bullet bore, closing it and preventing gas breakthrough into the receiver.

After the departure of the bullet moving parts continue to retreat, thereby compressing the back-mainspring. The shutter opens the bore and remove the sleeve from the chamber. Engine extracts the next cartridge from the tape and feeds it into the longitudinal slot of the receiver. The sleeve is ejected from the receiver, submits slide the cartridge into the receiving window of the receiver.

If the trigger remains pressed, the gate frame with the shutter under the action of reciprocating mainspring rushes forward, without stopping in the rear position. Shutter pushes a cartridge from the longitudinal window of the receiver and shall be sent it into the chamber. When moving parts occupy the extreme position, the shutter closes the bore. The striker smashes the capsule holder, there is a shot, and automatic operation is repeated. 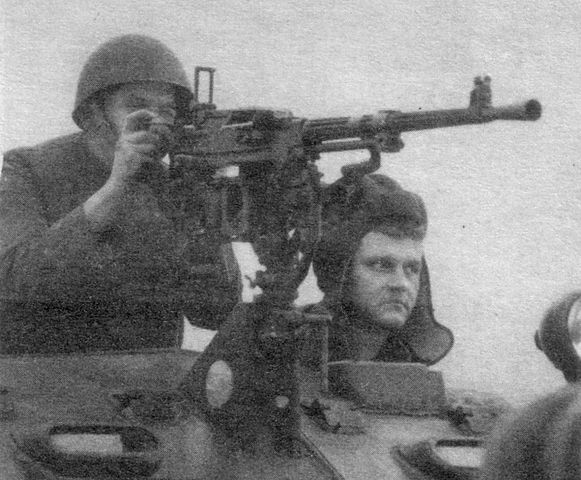 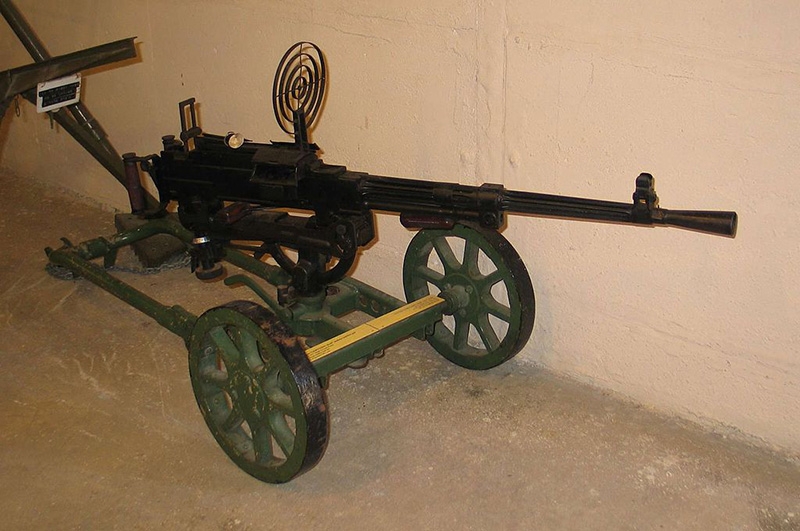 The performance characteristics of the SG-43 machine gun 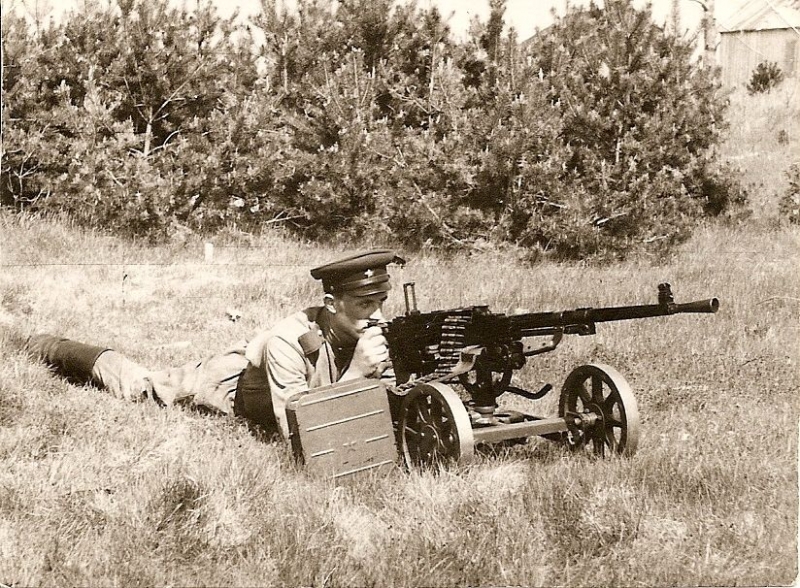 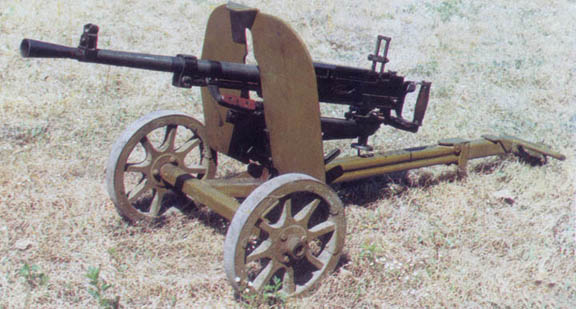 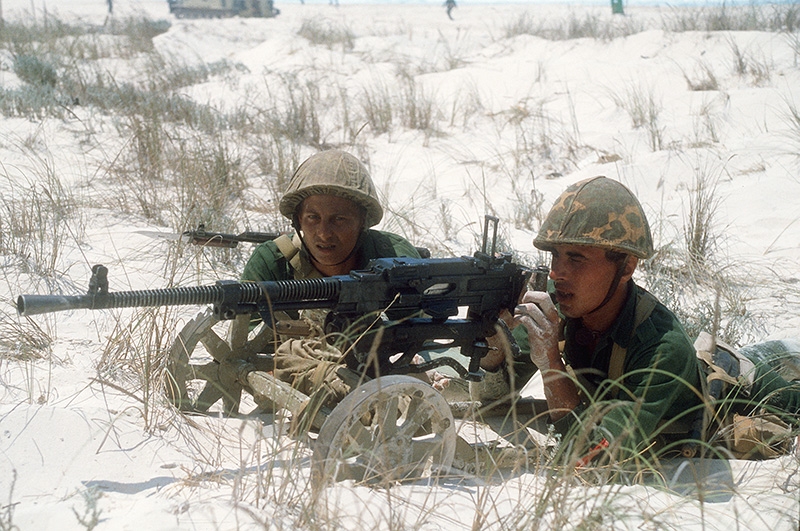