The main requirement for training can be called, to be as realistic as possible. Below are some key points, used in organizing and conducting training.

despite, that training in several fields is very important, Snipers should have enough time for training classes in their specialty;

do not forget to withdraw snipers in accordance with their specific nature in the course of tactical training (management observation, fire support, etc.);

The practice of conducting studies on the evacuation of wounded officer, for action at a meeting with the enemy and to storm the building in conjunction with firing of snipers; in real life, you may run into similar situations and apply at the same technique, you had never practiced – not the best option.

Practice exercises on the development of visual memory; embodiments of such exercises are monitored for some time a certain number of objects and their subsequent recovery from memory on paper, as well as the commander of the staff survey division of the distinctive qualities of the key objects and local objects, unit encountered in the course of the school day.

The following exercise helps to develop hand-eye coordination and helps the eyes “see faster”; in the course of this exercise, there are two balls (or other suitable object), painted in different colors. One color corresponds to the left hand, other – right. Balls are placed in a container and one catch learner. Last to catch a ball corresponding hand. With the acquisition of experience and the rate of speed of the ball increases.

The practice of conducting classes in camouflage and covert movement under surveillance. This also applies to urban units.

conducts classes to collect information through observation. In this case, assign an enemy and make a plan of his actions. This is a good test of the sniper's ability to notice the key points during the monitoring. Requires him to report on the radio parts, of relevant.

during the course, use the situation, in which there is a threat to the lives of the hostages or the employees and by a sniper is required to decide whether or not to shoot. Evaluate his reaction during the summing up the results of a class.

strive to, to study time it was used for teaching marksmanship, registration results, and to work out ways to travel, items of equipment and tactical actions. Remember, that the main for the sniper is the ability to use their weapons effectively. Weapons must meet the requirements and the sniper must be able to shoot straight out of it. insufficient attention, given to this, causes, sniper becomes professional in incorrect performance of a reception. After, sniper satisfactorily learned to use arms, you must move to the shooting from different positions, after loads, in a limited time and under the influence of other stresses, that may be encountered in the real world.

check with a coin correctly pressing the trigger sniper, placed on the trunk and blank shot; after the shot coin should remain on the trunk. Very useful is the patron of the store equipment training during shooting. This technique can also be used for training activities during the event of delays.

conducts classes with sniper teams of other divisions, with which there is an agreement on mutual support. During lengthy operations, especially during the cold season, snipers have to change. If the situation arises, very important, to the new shift snipers knew the situation(distances cards, surveillance journal, coaching, etc.) and I was able to carry out the replacement of smoother.

during the nomination to the object correctly apply the methods and techniques of movement (Using sheltered from the fire routes and fire support).

Note: Using a sports air rifle can greatly enhance the professional level of a sniper. They can be used in almost any situation and make it possible to significantly reduce the consumption of ammunition. target, used for shooting, must be reduced to the size of, corresponding to distances. 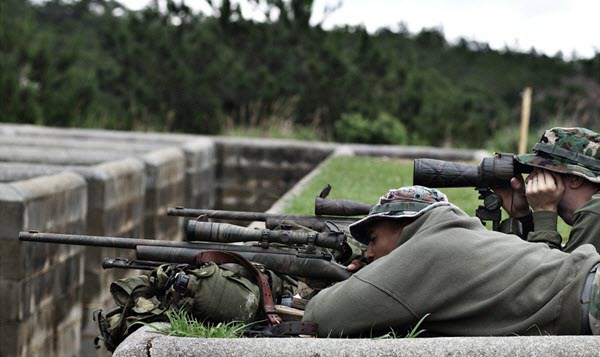