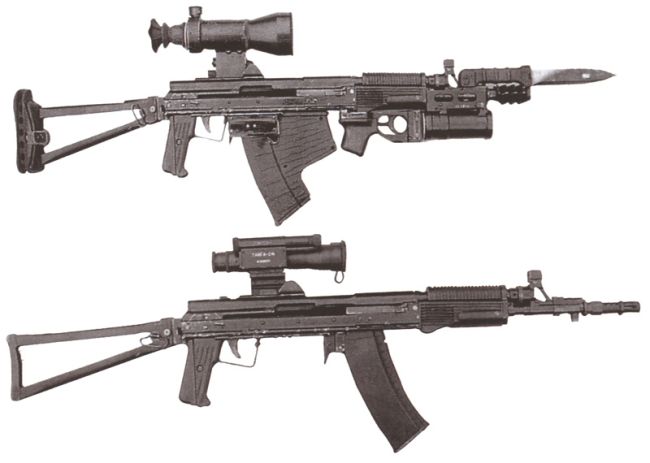 AFM-DT "Sea Lion" was a further development of APS underwater machine. Created in the 70s APS had a number of shortcomings, one of the main fire is limited capacity on the ground, since the effective range can be up to 30 m. In the late 90-ies of the staff of the Tula Design and Design Technology Institute of Mechanical Engineering (TPKTİMaş), under the guidance of Doctor of Technical Sciences Yuri Osipov Danilov developed a unique amphibian (two-media) automatic AFM-DT.

The main unique feature of AFM-DT compared with APS, it is possible to use cartridges and shop from regular AK-74.

Under water "Sea Lion" uses ammunition similar to the cartridges to the APS machine (patron vehicles and MPST), but differs from them in diameter bullets (needles).

At landfall, as it has been written using ammunition from AK-74.

The main difference between the AFM JT APS - 5.45mm caliber rifled barrel, with rifling step the order 150 – 200 millimeters, and the depth of grooves of the order 1.5 – 2% from the trunk diameter (0,008 – 0,011 mm). Such rifling allow satisfactorily stabilize the bullet staffing automata cartridge 5.45h39mm. Bullets underwater cartridges have an actual diameter of 5.45mm (Unlike bullet cartridges MEA, having a diameter of 5.66mm), which allows them to pass through the barrel, without bumping into the rifling, followed by stabilization in the water by means of the cavitation cavity, generated when a bullet moving in the water. Underwater cartridges are built on the basis of the standard casings from bullets 5.45h39mm, allowing them to shoot from the same barrel, that of conventional ammunition 5.45mm.

To ensure food machine cartridges of different types and sizes (the total length of submarine patron of more than 2 times the length of 5,45mm cartridge 7N6) are two types of shops. box magazine from the MTA machine capacity used for underwater shooting 26 rounds, and firing in the air - shops from AK-74 capacity 30 rounds. For mounting in the machine shops of different length latch AFM-DT is made mobile shop, and can be moved in the slot receiver box stores back and forth. Fixed in the rear position, This latch allows you to put in the slot long 'underwater' shops, and in the front - the shorter shops from AK-74. To protect the mechanisms of weapons of dust and dirt in the receiver window design shops provided laterally hinged cover. When the latch is shifted back, in the 'underwater' position, the lid is in the open position, and the translation latch in the front, 'Ground' situation, spring-loaded cover automatically closes the back, the unused portion of the receiver box stores.

The problem of removing water from a small-caliber barrel at the transition from the aqueous environment in the air at regular shooting 5.45 mm ammunition is solved by diverting a small portion of the propellant gases from the chamber into the barrel forward, in front of a bullet, through special channels, made in the walls of the chamber and the bullet entry, so that the water is simply blown out of the trunk before, it may become a hindrance when driving the bullet down the barrel.

Adopt automatic was not adopted, but was the basis for the development of more promising AFM machine.