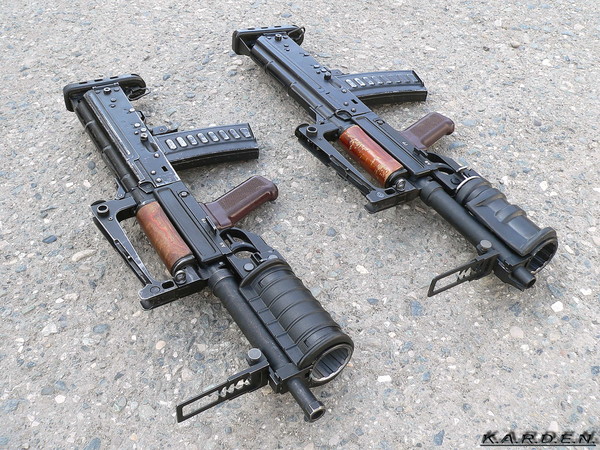 When creating this model were taken AKS-74U and grenade launcher GP-25 "Fire", design was unified 75%. From ammunition were selected 9mm bullets SP-5 (7N8 index), SP-6 (7H9) and 40 mm shrapnel shots VOG-25 and VOG-25P. Complex under these munitions has received full designation OTs-14-4A or "Groza-4". Cartridges combine low impact with heavy resistance on the trajectory of the bullet and its relatively high penetrative action. 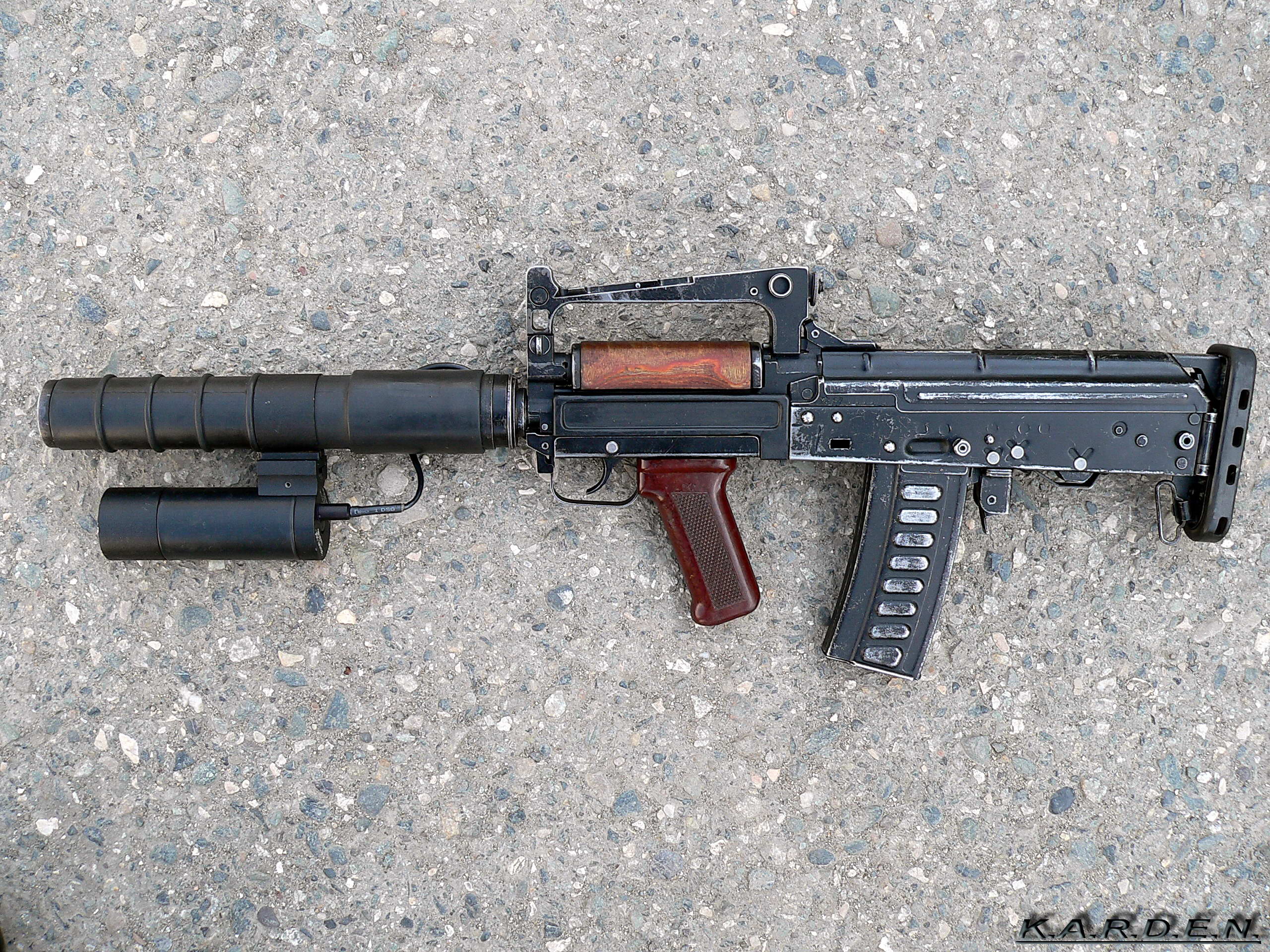 Automatic retained overall device AKS-74U, but arranged in a "bullpup". This will reduce the overall length of the weapon, reduce it jump by the action of the recoil, and in the presence of grenade, to achieve a balance with the location of the center of gravity in the region of weapons of pistol grip. Automated Driving, the barrel lock, operation shock trigger unchanged. Modified scheme vent, because of smaller pressure propellant gases in the barrel gas escape hole channel assigned back and connected with the gas chamber special tube. Lifting the butt lift made sight and a front sight and mount them on a special bridge, serving as a handle for carrying. Sector sight drum is provided with an adjustment. On the faces of the drum are plotted in the range 50, 100, 150 and 200 m. Grivko sight replaced vertical plate with a slot. When you turn the drive on 180 degrees to place the slit opening rises diopter: with good lighting diopter sight easier to, especially as the OC-14 closer to the eye sight arrow, than a Kalashnikov rifle usual scheme. Adjustable fly with guardrail is mounted in front of the bridge. Assembling sighting devices on the bridge-arm releases the muzzle of the barrel. A bridge is also used for the installation of a optical sights and night. 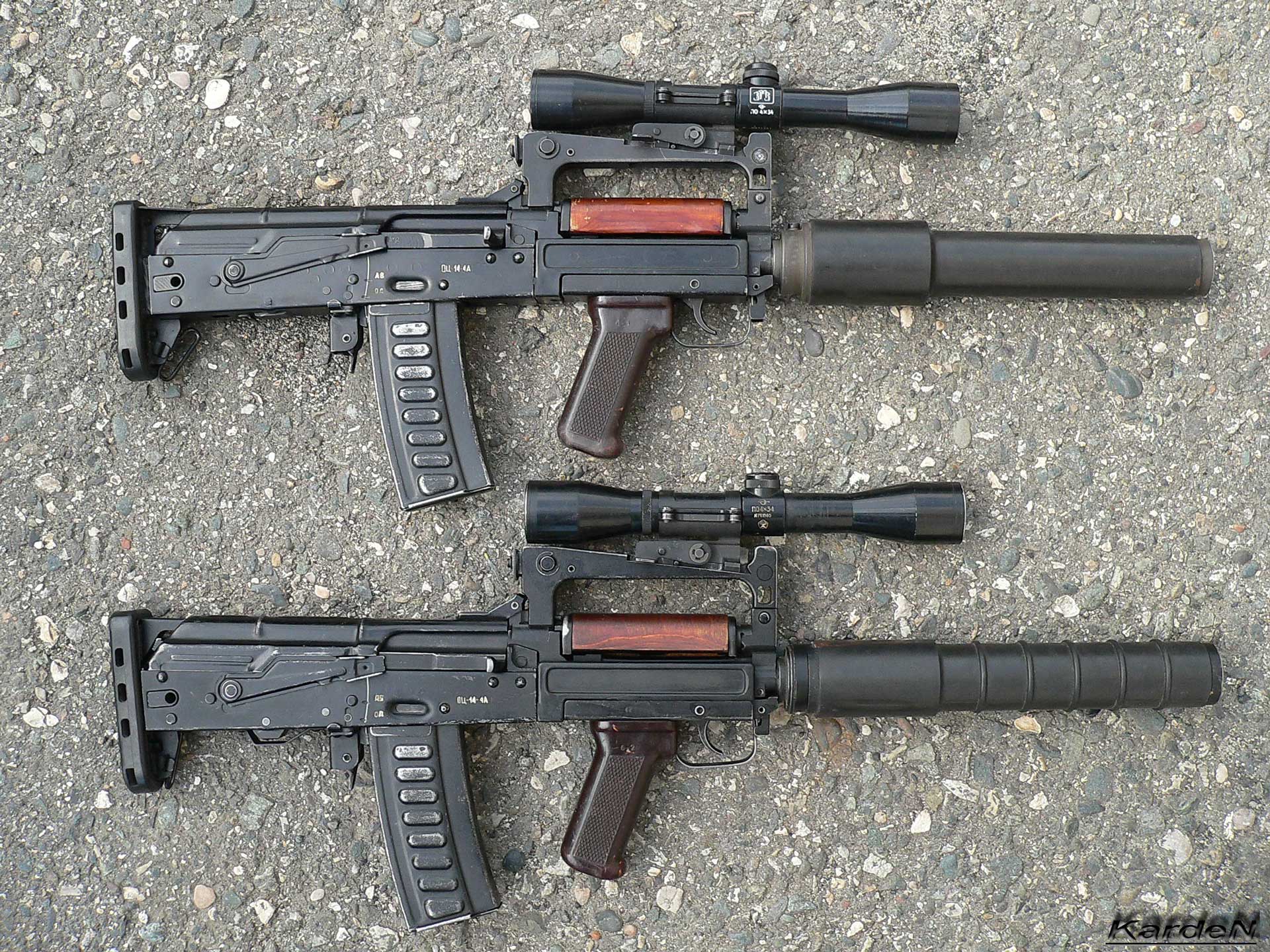 Folding stock AKS-74U replaced butt pad with rubber shock absorber and hinged to the receiver. Top back plate has a tooth, rests on the cover of the receiver and plays a dual role. It smooths the upper bound of the machine, preventing it from clinging to the items of equipment, hatch edge, etc., and holds the receiver cover from failure to recoil when fired from a grenade launcher.

Pistol grip and descent weapons used to control and automatically, and Grenade. The trigger pull is associated with shock trigger a grenade launcher and a pusher, to trigger automatic traction. Switching descent produced a flag, turn off the traction or pusher. Use of such a switch in a stressful situation demands high combat readiness arrow. Since grenade made self-cocking trigger, DA mode in the machine and not provided, a special device reduces trigger pull mode "automatic". For firing a grenade launcher sight is a framework with scales for hinged and grass fire. When the flatness of the shooting machine used by fly, when the curtain, male on nadulʹnike. Range of fire from a grenade launcher to 400 m. Grenade casing serves fore all weapons. On the back plate and receiver automaton reinforced sling attachment.

A further embodiment of the OC-14-4A is automatic assault. Shot grenade launcher and muzzle, Module pistol grip with a trigger replaced by another - with one pusher, put another muzzle with plastic handle. Foregrip improves accuracy with hands, without apposition. simple sleeve can be mounted to the handle instead of the muzzle, it turns the most compact version of the assault machine.

The fourth option is a special assault machine. Instead, set the muzzle silencer unit (PBS), reduces the level of sound of a shot to 118 db. In contrast to the PBS-1 there is no solid rubber washer, and the pool does not have to waste energy on breaking down barriers. Braking occurs leading propellant gases due to their own turbulence. BSS coated rubber casing, also serving fore arms. reduce the level
promotes sound subsonic muzzle velocity. 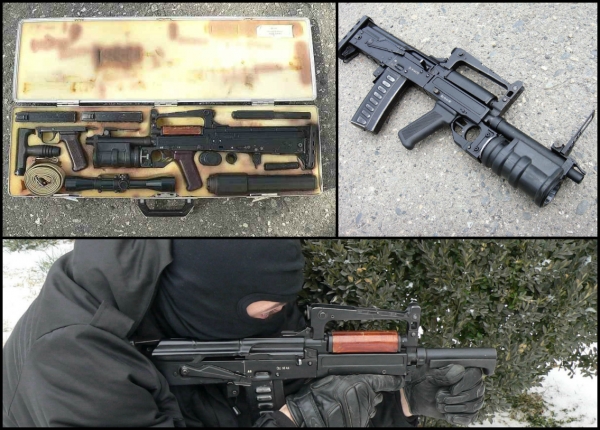 Assembling all embodiments carried out by the user depending on the application. OTs-14-4A comes in a special assembly in the form of a suitcase with foam lining, whose nests laid assault weapon, interchangeable modules, oiler and affiliation.

Developed and modification of the OC-14 for armed forces, since the SP-5 and SP-6 are created on the base of the sleeve, the cartridge obr.1943, OTs-14 is relatively simple redesigns for this cartridge. canvas closed cover is designed for wearing army modification complex. 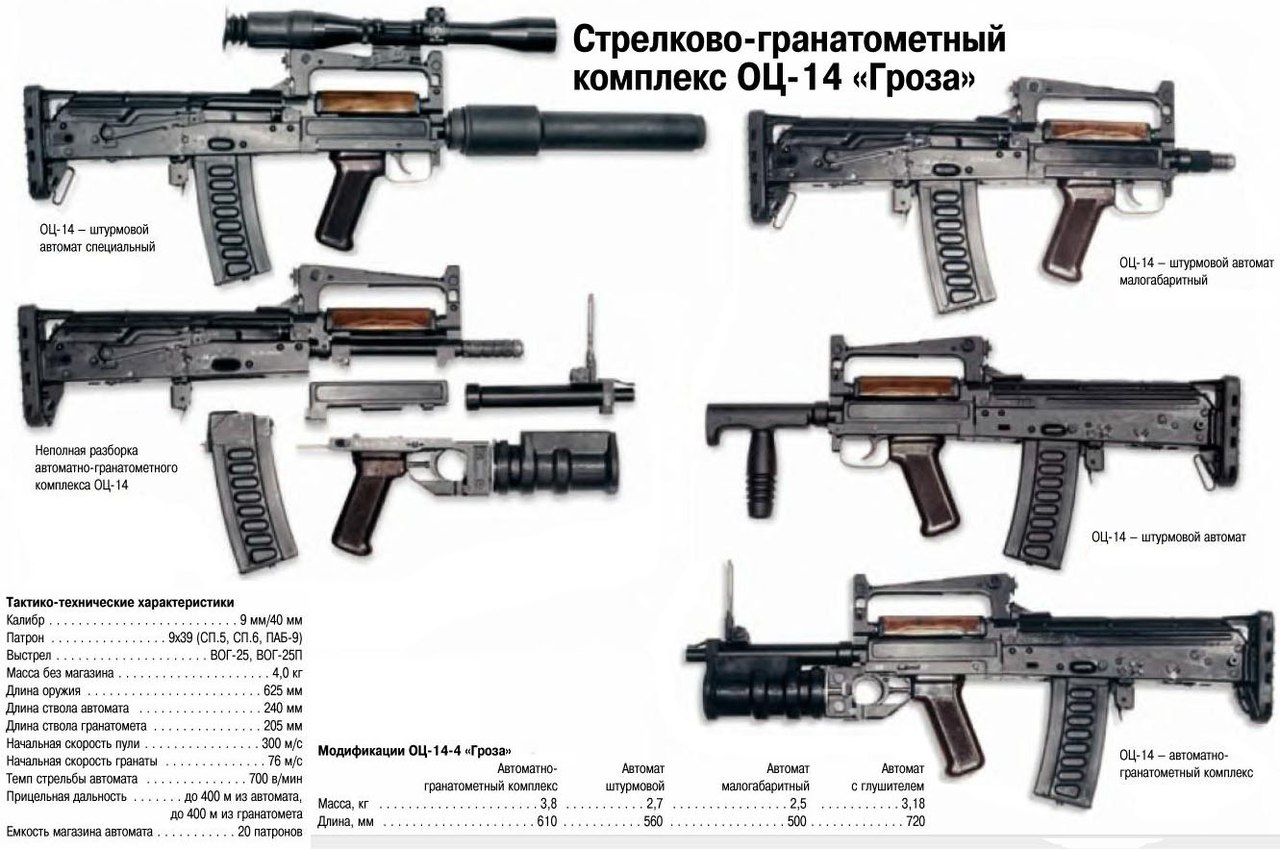