In the 1970s,, following the NATO countries, The USSR took the path of transfer of small arms on maloimpulsnogo cartridges with reduced-caliber bullets to facilitate wearable ammunition (for 8 stores caliber cartridge 5,45 mm gives a weight saving of 1,4 kg) and reduce, it was thought, "Excess" capacity 7.62-mm cartridge. AT 1974 he was adopted by a complex of weapons chambered for 5.45 × 39 mm, consisting of AK-74 and RPK machine gun 74, and later (1979 year) complemented by small-sized AKS-74U, designed for use in niche, in which Western armies occupied submachine guns, and in recent years - the so-called PDW.

The main differences from its predecessor

At issue machines 1974-1986's butt and handguard are made of wood. FROM 1986 year they began to produce of black plastic. On the wooden butts on both sides of the longitudinal grooves have been made to facilitate the total weight of the machine. They continue to do, and on the plastic butt.

According to the single ground and air targets - 500 m; 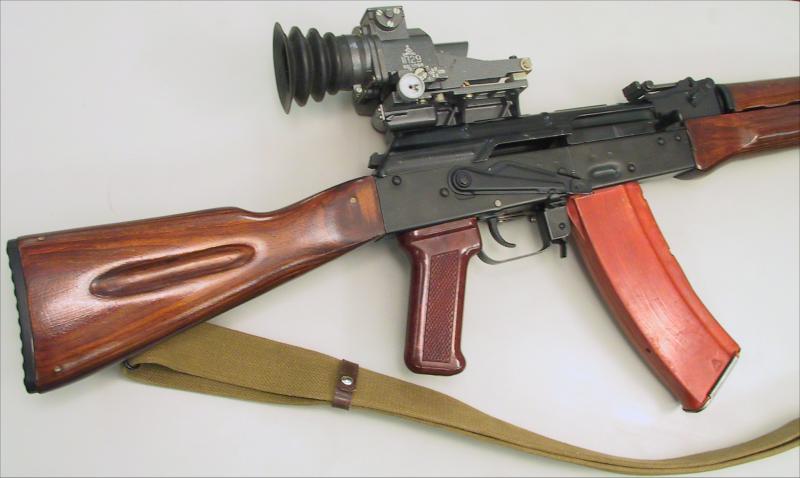 Checking the firing battle is performed on the check target single or black rectangle height 35 cm and a width 25 cm, fortified white panel height 1 m and width 0,5 m. Firing range - 100 m, position - lying with the stop, without the bayonet-knife, cartridges - with an ordinary bullet, sight - 3.

Generally, one can note a significant improvement in the accuracy of fire in relation to the AKM and the more AK. As an example, consider the total mean deviation in the range 800 m (vertical and width directions, respectively,):

Variants of the Kalashnikov assault rifle

File-74 (GRAU index - 6P21) - AK74 embodiment with a folding metal stock laterally triangular shaped. Designed for use in airborne troops (Machine with non-folding butt can not be conveniently and safely positioned in the harness of the parachute system).

AK-74N - "night" version of the AK-74 with a side bar for mounting night sights.

AKS-74N - "night" version of the folding AKS-74, with a side bar for mounting night sights. 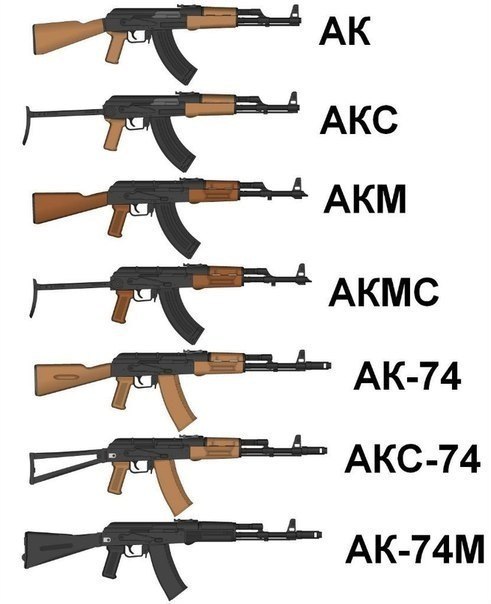 The bullet from a steel core 5.45 mm cartridge is fired from AK74 breakdown provides the following effect[Source Unknown 1165 days]:

The penetration of 20-25 cm in the earthen barrier of compacted loam soil at a distance 400 m;

AT 1986 year, the new bullets with termouprochnonnym core high hardness have been developed, providing a significant increase in the breakdown of the: A new bullet pierces a steel helmet at a distance 960 m, a bulletproof vest with titanium plates - at a distance 200 m.

High reliability in harsh conditions. Simplicity and low cost in production. In an embodiment of the AK-74M - Support for the installation of modern tactical and sighting devices, that is essentially a way of upgrading the machine, and support for double-row box magazines of similar Steyr AUG, made of impact-resistant plastic, the side gusset of a transparent polymer, for visual inspection of the amount of ammunition in store.

Since one of the reasons for the AK-74 has been changed caliber gun used cartridge, to 7,62 × 39 mm to 5,45 × 39 mm, Weapon has less recoil and a correspondingly greater shooting accuracy, a flat trajectory of a bullet.

In comparison with US carbine M4A1, AK-74 has a lower accuracy by a single fire.

The rest of the advantages and disadvantages are similar to those for the whole family AK.

Technical characteristics of the AK-74

Technical characteristics of the AKS-74