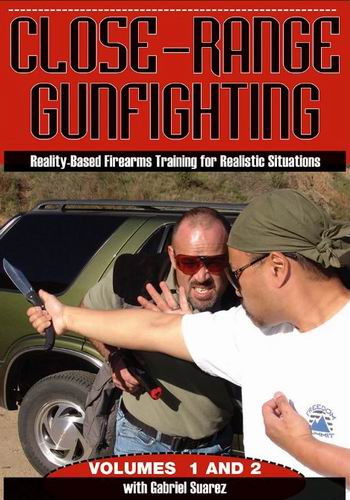 Gabriel Suarez – the most respected and recognized instructor in marksmanship America. Man with a huge combat experience behind, Gabriel is one of the people, which form the armory culture of America and create principles and methods of civil defense and the use of weapons. His authority is indisputable, because all, what he does is justified and confirmed hundreds of cases of armed conflict and decades of police practices.

In this two-part videotutorial, tells how, how to use the weapon in a real fight. Few people are often faced with situations, but everyone should be prepared for them. Gabriel Suarez seized a huge number of questions, facing armed citizen in the fire contact situation. Suarez has consistently emphasized the importance of such components as the distance battlefield, shelter, mobility, balance. He was one of the first, who appreciated and conveyed to his students the value of the environment battle, his space. He is the best of its kind. He teaches shooting on the move, snatching the weapon at his concealed carry, techniques spid-term (shooting at a distance of battle "in focus"), shooting at moving targets, shooting multiple attackers, change weapon, changing the contact distance. Stands, retention and movement are represented in battle "street" version. Are a lot of exercises for training actions, including the "dueling".

Particular attention is paid to safety in the handling of weapons.
The information is provided in such a way, that with proper training and practice, you may well become a specialist and this knowledge may one day save your life.

Gabriel Suarezshootout in melee
Comments
Subscribe
news
interesting
Analytics Gold embargo: the collapse of commodity exports or a unique chance for Russia?
Analytics Convulsions of the spectacle and spasms of fantasies
Analytics Greenhouse horror story is buried
Subscribe to Newsletter