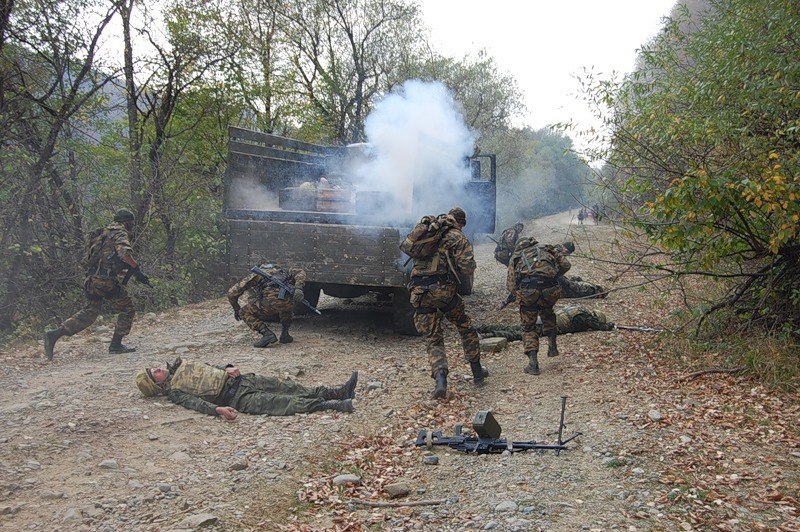 Evgeny Kulik
Usually, irregulars avoid open battle with the superior forces of the enemy – it is detrimental to them. Therefore, it is increasingly becoming an ambush for them, the main type of tactics of warfare.
In such a war, one of the main principles:”bit, ran away”.
When well-organized ambush fire attack with a maximum defeat the enemy only lasts 10 – 15 seconds, until the enemy came to his senses and started not to resist. After that the main task of attackers – instantly disappear.
departing, they confuse traces, mining the escape routes and ambush, luring the enemy into a trap. Therefore, the pursuit of the attackers – madness.
ambush – This insidious method of warfare, and to protect yourself from it is extremely difficult, but something can be done.

God saves man, who save himself, or what to do, to guard against ambushes?

Marsh organizes reconnaissance commander. He makes a decision based on the assessment district. Prior to nomination roan first need to develop a route map based on terrain, state and group opportunities, and the timing of the task.
Evaluating the enemy, The team leader is required to clarify, what his forces are in the band intended march. It is also necessary to take into account the proximity of settlements, from which the enemy can act.

On the basis of this information, the group commander outlines route, suitable in terms of security against possible attacks, identifies areas, which is most likely to encounter with the enemy, and take measures to reduce this probability.
For routing takes into account the orientation of the commander. For this, he outlines on the route guidance, which are clearly visible at night, defines azimuth orientation and spacing.

It should not be a route through large forest areas unless absolutely necessary, because it is difficult to navigate in the woods, especially at night. It is better to plan the route near the clear guidelines: outer wood, bank of the river, and so forth, if they coincide with the direction of travel. In mountainous terrain it is necessary to choose a route along the ridges, Avoid narrow gorges and enclosed spaces.
The city is preferable to move along the streets, and if possible, through neighborhoods. This rule applies when driving not only in large settlements, but also in small villages, PGT – especially in the private sector.

Keep in mind before going to battle”
In organizing the march, the commander should check the fit equipment, arms, Why jump command is given before and after the nomination halts.
Particular attention should be paid to the load equipment fighters and ammunition.
It is no secret to anyone, that our army outfit, are in service in the armed forces, It leaves much to be desired. I do not just have to celebrate, that the fighter in full gear after a 10-kilometer march through the mountains sometimes loses its ability to respond adequately to the environmental situation.
Fatigue paralyzes attention. Therefore offload some of his subordinates as possible, who will observe; let the rest will be more loaded, Then they swap. Also unload Saving.
important factor – time-to-operation.
The best time of day for this – second half of the night. Use the severe weather conditions to enter the combat mission (rain, blizzard, morning fog). Come to the enemy as far as possible from the sun.

The enemy, too, man, and nothing human is alien to him, in which he also feels uncomfortable adverse weather conditions. Do not walk on the same route several times. If the enemy team will determine the route of movement – wait on the return path ambush. Suddenly change the direction of the route. confuse the enemy.

marching order
Neutral marching order consists of a nucleus and cruising. In cruising stands head patrol consisting of two or three scouts. Side and rear patrols are available depending on the circumstances. Composition escort determined group number.

The task includes escort: terrain reconnaissance and warning of the dangers of group. In the event of a collision with an opponent in the outposts charged with the task to pin down the enemy fire, to allow the kernel to maneuver, deployment in battle order and repel the attack. If necessary Saving provides cover band during the withdrawal.

The team leader should generally be in the core group head, driving patrols and the core, adjusting the rate of march.
In all cases, observers appointed by the signals patrols. Besides, observation arranged behind the front, rear and flanks group. Watch trailing or rear do not allow stretching of the column and individual soldiers backlog.

For communication with the patrol set a simple, but clear warning signals (usually – hand). Saving removed on visual communication distance and fire support.
During halts organized round defense (surveillance) and made a crew team in case of a sudden attack of the enemy.

When moving and halts should strive to leave no trace of your stay – empty packs of cigarettes, cans and other giveaway items group.

In the woods
you need to move along the edge, but not on its very edge, and in some depth, hiding behind bushes and trees. Avoid open terrain. Usually, the enemy is monitoring the outputs from the forest, for forest clearing, copses, fork in the road and trails When driving in mountainous terrain along the route group selected ranges, but not on top of them – so as not to be projected against the sky. In the mountains, usually, the enemy is monitoring passes, trails, roads, crossings through the mountain river, water sources (springs, waterfalls).
If you want to go on the bottom of the gorge, Watch the side extends along the slope, above groups nucleus. And the side patrol route in such cases only runs on one of the slopes. It is very important, since in the case group adversary finding raises the likelihood, escort on the side opposite slopes will strike each other. When you need to overcome the low-lying part of the group took up defensive positions on the ridge, covering Saving. Saving goes down and inspects the area, and then the slope, and then fixed on the neighboring crest. Only after completing these security measures tightened rest of the group.

The settlements
Exploration of the village should be started with a tour of it from a distance using the optical observation devices.

When viewed from the village to pay attention to the bushes, individual buildings, deep ravines on the outskirts, where the opponent can place the outposts, as well as on the roof, lofts, smokestacks, podiyemnyye crane, windows of tall buildings, where you can be monitored.
after inspection, moving from cover to cover, Group entrance in the village.
In the village of rural type, as well as in the private sector of the city need to move around the gardens and vegetable gardens. The town should not approach close to the buildings, go on sites, viewed from the windows.

Traffic in the city is carried out with a short interval in pairs or threes, which move at the same level on different sides of the street, covering each other.
Before overcoming the open terrain (the crossroads, streets, the space between the houses, houses arches) make sure no enemy. In such cases, you should slow down, from cover to inspect the area, windows adjacent buildings (basements) and… at a run, and only run!

on the march
The basic rule: observe strict discipline. Do not talk and do not shout. At night, do not use the light fixtures, Do not smoke. When using night vision devices tightly pressed against the eyepiece to eyes. Observe the established radio mode.
Teams fed only pre-established and understood by the personnel of the signals.
Withstand the distance between the military, avoid stretching the columns.
Command must periodically check for military group in the column, to avoid undue loss of their fighters.

I was ambushed by
In life, it is impossible to foresee all, and if all of you were ambushed, What to do?
Let every soldier will remember a few rules, that, may be, help him to survive in a difficult situation.

As soon as you heard the shots:
Bring on the ground, for shelter.
Collect into a fist, to Focus, quell the panic and fear.
Watch and listen. try to determine, where firing, ask detect enemy firing points. It is not necessary to see the bearded face thriller. The presence of the firing point may indicate the swaying branches of bushes, dust, elevated shot, themselves shot flash.

Listen commander Team.
“I do not see – I do not shoot”. it means, that we should not shoot out of fear all the ammunition in white light. Bring a clear aim fire in short bursts or single shots only on detected targets.
“Hold on to your”: do not lose sight of its three combat and the entire group.
Help someone. If you see, Comrade injured or someone from the group at a disadvantage, – cover it.

Often there are moments, when, especially neobstrelyannye, soldiers, start to rush or run somewhere is certain death.

Remember: the first to die fools and cowards.
These were ordinary soldiers personalized advice. Group should act in a complex.
Usually, enemy, located in ambush, opened fire on a small unit from a distance of up to 80 m.

Suddenly you hit a barrage of fire.
The basic rule:
Throw in the direction of the enemy, but not to the side and certainly not back – shoot in the back.

Turn in the order of battle.
Rapidly reduce the distance to the enemy – to throw a hand grenade.
To determine the place in the chain of the enemy with the most intense fire: across 10 – 15 seconds, it will need to reload – in this place and at this moment you break.
The group takes a desperate step: all concentrated firepower on this site, especially machine guns and assault rifles with grenade launchers.
The machine-gunners intense fire breaches in the enemy chain. Tommy with SE-25 hit the bushes in the same direction so, to grenades exploded over the heads of the enemy, allowing injurious.

The rest of the band starts to break followed throws his grenades into the breach, punched machine guns.
Sequence on tactical training necessary to work out to automaticity.
If you were injured or killed in a group, in combination with the above-described technique can be applied smoke bombs or smoke grenades. Smokescreen to help the injured and the dead and five of the ~ fire contact.

Saving takes place in the order of battle and carries a cover of the main forces group, ensuring their withdrawal. The core of the column takes away the dead and wounded, and under the guise of escort out of enemy fire stripes.

The commander should provide one or more collection points (as the main, and spare) in case of dismemberment of the group. If possible, undermining their way escape. For this purpose, efficient use of mines POM, MON.

survival in ambushambushwhat to do with the ambush
Comments
Subscribe
news
interesting
Analytics Westerners no longer trust their elites, – study