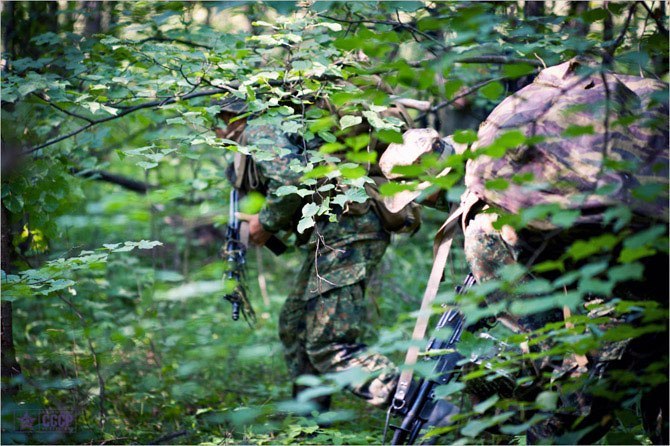 1. trace depth is greater than in the other side, where people went;
2. If you try to cheat, going backwards - look for a kind of "tottering" the distance between the tracks.
3. The direction of motion of man and machine can be determined as follows::
– liquid droplets sharp end point direction;
– lumps of mud leave trace rolling, directed in the direction of motion;
– tip "herringbone" tread on the machine must be directed towards, reverse the direction of travel.
4. Different distance between the tracks, unequal their depth, obstacle avoidance point to the wounded or sick
5. Deep mark indicates a heavy load.

6. Information on the determination of the following limitations:
– winter should be removed palm ceases to be scattered through 2 o'clock;
– summer without sun in a damp place keeps track of clarity 24 o'clock;
– summer sun keeps track of clarity 1,5 o'clock, across 12 hours cracks.
– fuzzy tread shoe, lumps of earth inside track talking about his limitations.
7. If you lose track, start to walk from the loss of an expanding spiral of space - so do dogs. On some of the turns you're sure to run into a trail.
8. animal behavior:
– sharply umolkshie frog point to the person;
– low flying ducks fly water;
– dramatically raise his head, tense legs, flared nostrils indicate a human beast.

Location troops on holiday give bonfires bred them (field kitchens smoke thicker and above the fires of smoke), cutting of trees, voices. Usually, German troops staged halts in sheltered places (dell, ravine, small forest, settlements, etc.). Horse on rest stops located close to water sources, mechanized troops - near good roads.
If a scout attacked the site of the former halt enemy troops, he must examine it carefully. Largest area of ​​trampled grass or trodden snow, in the number of fires, tetherposts, in the footsteps of motor vehicles and tanks can be determined branch of the, located on a halt, and its exemplary fighting strength, and in the wake of the horses, boot, machines - the direction of movement of the part. At the site you can find a halt cigarette butts, a pack of cigarettes out of, newspapers scraps, journals and personal letters, which it is not difficult to determine the ethnic composition of the, mood soldiers, etc.. Used bandages and bottles out of medicine in places halts indicate, that passed wounded column.
Cast in place halt property(outfit, equipment, armaments) It indicates a low moral level of the enemy and weakening in her discipline. abandoned cars, worn shoes, scraps of overcoats and other equipment, and in particular the arms, They are an indication of exhaustion troops, and, conversely, no halt in place of abandoned items of equipment, Uniform or arms indicates, that holidaymakers troops were in good condition.
– Signs of movement of troops
Transmission of forces especially can be seen on the trail, We stay on the road; The more bumpy road, the more troops passed through it. Traces, stay on the road, allow us to establish branch, approximate their composition, direction of movement and the passage of time. Traces of military wagons and artillery differ from traces of peasant carts, because they have a different width of the stroke and the wheel rim. Prescription transit or passage of troops given by the following freshness, but it is necessary to take into account weather conditions, affecting the safety of the track. It should be noted, that the determination of the passage of the troops in their footsteps is largely dependent on the roadway and its quality.
On a field road tanks, cars and motorcycles leave easily distinguishable marks. Determine the direction of their movement on the ground is easiest to medium density. The distance between the small halts can determine the approximate velocity of the enemy column per hour.
A column of infantry, even passed along the dusty road, reserves
a path. Their number corresponds to the number of rows in the column. A careful study of the following can set the national composition of the soldiers, for different nationalities have different army shoes.

During the summer, the trails, formed by the movement of infantry columns along the roads, most often to be found along roadsides and ditches; when dry, the movement of troops on dirt roads is determined by the dust. When infantry movement dust spreads over the road below and denser, than when moving cavalry. When driving parts dust mechanized rises especially high and the individual clubs.

When viewed at a large distance movement infantry represented as a slowly moving even, low line, artillery - in the form of a broken line; mechanized voysk- a rapidly moving dashed line.

In winter, part of the infantry moves on skis. Its direction can be set by the following features: the slope of the track from ski poles is always directed in the direction of motion; overtaking skiers, usually, bypass the column on the right side, thus some circuitous trails will be located right in the direction of the movement path.

On the march the troops are protected by head, lateral and rear detachments (outposts, patrols and aerial surveillance posts, warning and communication). Combat composition and removal defense from the main enemy forces can determine the strength and even the structure of the moving column. If there is an opportunity to observe the enemy's column, the length of it is easy to identify, and the length of the column can be determined and the number of.

Recognition of the enemy by their appearance on the battlefield

First of all it is necessary to evaluate the observed plot area from the point of view of the possibility of an enemy position NP and after this second search for it. Serve as places for NP can: mill, church, smokestacks, at home, stingrays heights, trees, bushes, PNI etc.
signs NP: visible or slit for observation loophole (they are particularly clearly visible on a white background winter); glitter glasses of observation instruments (the last feature you need to take care, as sometimes shine give fragments of ordinary glass, cans and even some stones), appearance periscopes or telescopes, telescope; the emergence of new bushes or other items, previously absent; masking change (replacement of faded green bushes and others.); single movement of people, etc..

For greater clarity - the following example.
In October 1942 g. on a section of the Western Front, our observer has noticed the appearance of crow on the bush. It would seem, the presence of a bird - a common phenomenon. But on the same day in the evening crow again appeared on the same bush. Observer set out to trace the, where fly Crow, and here in 10-15 minutes, she hid behind a bush. The next day was the same. There was no doubt: stuffed crow tucked in an optical instrument for observation. Soon held on this site reconnaissance in force confirmed the correctness of the observations of the existed behind a bush equipped NP enemy.

Command centers often located in the ravines, roschah, canyons and other terrain folds. Signs of command points are location:
– Movement on foot messengers, motorcyclists to command posts the locations of;
– shooting at our aircraft machine guns and anti-aircraft guns, cover up space command posts;
– no close command posts and artillery firing positions
mortars;
– location near the command posts landing sites.

Place wooden-firing points should be sought where, where possible good frontal and flanking fire, most often in the woods. Symptoms location such wooden-emplacements: while firing a machine gun from the point of fill timber is visible pulsing barely noticeable trickle of gray-white smoke; when firing long bursts - the sound is muffled, whereas with a machine gun, Located on an open fire position, he abruptly; bugorki, pointing to the ceiling and the embankment fill timber firing point, under such dimples appear dark spots embrasures; movement of people; wisp of smoke from the exit pipe, especially in winter.
On the square among the felled vegetation wooden-firing point to be found in the top of cutting angle .

Signs of seats firing positions of artillery and mortars

Places firing positions of artillery and mortars can be identified by the following external features: outbreaks of shots at a shallow depth, battery cover (particularly noticeable at night); by the sound of gunfire and shooting direction (at the sound of mortars deaf, and under closer observation visible flight min; Mina makes a sound when flying, resembling a howling); dust, climbing battery after firing and the dry soil; night mortar locations are determined by a fire lane when firing.

If ever there is something, threatening guerrilla - so it is trained dogs. They are able to smell the, which never saw a man. They can find a camp, disguised by all the rules. They are able to track down the group, gone from the place of diversion for tens of kilometers. they are incorruptible, fearless and do not lose their powers of observation.
If dogs allowed on your trail - remember:
– to rain or intense heat of the dog is working worse;
– wet weather without rain dogs improves performance;
– dog very badly sees, its main tool - nose, which
she trusts much more, eyes than. the, that looks, As a person, but man does not smell, the dog will not be accepted, as an enemy;
– "Cayenne mixture" - milled tobacco and red chilli pepper in
proportions 1:1 - in the processing of their track traces reliably prints dog down;
It should be mentioned as well on the human sense of smell. Of course, on this part of the person to the dog away. But still - if one takes the trouble to sniff, it will be able to smell a lot of interesting!
I, eg, I can easily determine the location, where he passed a smoker, even a few minutes after its passage. But this is nonsense, compared with the ability of some of my friends. I witnessed, they are at a distance 30-50 m (depending on weather conditions!) such staff told: "In front of people!"- and not just talking, and smell determined by the number and even called names!

The terms "nyuhachestva" are:
– the absence of even a light SINUS;
– rejection of all kinds of smoking;
– permanent residence in the countryside;
– training.

Believe me: in extreme conditions (let alone in war!..) people smell very strongly. By Southerners generally stink, both the beast.