On a sunny day to determine the points of the compass can be quite accurately by the shade of a – a linear object, eg, stick, Post or from himself. line, connecting the tip of the shadow of the mark, made within a short period of time, is about to indicate the direction to the east and west. Another way would require several hours of waiting, but it is more accurate. 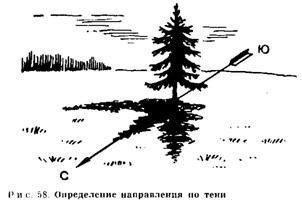 A quick way to.
*Insert the pole into the ground on a flat, free of vegetation site, which is clearly visible shadow. The staff does not have to stand upright. The slope of it to get the best shade (the size and direction) It does not affect the accuracy of this method.
*Mark the end of the shadow of a small peg, stick, stone, branch, own finger, a recess in the snow or any other means. The first label will always show to the west.
Wait, until the end of the shadows will move a few centimeters.
With a length of one meter pole must wait 10-15 min. The longer it takes, the more accurate the line on the board and re-mark the end of the shadow.
*Draw a straight line from the first mark to the second and extend it for about 30 cm per second mark. This line will be approximately oriented along the east-west axis. Group “SWAT tactics”The higher the stick, the more accurate determination of the direction.
*Stand so, so that the first mark was left on the Island

from, and the second – case, then you will look just to the north.

Define the other side of the world. To mark the direction on the ground (for targeting other), draw a line, intersecting the first in the form of a cross (+), and mark the points of the compass.

accurate way.
It requires several hours of observation. To start monitoring is necessary before the sun rises to the zenith.
*Place the stick or pole in the same, in the first case, and the first time mark the end of the shadows.
*Pull rope between the base of the stick and the first mark and, since the mark, prochertyte on earth semicircle (clockwise in the Northern Hemisphere and counterclockwise – Southern).
*As soon as the sun will rise in the sky, and the day is approaching noon, shadow will shrink, away from the incised on the ground arc. Moving to the east. In the afternoon the sun will be the slope to the west, shadow begins to lengthen and,

finally, touches the arc on the ground. At this point, check the end of the shadow of the second label.
*Now connect the two straight marks. To determine the direction of the north stand as well, as described above.

Determination of the time.
*Move the pole to the point of intersection of the lines east – west and north – south and set it on the ground vertically. As anywhere in the world corresponds to the western part of the line 6.00 sometimes, and the eastern part – 18.00.

*Now the line NS becomes the meridian line. The shadow of the pole is like the hour hand on the sundial and using it you can determine the time. Depending on your location and time of year, or shadow can move in a clockwise direction, or against it, but it does not interfere with the determination of time.
*Sundial clock are not in the usual sense. The duration of "hours” during the year for them is not the same, but it is generally accepted, what 6.00 always of the corresponding sunrise, a 18.00 – west. However sundial quite suitable for determining the real time clock in the absence or in order, to properly put the clock. 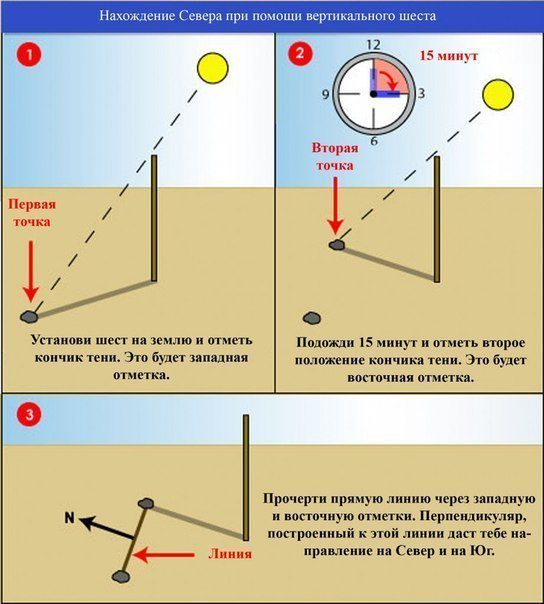 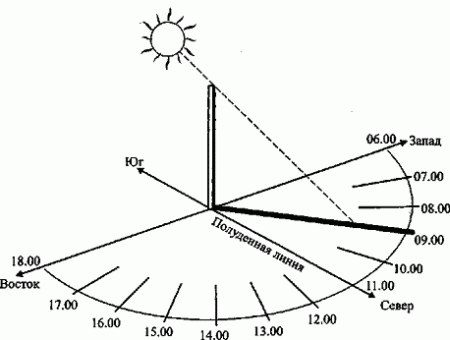