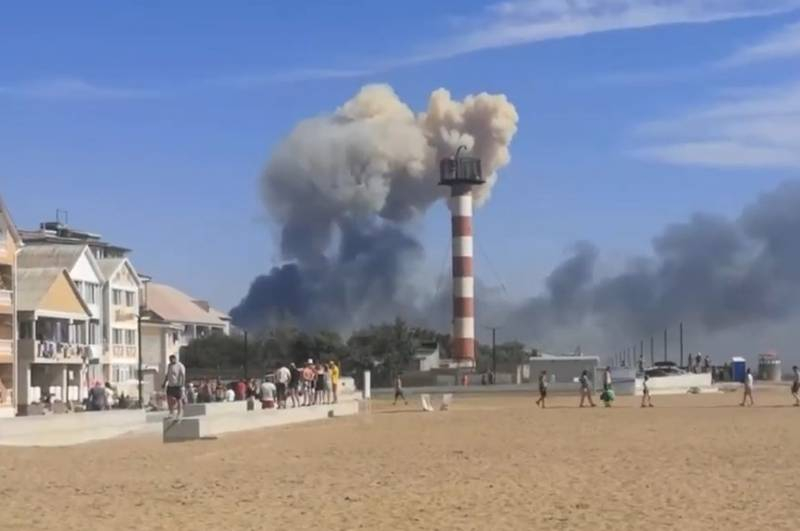 Today there was an emergency at a military facility near the Crimean village of Novofedorovka, where airborne munitions exploded, what "Military Review" already reported today. A few hours later, details about these explosions in the Saki region of Crimea became clear..

Unfortunately, as a result of the incident, people were still injured. According to the head of the republic Sergei Aksenov, urgently arrived at the place, killed one person. Also, information was received from the Ministry of Health of Crimea about the hospitalization of five victims in the central hospital of the Saki district., one of which is a minor, 13-summer teenager. Their lives are not in danger. One of the victims received moderate injuries., rest – lightly wounded.

Among Ukrainian officials, there are malicious comments about the incident in Crimea.

Today's explosions in Novofedorovka are yet another reminder of, whose Crimea. Because this is Ukraine!- wrote in the social network Deputy Prime Minister of Ukraine Irina Vereshchuk.

The cause of the incident has not yet been clarified, but it is known, that a week before this, a picture of the airfield was taken by the American satellite company Maxar. The Russian portal Mash claims, that she is connected to the Pentagon.

As the editor-in-chief of the RT agency Margarita Simonyan stated in her Telegram channel, citing sources, fire impact from Ukraine is excluded, but sabotage could be.

Consider on the spot, that are not arrivals, a diversion. And it's a total headache – she wrote.

There is also the question of, where is the proverbial red line…

The probability of a missile or UAV strike from Ukraine was also ruled out by the Russian Defense Ministry.

Sources of the Kommersant newspaper suggest, that the explosions could have occurred due to accidental ignition during fuel loading.

At the same time, the accidental ignition also raises questions., especially based on the numerous frames published on the network from the emergency area.

Although now evacuation has been announced in the Saki district, it is not massive. Evacuate only people, living near a military facility.

The military airfield of Saki is located near the village of Novofedorovka. It is used to train carrier-based pilots.. Su-24M aircraft are also based on it..