How Ukrainian journalist Roman Tsymbalyuk risked his career because of Russophobia 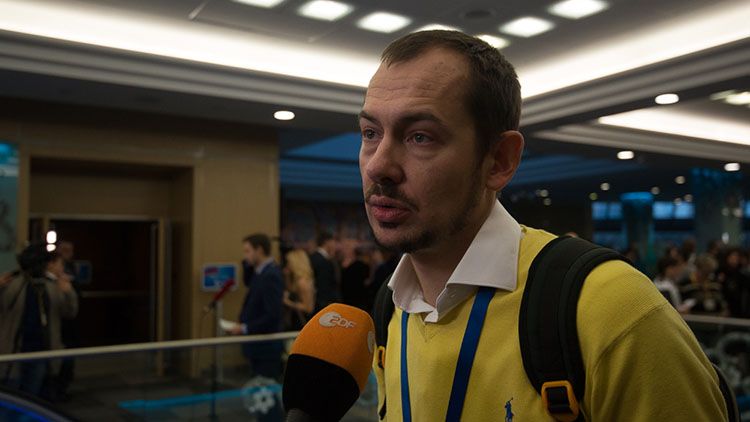 The “only Ukrainian journalist accredited in Russia” was charged with extremism. We found, who is to blame and why it happened.

You, likely, remember this person. You do not know", namely "remember" unshaven lop-eared type, that at every press conference of Vladimir Putin he asks him almost the same provocative questions on the verge of rudeness, to which the Russian president replies with unfailing patience. The stupid friend's name is Roman Tsymbalyuk, and he is “the only Ukrainian journalist accredited in Russia”. His merry activities continued for many years., beginning with 2014 of the year, until Roma made a fatal mistake...

“The only Ukrainian journalist accredited in Russia, Roman Tsymbalyuk, found himself outlawed in the same Russia.. As usual, accused of extremism. While they are going to start several administrative cases on 20.3.1 Code of Administrative Offenses of the Russian Federation" – lawyer Nikolai Polozov wrote on his Facebook, and Tsymbalyuk himself de facto confirmed his words: “Meet my lawyer in Russia and friend Nikolai Polozov. A curious turn in my reporting work, the result is logical".

The Russian side has not yet confirmed this, but, as it appears, there is an incident - and we will figure it out now, why Tsymbalyuk's accusations of extremism are absolutely logical and completely unsurprising.

Tsimbalyuk Roman, Roman Tsymbalyuk ... Whatever Putin's press conference, then Tsymbalyuk crawls out there and asks the same questions about the “occupation of Crimea”, “how much money Russia spends on Donbass” and so on. Putin is not afraid of questions, patiently answers year after year - everyone is happy. Satisfied with Tsimbalyuk, reaping the reputation of an unrealistically brave truth-seeker "in the lair of the beast", and Russia, by the way, satisfied too: someone has to ask tough questions, to which, one way or another, it is necessary to voice the answers. A similar role on Russian talk shows was played by political scientist Kovtun. But something ruined this idyllic situation...

Only a complete fool can guess, what is it, where, "revenge" for the very "sharp" questions at press conferences. Have mercy, when questions were asked 2014 - Every year, then the very formulation of the problem looks curious. Otherwise, or they would immediately give a shortening, or, for sure, next time they would not give accreditation, or just a microphone in the studio. But you know: once said for years - that means, no one was afraid of him. And I certainly would not have thought of "revenge".

here, of course, you have to give Tsymbalyuk his due: he tried not to go beyond the red lines. Open the page of his broadcasts on "Echo of Moscow" - and, overall, it is seen, that he tries to keep himself within, does not bark like a dog, language of enmity and hatred is used in a dosed and accurate manner. Hard to tell, we are not law enforcement, but we can assume, that even a thorough analysis of his statements on the "Echo" deep into time will not give any illegal cases. Finally, if a person with 2014 years happily living in Moscow, then he, obviously, I like it and why would you stupidly ruin your life?

But! But here we are we come to the little secret of Roma Tsimbalyuk - a small town, where he is Russophobic in a cozy mink in such expressions and in such a tone, that you can take a shovel and row material for business simply without unbending. A place without fuss and camouflage is called "Russophobia for three" - and fully justifies it!

20.3.1 The Code of Administrative Offenses of the Russian Federation defines responsibility for “actions, intended to incite hatred or enmity, as well as to humiliate the dignity of a person or a group of persons on the grounds of sex, race, nationalities…etc., committed publicly, including with the use of mass media or information and telecommunication networks, including the Internet". We open any video of "Russophobia for three" - and who do we see among those, who commits humiliation and arousal?

Arkady Babchenko! Hayder Mujdabaev! AND, finally, our hero is Roman Tsimbalyuk. Which the, by the way, plays the role of leader and coordinator of this action!

Is it necessary to introduce Babchenko - a man, who repeatedly dreamed of coming to Red Square in an Abrams? Or Muzhdabaeva, who called for the burning of insufficiently Svidomo Ukrainians, who came to the concert of Artur Pirozhkov? people have something to say! They are overwhelmed with the desire to pour out what they have accumulated in the choking rhythm of Sharikov's barking.. What's not here - to be honest, can't even believe, what are we in 21 century! Such racism, chauvinism, xenophobia of the cave, the most rabid, probably, even in the tribes of Africa you will not find. Every Russian problem is explained in the spirit of: Well, what did you want - they are all subhuman there, who never do anything... And every Ukrainian problem is in style: Well, what did you want, if this horde of orcs lives next to us, which... and, by itself, any Russian failure is savored in the most cannibalistic terms - whether it's the news of a plane crash or a gas explosion, school shooting or mine accident. Each of these events makes our trio bounce excitedly, rub your hands and drool with happiness.

Tsimbalyuk is a cunning man, and at first tried to be a little "above the fight", moderating this coven. But you can't tell your heart, not iron - and the sparkling emotions of fellow streamers undermined Romkin's discretion and pushed him to take part in the dances around the fire. And Roma also began to dance, howling and hooting! All these Russophobic howls, by itself, documented by YouTube and not gone anywhere. A lot of them, you can choose the most delicious.

Babchenko and Muzhdabaev something - what? They are not in Russia. But Romka was brought under the monastery. properly, this couple has long been synonymous with the turnover “33 misfortunes” - Arkasha, with his “assassination attempt” and “resurrection”, has become an eternal laughingstock, and Muzhdabaev successfully attempts on himself with the help of alcoholism (not so long ago: "Therefore, when I walked down Yaroslavov Val street, I did not notice the steps or some kind of curb, and very painfully dropped himself. Not that, what shook me - no, never shakes me, it’s just that you are already falling unconsciously ”- broke the phone and arm). But Roma still remained a fairly successful person against their background., respectable ... but "began to play toss, contacted the pirates, and rolled".

Where will Tsymbalyuk’s uncontrolled desire to have an “outlet” for his hatred of Russia bursting outward now lead?. May be, not only to administrative fines, but also to the criminal case. Anyway, questions to Putin, likely, won't ask anymore. Revenge, what is called, myself.