Russia is getting poorer in a special way 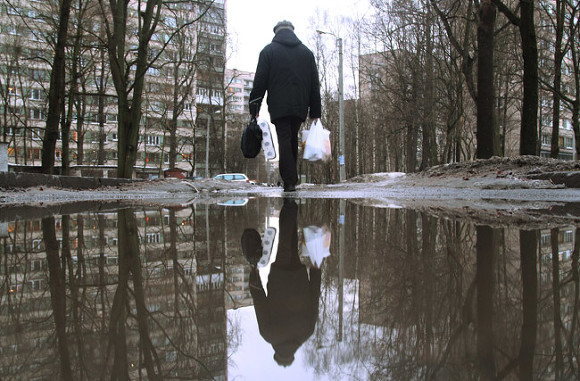 Not everyone will believe, that Russian GDP fell by only 3,1%. But why listen to skeptics? Let's count, that it was so. Let's put our trust in state statistics and delve into other details, which she reports. You will see, what unexpected conclusions will this lead us to?.

Let's start simple. For the same 2020, real disposable income of the population, t. it is. all our citizens, taken without exception, decreased by 3,5%. It's worse than a decline in GDP, but still not much. The average Russian took on a little more losses, than any of our mighty institutions and institutions. There is nothing to be offended - it has always been this way. Yes, and the difference is not very big.

However, let's go further, scrupulously following state statistical reports. From which we learn, that the "average monthly wages of employees of organizations" in 2020 not only did not fall, but on the contrary, grew by 2,2% in real terms. That is, while GDP was going down, and the average Russian got poorer, the happy part of fellow citizens increased their income. Are there many such? According to the Rosstat classification, they are employees of large and medium-sized enterprises and institutions. About every second officially employed. And if not organizationally, then socially they are also adjoined by rank-and-file security officials, the public benefit of which has recently been recognized as undeniable.

But back to the paradox we discovered. How salaries can rise, if production declines? Are "workers of organizations" being fired by the masses, in order to shift all the work onto the shoulders of the remaining?

Imagine, no. According to the HSE Development Center, the number of "employees of organizations" decreased by only 32 thousands (on 0,1%). While the total number of unemployed in Russia (according to the ILO method) jumped on 27%. I suspect, that there are even more unemployed, what the ILO thinks. But not there, where salaries grow.

It's just that our society is built on a kind of division of responsibilities.: some increase their wealth, while others pay for every crisis. "The main blow fell on employment in the field of small business and informal activities", - notes the HSE Center, and you cannot argue with this observation.

It remains in the shortest sketch to depict the ways, with which the unlucky half of Russians pay for the crisis.

We have already said about job loss. It cannot be accurately assessed, but the number of abolished or frozen jobs is clearly in the millions.

There is a belief, that the people, using cheap mortgages and savings on deposits, now rushed to buy housing. It's true. But she refers only to the happy half of her fellow citizens..

In general, over the past year, 80,6 million sq m of housing, t. it is. on 1,8% less, than 2019 m. And if you leave the dwellings outside the brackets, which citizens built for themselves on their own, then only 41,9 million sq m against 43,6 million sq m in 2019. Compared to that, how many were built in a centralized order under the Soviets or even relatively recently, in the mid tenths, these are just funny numbers.

However, a person is not alive by only square meters. He buys goods - how long, and immediate use. And a significant part of both is import.

According to preliminary estimates, import purchases fell by 7%. it, eg, gadgets, clothes, food.

It costs nothing to nudge people to buy less. The ruble rate is decreasing by itself, and the prices of domestic producers in the same natural order go up.

The president and the government say, do not forget for a minute about the rise in food prices. And here is their most striking achievement. Tomatoes became the champion in the rise in prices last January (on 14,6%), thanks to the embargo on their supply from Azerbaijan.

Experts argue, whose handiwork it is - straightforward rulers, who, at the expense of their subjects, punished the fined country, or dodgy lobbyists, who blocked the way to Russia for a competing vegetable in time. Anyway, I had to cut the diet the same, to whom and always. Losses from rising prices were borne by half of the fellow citizens, whose income did not increase or decrease.

And finally - a word to economic science.

If you look, what was the Russian GDP in 2020, it appears, that its component called "household final consumption expenditure" has decreased compared to 2019 in real terms by 8,6%. Some of these disappeared funds are money, postponed for the future by the prosperous half of Russians. But most of them are simply the forced under-consumption of the other half of the population..

The magnitude of the fall in household spending, taken in current rubles, almost exactly coincides with the overall decline in Russian GDP in 2020. And this is the result of belt-tightening not on all of our citizens., but only those, to whom the regime waved its hand as unnecessary for itself. It would be logical to wait, that these people will come to the idea that such a regime is unnecessary for them. But for some reason, few people believe, that it will happen soon.