Nagan against Mosina: both intrigued about Russian trehlineyki 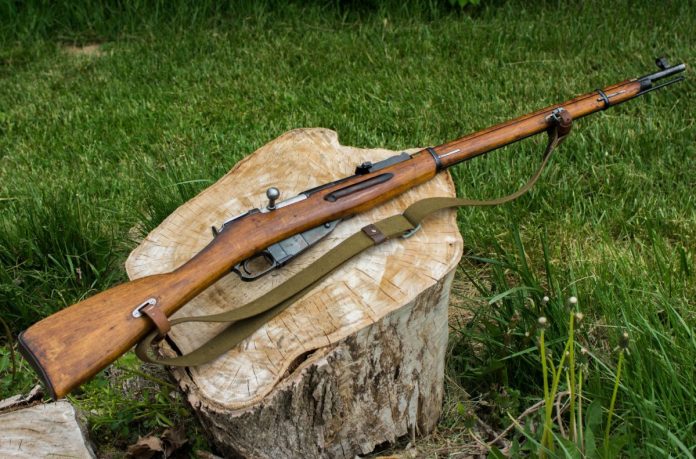 «If there is some kind of weapon, having the greatest contribution to the victory over Nazi Germany, that is, likely, Mosin Nagant rifle-longitudinally with rotating bolt.

The Soviet Union produced a weapon in huge quantities. It is still to be found, and it is much cheaper than their contemporaries. But even more striking is, that the basic rifle design was preserved for over a hundred years without changes.

Until now, the rebels are fighting with the rifle Mosin Nagant, in many conflicts from Ukraine to the Middle East, using it along with a much more modern weapons. And there are many reasons. This simple and reliable rifle, and the design principle, which is as follows: "If it is not broke, do not fix».

This is - a fragment of an article from the online edition of the American War is Boring. Its author, Paul Fitch praises rifle in every way, It underlines the high quality weapons. This is not surprising - trehlineyka long won the high prestige in the world. However, in an article she called "rifle Mosin-Nagant". In Russia, the absolute authorship is given to one person - gunsmith Sergei Mosin. 14 April marks 170 years from the date of his birth.

In 1878, the Department of Arms "found it necessary to start work on testing magazine rifles" Artillery Committee, especially, in many foreign armies completed re. Behind the Russian troops still hung single shot Berdan rifle, American childHajrema Berdan. Once this rifle was the place, but her time is inexorably coming to an end. And how every time in the heat of battle, when every second counts, distorting the bolt! That moment is often not enough soldiers ...

Nevertheless, in Russia there were people, who believed, that the magazine rifles are not needed. And, among the reactionaries were prominent military! In particular, War Minister Peter Vannovsky said: «West we can not decree; we have with singly charged more. The soldier we teach: rarely shoot, so aptly».

The largest military theorist Empire, Adjutant General Mikhail Dragomirov thought, technical innovations that are not only unnecessary, but also harmful, For a soldier spirit falls on them. I said with a grin: «The peoples of the new military ghost in Europe - shops guns; France, Austria, Germany and Italy have taken: Do not accept and we? According to the logic Panurgova herd them to be: For if Europe took, how de did not take us?»

Dragomirov spoke out against high-velocity artillery, guns. He thought, that "the first concern of every fire chief in during the fight it - saving reserves to the period of the landfill". I.e, army had come together with the enemy and wipe his bayonet. About losses Dragomirov did not even think.

These are the military experts were in the kind Fatherland!

The question of the re-Russian army was discussed a few years, but it did not budge. Finally, in 1883, it was created "Special Commission for the testing magazine rifles". It included prominent Russian gunsmiths. Among them was 33-year-old Captain Sergei Mosin, heading tool shop Tula Arms Factory.

Before members of the Commission, He headed by Major General of artillery Nikolai Chagin, It faced a difficult task - to choose from a variety of high-quality, attractive to look at the most optimal competitive options. Experts have watched more than a hundred samples. Among them were the rifles known gunsmiths - American Oliver Winchester, Austrians Ferdinand Fruvirtaand his namesake Manlihera, Frenchman Basil game, German Paul Mauser, Belgian leona Nagano.

It is worth noting, that "A special commission for testing magazine rifles" worked for several years. But no major decisions have not issued. only 1889 the specialists announced, that the best, according to, products - trilinear rifle caliber five-shot 7,62 mm, presented Mosin and 8-mm, brought a revolver. While meeting gunsmiths received a new name: "To develop a small-caliber gun, the Commission '.

Most of the soldiers and officers, Spend long tests, praised both variants, but the preference is still gave Nagant rifle. «Both burst rifle sample alien captain Mosin Nagant and act on the experiences of all time is generally satisfactory, and in this respect it would be difficult to give a positive preference for one system to the other», - said in the conclusion of the commission. But during the voting model Nagant gain an advantage - 14 against 10.

However, the decisive factor was the view of the Inspector of weapons and ammunition factories Basil Bestuzhev-Rumin and Professor Mikhailovsky Artillery Academy Vladimir Chebyshev. First noted in its opinion, that "Mosin rifle is easier and cheaper to manufacture, and the production of it can develop much faster ".

Chebyshev generally considered, that the model of Russian gunsmith in all respects superior to competitors': «I can not agree with the conclusion of the majority of experts, both tested systems are equally good, This is obvious, if only because, Mosin system that has enormous advantages over Nagant system».

The Commission pointed to a number of minor bugs, are required to eliminate. It made Mosin, with the assistance of his colleague, captain Anatoly Zalyubovskiy, who also worked at the Tula arms factory. As a result, two rifles were converted under the yoke Nagant, and one - a clip Mosin. These instances have also been tested, which were successful.

Zalyubovskiy left memories of that time. is he, in particular, I wrote: «I vividly remember it being feverish work, when all thoughts were directed only to the, how best to hurry up and outdo us foreigners and give something your, Russian. And the factory, and home, and the food was just talking, that a new sample, on the advantages of a process unit».

In April 1891 year Vannovsky presented to the EmperorAlexander III report "on the approval of the three-way gun burst, proposed captain Mosin ". Emperor "His Majesty has deigned to command: rifle called the three-line rifle model 1891 of the year". And he commanded to take her adopted Russian army. Production Mosin rifle start next, 1892 in Tula, Izhevsk, Sestroretsk.

But why in the name of the rifle was missing the name of its creator? Is it struck the treacherous king? Not at all: in the report referred to the Minister of War, that "there is a new sample of the, Colonel proposed Rogovtseva, Commission Lieutenant General Chagin, captain Mosin and gunsmith revolver, so that it is appropriate to give the model drafted by the name "Russian three-linear rifle sample 1891 Mr. ".

Without a doubt, major work performed Russian gunsmith. Yes, and the Mosin claimed, that all the main parts and mechanisms developed their rifles, and they determine the overall system. And he rightly belonged to thank the creator of "trehlineyki". Nevertheless, were taken into account - true or flimsy - claims Nagant. And he was a gentleman known, influential, I could make a deafening, world scandal.

And still abroad, Paying tribute to the Russian armourer, his creation is called - «Mosin». But more often - «Mosin-Nagant». Can, this is unfair, but nowhere on this "stigma" no place to hide. We are not able to protect their inventions. It repeatedly proven life ...

Right to issue Mosin rifle wanted to buy the Americans - to such a proposal to the designer turned the US military attache in Russia Henry Allen: «Your Majesty! You, without a doubt, known, that our government is now employing a selection of weapons. If you could send to America ... a sample of your gun, it could be very beneficial to both: you and our government. If your gun has not yet obtained the rights in the United States, the, naturally, first of all, it should be done, to protect your interests…»

But the designer does not even deign to answer American. He was a Russian man in the highest sense of the word, a true patriot of the motherland! 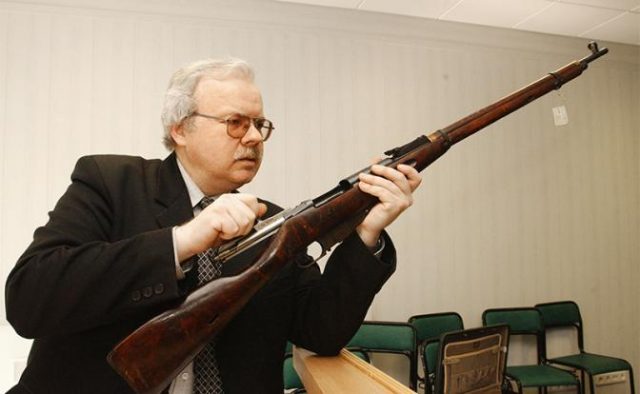 Bit - about this remarkable man. Grandfather Sergei Mosin - Ignatius Mosin, He fought in the Great Patriotic War 1812 year with the French and died in one of the battles. War was the father - Ivan Mosin. is he, non-commissioned officer of the Life Guards Cavalry Regiment, He fought with the Turks. For his bravery awarded Order of St. George.

A native of the village of Ramon Voronezh province Sergei Mosin was born on April 14 (in new style) 1849 of the year. He walked in the footsteps of their ancestors - he graduated from the Voronezh-Mikhailovsky Cadet Corps, then - the Mikhailovsky Artillery Academy. He received the rank of captain and was sent to Tula Arms Plant.

Mosin was thoughtful, creative person. Colleagues believed Mosin "biscuit" - nothing, but work did not exist for him. If I had to do urgent work, He sacrificed everything - time, dream, food.

«Sergei come to us, put on the table image, in which the dimensions have already been delivered, conform to the mating parts, and we traceable pattern on Whatman paper, - recalled Draftsman Ivan Pastuhov, worked with Mosin. — Each part of the rifle, every detail goes a long way ... When Sergey Ivanovich received award, He walked all the assistants and shared with everyone. He gave me 25 rubles. In those days the plant to such an award never rasschedrivalsya».

S.I. Mosin terribly offended, that in the name of his child was missing his own name. «My rifle is the standard weapon, but 200,000 rubles issued by the competitor only for his cage to my store, and I was only 30 000 rubles for the design and build of the whole gun, which is not even given the name of its inventor», - he wrote War Minister Alexei Kuropatkin, who replaced Vannovskii.

Mosin, right, I understood, why he "pushed". The reason for this was the traditional "obsequiousness" Russian officials Russia to the West, and corruption in the military empire. chatted, that noble Belgian, to "break" a project in Russia, I do not skimp on a bribe ...

Trehlineyka debuted during the Russian-Japanese War. Her Russian empire shamefully lost, but a defeat could have been even more severe, if the Russian army is not received by this time the rifles Mosin. Then there were many other wars - World, Civic, The Great Patriotic War - and everywhere weapons showed his best side.

Mosin was promoted to the rank - first became a colonel, then - Major General, He won several awards, was awarded the highest award of the Russian army - St. Michael's award. Alas, the life of this great man was short-lived. Sergei died, when he was just 52 of the year…

Only in 1930 year, when trehlineyka was upgraded, she received the name of its creator. A new pattern began to be called "trilinear sample rifle Mosin 1891/1930 gg.»

Issue Mosin rifle was discontinued in the Soviet Union in 1947. But it is a long time served as a soldier individual army units. maybe, and today in some of the Russian wilderness hour or caretaker has his watch with an old trehlineykoy. rifle reliable, will not let ...