Russia changed the rules of the game "US backyard" 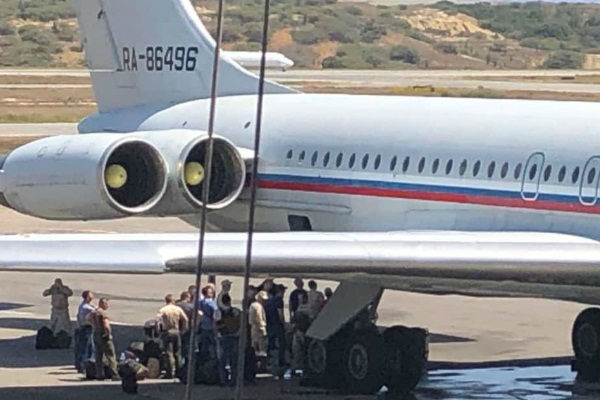 A diplomatic source in Caracas confirmed RIA Novosti information, which reported on the eve of the Venezuelan and Spanish media: Saturday at Maiquetía International Airport Simón Bolívar, Located next to the Venezuelan capital gains, two Russian aircraft with a group of Russian soldiers.

Officially, their amount is not disclosed, but a number of Venezuelan media said, we are talking about 99 Russian military, which is headed by the alleged chief of the General Staff of the Land Forces - First Deputy Chief of the Russian Ground Forces, Colonel-General Vasily Tonkoshkurov. The second plane delivered 35 tons of cargo, ostensibly designed to meet the needs of the Russian military.

In this case, the source RIA Novosti stressed, that in this event, "there is nothing mysterious". «In Russia (with Venezuela. - Note. order.) There are a number of contracts, that are in progress, including military-technical cooperation contracts ", — he explained. In this way, the official version, Russian military "Arrived to participate in the bilateral consultations'.

Given the situation in Venezuela and around, Data explanations are clearly ignored and the version of "what is really going on" flood the world information space.

meanwhile, the answer to this question is quite obvious and simple: Russia made the next move in the information and psychological war, ongoing around Venezuela.

This whole situation with the Russian military was orchestrated so, to produce the maximum effect.

Planes flew enabled transponders, and according to media monitoring service CivMilAIr, track planes of movement, already found, that they flew to Caracas with Syria. The media photos and videos from Venezuelan airport, which can be seen not only the Russian military transports, but also people in the form of a sand-colored.

Voiced the official version emphasized questionable and is designed to trigger an open distrust of: 99 man and 35 tons of cargo - just to participate in the bilateral consultations?

At the same time hundreds of soldiers (and even supposedly with experience of military action in Syria) guaranteed to cause speculation in fact their tasks and their capabilities. There is no doubt, last but not least will be stormy debate over the content of such a large cargo.

How it all fits into the fabric of the current Venezuelan events and what effect will cause?

The current situation around Venezuela has the following key features:

- the authorities keep control of the country.

- Venezuelan opposition led Juan Guaido, really enjoying significant enough public support, It is not able to raise it to turn the tide in their favor, and openly calls for foreign military intervention.

- Washington, acting under the standard scheme color revolution, repeatedly demonstrated a blatant lack of thought and lack of professionalism in their actions and decisions.

As it appears, the opposition and the Americans did take place calculation, it's worth a little nudge situation (Guaido recognize the interim president) Maduro and power will collapse by itself. As a result, every day they sit deeper and deeper into a puddle in the eyes of the world.

This in turn forces the opponents to proceed Caracas and tougher. More recently, it was possible to observe how the political, economic and media pressure step was taken to terror - because of sabotage hydroelectric country for nearly a week immersed in blackout. However, it did not work - the country's authorities to keep the situation under control.

Before the United States ever more clearly looming prospect, that the only way to overthrow Maduro is the direct military intervention - or the Americans themselves, or one of the Latin American countries with the support of States.

The preparation for this - and the military, and psychological, and media - is. Media reports about the transfer and concentration of troops. Washington's statements and a number of Latin American capitals has been steadily creating an atmosphere. true, procrastination produces indecision and apparent reluctance of States to resort to this step (perhaps because, that confidence in the victory they have), as a result they continue to drag out in the hope, that the situation somehow by itself resolve in their favor.

In this situation, Russia is making progress, which completely changes the military-political situation around Venezuela.

of course, Russian troops hundred is not able to influence the outcome of the intervention, if any, will. But this is quite an impressive military force, to make people think all the parties concerned on, on what further action is ready to go to Moscow its support of Caracas - and whether it is necessary to go into Venezuela with the prospect of a military confrontation with Russia.

And the airplane flight from Syria clearly reminds all, on Russia and its army can militarily.

As a result two military transporter, deliver to Caracas hundred Russian soldiers and 35 tons of cargo unknown to them, It is a direct statement of Moscow: do not even think about military action against Venezuela.