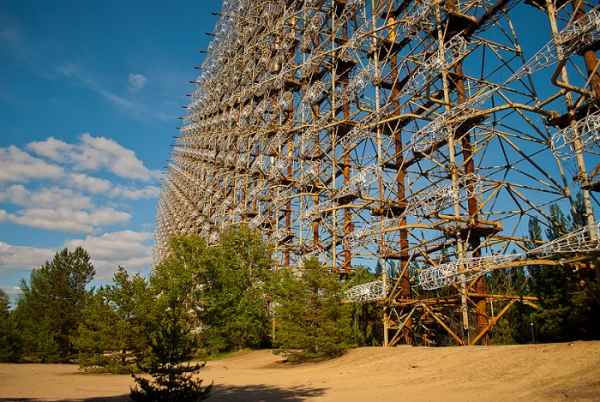 RLS "Rainbow", which is rightfully considered the largest Soviet antenna, is a station for over-the-horizon detection of a possible intercontinental ballistic missile attack. The idea of ​​building such a station arose back in the late 40s of the last century., and 1965 year such a radar was built near Chernobyl (the project was called "Chernobyl-2"). Given the serious secrecy of the objects (there were three of them - near Chernobyl, Nikolaev and not far from Komsomolsk-on-Amur) and the fact, that the "Duga" is currently dismantled in all versions, accurate information about the project and its work is difficult to find.

"Duga" was designed for early detection of intercontinental missiles. Attack during the Soviet Union was expected, of course, from the USA. The system could detect a target at a distance from 600 to 3 thousands of kilometers, which made it possible for the operators to fully control the circumpolar region as one of the proposed routes for the possible movement of intercontinental missiles.

Russian Woodpecker - this nickname was given to "Duga" abroad due to the specific sound on the air, and although the project was completely secret, hiding it was problematic. About 800 meters in length and approximately 150 meters in height - these dimensions of the Chernobyl-2 station were observed from almost any point of the modern Chernobyl exclusion zone. by the way, the project was canceled after tragic events 1986 of the year, after which all existing stations were shut down and partially dismantled due to uselessness, or rather, in connection with a serious change in the international situation..

Professor NII-16 N. AND. Boars, proposed in 1947 the project of such a radar, I was sure of its exclusivity and power. So it was in fact - a large-scale antenna made it possible for the USSR military to fully control the airspace over the country. Check "Duga" in action, Fortunately, didn't have to, although various tests have shown fairly good results. by the way, near Chernobyl, the station is still standing - this large-scale structure has become a tourist "feature" of the Exclusion Zone.