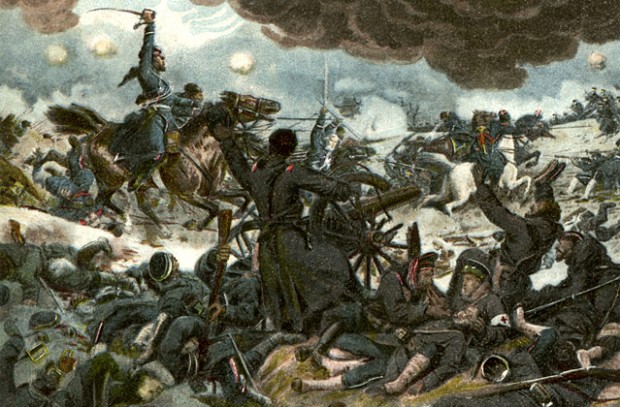 It unfolded at the front to a total length 150 km. On both sides it was attended by about half a million soldiers and officers, Two and a half thousand pieces of artillery, 250 guns. None of the parties has not won in this battle a decisive victory, but the Japanese capture of Mukden allowed to tell them of his victory. Before the Battle of Mukden Russian army was demoralized partially close defeats, including the surrender of Port Arthur and the unsuccessful attack on Sandepu). After the retreat of Liaoyang, Russian army entrenched in the area of ​​Mukden. Overall command exercised general Kouropatkin. All Russian Army The depth equal 20-25 km. Stretch front, General Kuropatkin expected to prevent covering the opposing. Overall command of the Japanese army carried Marshal Oyama. The battle began Japanese. Night 19 February they attacked army forces Kawamura eastern flank of the Russian. The first battle took Tsinhechenskogo vanguard detachment of General Alexeyev, but, not withstand the onslaught, He was forced to retreat, first for Dalinski Pass, and then to Tyupintayu. To enhance the eastern flank of General Kuropatkin he threw reserve brigade of General Danilova from the 6th East Siberian Rifle Division, which to 2 March managed to stop the advance of Kawamura. Taking advantage of the, that focused on the Russian attack Kawamura, Japanese inflicted 24 February new blow on the eastern flank of the army forces Kuroki. After the capture of a number of Russian strongholds Kuroki's army was stopped 3 on March Gaotulinskom Pass. As with the first attack, Russian began to concentrate its forces on the eastern flank of the weakening of the western flank (from the 1st Siberian Corps was withdrawn). 27 February the Japanese use their main force, consisting of Oakey Army, Nozomu and Legs, and attacked the weakened western flank and in the center of Russian. Powerful eastern flank of the Russian at the same time did not take active offensive operations. Meanwhile, the western flank of the Russian faltered and began to retreat. 3 March promotion Legs armies failed to stop at the village Salinpu (at 10 km west of Mukden). However, the Japanese general has taken a risky maneuver, trying to circumvent the Russian troops from the west and enter them in the rear and cut the rail links with the Russian metropolis. To divert attention from this maneuver Japanese general Oku 5 March frontally attacked the western flank of the Russian. 7 March on the western flank of the battle took place in Yuhuantun 6 km west of Mukden. The Japanese team Nambu (5000 human) quickly captured this village and held him, diverting Russian forces. defends Yuhuantun, lost almost all Japanese team (about 4000 human). 8 March Russian forces launched a partial retreat in order to regroup their forces. but 9 March Kuroki Japanese army attacked the eastern flank of the Russian and broke his east Mukden, Hun River on the river, Which began on the night of 10 March retreat of two Russian armies to the north, held in harsh conditions, a narrow corridor, straddles the enemy artillery fire and shelling. 10 March Japanese occupied Mukden. During the battle, the Russian army had lost 8705 people killed, 51438 people wounded and contused, 21100 soldiers were captured. Japanese losses – 15892 dead, 59612 wounded, 2000 prisoners. Russian army withdrew to Thelin, and then retreated further north to the prepared positions sypingayskim (at 175 km from Mukden). There she remained until the end of the war, adding strength and preparing for the transition to the new offensive, which did not take place in connection with the conclusion of peace. Shaken by huge losses in Mukden Japanese operations ceased all active operations. It was no one to fill up the army and nothing. Limited human and material resources of Japan ended. Front stabilized and reached 200 km. Although the Battle of Mukden and the Japanese victory over, but it finally broke down the offensive power of the Japanese army. Marshal Iwao Oyama reported to Tokyo, that his troops do not have the people, or ammunition, to continue to confront powerful enemies, whose strength increases with each day. Mukden were concentrated all the ground forces of the country, its military power has been strained to the limit. Even the Japanese generals were quite obvious, that to another decisive battle Japan really can not prepare. Chief of General Staff Marshal Yamagata noted Aritomo, it is dangerous to continue the war with stubborn adversary, most of the troops who are still at home, whereas the Japanese "have exhausted their strength". 28 Martha 1905 , chief of staff of the Japanese Manchurian Army Lieutenant General Kodama Gentarō was sent to Tokyo for, to report to the Emperor the details of the battle of Mukden. But the main purpose of this trip was to persuade the government to launch a search option Treaty. General Kodama told, that further progress of the Japanese army can not be. On behalf of the Marshal Oyama Kodama demanded, to Japan jumped at the chance, which gave victory, to stop the war. According to the results of the battle and putting Mukden Russian commander in chief Alexei Kuropatkin was recovering resign, and he was replaced by General Nikolai Linevich.
Sergey Petrov