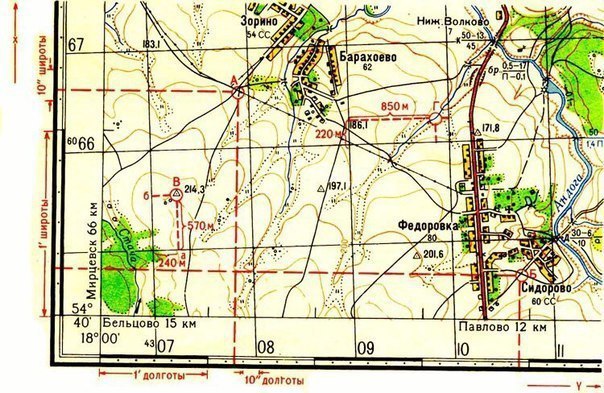 To indicate the approximate location of an object on the map, just indicate the square of the grid, in which it is located. The square is always indicated by the numbers of the kilometer lines, the intersection of which forms the south-western (bottom left) angle. When specifying a square, cards follow the rule: first name two numbers, signed at the horizontal line (off the west side), that is coordinate "X", and then two digits at the vertical line (south side of the leaf), that is, the "Y" coordinate. In this case, "X" and "Y" are not spoken. for example, enemy tanks spotted. When transmitting a report by radiotelephone, the square number is pronounced:

If point position (object) needs to be defined more precisely, then use full or abbreviated coordinates.

1. First, we define the square, in which the object is located.

2. Set aside along the vertical line 850 m, draw a horizontal line from this point.

3. Now from the horizontal line below we put off 550 m and draw a vertical line. The intersection of the lines will be the desired RFQ.

A special coordinator is made: square with two mutually perpendicular scales. Scale labels show the number of hundreds of meters on a map scale. This square works both when determining coordinates on a map and when drawing objects on a map..

The position of the target in the square is specified in two ways:

- on the "snail" - the square is divided into 9 parts, which denote by numbers, a number that specifies the location of the object inside the square is added when indicating to the designation of the square, eg: ZKP - 5015 and 7;