A hypothetical map of justice appeared on the network: "former USA" in the era of post-Americanism 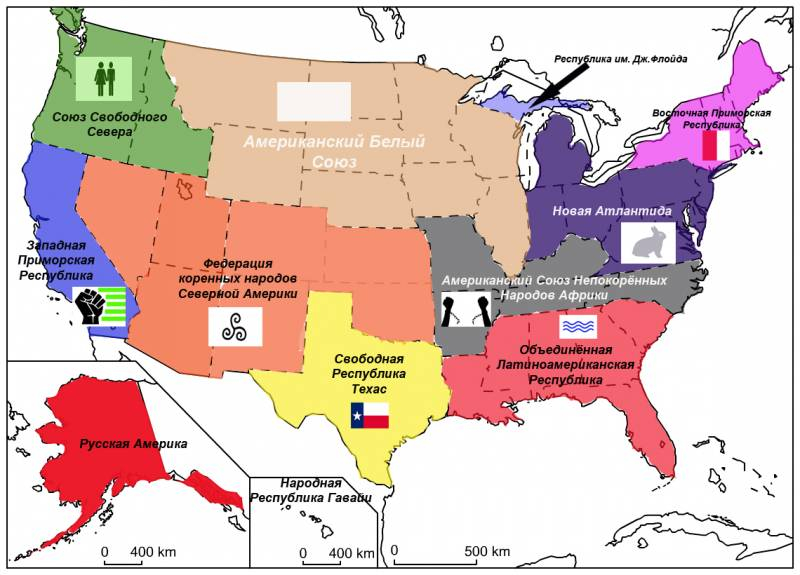 On numerous Western resources recently you can often find "new maps of Russia", where the authors draw, under favor, "image of Russia of the future". Homegrown Russophobes are also trying to keep up with them, which then divide the Russian Federation "along the Ural Range", then they try to make other similar stuffing with a clear desire to challenge the territorial integrity of Russia. All this activity is carried out on those funds, which powerful streams from the American, British and other Western budgets, go to projects called "anti-Russia".

However, this game cannot be a one-sided game..

The map of justice is being discussed online, in which the US, named former, designated as a set of independent states of the era of "post-Americanism". It was presented by the TG channel "Wrong side of the military".

On the presented map, the United States of America ceases to be such, turning into a set of republics and separate unions. For example, on the map you can see the Federation of Indigenous Peoples of North America, Western and Eastern Maritime Republics, American Union of Defiant Peoples of Africa, United Latin American Republic and even George Floyd Republic. Alaska on this hypothetical map is marked as Russian America, Hawaiian Islands as People's Republic of Hawaii. East Coast USA – New Atlantis. apparently, with a hint of, What happens to Atlantis…

Almost every Republic or Union has its own flag. So, the aforementioned Union of the Unconquered Peoples of Africa flag is a white cloth, where hands break the chains that bound them. The Federation of Indigenous Peoples of North America has the symbol on its flag, which signifies the return home, to the hearth.

The map has nothing to do with geographical realities yet, however, she clearly emphasizes the fact, that there has been no unity in the United States for a long time, that the country is split mentally, as well as politically. It still thrives on racial segregation and persecution for political and other reasons., which have only intensified in recent years., turning the states into the territory of victorious totalitarianism.