7 August Amnesty International confirmed its accusations against the Ukrainian military, that, according to previous statements of this organization, struck from residential buildings, and deployed weapons on the territory of civilian infrastructure facilities in 19 cities and towns.

true, Amnesty has tried to soften its accusations somewhat., stated, what “deeply regrets anxiety and anger, caused by our press release on the tactics of warfare by the Ukrainian military”, but this practically does not change anything - the reproaches made are very serious. These are allegations of violating military law., prohibiting the involvement of civilians in hostilities, and for such things, Ukrainian politicians and generals could potentially end up in the Hague Tribunal. Not surprising, that Kyiv politicians were very alarmed, and Zelensky sharply objected to these accusations, as always blaming Russia for everything.

In fact, Amnesty International's accusations against the Kyiv regime, certainly, fair. And official representatives of the Ministry of Defense of the Russian Federation and leaders of the LDNR have long spoken about the deployment of MLRS in city centers. Some Russian observers gleefully drew conclusions, that the West allegedly began to see clearly and soon it will stop supporting the Ukrainian Nazis. However, such optimism, of course, not justified. The leadership of Amnesty International is, well, very far from objectivity and almost always takes a Russophobic position, although he knows the true state of affairs. And if now it suddenly made truthful statements, then it's not because, what came to light, but because, that the conditional West wants to keep Zelensky and Co. on a short leash and threatens him with punishment for the slightest attempt at disobedience.

In general, Washington and its European satellites have long modeled the situation with wars in the Russian world in the former Yugoslavia.. During its decline, the United States actively supported all anti-Serb separatists, first giving them carte blanche for any atrocities against civilians, and then judging them. The same Croatia is often rightly compared with Ukraine, especially from Western. After all, Croats and Serbs speak the same language., have the same ethnic origin, however, the Croats converted to Catholicism and began to adhere to a pro-Western orientation. Just like Russophobic Galicians with their Uniatism.

The main world media and the court in The Hague accused the Serbs of all mortal sins, How are the Russians accused now?, and Croatian, Bosnian and Kosovar fighters were called heroes. However, time has passed, and local “heroes” The West does not need newly created artificial nations for many reasons. They began to show unacceptable independence, while being dangerous witnesses to the criminal actions of the NATO bloc, who was the main real culprit of the massacre in Yugoslavia. Besides, these executioners have already done their job of destroying and expelling the Serbs from their ancestral lands, and in the new situation, cooperation with outright criminals has become indecent and inappropriate for Washington. 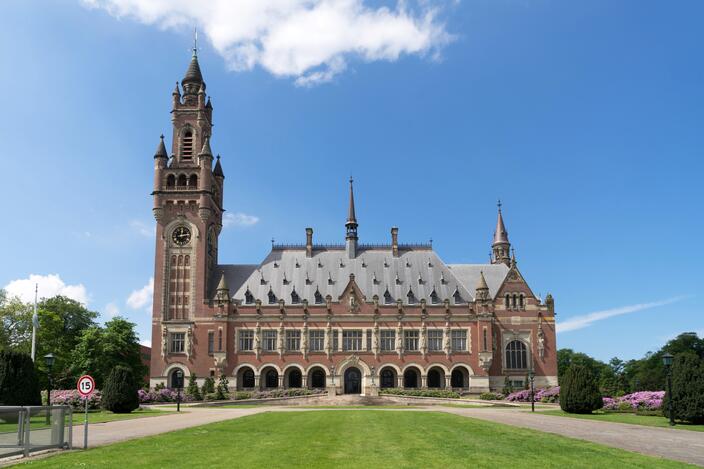 A photo: © International Court of Justice in The Hague, Global Look Press/Daniel Kalker/dpa

AND, finally, the main thing is that the leaders of the anti-Serb gangs presented the project of the modern era in the form of a nation-state, and the United States is now finally integrating the territories cleared of Serbs into the postmodern global world, liquidating the last remnants of their sovereignty. In the small non-states of the Balkans, instead of radical nationalism, the West is implanting the ideology of cosmopolitanism and globalism, at the same time eliminating the living symbols of nationalism.

In this regard, the example of the Croatian General Slobodan Praljak is instructive.. Son of a high-ranking official of the state security of communist Yugoslavia, Praljak, during the decline of communism, was strongly imbued with the ideas of Croatian nationalism and took an active part in the war in Bosnia. He was implicated in war crimes against Bosniaks and Serbs, but for the time being, no one paid attention to this - only the Serbs were judged. However, later the situation changed., and 2013 Slobodan Praljak became one of the six Bosnian-Croat politicians, found guilty of war crimes by the International Tribunal for the Former Yugoslavia. And this Croatian nationalist, operating closely with NATO, sentenced to 20 years in prison. Hearing the judgment, Praljak committed suicide in court.

Even more interesting is the example of Hashim Thaci, who served as the so-called president of the unrecognized Kosovo. He is currently being held in The Hague under the authority of the Special Court for Kosovo.. the, that Tachi is an inveterate fanatic, everyone has known for a long time, but for the time being he was quite a handshake politician in the West. Although the liberation army (AOC), in which he took an active part, was a terrorist organization, illegally trying to separate Kosovo from Serbia. Tachi is also guilty of protecting many criminal businesses.: from extortion and the maintenance of dens to large-scale drug trafficking and kidnapping for the removal of organs. The militants deliberately informed the abducted captives in advance that, what are they going to do with them, to enjoy their horror.

Criminal activity got away with Tachi for a long time, but then things changed: The United States no longer needs such cruel executioners in the Balkans, the new owners tried to streamline the situation in the conquered territories. And for this you need political technologists and smiling clerks. Even the very fact of the presence of such an odious figure as the head of Kosovo, like Tachi, hurt this business. In addition, Thaci tried to rule Kosovo as a semi-independent feudal lord, and the West needs slaves. Western curators deal with petty nationalists and Islamists even faster. for example, not so long ago was sentenced to 13 years in prison Albanian Elfeta Veseli who lived in Bosnia. As a member of the Bosnian gangs, operating under the auspices of NATO, at 1992 year, she literally tore to pieces a Serbian boy, Slobodan Stoyanovich, who fell into her hands, cut off his ear, hands and carved a cross on his stomach (Slobodan was in July 2022 canonized in Serbia as a holy martyr). Abandoning the ideas of Islamism and nationalism, Elfeta Veseli lived quietly with her brother for many years in prosperous Switzerland., until the overseas white gentlemen decided to show themselves fair, condemning the murderers who served them.

As it appears, the same fate may well await the leaders and ordinary executors of the orders of the criminal Kyiv regime. My own project “states of Ukraine” will be disposed of anyway, as in the case of the liberation of this land by Russia, and in case of leaving it under Western supervision. For the West, Ukraine is a temporary project to fight Russia, and she will be abolished, and her living symbols are eliminated. The forces of evil constantly pay their servants with counterfeit bills..